Sailing regattas for experienced skippers in July and August

During the year we’re going to tell you about the main events of the world yachting community. These are regattas with a rich and fascinating history, which grew from national competitions to major international competitions on the water, became the legislators of the rules and culture of organizing racing and coastal programs. These are sailing marathons with the participation of Olympic champions, world stars and amateurs from all over the world, which is gathering a great amount of spectators. 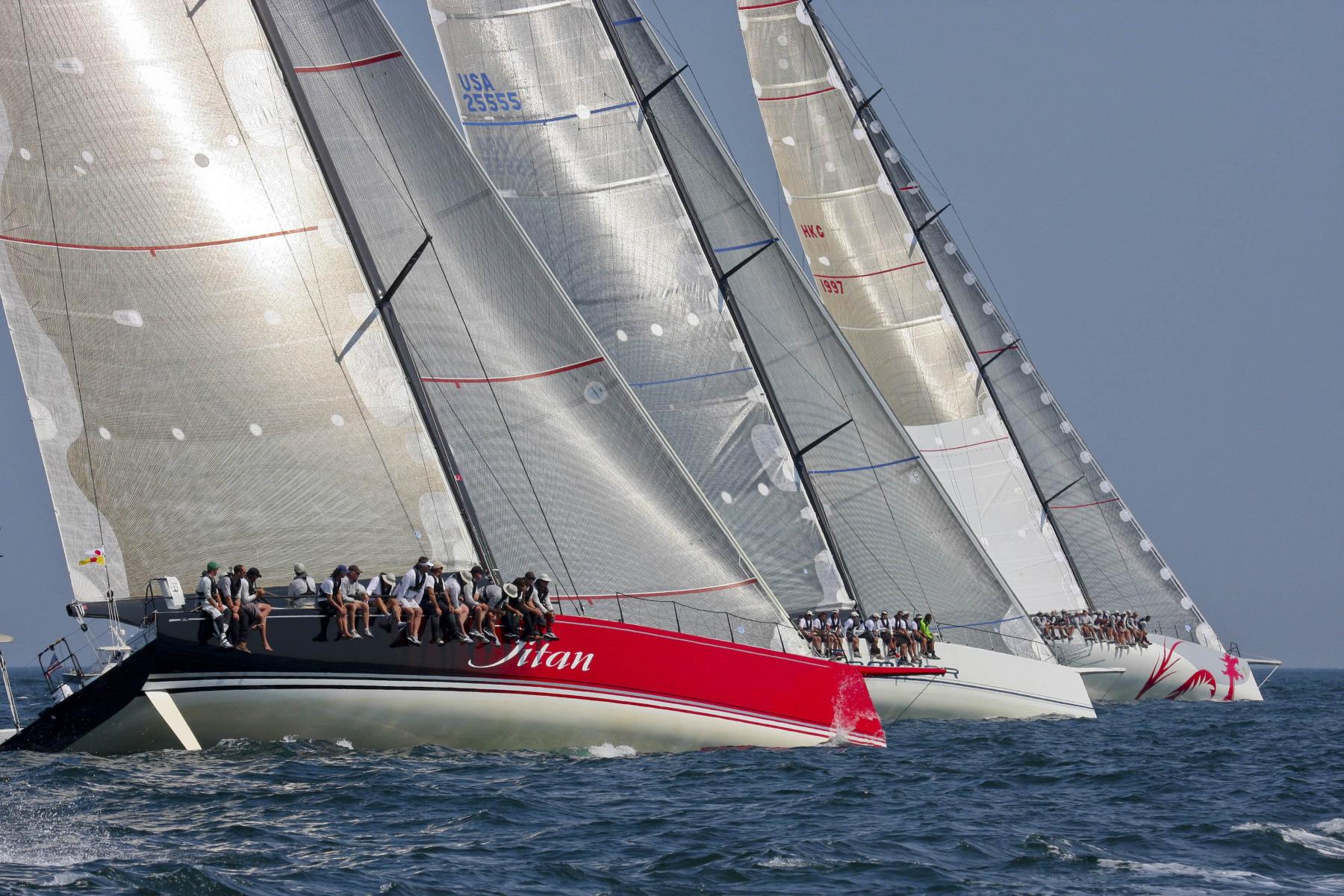 The Transpacific Yacht Race (Transpac for short) has been organized every two years with rare exceptions since 1906. The race starts at Cape Fermin near Los Angeles and ends at Diamond Head Lighthouse in Honolulu. Yachtsmen pass about 2225 nautical miles. For the length of the distance on the east coast of the United States the Transpac is behind of only the offshore Vic-Maui Yacht Race (2308 nautical miles) on the Victoria (Canada) – Lahaina (Hawaii) route. The third longest regatta is Bermuda Race, the length of which is 635 nautical miles, and the route runs from New Port (Rhode Island) to Bermuda. The longest offshore races also include Fastnet Race (600 nautical miles), Tour De France A La Voile (1000 nautical miles), Sydney Hobart Yacht Race (682 nautical miles), Melbourne to Hobart Westcoaster and several others.

Only three vessels participated in the first offshore Transpac race: the 48-foot schooner La Paloma of businessman and yachtsman from Honolulu Clarence Macfarlane, the 86-foot schooner Lurline of the member of the South Coast Yacht Club from Los Angeles Harry Sinclair, and 112-foot ketch Anemone of Charles Tutta. According to the results of the measurement the start time of each of them was recalculated: Anemone conceded Lurline 12 hours, and La Paloma - 27 hours. Lurline crossed the finish line in 12 days, 9 hours and 59 minutes after the start. This result has been the best for many decades.

From the very first outing this ocean race has attracted attention due to the participation of vessels built using the best achievements in shipbuilding. So, in 1977 the yacht Merlin passed the distance in 8 days, 11 hours, 1 minute and 45 seconds. This record lasted until 1997, as many as twenty years before Turbo'd Santa Cruz 70 Pyewacket under the leadership of Roy P. Disney reached Honolulu in 7 days, 15 hours, 24 minutes and 40 seconds. In 2017, a trimaran of the ORMA 60 class crossed the finish line in 4 days, 6 hours, 32 minutes and 30 seconds, breaking the 20 year old record of Bruno Peyron on the catamaran Commodore Explorer. The best result among the yachts was shown by the racing car Comanche, which not only improved the record of yacht Merlin, but also showed the highest daily speed: 481 nautical miles with an average speed of 20.2 knots. In July this year the new season of Transpac will start. There will be 92 participants mainly from the USA, but also one or two representatives from Canada, Switzerland, Australia, Japan, Italy, Great Britain, Mexico and the Cayman Islands. Will they be able to beat records of past years? 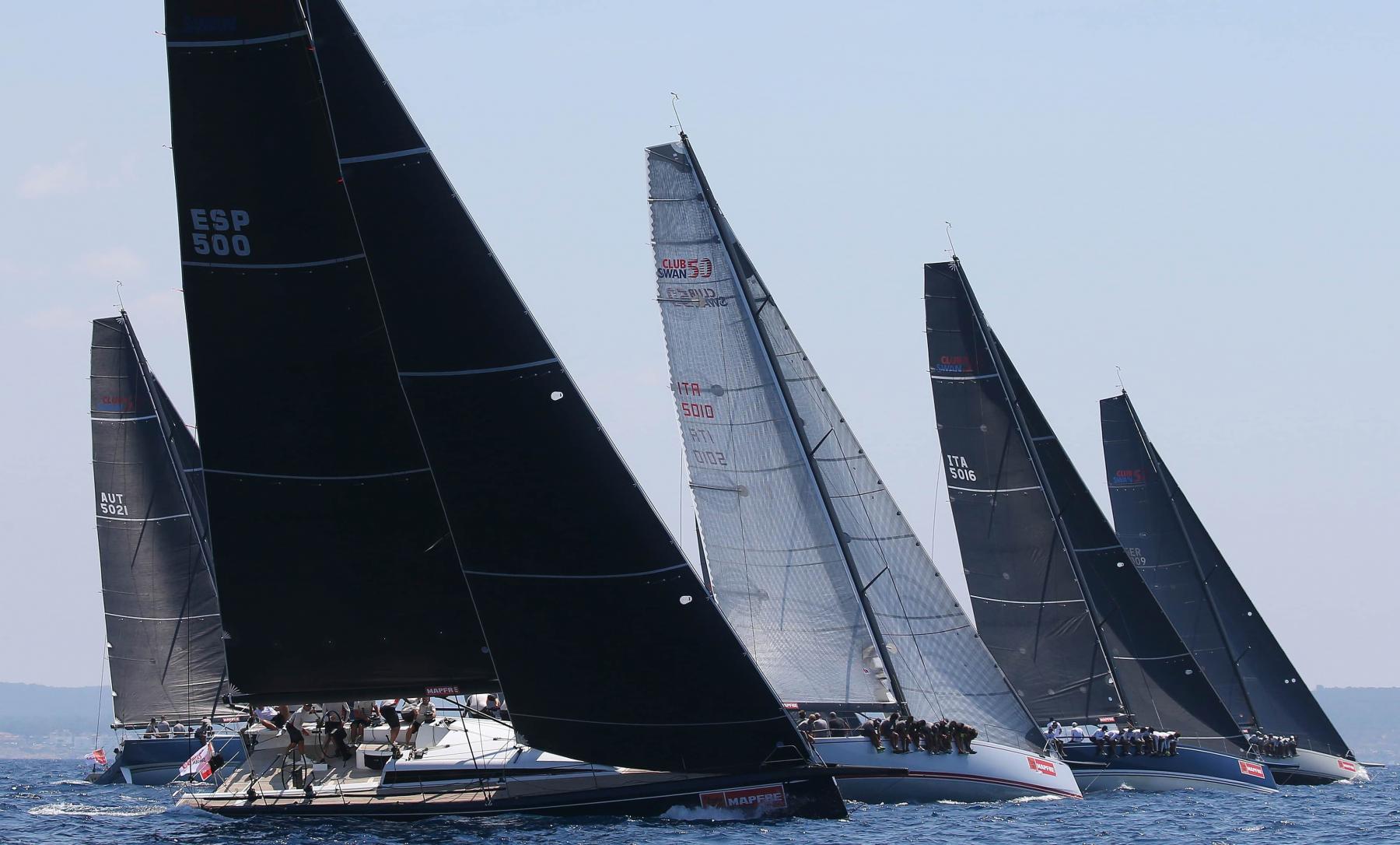 Copa del Rey is one of the largest regattas on the Mediterranean. Competitions have been held annually since 1982, and over a 36-year history it has gained the status as one of the most prestigious in Europe. In 2012 the award ceremony was led by Prince Felipe, and only two years later he participated in competitions as king of Spain. Other members of the royal nobility also have participated in the regatta.

From the very beginning, the organizers of the regatta, the yacht club Real Club Náutico de Palma (RCNP) and the National Cruisers Association Asociación Nacional de Cruceros, began with a good start: more than 50 yachts took part in the Cup, and the OIR handicap system was used for calculating the results (mathematical system of equalizing the time of the course by vessels of different size and materiel used in yachting – ed.). In the future, the measurement was carried out by different systems (IOR, IMS), until in 2009-2011 they switched to the widely used today IRC and ORC, combining also races in monofleets. The first two seasons the regatta was united with the International Mediterranean Championship (Campeonato Internacional del Mediterráneo). And the main goal of the following years was a significant increase in the fleet, at least 100 yachts, with most of them being foreigners. By 1990 it was achieved by attracting maxi-yachts and including events into the global and continental regatta calendar.

Over the years the divisions also changed. X-Yachts, SWAN, Melges 40, as well as the “flying” catamarans GC32, were the last to join. In 2019 more than 130 participants in 11 divisions will start: five of them are handicap (ORC 0, ORC 1, ORC 2, ORC 3, Mallorca Sotheby's IRC), the remaining six are monofleets (GC32, J80, ClubSwan 42 and 50, Swan 45), whose results will be assessed on arrival at the finish. The race marathon is an independent event, but, as originally, it is included in the calendars of the GC32 Racing Tour 2019, the Nations Trophy Mediterranean League for Classes Club Swan 50, Swan 45 and Club Swan 42.

The King’s Cup is played for six days, five of which include short-course racing in the Olympic loop and one day includes a coastal race of 30 miles. The coastal program is full of evening events: the official opening and closing ceremonies of the regatta with the direct participation of the King and confidants, daily awards for the winners of the day, and grand parties. Today the best yachtsmen of the world are seeking to win a trophy in the form of a burning flame. Multiple winners of the competition were "Caixa Galicia", "Aifos", "Rats on Fire", "Bribon", "Nationale Nederlanden" and several others. 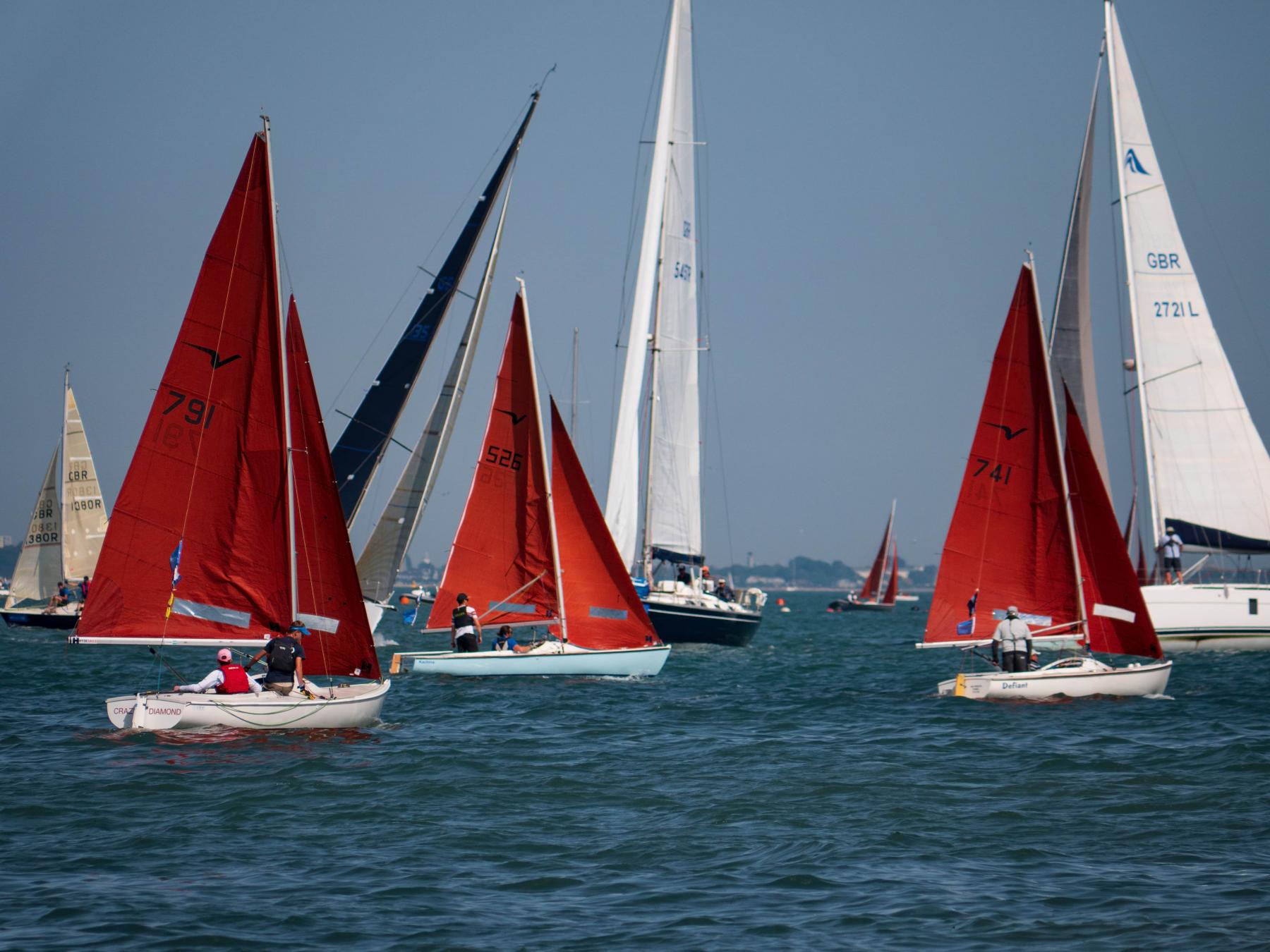 Cowes Week (acronym, KOWZ), one of the oldest regattas in the yachting world calendar, first took place in 1826 and outrun such top events as the America's Cup (America's Cup) - by 25 years, Kiel week (Kiel Week) - by 56 years. The Solent Strait near the Isle of Wight was chosen as the venue of the Week and the racing village was located in the town of Cowes. The prize of the first race day was the “Gold Cup with a face value of 100 pounds sterling,” and the race was held under the flag of the Royal Yacht Club.

Cowes Week is held annually in early August and the exact date varies from year to year: the regatta is held after another significant event in the UK - the horse racing festival Glorious Goodwood. Thus, the first day of the competition falls on the first Saturday after the last Tuesday of July. This year it is a week from 10 to 17 August.

The scale of the regatta is amazing: more than 1000 yachts take part in competitions, bringing together on the water at least 8500 yachtsmen. Entry list varies from professional sportsmen performing in Olympic and professional sports classes to those who go to sea on cruise yachts at the weekend. During the week about 40 starts are held daily. In the days of the regatta, you can observe an impressive variety of vessels from small to large, flags of home countries from around the world and colorful spinnakers. More than 100,000 spectators gather in the racing village to capture this unique event and to experience/ to feel sailing, which is traditionally strong in the UK.

Organizing of a such logistically complex event is possible due to the efficient  management of the racing process and the coastal program. Cowes Combined Clubs which was established only in 1964 is currently working on the regatta (previously each yacht club was responsible for its racing day - ed.) And brings together representatives of eight yacht clubs and the Cowes Town Regatta Committee. They establish their trophies and play them for a week.

In order to move apart huge flows, all classes of yachts are combined into three groups: the White Group, the Black Group and the Triple Crown. The first of them includes sports yachts, designed exclusively for day sailing such as: Daring, Dragon, Etchell, J70, J80, Multihulls, RS Elite, Sportsboat, SB20 and others - in 2019 18 classes are expected in total. In the second group there are yachts with different handicap, adapted for longer distances, what means they have the ability to stay the crew. Between themselves, they are also divided into four subgroups: up to 9 meters, 9-11 meters, 11-13 meters and over 13 meters. Triple Crown is suitable for all categories of participants. One race per day is scheduled for every class, with the exception of J70 and SB20, for which there are days with two starts. The prize fund of the regatta includes daily awards for the first, second and third place in each group. Representatives of the yacht clubs of the joint organizing committee present prizes to the best participants of the day. In addition, according to the results of all racing days, overall trophies and individual prizes are awarded for achievements in additional races organized by partners. On the eve of Cowes Week, the gentleman’s Commodore’s Cup is also held as a mark of respect to all yachtsmen who arrived at Cowes Week.

Today Cowes Week is an event of world significance that every yachtsman is seeking to get to. Every year the regatta brings the best sportsmen on the float. Sailing festival traditionally ends with a grand firework.

Dates: August 3-8
Venue: From the Isle of Wight to the Fastnet Rock, and from there back to Plymouth, UK-Ireland
Race format: offshore
How long ago: since 1925
Official website
Regatta Tracking Player 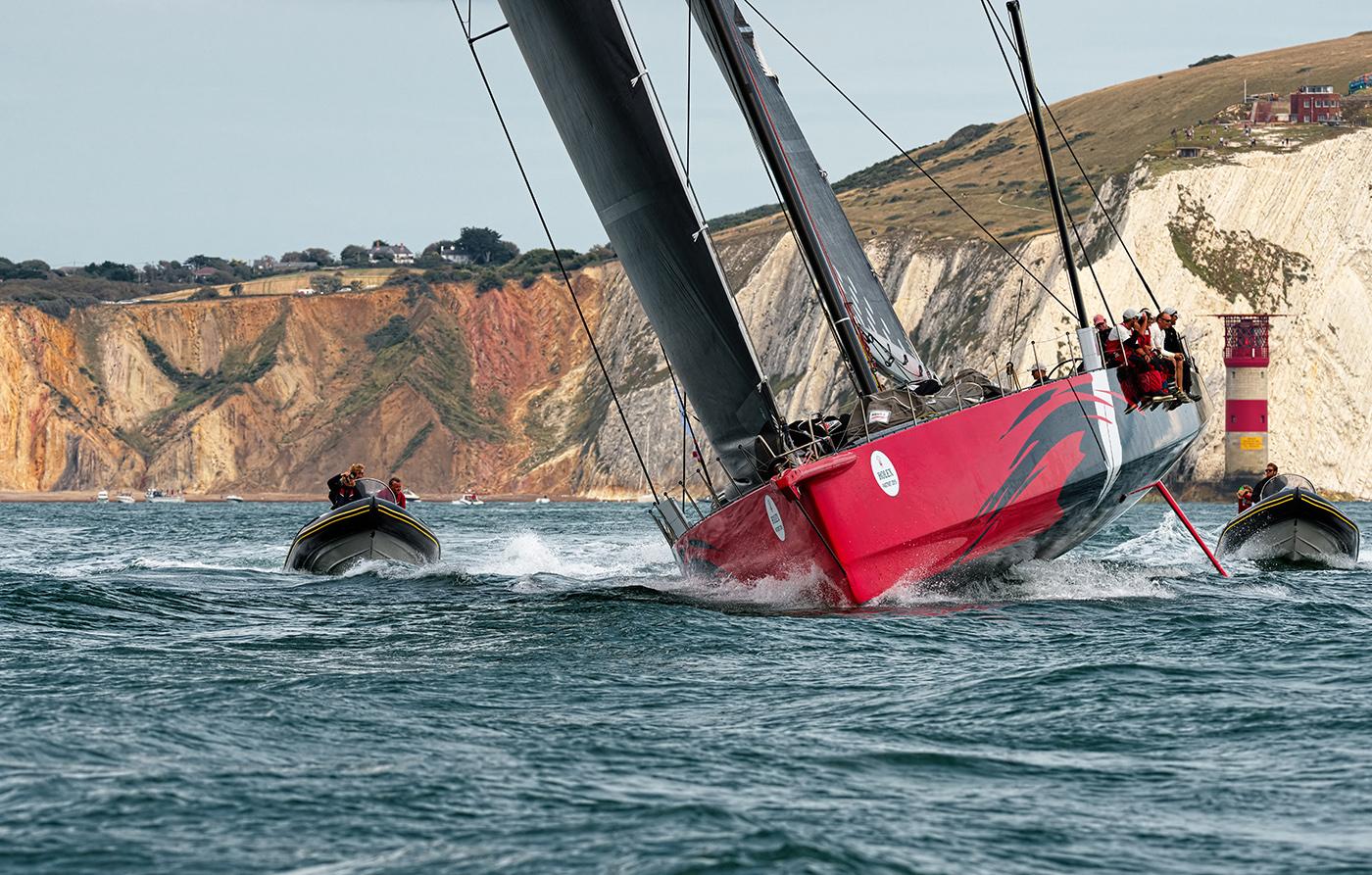 The classic Fastnet sailing race is justly considered to be one of the most difficult offshore regattas in the world. But this does not prevent her from being also popular among yachtsmen. Last season, in 2017, 362 yachts from 20 countries of the world were registered, and this year they are already 478. At the same time, 340 places in the IRC-division were picked up in 4.5 minutes after the opening of the reservation. The remaining applications have been filed in Class 40, IMOCA 60, Volvo Ocean 65 and classes of multihulls. The regatta is held by one of the UK's oldest yacht clubs, the Royal Ocean Racing Club (RORC).

In the first season only 7 yachts took part in the race and only 4 successfully completed the distance. The winning yacht finished the race in 158 hours and 45 minutes. Today participants are fighting for the opportunity to go 608 miles faster than the current record holder, catamaran Volvo 70 “Abu Dhabi”, which result was 42 hours and 39 minutes, and the best indicator among trimarans was 32 hours and 48 minutes.

The route of the regatta includes eight marks that need to pass without a stop. Start takes place in the Solent Strait (Cowes, England), from where the crews go to the Fastnet cliff in the Irish Sea and then back to Plymouth (England).

1979 was a tragic year for race participants. As a result of the strongest storm, 18 people died and only a third of 303 yachts finished the regatta on their own. Such outcome brought major changes to the Regulation on the regatta: obligatory qualifying races the day before, a course of first aid and safety on the float, VHF radio stations on board and storm sails.

Absolutely different in size and construction vessels take part in the regatta. One of the more innovative participants in 2019 is the “flying” 105-foot trimaran “Sodebo Ultim’ 3 ”, 98-foot Macif, 130-foot Banque Populaire V, which represent France.

This year it was decided to start the race a week earlier in order to avoid an overlap in the schedule with another major regatta - Cowes Week. At the end of August it would also be impossible to give a start because of too severe weather forecast.

Sailing regattas for experienced yachtsmen and yachtswomen. The Sailor's Guide

Use Deviation for sailing and other sports