There is a Cold Hawaii spot in Denmark. Yes, it's about what you're thinking

On the map of the world's best outdoor spots, one will find a place called Cold Hawaii. It's in Denmark.

Yes, it is exactly what you just thought it was about: there's surfing there, too. Moreover, it's incredibly popular among locals. The sport is suitable not only for surfing but for many other water and wind sports and activities.

In this article, we'll tell you what Cold Hawaii is, how to be active on the spot, and where to get the weather forecast for it.

Did I get that right: Cold Hawaii, Denmark? What spot is that?

Cold Hawaii is the most popular surf spot in Denmark, which — you’re right — is not at all associated with this summer water sport, which is usually practiced on warm seas in places like California, the original Hawaii, Argentina, South Africa, Australia, and so on... But let’s say it again: there’s surfing in Denmark, too! It refers to what is called cold surfing or winter surfing, which is practiced on cold seas. Hence, the name of the spot.

Cold Hawaii surf spot is located in northwestern Denmark, a region known locally as Nordvestkysten (which translates as Northwest Coast). It is part of the Jutland Peninsula, one of the many peninsulas and island on which Denmark is located. It separated the North Sea and the Baltic Sea. Administratively there are three of the six regions of Denmark located on it: Nordjylland in the north, Midtjylland in the middle, and Syddanmark in the south of the peninsula.

Next is the most interesting thing... Cold Hawaii is not just one spot, but a collective name for a whole series of 31 officially registered spots stretching along the entire beachfront of northwestern Jutland from Agger Tange in the south to Hanstholm in the north. The length of this beach is exactly 50 km. The main and most famous surf spot is Klitmøller which is located approximately in the middle in between. Another popular intermediate surf spots are Vorupør and Bunkers.

Most of all of these spots are former fishing villages, which have developed into Denmark’s largest surfing community. It is also one of the popular spots for outdoor activities in general, due to the fact that it is Thy National Park, one of five national parks in Denmark, which almost exactly coincides with the borders of Cold Hawaii. So except from surfing, you can hike through the dunes of the national park and visit various attractions around such as Faddersbøl Mølle, an old windmill, or Ask fra Ashøj, a huge wooden statue of the Danish forest troll.

To get to Klitmøller from the capital and the country’s largest city, Copenhagen, takes about 5 hours by car (431 km). The nearest major city Aalborg is north of the coast. Copenhagen, in turn, could be reached from any European capital or major city, including nearby Malmö and Stockholm in Sweden, Hamburg, and Berlin in Germany, and Amsterdam and Rotterdam in the Netherlands. 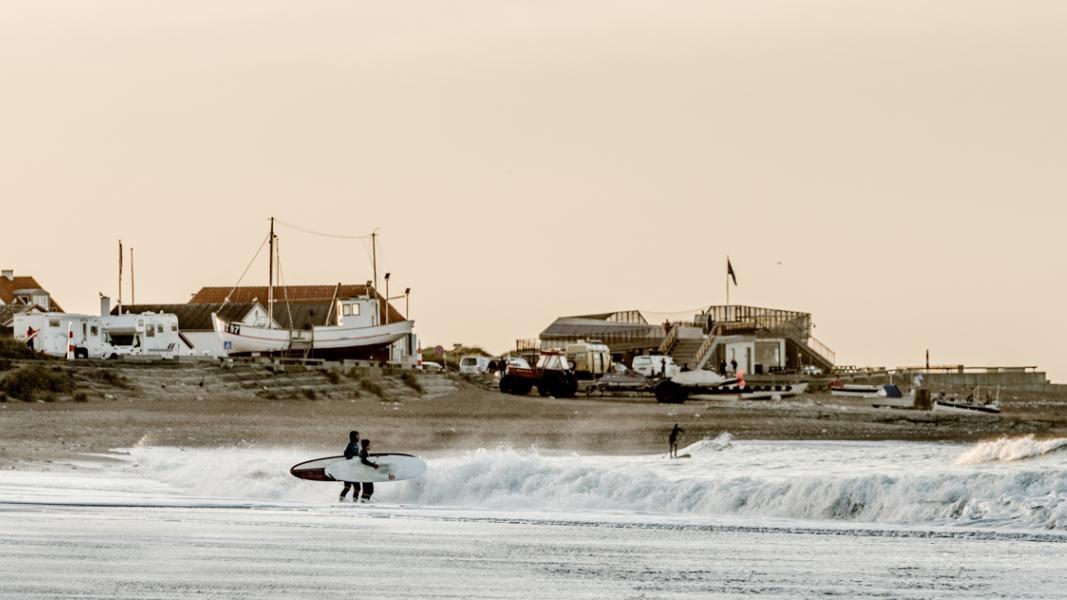 How to be active on Cold Hawaii multi-outdoor spot in Denmark?

Cold Hawaii is first and foremost a surf spot and surf community. Over the past 10 years, it has grown so much that it has held the international surfing championship Cold Hawaii PWA World Cup with 32 of the best surfers in the world competing for the cup under the watch of the Crown Prince Frederik of Denmark. The site also hosts the annual Cold Hawaii Games, including the IFCA Wave European Championships in windsurfing.

A testament to the popularity of Cold Hawaii is that the Danes themselves made a TV series about it in 2020 (IMDb rating: 6.4/10) and that it has been written about regularly even by such popular non-sports publications as GQ, which noting that “short boarders, kayakers, windsurfers-everyone fits together in the line-up”. The authors of the article are right — there is not only Cold Hawaii surfing but the spot is also suitable for all these sports, as well as kitesurfing and SUP.

Good waves on the spot are created by the two reefs on its southern end. Here, as on any seashore, also constantly blows strong winds with gusts. As a result, fans of more than one sport find good natural and weather conditions in Klitmøller. For example, you can do kitesurfing on the spot from March to November (which is the best season) with water conditions of chop and wave of 1–3 m and working wind direction: S, SSW, SW, WSW. You need to have an intermediate level of riding.

Going to Denmark, but do not do sports? Not a problem. You can learn at least one of these on the spot thanks to two great schools and camps: Cold Hawaii Surf Camp or WestWind Surf Shop Klitmøller. They also provide board rentals, lodging, and more. After learning to surf on Cold Hawaii you can take a broader look along the shore and head to many more surf and water spots in the surrounding area: Laeso, Lokken, Sletteststrand, Oslos, Thorsminde, Lemvig, Thyboren, and others.

Other outdoor activities in Cold Hawaii and Thy National Park includes doing golf at the Nordvestjysk Golfklub; fishing off the pier on the Vorupør spot which is packed in the summer with anglers trying to catch mackerels, sea bass, and flatfish; leaning about local nature at The North Sea Aquarium with 70–80 species in this same village; taking a boat trip to Limfjord, the large inland bay east of the coast.

Where to get the weather forecast for Klitmøller, Denmark?

To get the weather forecast for Klitmøller and all other Cold Hawaii spots, open the Weather Map in the Windy.app and find Denmark on it — there’s that little island state in northern Europe and there’s Nordvestkysten and Thy National Park, which we talked about above. 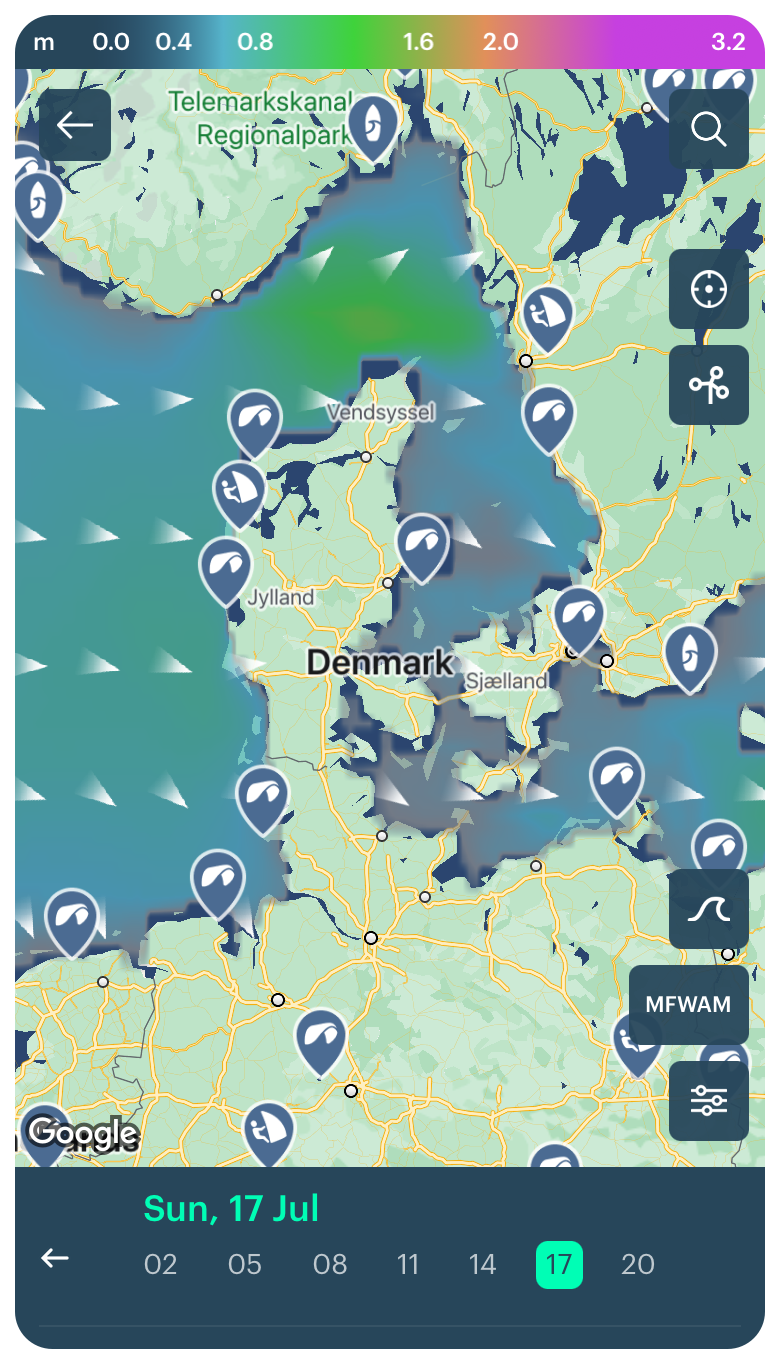 Denmark Swell Map and weather forecast in the Windy.app for iOS 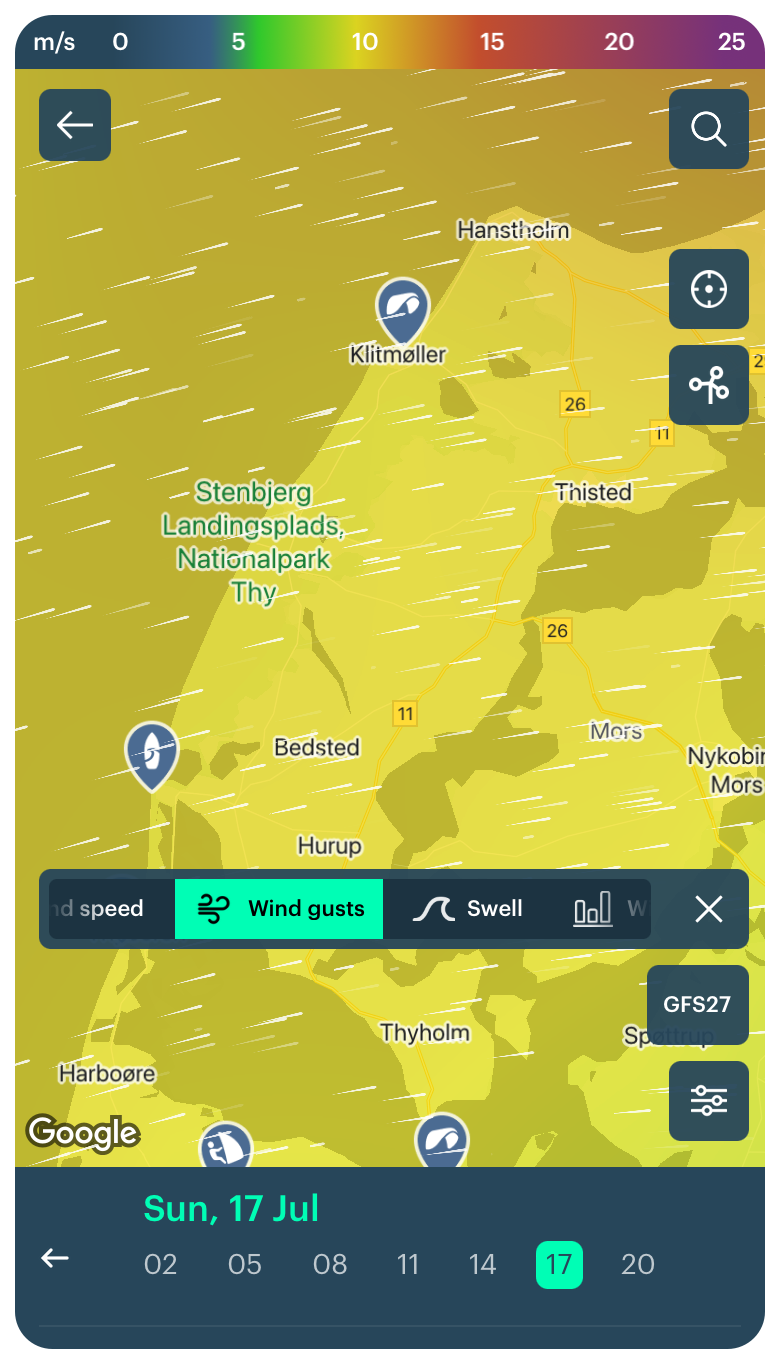 Wind Gusts Map for Cold Hawaii and Thy National Park in the Windy.app for iOS

On the map, you can select several layers at once: Swell Map, Wind Map or Wind Gusts Map, and Precipitation Map.

Zoom in on the map to find individual spots to get a brief forecast for them. 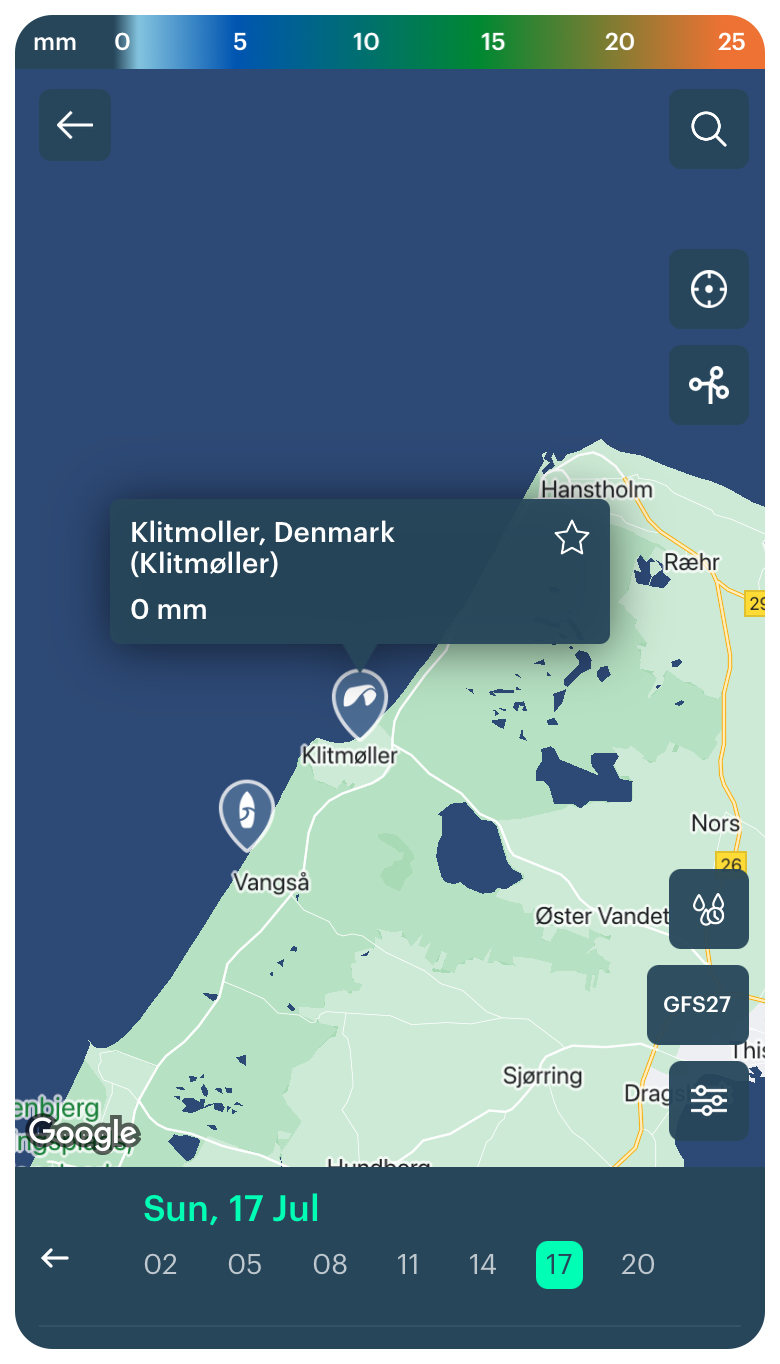 Klitmøller surf spot in the Windy.app for iOS

Go to the spot screen, to get a detailed swell forecast (to do that, select the Surf Weather Profile by the icon to the right of the weather models). You’ll also find other weather elements on the forecast table. 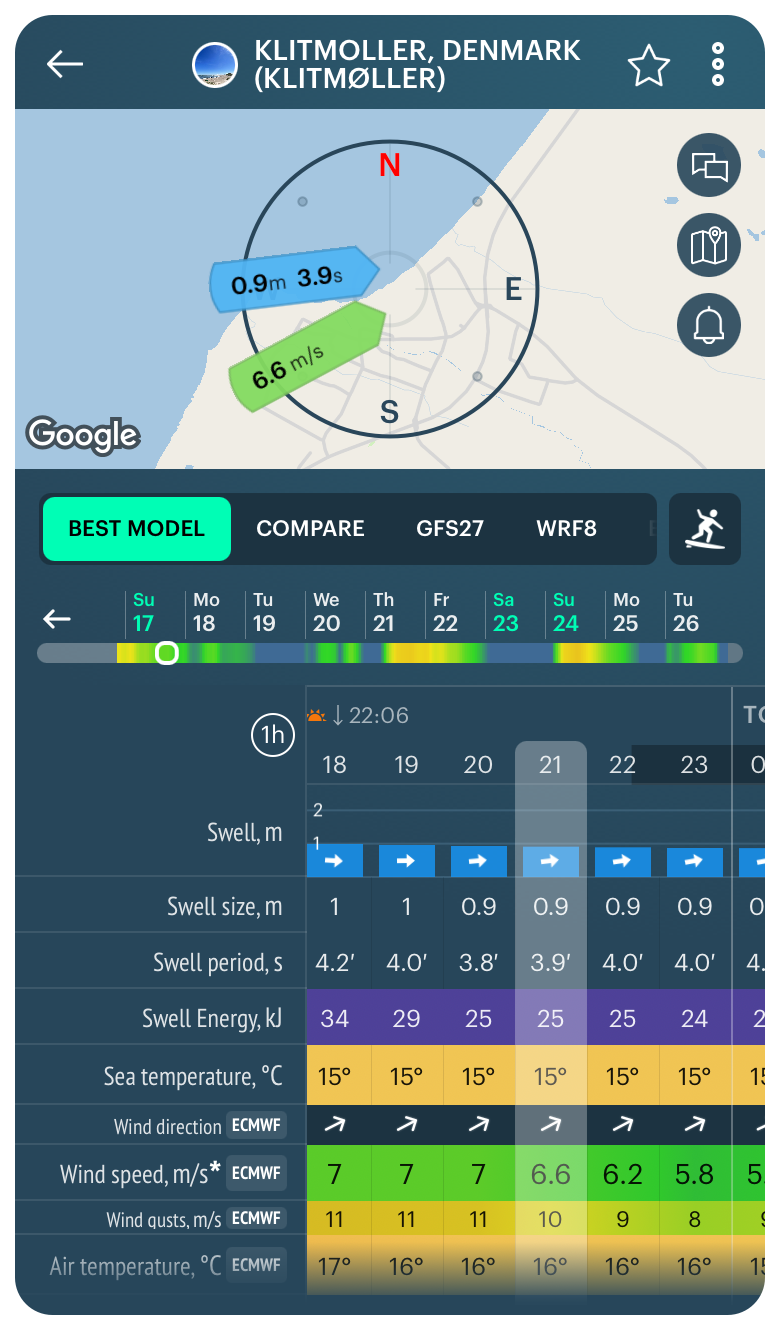 Klitmøller surf spot swell and weather forecast in the Windy.app for iOS

Here are a few more helpful actions to improve the weather forecast you receive and get the most out of the Windy.app for Cold Hawaii, Denmark:

1. Compare wind and precipitation forecasts from more than 10 weather models available in the app to see whose forecast is more accurate. 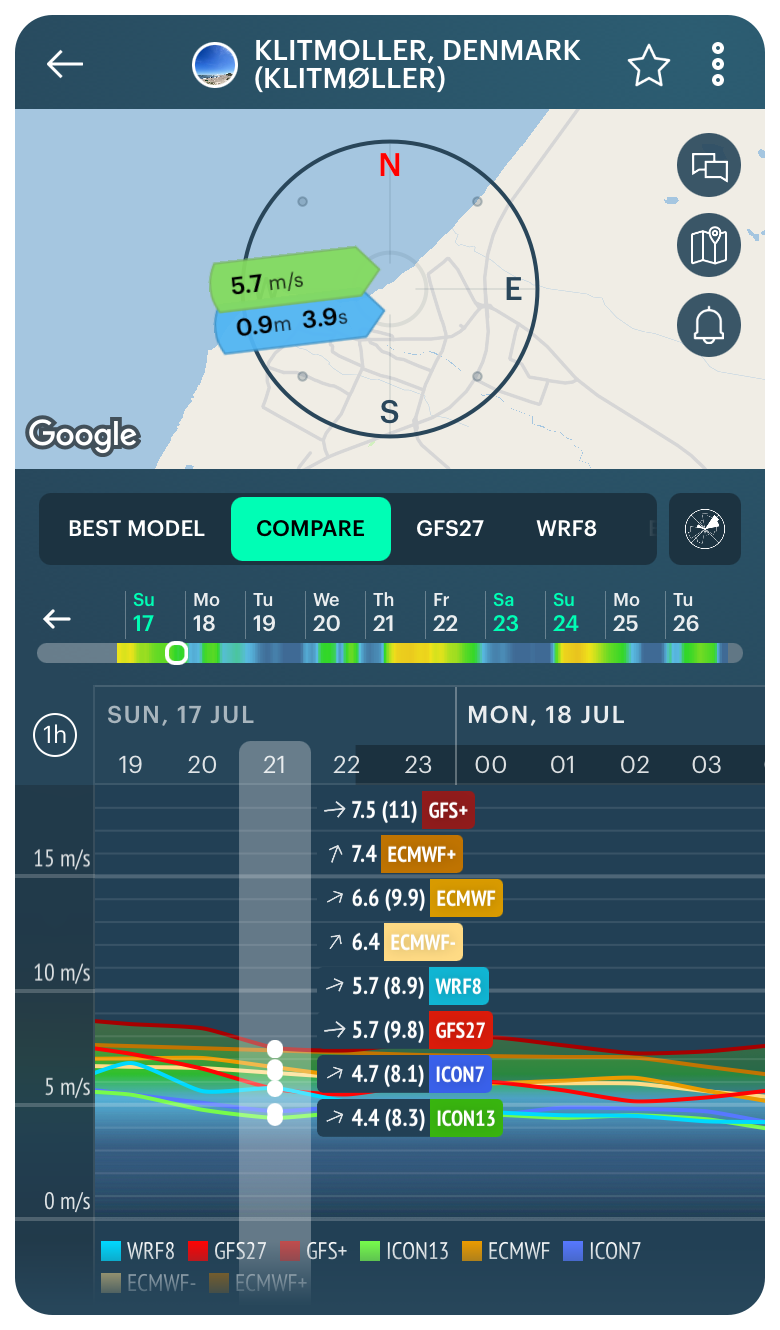 Compare Mode of weather forecast for Klitmøller, Denmark, surf spot in the Windy.app for iOS

2. Go to Spot Info by scrolling down the screen to get basic surfing information. If it’s not available, you can write it yourself and help others. 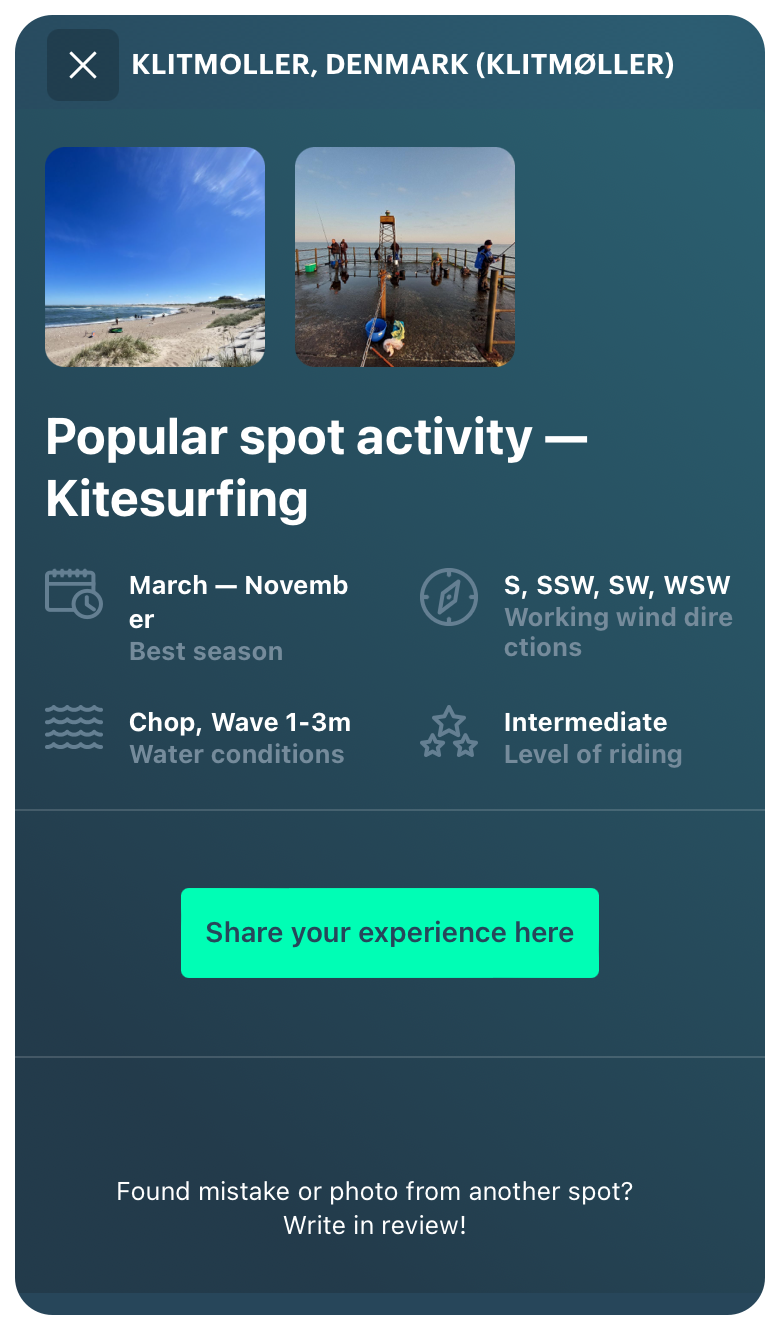 Klitmøller surf spot information in the Windy.app for iOS

3. Research what the weather was like on that day and on a monthly and annual average over the past 10 years in the Weather History (Archive) section on the spot. 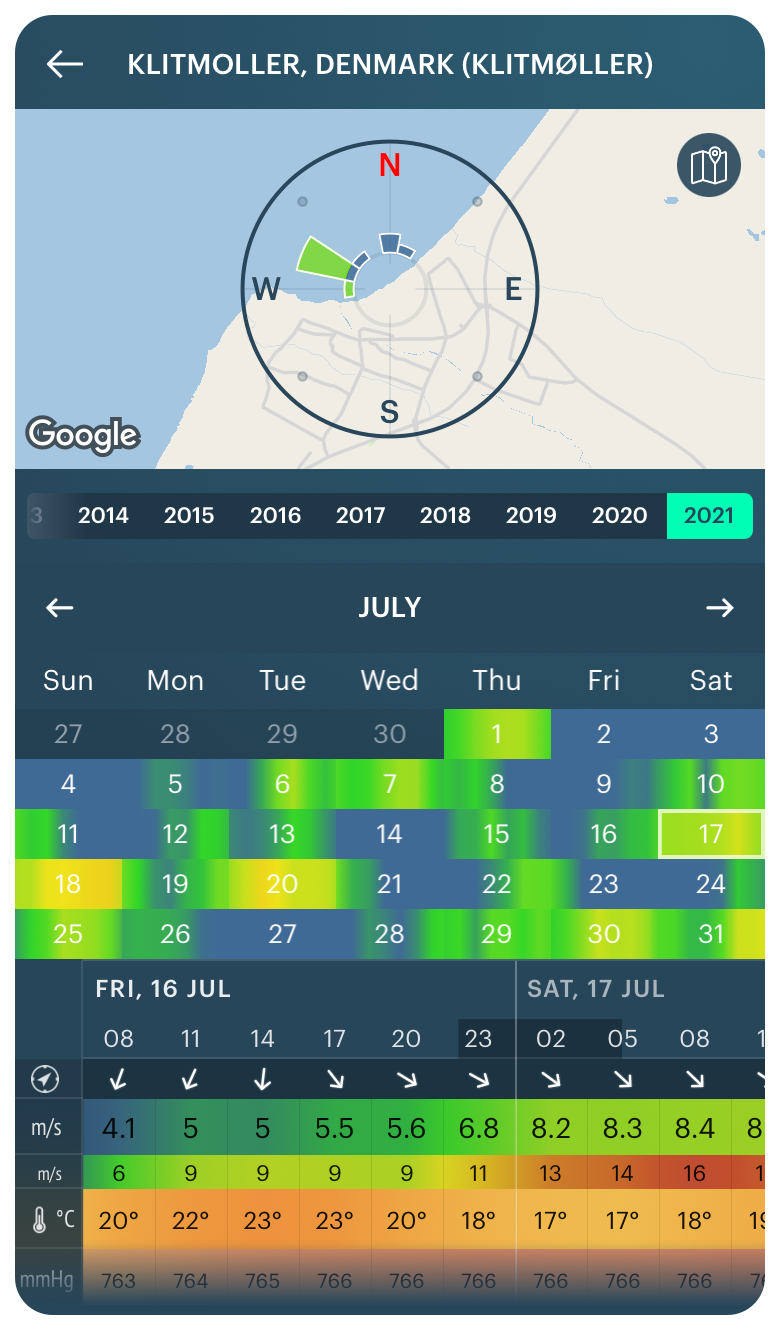 Weather history for Klitmøller surf spot in the Windy.app for iOS

4. Get a list of companies that provide different services to outdoor enthusiasts in the Services section also at the end of the spot screen. 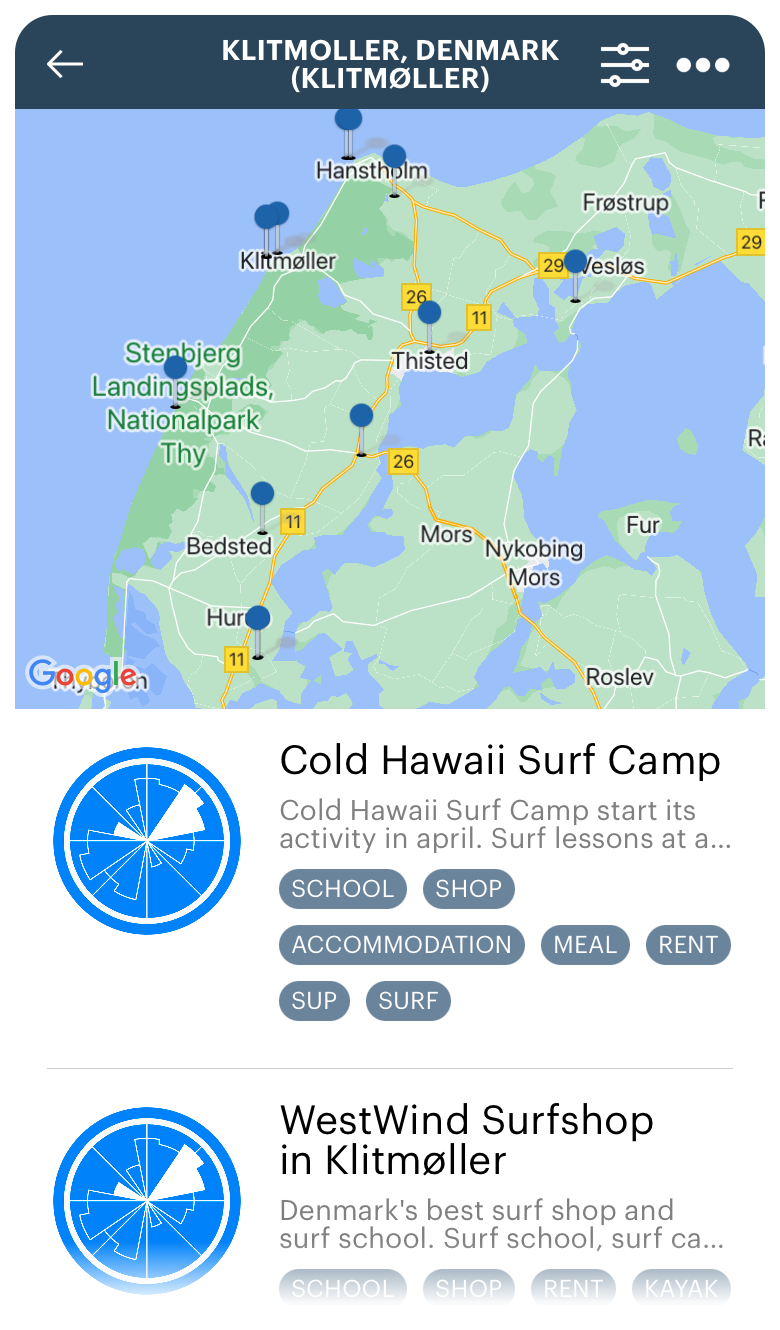 Servcies on the Klitmøller, Denmark, surf spot in the Windy.app for iOS

5. Ask for advice about the weather and anything else in the special chats by clicking on the message icon at the top of the screen. 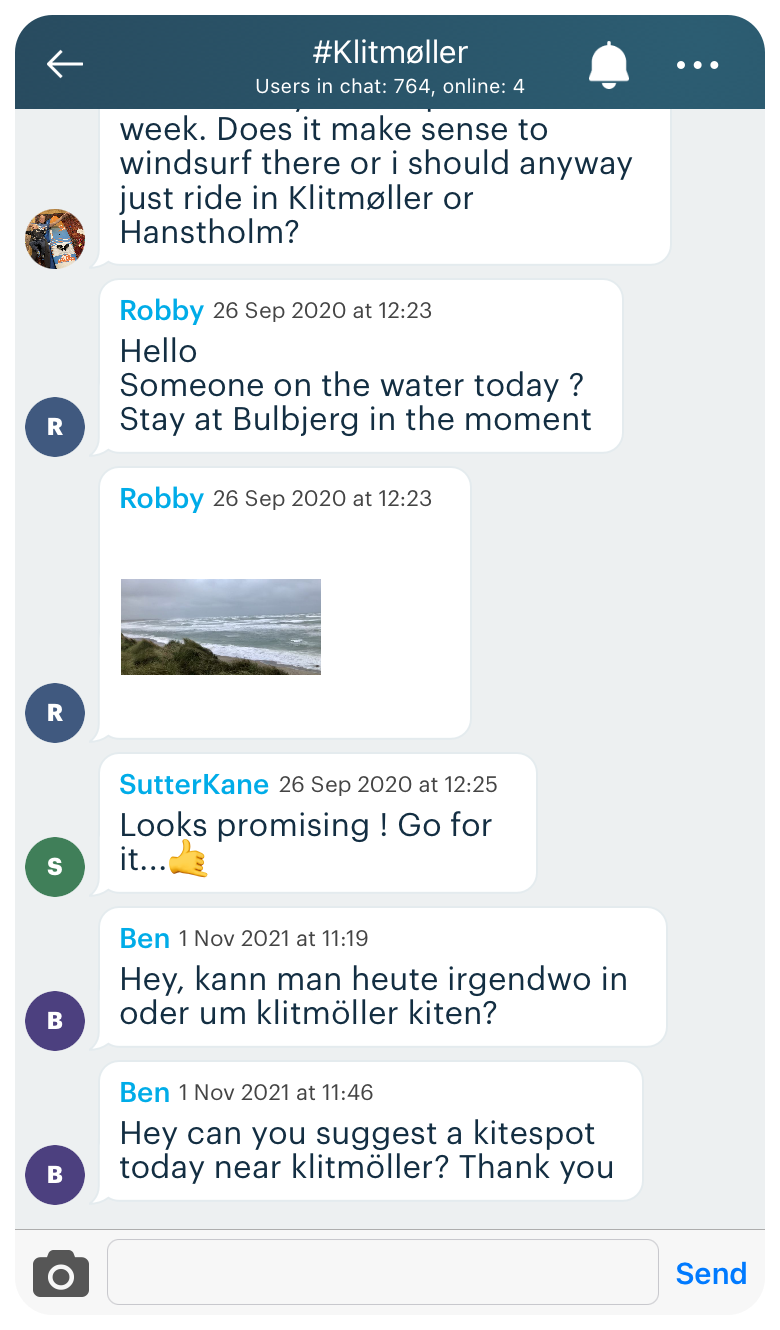 Klitmøller surf spot chat in the Windy.app for iOS

6. View photos from the spot uploaded by other Windy.app users in the Gallery section of the spot and the Community section, and share your own photos. 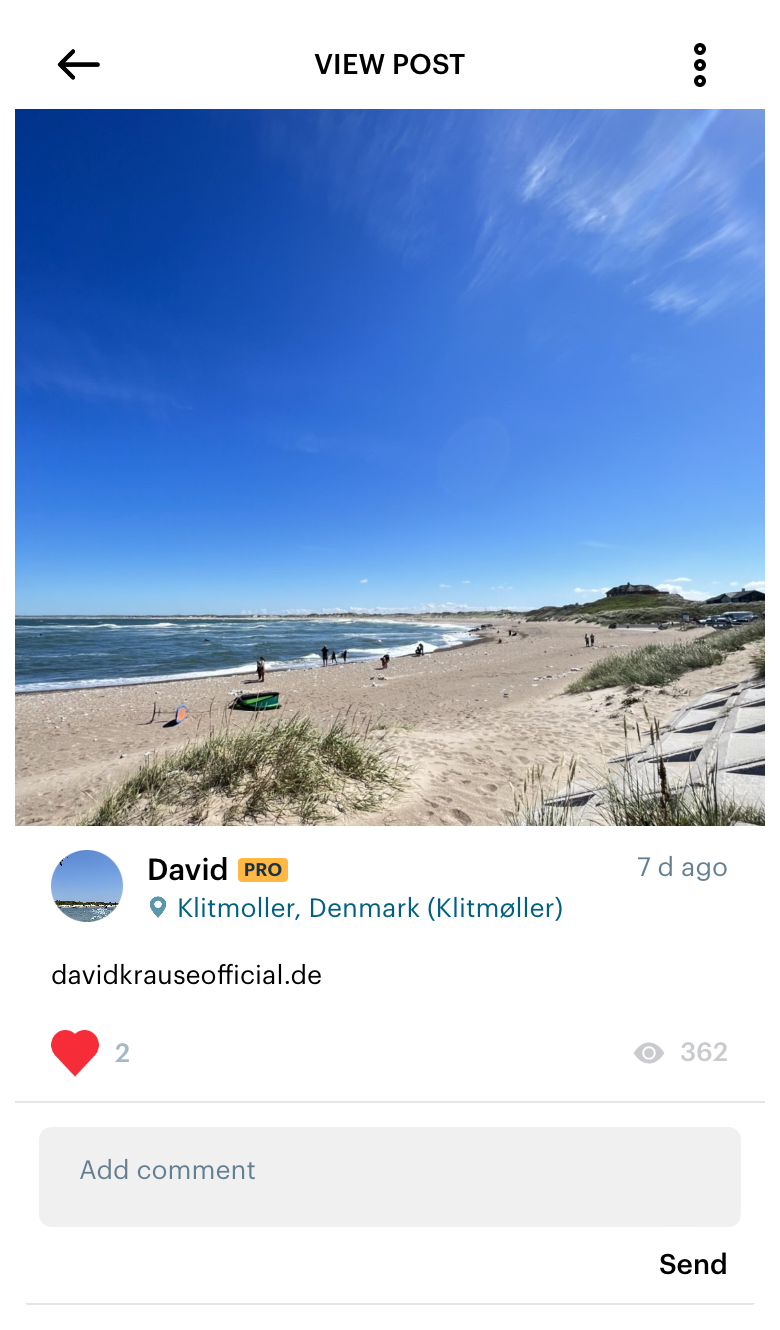 Photos of Klitmøller, Denmark, surf spot in the Community section in the Windy.app for iOS

7. Go back to the Weather Map to get real-time wind and air temperature data from one of the closest weather stations, activating Live Stations feature. 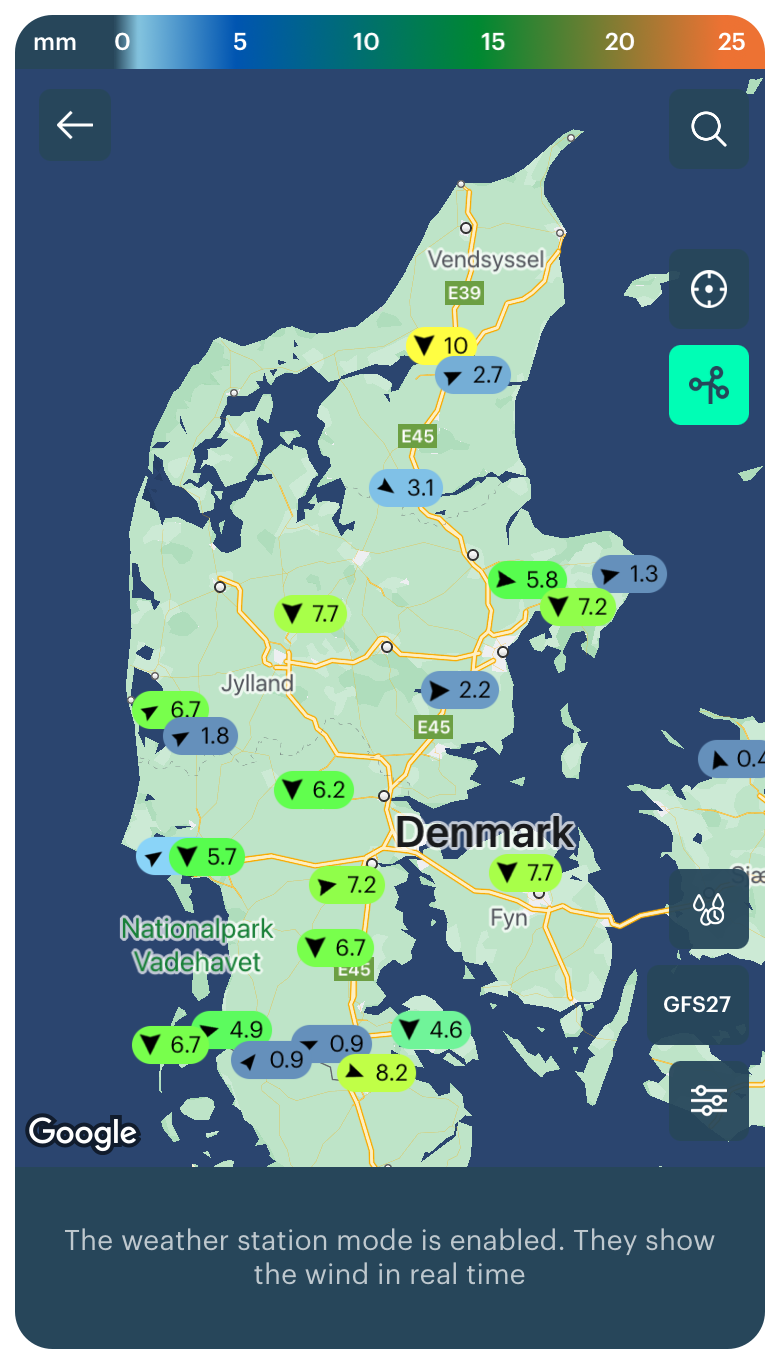 Live weather stations on the Weather Map for Jatland, Denmark, in the Windy.app for iOS

The collection of articles about surfing