Everyone gets seasick. If you set your mind to it, you can create such conditions for a physically healthy person when they will get seasick for sure. Therefore, in most cases it is not a disease but a normal response of a healthy body to yacht motions. Children under age two don’t get seasick at all. Kids aged 3-12 suffer from the swell the most among all age groups. In natural conditions women are more liable to be seasick than men, while in laboratory testing their results are not any different from those of men. 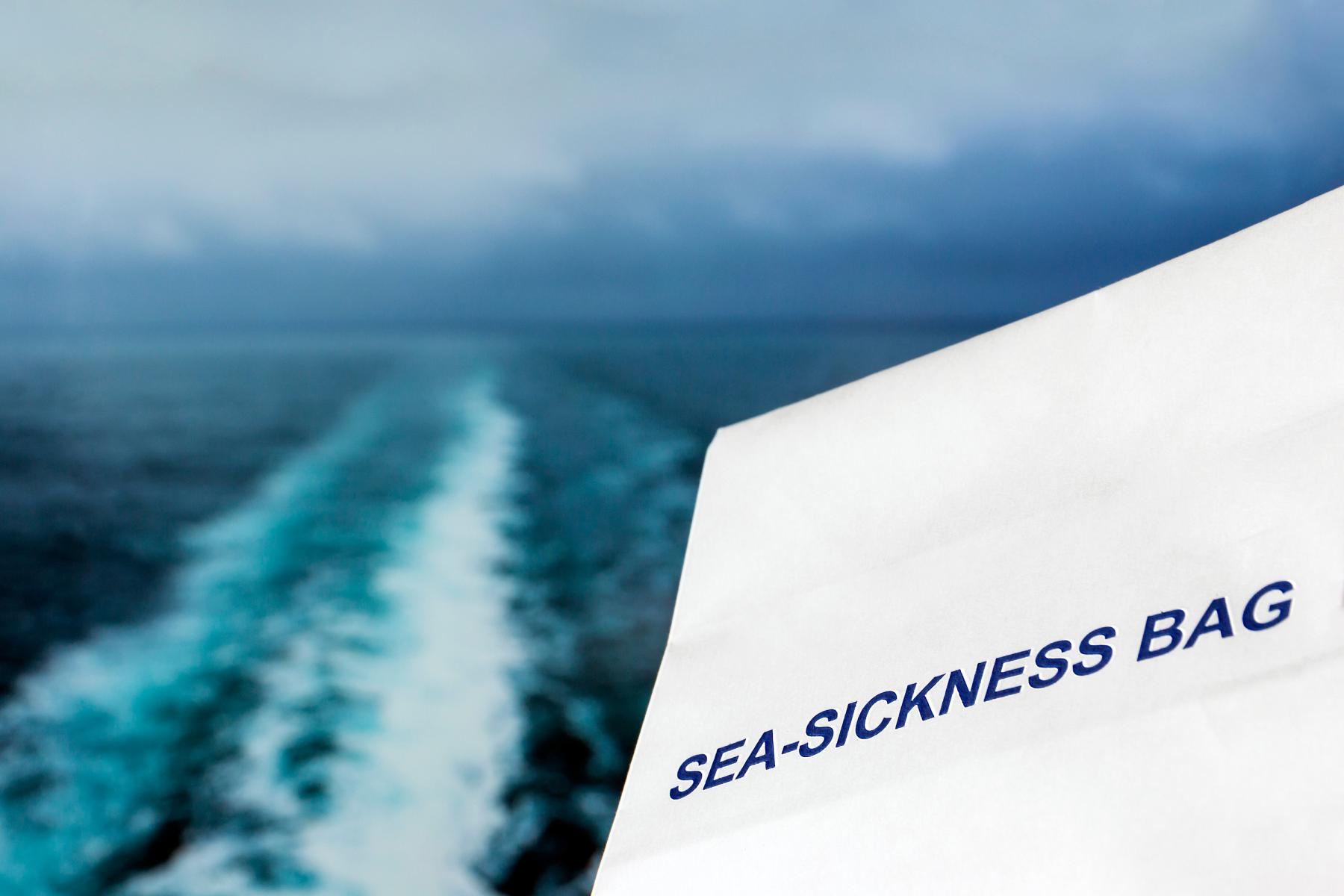 You get seasick when you see one thing but feel something different.

When we are downstairs in the cabin, we can see immobile walls and furniture, but our vestibular system continues to feel the motion. This discrepancy triggers the seasickness mechanism during sea voyages.

There are also opposite situations when the person’s body remains at rest while the eyes see something dynamic going on, for instance, a 3D film or a computer game in virtual reality goggles. Similar things happen during a strong alcohol or drug intoxication, when the picture does not match the sensations.

There is a hypothesis (M.Treisman. Motion sickness: a revolutionary hypothesis) stating that while sea voyages were rare for our ancestors, the accidentally eaten poison was a common thing, so our body learnt to respond to such conflicts of the systems in an understandable way – as if reacting to a poisoning with neurotoxic mushrooms in which we did not feel the taste of the poison on our palate (things happen), but felt the effect from it (hallucinations). Hence, vomiting and sickness which are protective mechanisms during poisoning, although there is no poisoning going on as such.

A couple of days of motion normally suffice to help the body adapt.

Getting used to motions happens all of a sudden, normally towards the end of day two. From that moment on one can feel at home on the boat and enjoy the cruise. Of course, all people are different – some need more time, others less, but very few people can’t adapt at all.

If you act appropriately, you can start feeling comfortable as early as in the first days.

You needn’t get seasick first to get used to it. Quite the opposite. This process is similar to walking on a tightrope – if there are no motions at all then there will be no getting used to it either. If there is too much of it and no preventive measures are taken, you can find yourself in an extremely severe condition: vomiting, headaches, total loss of energy. I noticed that, as strange as it is, adaptation in this grave condition happens more slowly than for those who found themselves in the same conditions but manage to persevere without bringing themselves to the extremes. So, as it turns out, there are two options of getting used to the swell – an easy and short one or a painful and long one. I wish everyone to stick with the first one and here are two tips to that end:

It is important to understand that it is relatively easy to avoid getting seasick, whereas it is much more difficult to extricate yourself out of that condition, especially its more severe form. 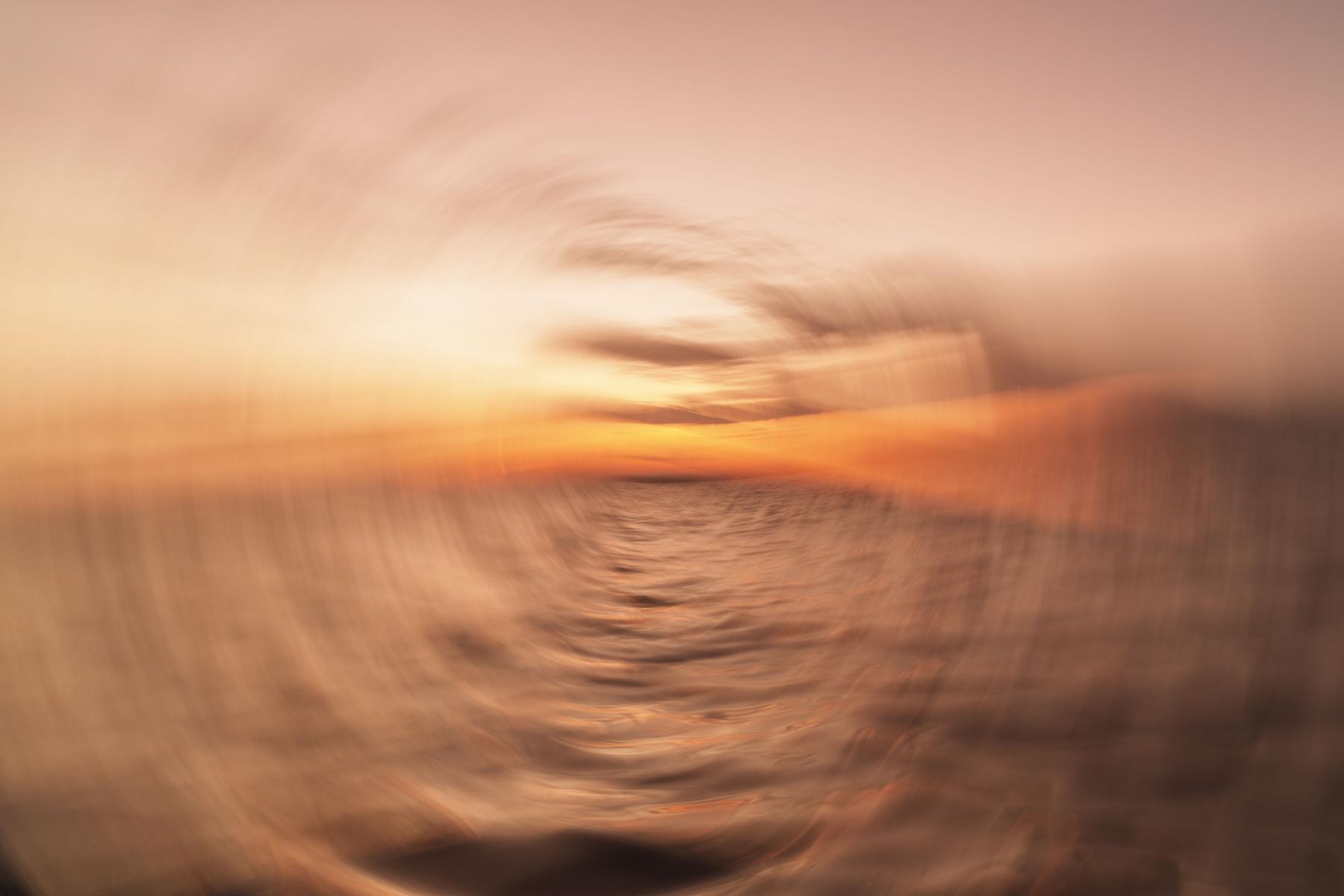 What makes your condition worse during seasick?

The original cause of seasickness, namely any situations when many objects connected with the moving yacht get into our sight:

What makes one feel better during seasick?

To eliminate or ease the swell, one should:

Eliminate the conflict of eyesight and vestibular system:

Antihistamine and anticholinergic medicines, such as the dimenhydrinate drug Dramamine and Scopolamine (hyoscine hydrochloride) respectively, have proven their efficiency, that is five times reduction of getting seasick (Alan J Benson, M.D. Medication fo Motion Sickness). They are very helpful indeed, but the effect should not be overestimated – your own behaviour on board matters more than taking this medicine. In particular, if we compare reading inside the cabin with being in the fresh air behind the helm, then Dramamine will not be helpful in the first case and might not even be needed in the second one. This doesn’t mean you shouldn’t take medicines. You should.

Such as on the first day when it is better to take all the possible preventive measures, provided they do not conflict with other. It’s just that taking pills will not rid you of the necessity to be careful. Also, you need to keep in mind that Dramamine makes you drowsy. Scopolamine has a similar effect, albeit not such a strong one. The bottomline is that you shouldn’t take too much medicine if you are on the watch, but if someone is feeling the first signs of seasickness, you can give them a “knock-out” dose (two pills) of Dramamine and send to sleep.

Those who got a forward cabin should move to an after cabin for a while or just lie down in any vacant place in the lounge or in the back of the deck (motion is strongest in the nose part and may even lead to the state of weightlessness). When in a cabin, you should open the windows and let some fresh air in. But you shouldn’t open the eyes, at least for longer than a second.

The placebo effect as seasick

As the reason for seasickness is a purely mental one, a placebo works just right against it. If a person honestly believes that a certain folk cure will help them, the miracle does normally happen and they start feeling better. But, strictly speaking, one should not rely on such remedies as:

How to register the worsening of condition during seasick?

While motion sickness may initially manifest itself in a variety of ways, unless measures are taken, it always leads to one and the same condition: nausea, vomiting, total lack of energy. It is crucial to recognize this state early on and take instant measures, as sometimes only few minutes of inappropriate behaviour separate the states of mild dizziness and “puking”. If you detected the condition and took the necessary measures in a timely manner – the relief will be fast and painless.

On the contrary, if you drive yourself into the state of an “amorphous jellyfish” – the relief will take long and be painful. Therefore, when on board, it is essential to pay close attention to your own body, as any unusual sensations may be the first symptoms of seasickness. This means recognize the very moment when urgent measures are needed, when you should stop doing “something that makes you feel worse” right away and start doing “something that makes you feel better” (see above). Here is a list of symptoms, each of which may point to seasickness (all the more so, if they are combined):

Generally speaking, any unusual or weird sensations, along with these ones, are a reason to immediately discontinue what you are doing and move on to something more appropriate. Otherwise, your condition will deteriorate further followed by a sudden and rapid arrival of stage two – vomiting and weakness. 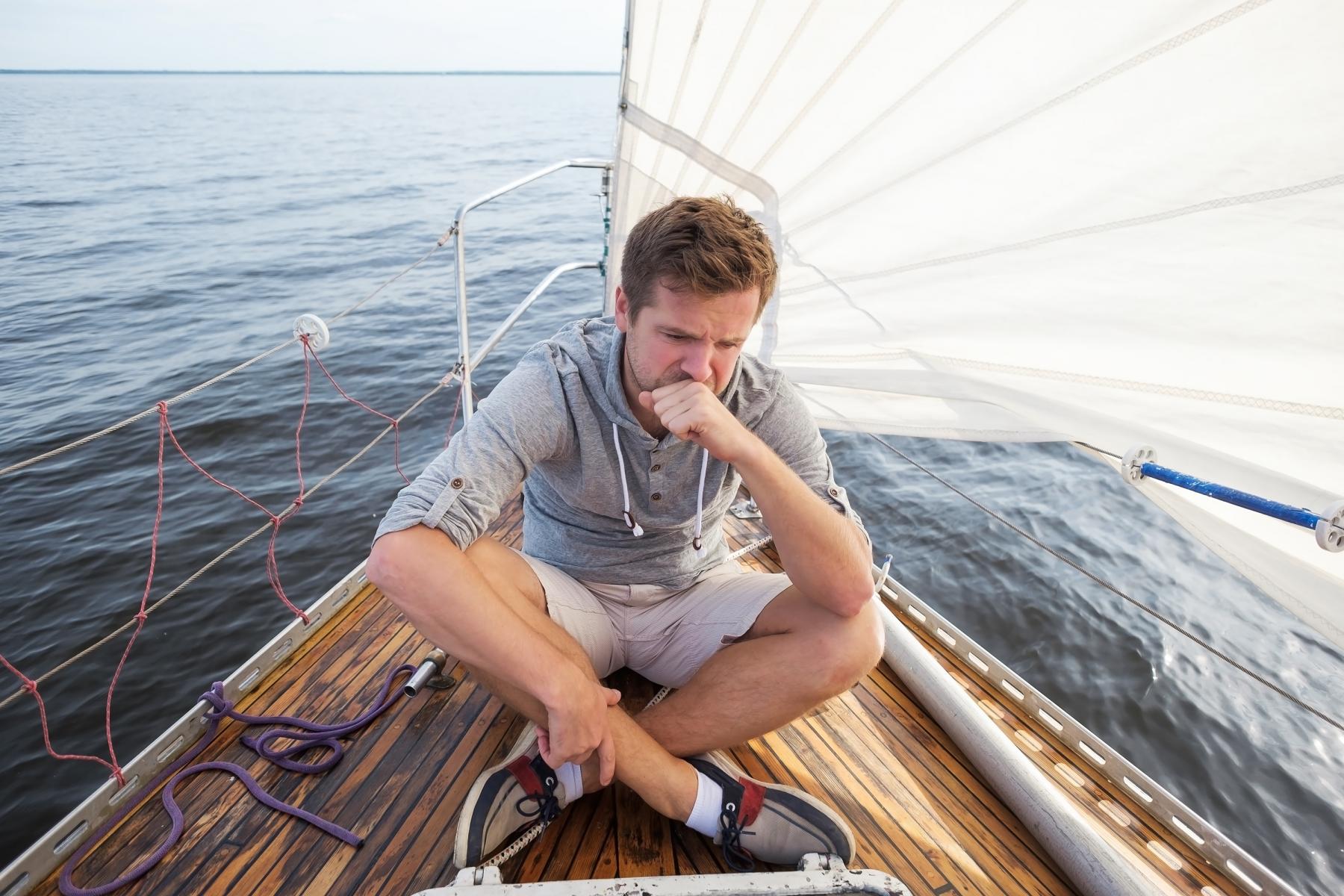 This is what I tell the first-timers about the rules of being at sea on day one:

Let me reiterate: these rules are only valid on day one. After that each person makes decisions for themselves based on their condition.

Here is one more rule for those who are just about to throw up: do not try to make it to the bathroom. If you have felt seasick on the deck, you will undoubtedly feel much worse in a close room. Can it get any worse? Oh yes, it can. It’s when you don’t have the energy to raise and make few steps back to the deck. There was a situation when one of us spent an entire day in the latrine, unable to get out of there. The only thing we could do was knock on the door asking, “Are you alive?” and getting “Yes” in response. Good thing the yacht had two latrines.

To sum it up, the deck can always be rinsed with a bucket of water, so don’t be afraid to make a mess there. It’s way more difficult to help a person out of the latrine and even more difficult to “fish” those who wished to vomit over a handrail out of the sea. It is really dangerous when the swell is high, especially for the first-timers. Along with nausea, they may have dizziness combined with weakness. In a nutshell, our choice is the following: better use a bucket if there is one. If there is no bucket out there, no worries – you can vomit right on the deck or the aisles alongside. The key thing here is staying in the cockpit. 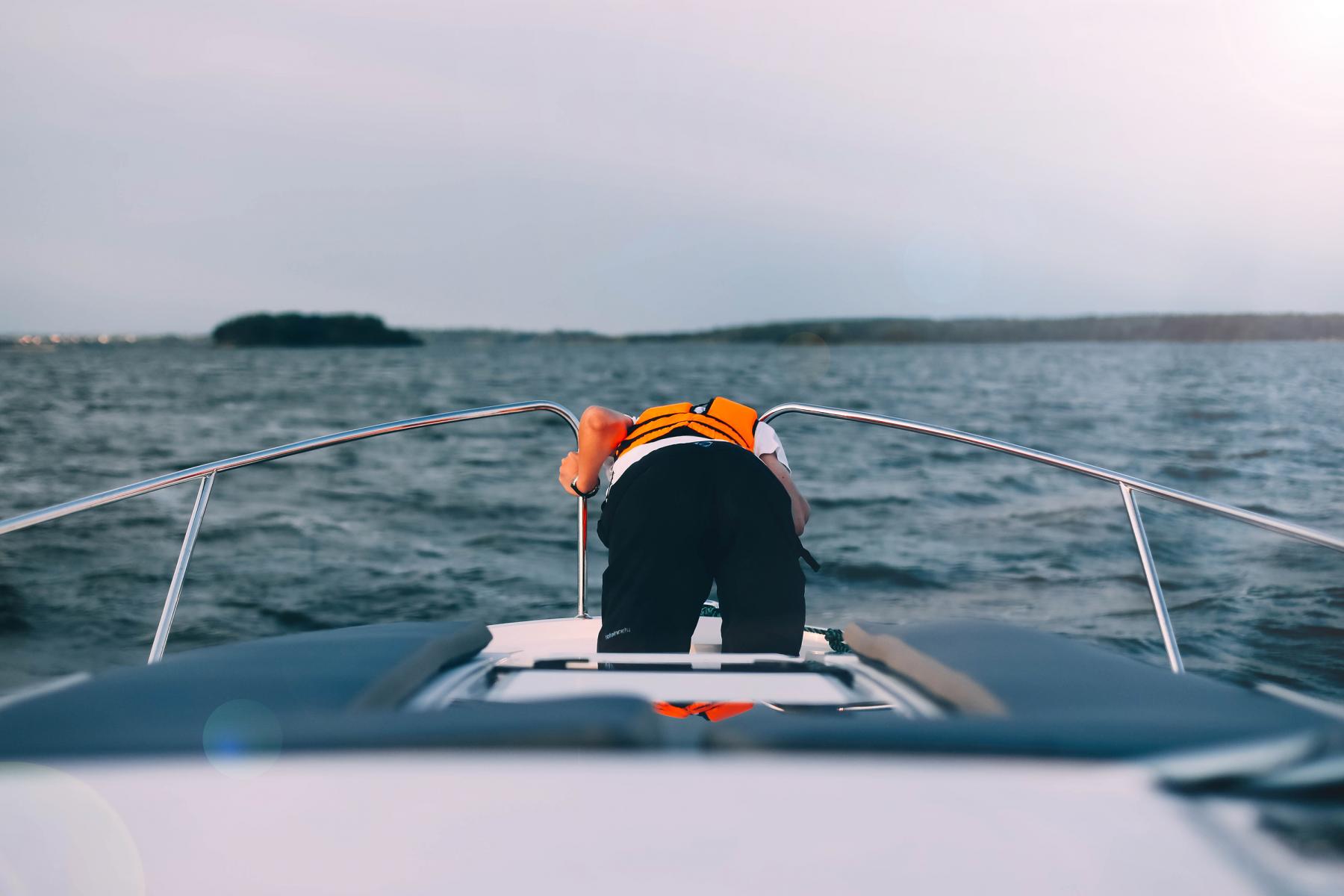 Here are the symptoms telling that your body has got used to the motions:

You have to get used to the swell again after several months spent on the firm ground.

However, it will be easier than the first time around. On one hand, the body “remembers” its previous experience, and on the other hand you develop an ability to listen to your body and take precautions.

You can monitor the wind in real time on live wind map.

Where to go sailing in Autumn