Why are giant craters in Siberia increasingly more common

In 2014, a giant crater of uncertain origin was discovered in Yamal Peninsula of Western Siberia. In this lesson of the Windy.app Meteorological Textbook for better weather forecasting you will learn what Siberian craters are and why this phenomenon is going to keep appearing in the future.

What breaks through the eternal ice

Permafrost, or permanently frozen soil, is a layer of ground that has been frozen for thousands of years. It lies just 2 meters below the surface level in vast areas of Eurasia, North America, and Antarctica.

Aside from water and rock, this layer contains plenty of hydrocarbon gases, 99% of which is methane. One cubic meter of permafrost can contain up to 50 g of methane.

When the frost thaws, the methane is released and rises to the surface. The soil also contains a lot of organic matter: the remains of animal and plant life from thousands and millions of years ago. When unfrozen, this matter starts decaying with the help of microbes, which also... yes, release methane. 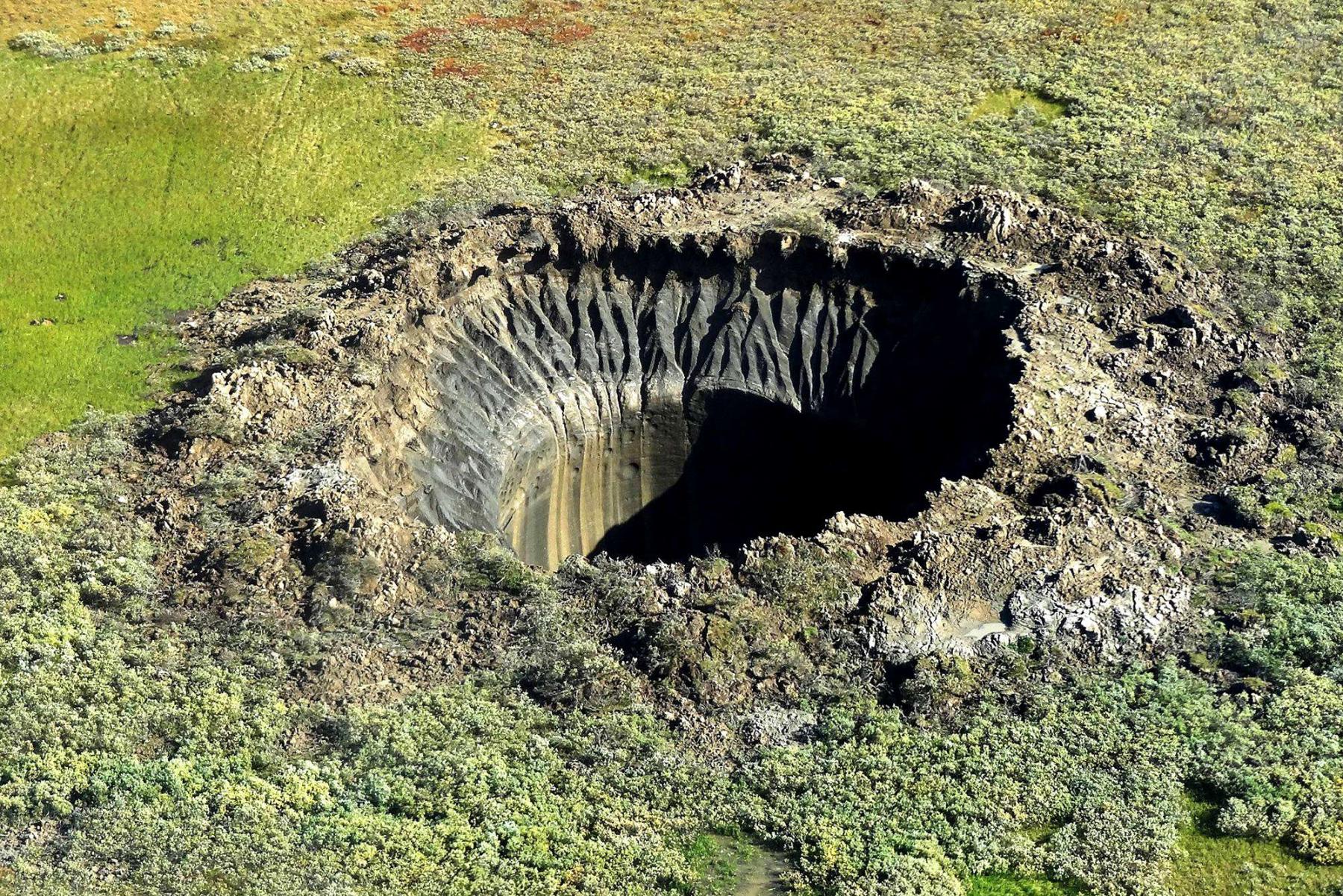 The Yamal crater discovered in 2014 is one of the first known gas emission craters. Photo: Vasily Bogoyavlensky / AFP / Getty Images via Cnn.com

As you can well imagine, if enough methane is collected somewhere (because the earth’s density doesn’t allow for a slow, gradual leak), the gas can rush out in an explosive manner, Such releases at minefields have already been known for some time, since the 1930s if not before. They are often connected to another known phenomenon, pingos, when ice-cored hills are formed, leaving behind craters after the ice melts.

The mechanism is simple: the gas accumulates under the surface, and the hill keeps growing until the pressure gets to a critical point. After that, the methane breaks out, and a crater is formed. If the gas is ignited, there is also an explosion. The locals report thundering, cracking sounds.

You would think that everything is clear and simple. But there is one important detail to remember: the post-pingo craters are normally from 1 to 25 m in diameter and only 2 to 5 m deep. The crater discovered in Yamal, however, could comfortably hold a multi-story building!

Seems pretty obvious that the recent craters in Siberia are in some way different from the familiar pingos. And we don´t know that much about them.

Scientists call craters similar to the one discovered in Yamal gas emission craters because of how they are formed. They are typically 20 to 30 m in diameter and 20 to 70 meters deep. The crater is surrounded by a wall of ejected soil similar to that formed around an impact crater (for example, when a meteor hits the ground). This soil can often be found as far as 100 meters from the crater. 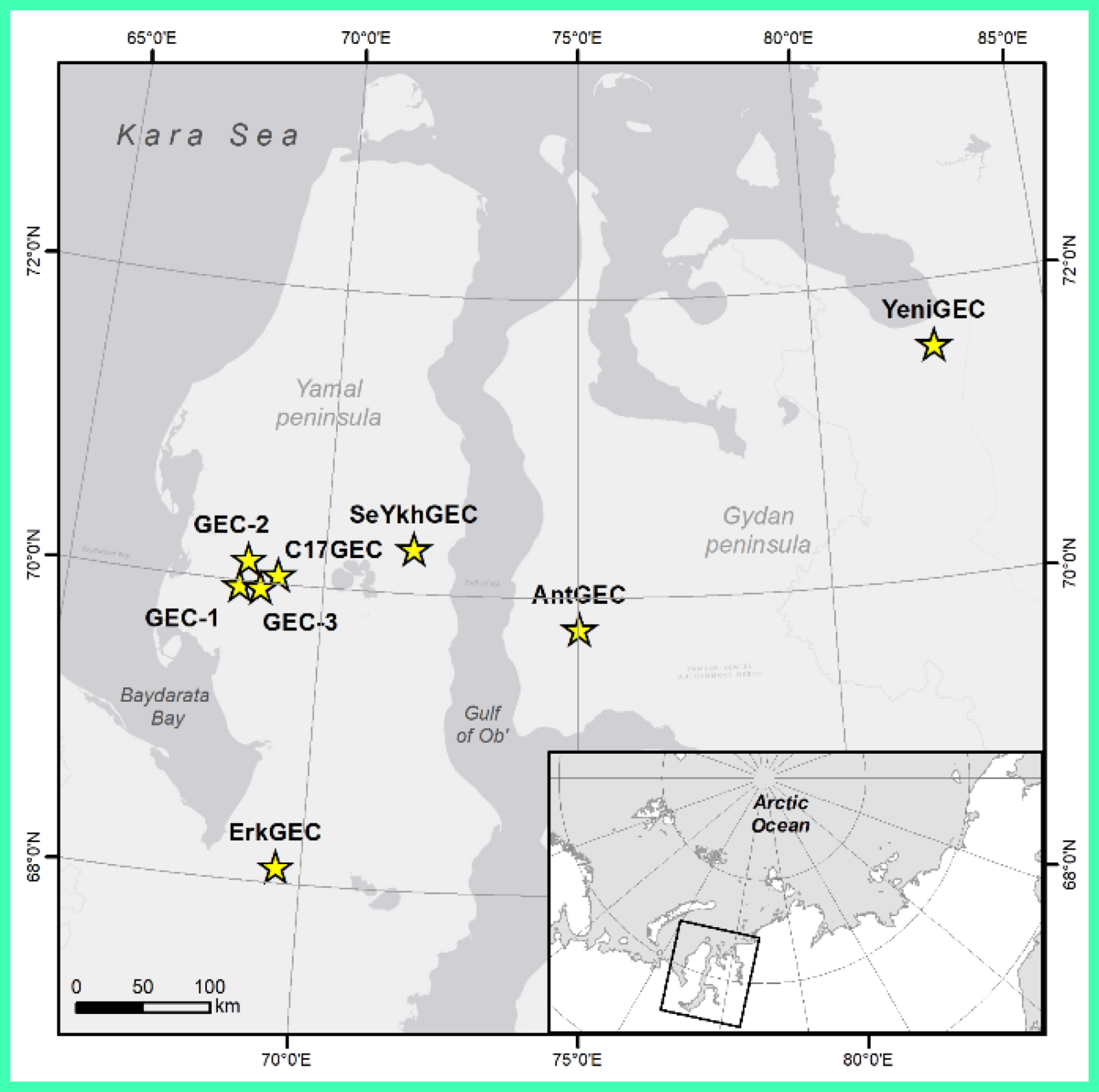 Frozen soil is found on the walls of the crater, confirming that the gas broke through the permafrost. And if you are fast enough to take air samples, the methane level would normally be increased. Such craters also can’t be classified as pingos because it is not always possible to prove the existence of a hill before the breakout.

In 2022, a couple of dozen similar craters were found, all of them in Western Siberia, on the Yamal peninsula or around it. It is not yet clear why, with all of the active satellite observation,similar craters are not found in the Arctic regions of the Western hemisphere or in Antarctica. Maybe it has to do with the unique conditions of the Siberian permafrost and gas deposits in this zone.

Scientists also cannot agree about the origins of these craters. Some of them believe that oil deposits “warm up” the frost from below; others think that the warmth comes from superficial water bodies. The third hypothesis points to cryovolcanism, a phenomenon similar to volcanism that is known to happen on some bodies of the Solar system, such as Pluto and Titan, where water and methane erupt instead of hot magma.

Another popular hypothesis connects the appearance of the craters with climate change: as the climate is most notoriously getting warmer in the Arctic, the permafrost there thaws the fastest, releasing methane.

If this last hypothesis is true, the number of craters will only grow as the temperature rises. This is a threat to local settlements and infrastructure, as well as to the world climate. We can’t forget that methane is a greenhouse gas, and the hotter it gets in Siberia, the more methane is released, and this goes in a cycle, further tightening the spiral.

At this stage, however, there are too few craters to make a noticeable contribution to climate change. And to be sure about the connection between the appearance of the craters and global warming, we need more studies. But either way, we can say for sure–if you find yourself wandering around a barren ice-covered landscape somewhere in the Arctic tundra, DO NOT get close to suspicious hills!

Text: Jason Bright, a journalist and a traveller

Take WMT lessons on other rare and common land phenomena

The origin of Antarctica's Blood Falls

Quicksand and how to get out of it

How does volcano work