Cumulus cloud is one of the most common and distinctive types of cloud. In this new lesson of the Windy.app Meteorological Textbook (WMT) and newsletter for better weather forecasting you will learn more about cumulus clouds.

What are cumulus clouds?

On a sunny day we tend to see cumulus clouds looking like floating cotton wool balls. These puffs of cotton strewn around the sky are actually low-level clouds with a flat base. That's why cumulus clouds are often called "Cotton wool in the sky". They look as if they are rather large, thick clouds which could be quite high.

Cumulus clouds are formed in presence of rising currents of warm moist air. This usually happens in pockets which are warmed by the sun. 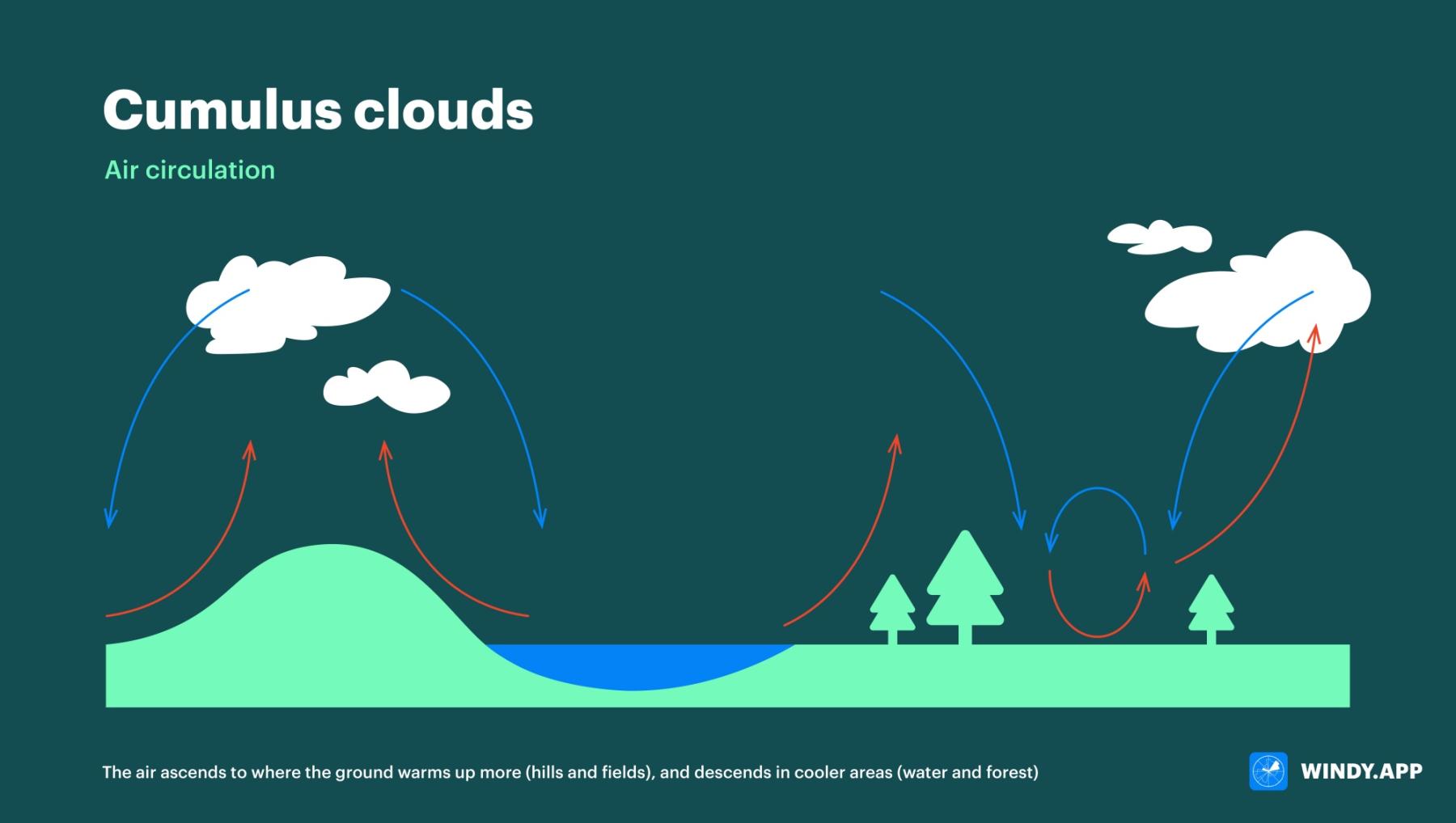 The air ascends to where the ground warms up more (hills and fields), and descends in cooler areas (water and forest). Illustration: Valerya Milovanova / Windy.app

As air is heated by the surface, it becomes lighter, less dense and begins to rise. A similar process occurs under water, when a very dense medium pushes up much less dense air bubbles.

The air will rise as long as the surrounding air is cooler (i.e. denser and heavier). However, dry air alone is not sufficient for forming cumulus clouds — the ascending flow of air also lifts water vapor into the sky. Water vapor consists of tiny droplets water in a gaseous state.

Rising higher and higher, into colder layers, the air starts to cool down. When it collides with dust, soot, pollen and other small particles in the air, the recently evaporated water turns into liquid again. In this transformation, known as condensation, the water vapor releases latent heat into the surrounding air, which helps the ascending air flow to drift up.

The air flow slows down as soon as it reaches an altitude beyond which it is more difficult to rise due to the temperature. As the air humidity rises, condensation occurs more often and this is when cumulus clouds begin to form.

What to expect from cumulus clouds?

The height of cloud formation depends on the amount of moisture in the thermal that forms the cloud. More humid air will result in a lower cloud. The base of a cumulus cloud is usually between 500m and 1,500m, but it can reach up to 3,000m in altitude. In mountainous and arid areas, the cloud base can be up to 6,000m above sea level.

It always starts, and sometimes ends, with a flat base called cumulus humilis. Such clouds are quite wide and not very high.

With a stronger ascending flow of air and faster changes of air temperature with height, the moisture rises higher pushing the cumulus cloud higher. In conditions favorable for the rise of moisture, a cumulus humilis cloud can turn into a cumulus mediocris, which is approximately the same in both width and height.

If the conditions are even better, cumulus mediocris can tower high. Such clouds where the height exceeds their width are called cumulus congestus. 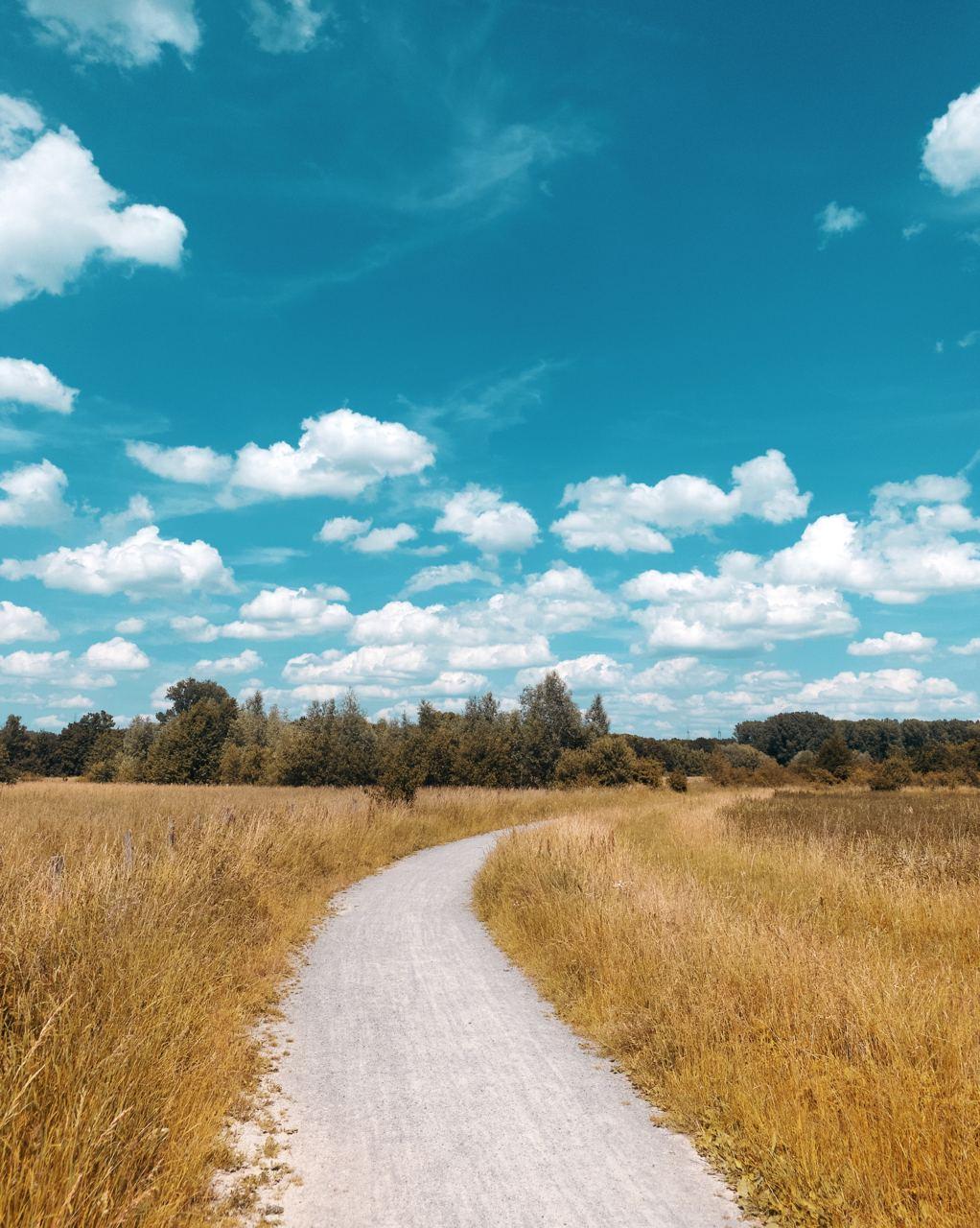 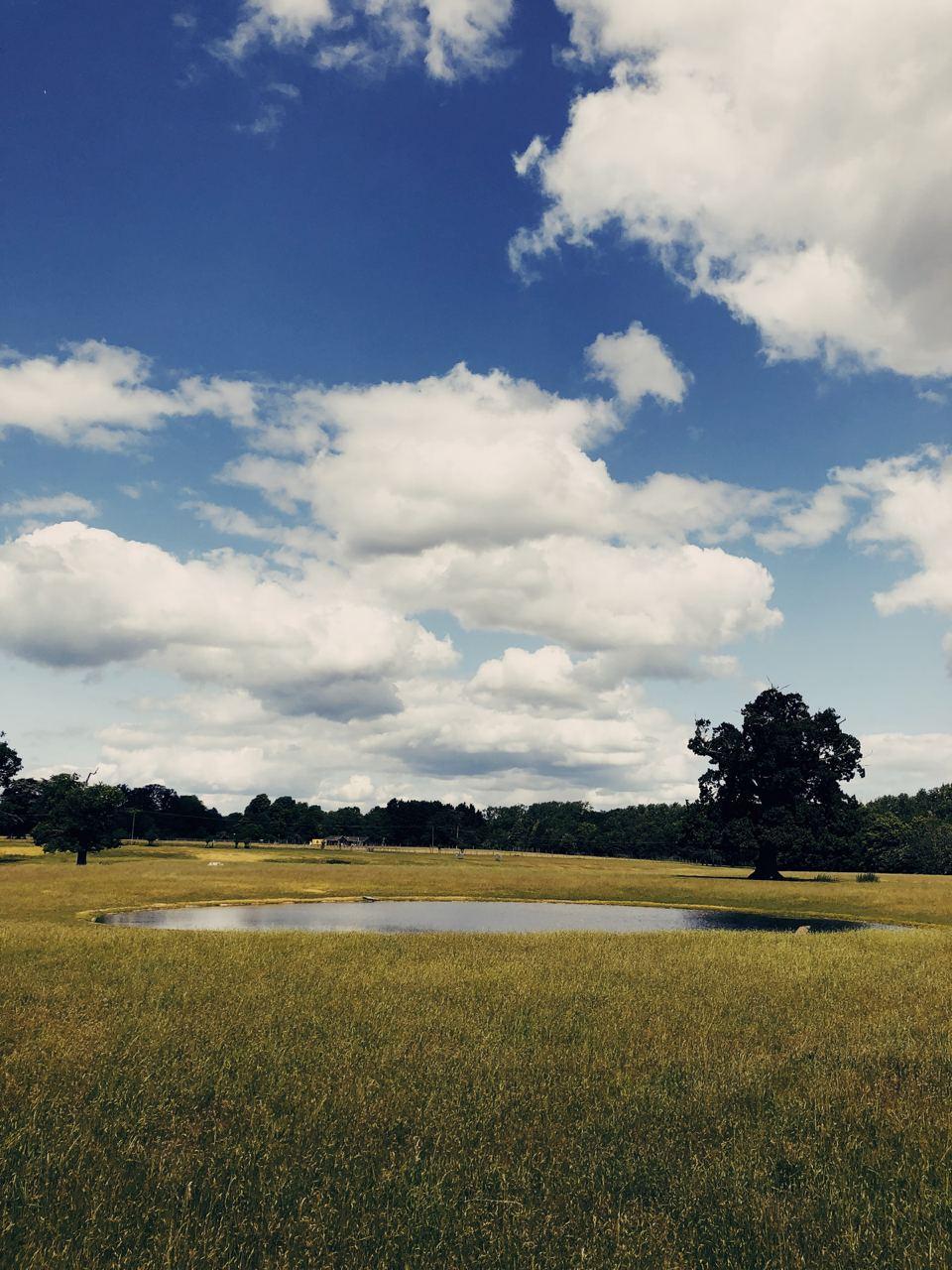 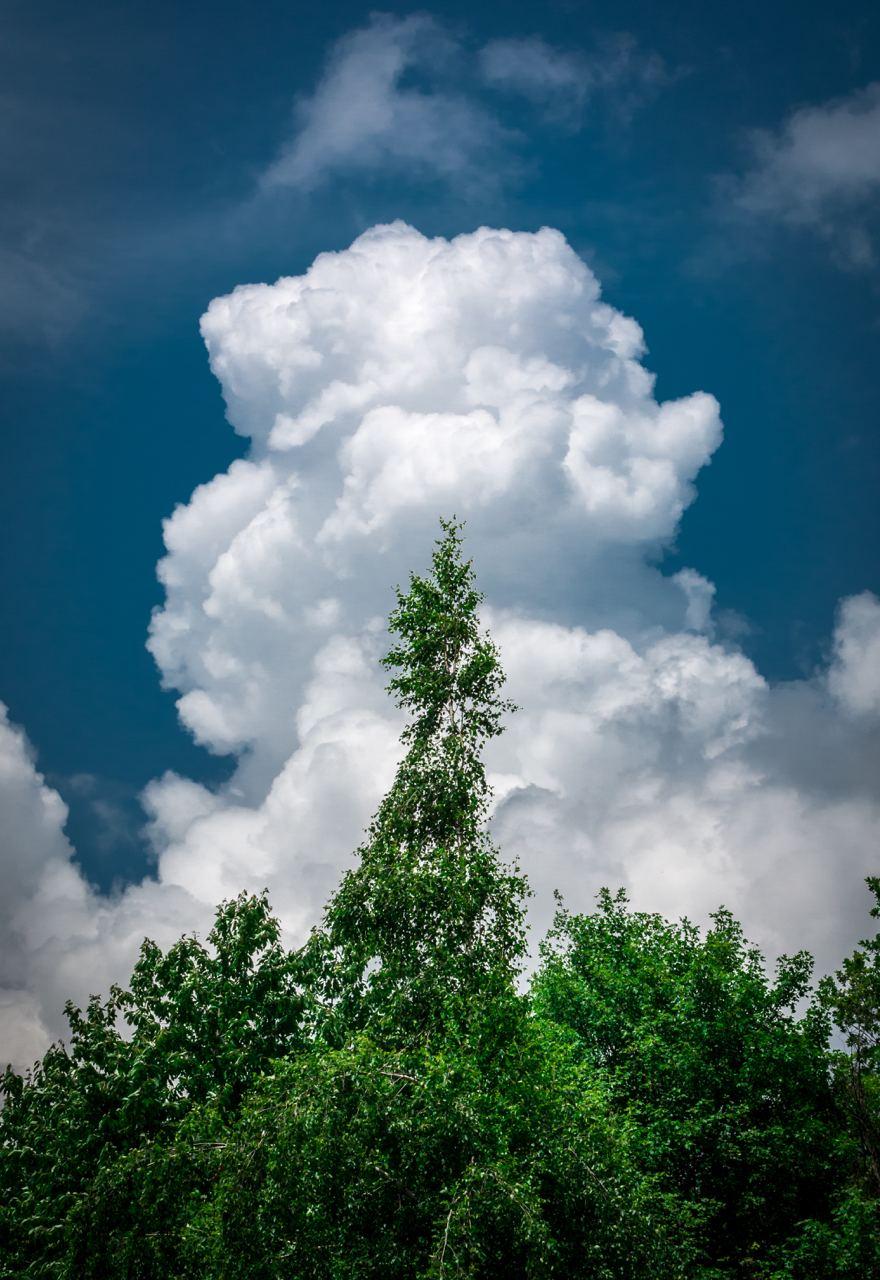 Cumulus clouds are most often seen in fair weather as they require a lot of sunshine to form. As a rule, they don’t produce precipitation. Cumulus congestus, however, are more indicative of a coming storm. The reason is simple: in conditions of high humidity such clouds can grow into cumulonimbus clouds which produce heavy rain.

Cumulus clouds can be indicators of rising thermals underneath or around them. Glider pilots often try to catch such thermals to climb higher. Other beneficial properties of any clouds, including cumulus, is their reflectivity. They reflect some of the solar radiation back into space, which helps to cool the earth.

Where to find and how to forecast cumulus clouds in the Windy.app?

For instance, for a cumulus cloud to form, the blue curve on the diagram must be to the right of the red one. This means that the temperature of the rising air, marked with the state curve (blue), decreases more slowly with altitude than the air temperature, marked with the stratification curve (red). 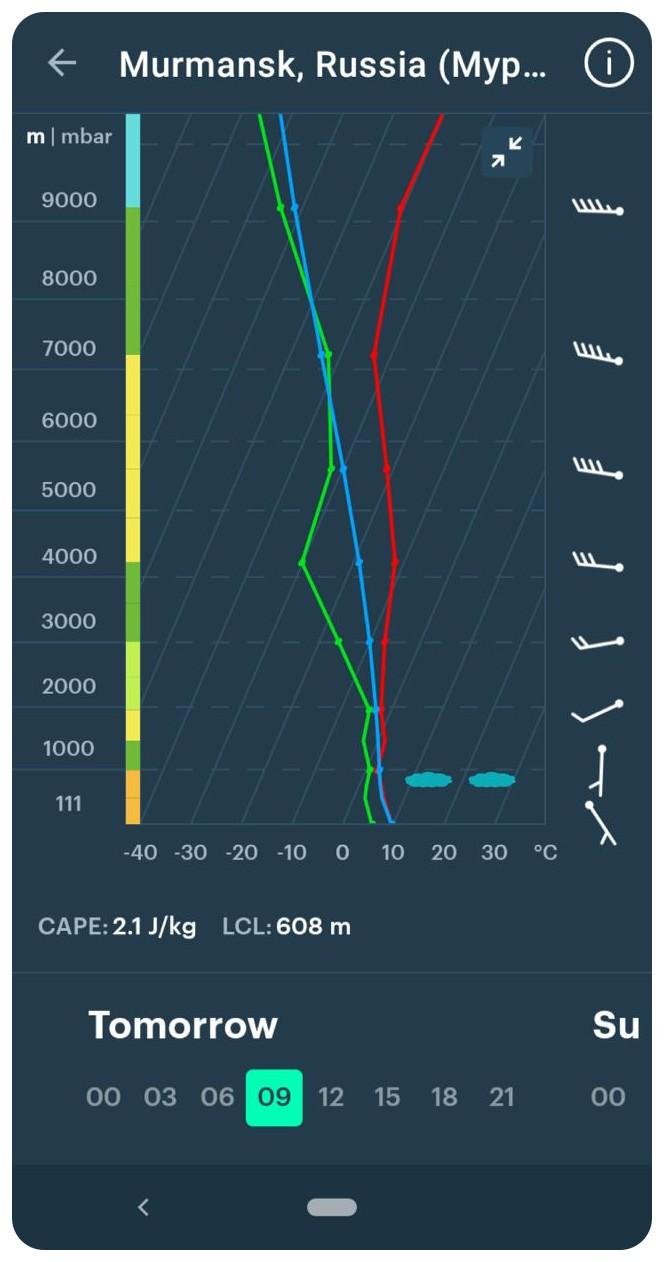 Clouds forecast with an Aerological Diagram in the Windy.app for Android 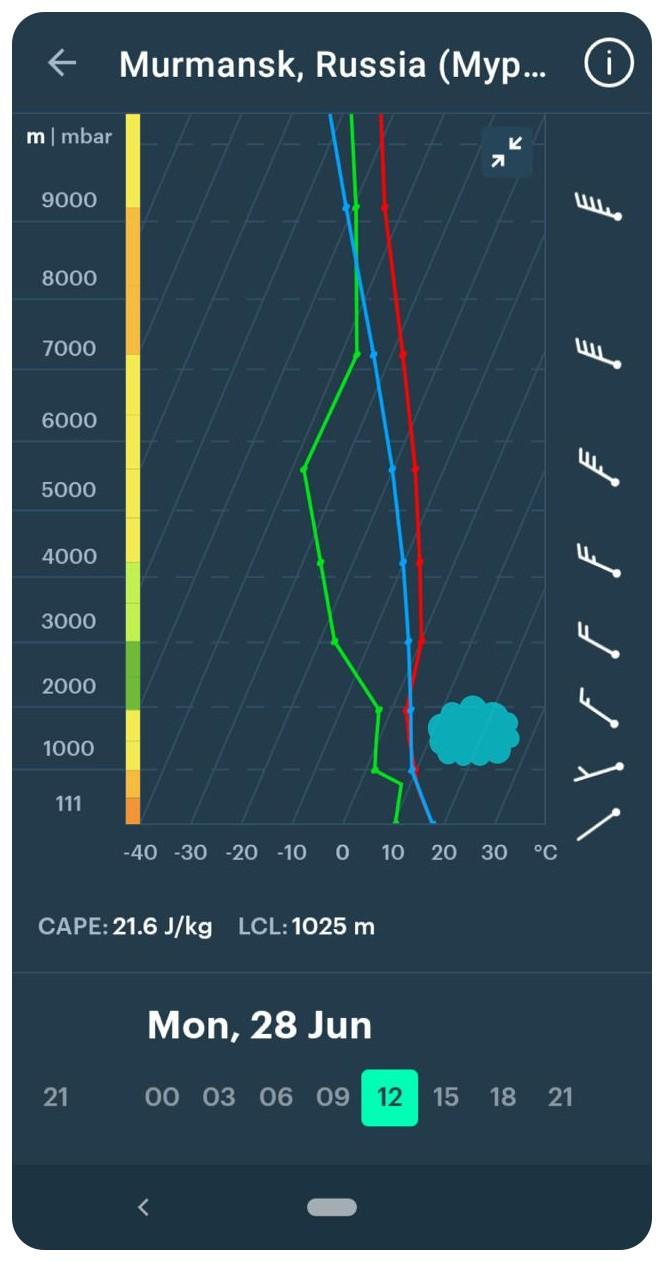 Clouds forecas with an Aerological Diagram in the Windy.app for Android 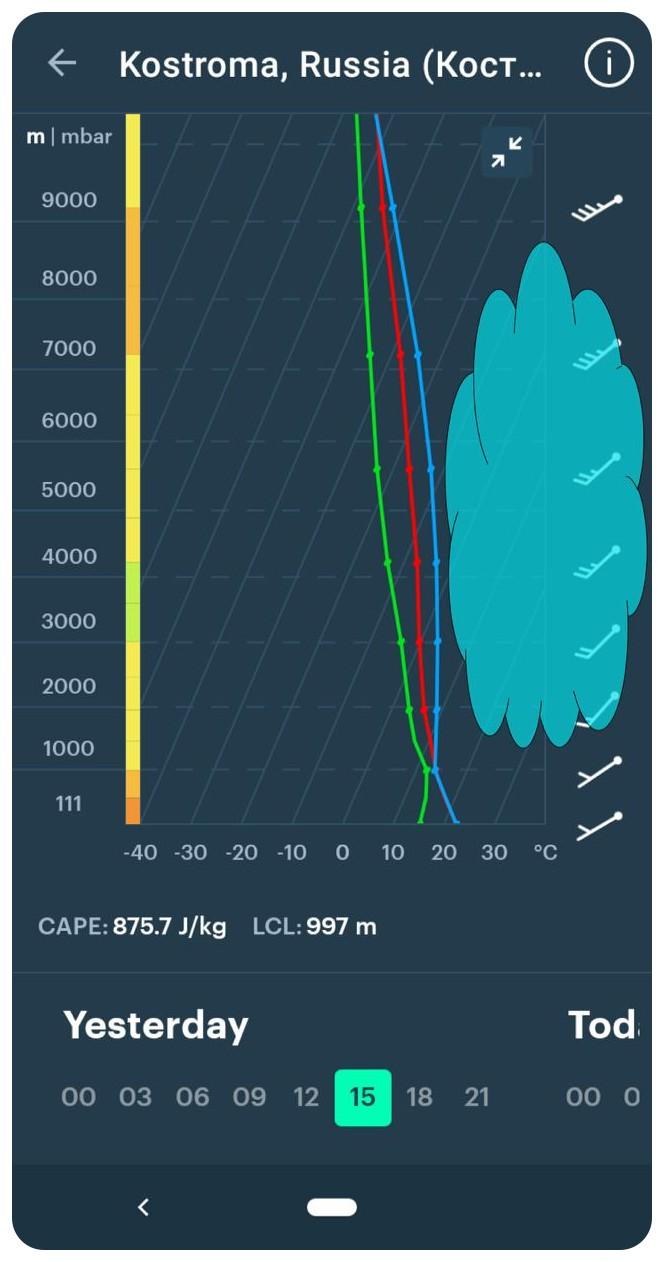 Clouds forecast with an Aerological Diagram in the Windy.app for Android

The CAPE (Convective Available Potential Energy) Index is another useful source of information. The higher its value, the more unstable the atmosphere (i.e., the temperature of the air changes more with height), and cumulus congestus clouds are more likely to develop.

You can find CAPE Index in the Air Weather Profile in the Windy.app for iOS and Android: 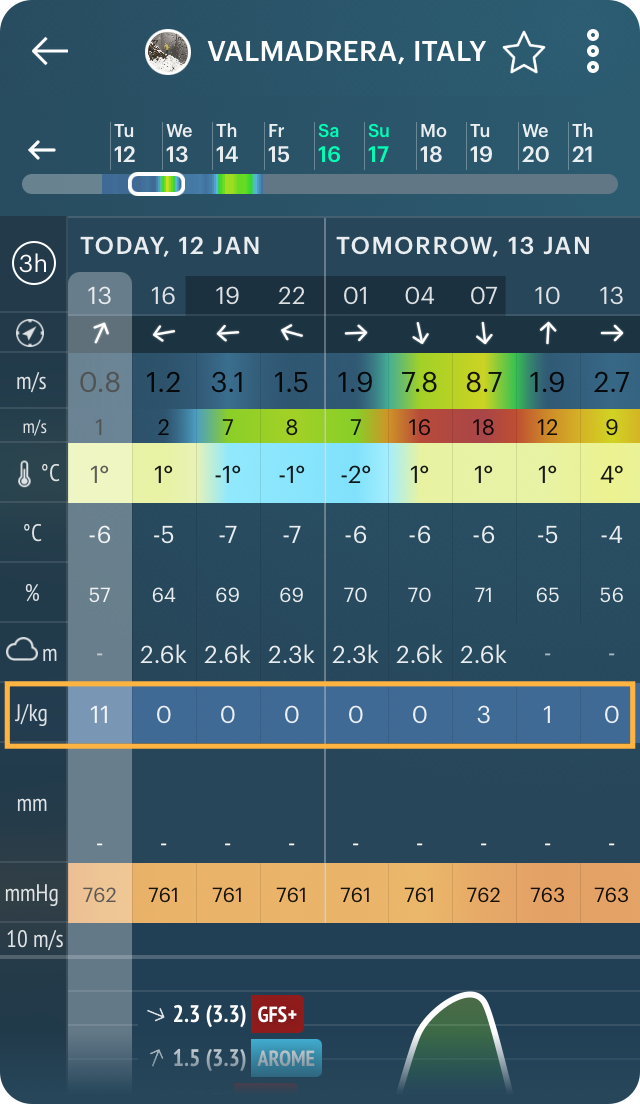 CAPE Index for Valmadrera, Italy, outdoor spot in the Windy.app for iOS

How do night-glowing clouds form?