Nimbostratus clouds and the precipitation they cause

Nimbostratus are low level clouds and their base generally lies between 100m and 1km. Thick fog and consistent precipitation beneath nimbostratus clouds create an impression of a dreary and gloomy day. The cloud has a distinctively diffuse base so it is hard to tell where the layer of fog ends and the cloud begins, which often leads to low visibility. The height of these clouds is usually around 2-3km but rarely exceeds 5km. Flying beneath nimbostratus clouds is considered hazardous because of the reduced visibility.

Nimbostratus clouds have considerable vertical extent and are often characterised by heavy precipitation. At elevations above the freezing level, some water droplets in the cloud freeze and turn into ice crystals. This heterogeneity of the composition when some of the cloud particles remain liquid, while others are solid, is a necessary condition for the formation of heavy precipitation. This differentiates nimbostratus from stratus clouds. Although they look similar from below, stratus clouds have much less vertical extent and may cause periods of light precipitation or drizzle.

Nimbostratus clouds most often occur along warm weather fronts. Let’s look at what a front is and how it helps clouds form.

What is a weather front?

Let’s have a brief look at cyclones and anticyclones. Cyclones rotate counterclockwise in the Northern Hemisphere and clockwise in the Southern. In temperate latitudes, cyclones give rise to expansive layers of nimbostratus clouds. In the Northern Hemisphere, there are two main centers of their formation: the Aleutians (a chain of islands near Alaska) in the Pacific Ocean and Iceland in the Atlantic. Both places are characterized by the close proximity of cold and warm air. The northern coast of Alaska is bathed by the cold Arctic Ocean, while south of the peninsula, the ocean gets relatively warm as the Kuroshio Current transports warm water from Japan. The same happens in Iceland: Greenland brings cold air to the north of the country, while the North Atlantic Current (Gulf Stream) warms it in the south. 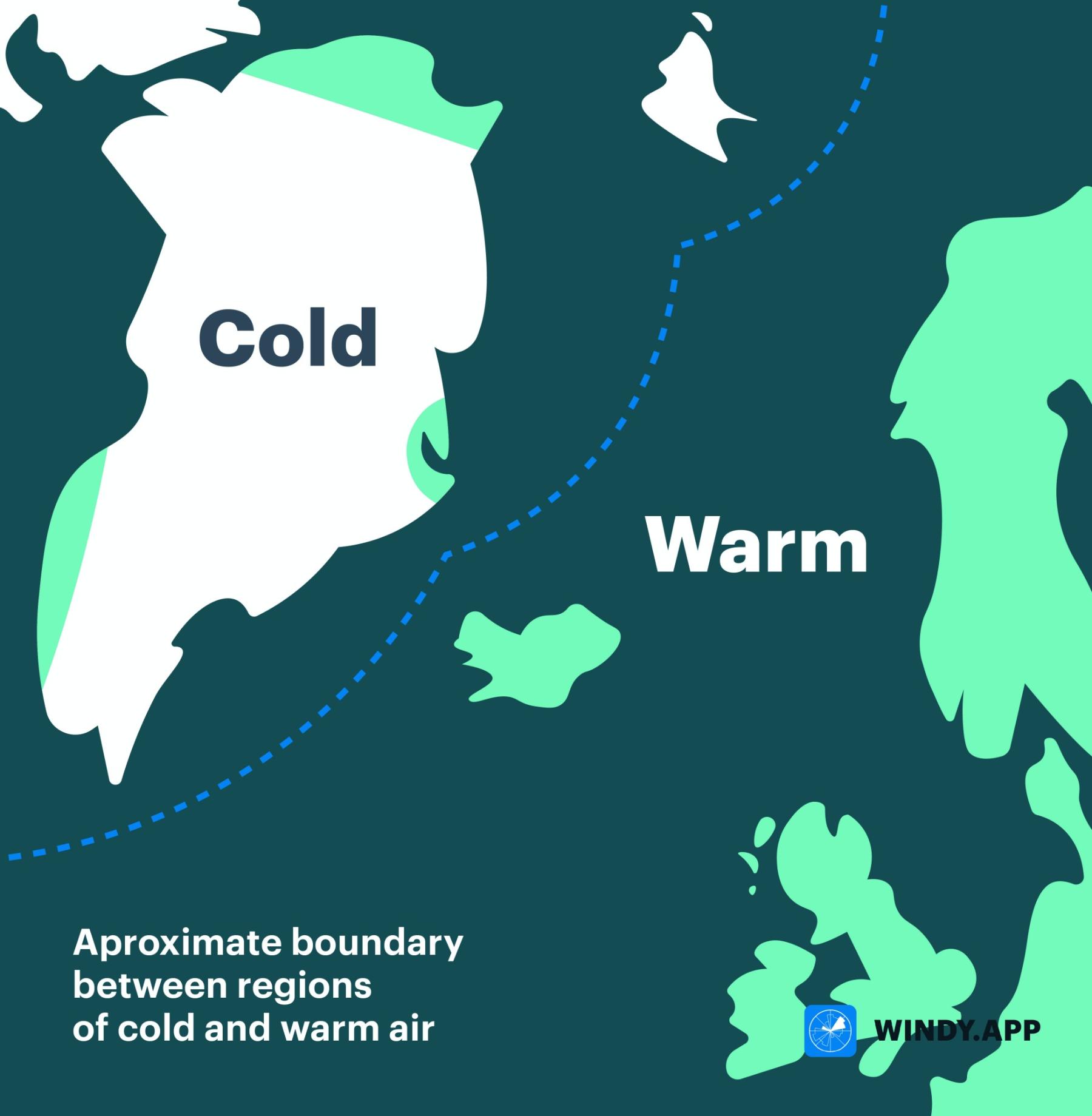 When a cyclone, with a large-scale air mass rotating within it, develops over Greenland or Alaska, warm air begins to flow northward, and cold air moves southward. Temperature contrasts between north and south are very sharp and it stops air masses with different temperatures from mixing. Instead, the warm air takes the cold air even further north, while the cold air from the opposite side pushes the warm air further south. The bands where air of different temperatures collides are quite narrow compared to the size of the cyclone and they are often simply called “lines”. 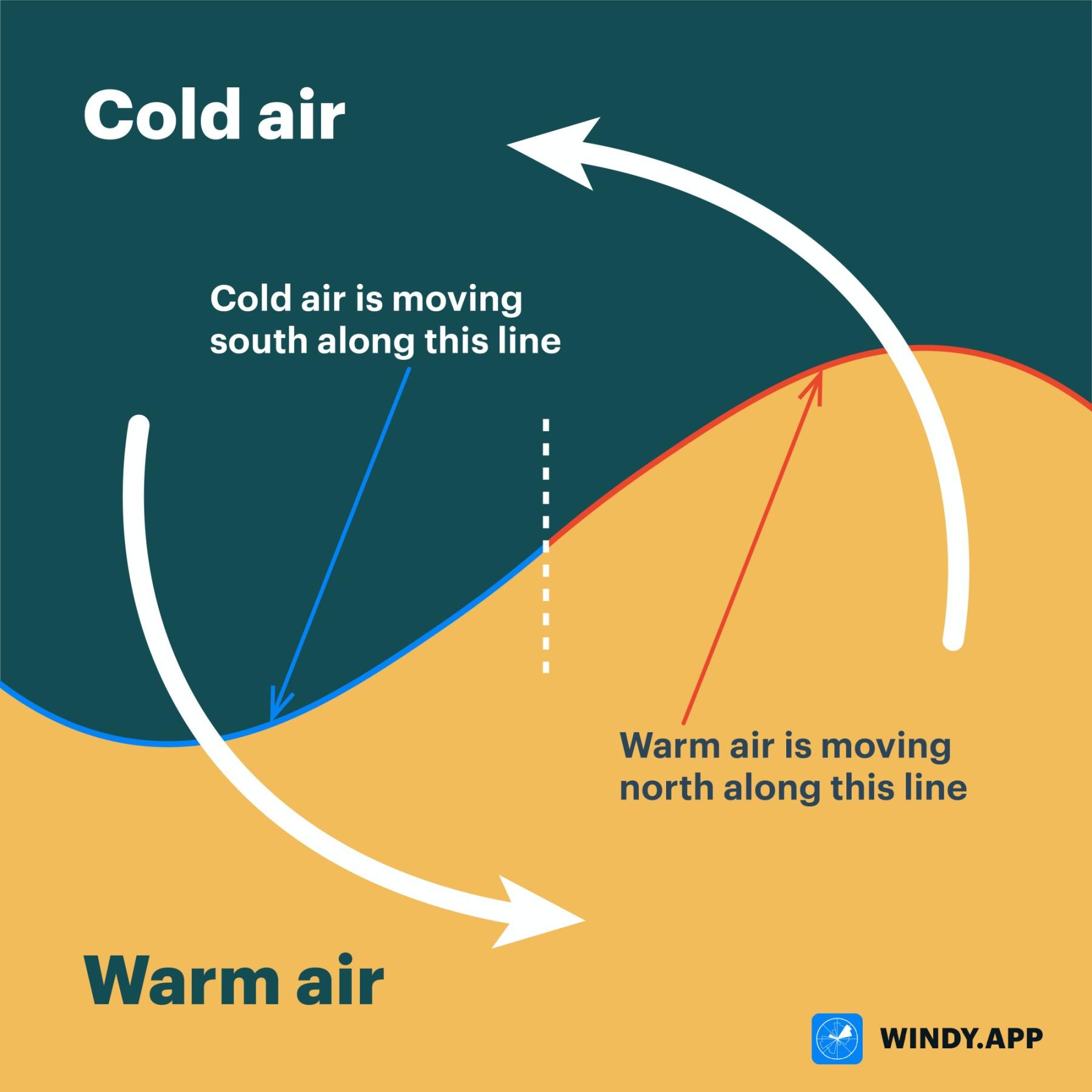 A large-scale mass of cold and warm air rotating within a cyclone. Illustration: Valerya Milovanova / Windy.app

A line formed by the movement of warm air northward is called a warm front. The line moving towards the south is called a cold front. Powerful air moving upwards in both fronts bring clouds and heavy precipitation. As we have already learned, cumulus clouds are formed when the surface is heated and the energy from the condensation of water vapour is released. This process of air movement due to its own heating is known as free convection. On the fronts, however, the process looks slightly different and is called forced convection.

Let’s take an example of a warm front. When warm air begins to move north, it collides with cold air and pushes it north. Since warm air is lighter than cold air, part of the warm air begins to gradually advance onto the cold air and rise up. Cold heavy air acts as a natural obstacle that warm air is forced to flow around from above, which is why we are talking about forced convection. As the warm air ascends, it cools down, and causes the water vapour to condense. This process is very similar to the formation of fog. Thus, the clouds along the warm front can be called fog which is resting high in the sky.

Nimbostratus, unlike cumulus clouds, do not form as separate cells but become components of a large cloud front system. The formation of nimbostratus clouds occurs when the layer of altostratus clouds, which are usually observed before nimbostratus, becomes dense. As a result, we see a huge cloud blanket over the whole sky. An atmospheric front line can reach up to several thousand kilometers in length, and several hundred kilometers in width.

How to forecast nimbostratus clouds?

Let’s have a look at the aerological diagram. If you see that the stratification curve and the dew point curve are very close to each other from the surface to a height of 3-6km, the formation of nimbostratus clouds and continuous precipitation are highly likely. 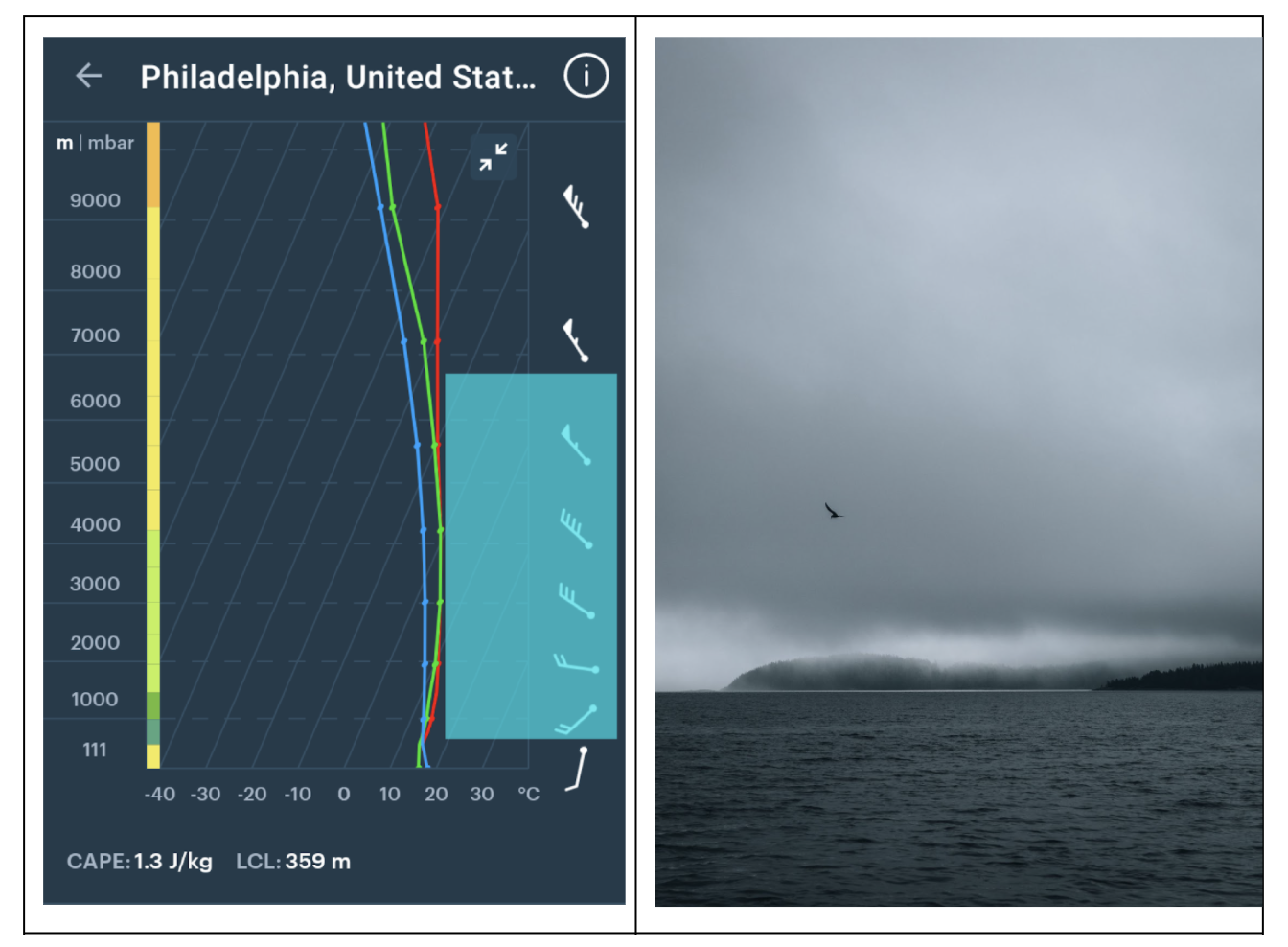 What to expect from cumulus clouds

How do night-glowing clouds form

What is virga and how does it work