What is freezing level chart in your weather forecast? Yes, it is about snow but not only

With the beginning of summer in the Northern Hemisphere, we almost forget about winter snow sports, and perhaps the fact that the snow has not yet melted everywhere.

However, while it may rain on a plain somewhere in Venice, Italy, the mountain peaks in the Dolomites just 100 km (62 mi) of the sea coast, are still covered with snow. The explanation for this is the freezing level. It is measured with the same instruments as the other weather parameters: weather stations, radars, probes, satellites, and so on.

In this article, we will figure out what it is and how to read the freezing level chart for your favorite summer or winter sport and outdoor activity.

What is freezing level?

The freezing level is the elevation at which the air temperature is 0 degrees Celsius, 32 degrees Fahrenheit, or 273 degrees Kelvin. At this temperature, water freezes, including particles of moisture in the air*.

The freezing level is not the same in different places. In general, it descends in cold and humid areas and rises in dry and warm areas. That is, the farther from the equator, the lower the line.

It is also not the same for different seasons. For example, in winter, in mid-latitudes, the freezing level is equal to the surface of the earth or may even be below it. In summer, on the contrary, the figure is as high as possible. Again, this is because the atmosphere is colder in winter and warmer in summer. 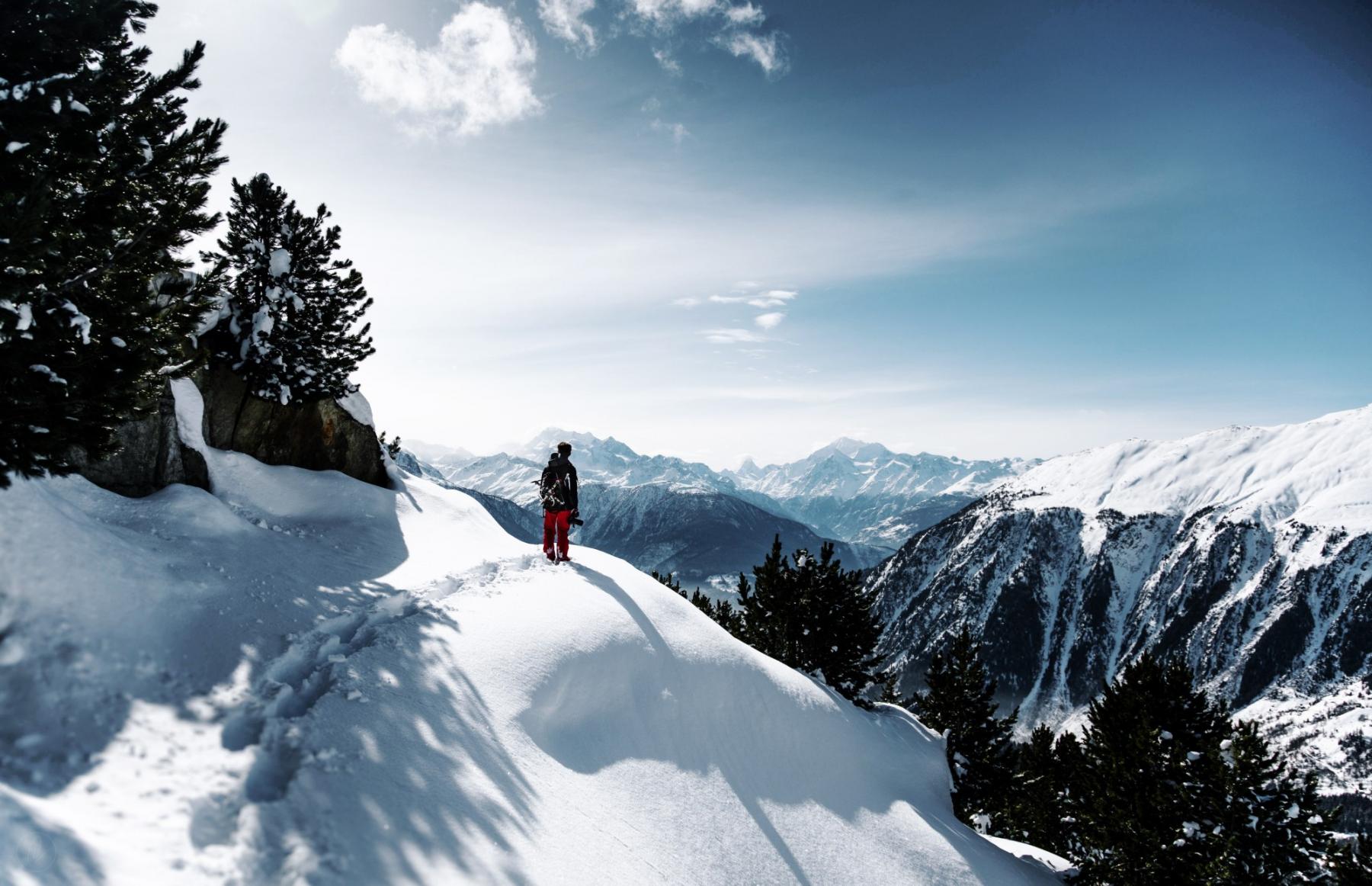 In addition, the freezing level may change in one place and in one relatively short time interval. These changes are caused by changes in different weather parameters.

For example, freezing level may be affected by air density (which can vary due to warm and cold weather fronts), humidity levels, winds, and other things. Therefore, the forecast of the freezing level can be considered as accurate as possible for a period of one to three days — just like with a regular weather forecast.

This weather parameter is not usually available in general weather forecasts, but it can be found in special forecasts where this parameter is important — for example, in the mountains, and for aviation needs.

Speaking of mountains and aviation. The concept of the freezing level should not be confused with the concepts of the snow level (usually in the mountains when skiing) and icing level (this parameter is important for aviation). These are related but still slightly different things.

We will talk about this in other articles, so bookmark this one to come back to it in winter and learn more.

How to read freezing level chart?

Let's take Windy.app as an example, where the freezing level for the popular ski spot Passo Tonale in Italy looks like this: 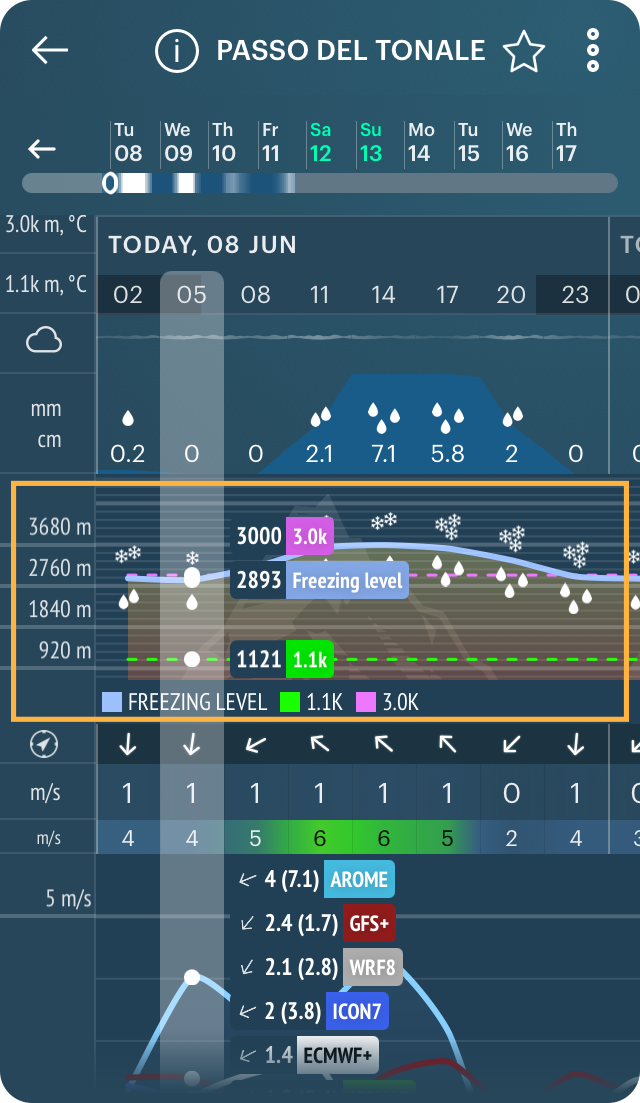 The blue line on the chart labeled Freezing level with the numbers to its left shows exactly at what altitude the temperature is 0 degrees. Above the freezing level, it snows, and below it, it rains. Again, that's the difference.

You also see the forecast for snow and precipitation at the same time: one and two drops of water or snow mean less and more rain and snow, respectively.

Finally, in addition to the freezing level, here you have two other lines of the altitude for the lowest and the highest point of the resort, where the elevator can take you. For example, for the same Tonale Pass in Italy, it is 1100 m (3,608 ft) and 3000 m (9,842 ft), respectively. From the latter height, you can go down on skis.

There are no these ski lines in the freezing level chart for some city, but you can still see the altitude for that spot represented by the orange line — like for the city of Bergamo in Italy (289 m): 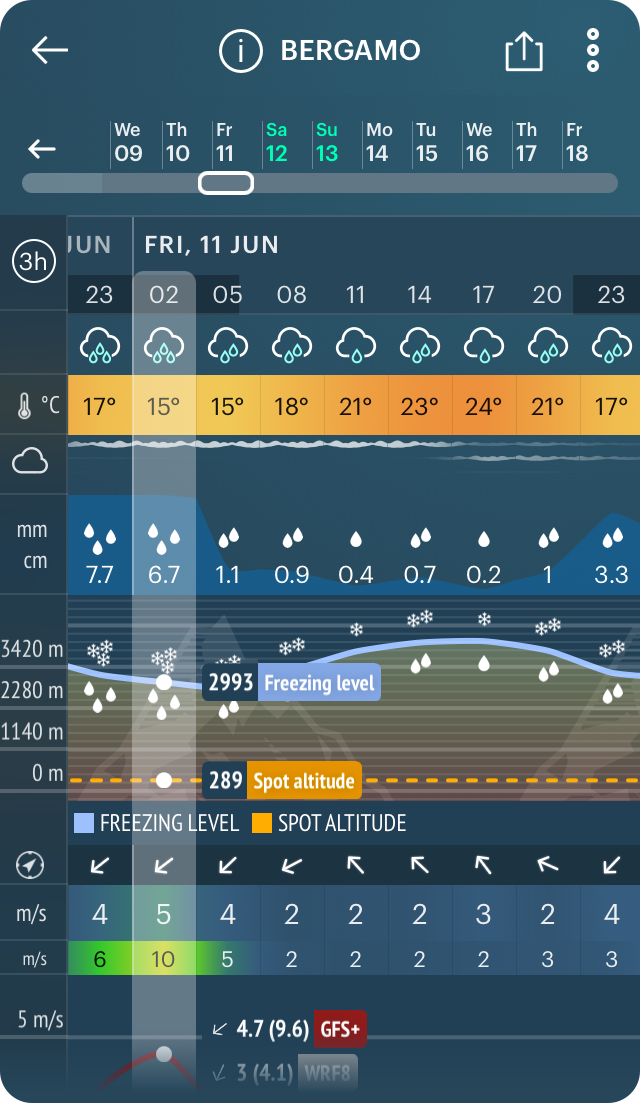 Freezing level chart in Bergamo, Italy in the Windy.app for iOS / Windy.app

What is considered a low freezing level?

For example, in the southernmost city in the world, Ushuaia, in Argentina, at the tip of the South American continent, where it is winter now, the freezing level is quite low at 460 m (1,509 ft) above sea level. The spot is also at sea level: 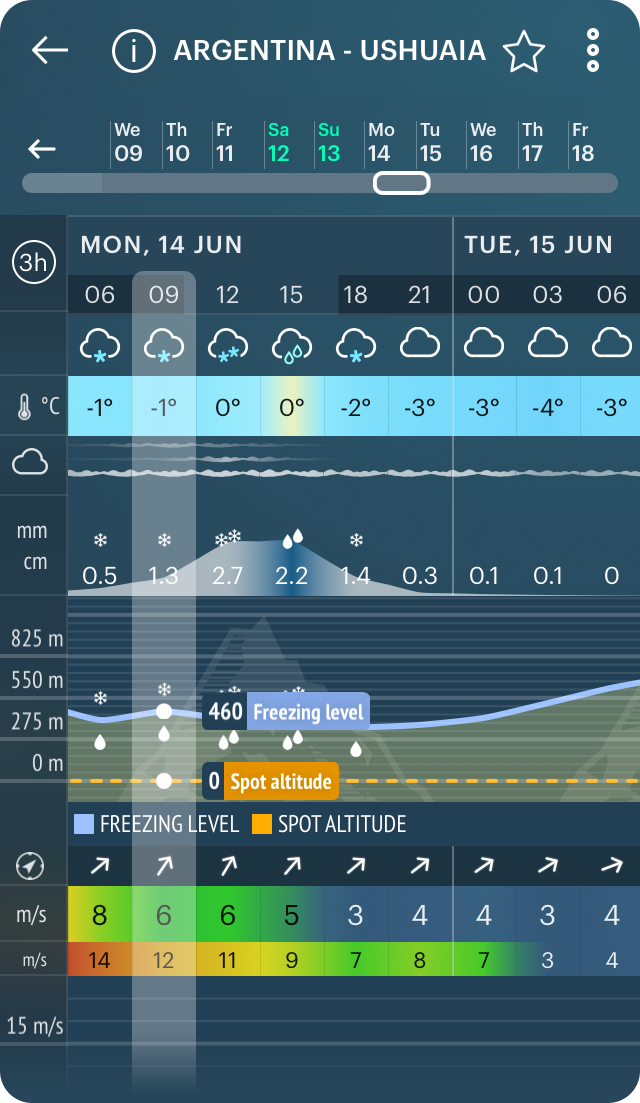 Freezing level chart in Ushuaia, Argentina in the Windy.app for iOS / Windy.app

But there are more interesting things here that you can find in Windy.app: in the city of Svalbard on the Norwegian Svalbard Islands, the freezing level is even lower than the ground level by 3 m (9.8 ft), 26 and 29 m (85 and 95 ft), respectively: 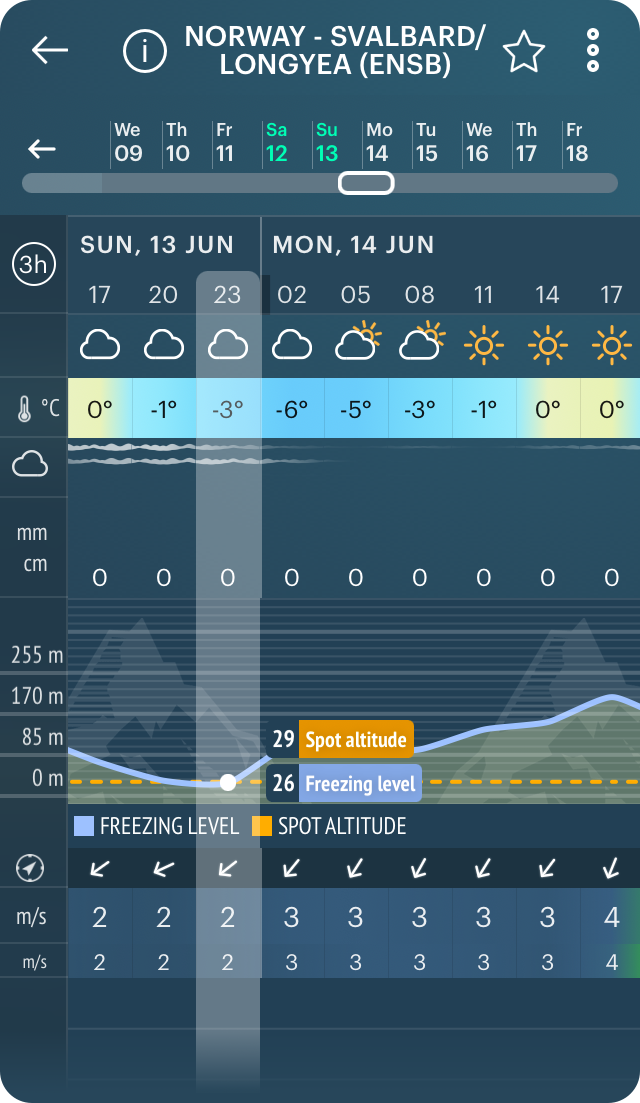 Freezing level chart in Svalbard, Norway in the Windy.app for iOS / Windy.app 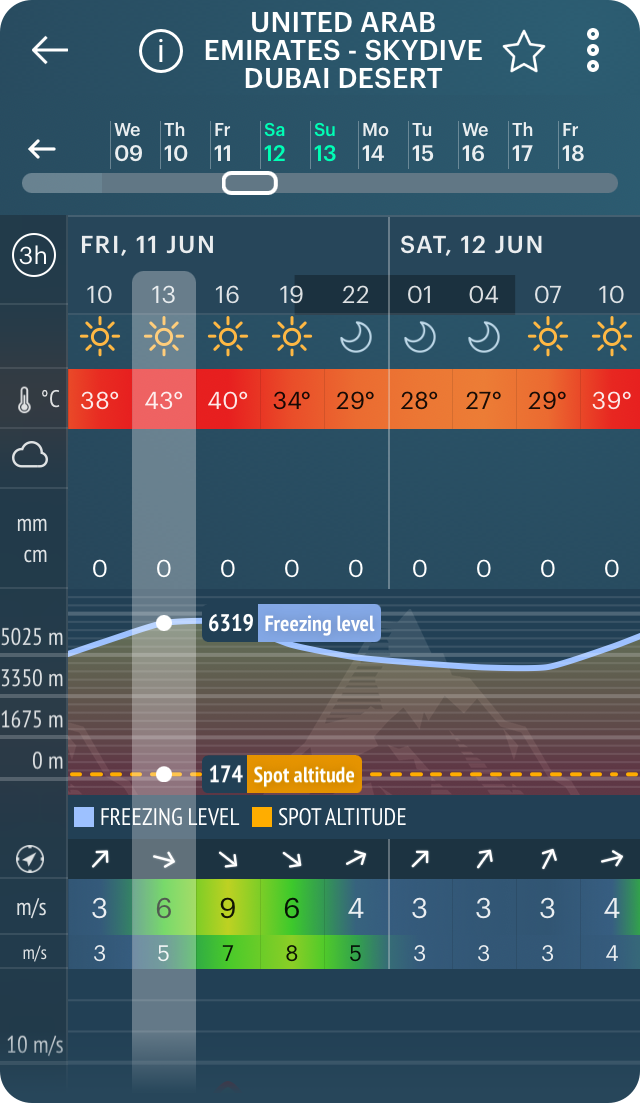 Last remark here: freezing levels may also be available in the form of a weather map for a region or a country. For example, that's how it looks in the National Oceanic and Atmospheric Administration (NOAA) forecasts for the USA.

Where to find freezing level in Windy.app?

In Windy.app, the freezing level is available in the special Snow Weather Profile with a pre-set of 10+ weather parameters needed for all snow sports: alpine and cross-country skiing, snowboarding, snowshoeing and others. To open the profile:

1. Select your favorite spot or the nearest spot (enable the geolocation feature in the app to do this) from the Home screen, or select your city in the app to see the freezing level for it. 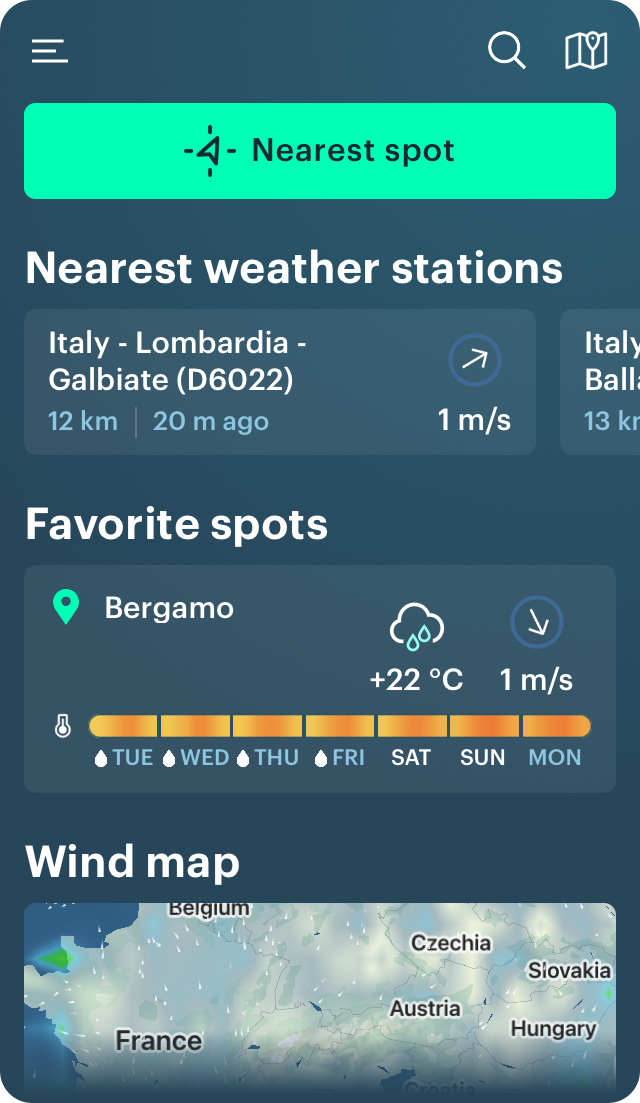 2. Select a profile via the icon to the right of the weather models. In Windy.app the prediction of the freezing level is by the global ICON13 weather model. 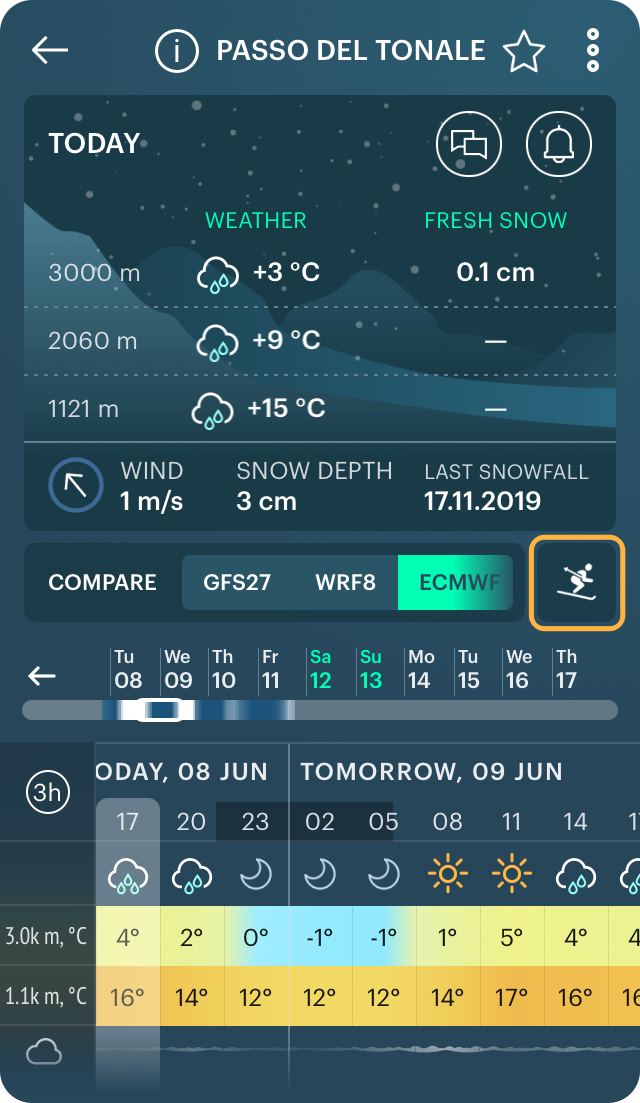 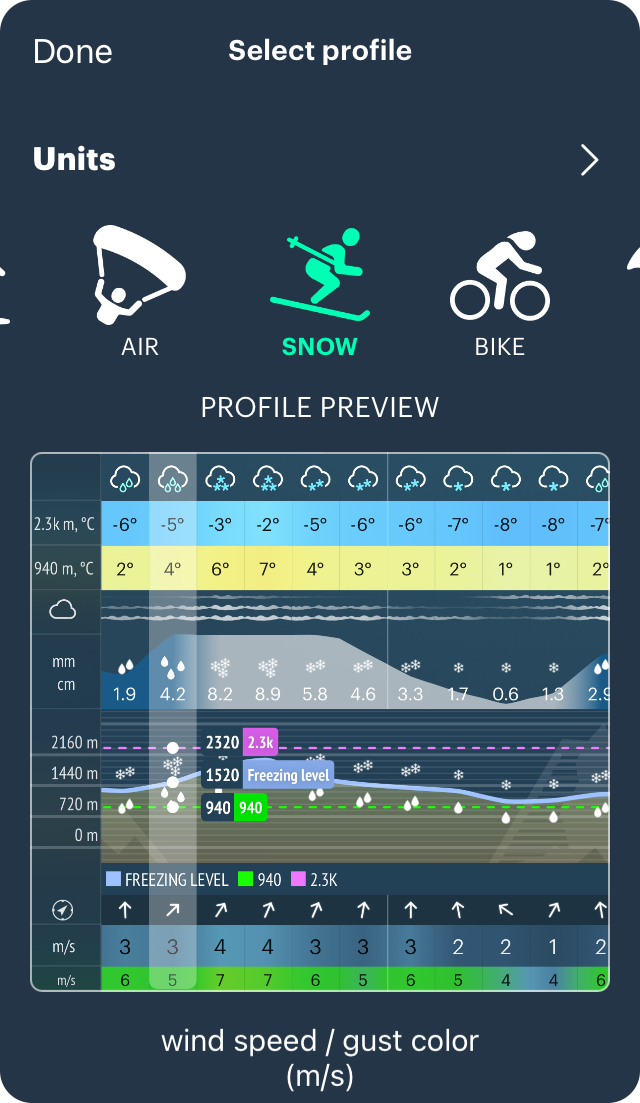 3. Find the freezing level chart in the weather parameters table and get the most accurate forecast. 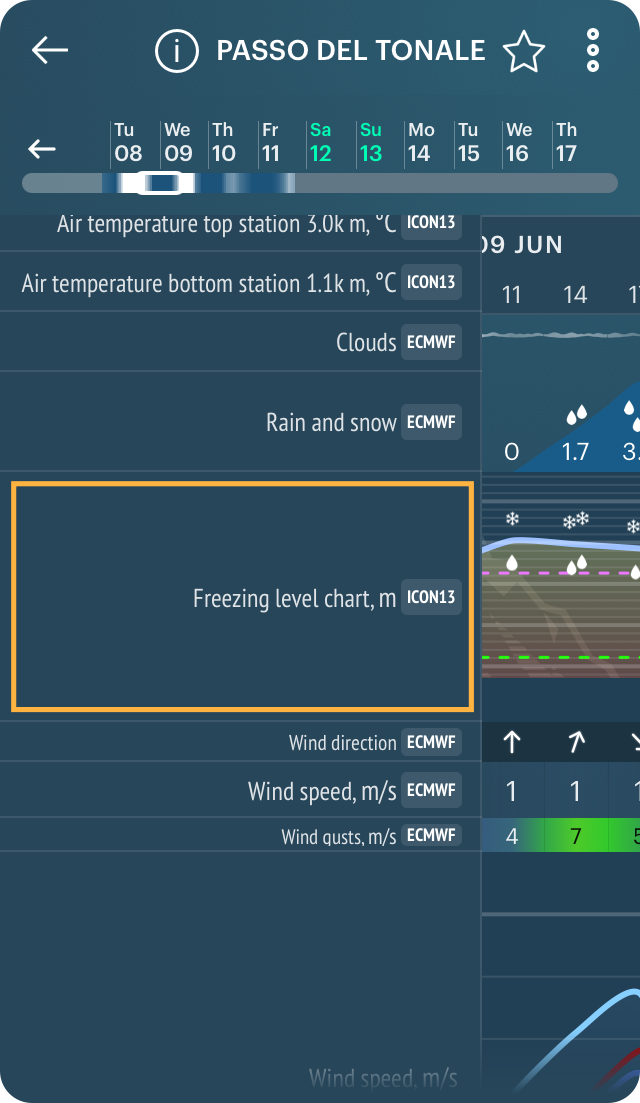 Freezing level chart in the weather parameter in the Windy.app for iOS / Windy.app

* Although the nominal freezing point of water is 0 °C, water in the atmosphere does not always freeze at this temperature and often exists as a "supercooled" liquid.

Text: Ivan Kuznetsov, an outdoor writer from the Dolomites, Italy, and Karelia, Finland. His favorite sports are cycling, hiking, and sauna. Read his other articles.