Cloud top is a well-known weather parameter for outdoors enthusiasts, which do various wind sports in the air — for example, paragliders but not only them. If you haven't tried this or other air sports yet but want to, this article is right for you.

Learn what the cloud top is, why you may need it, and how to use it for your outdoor activity.

What is cloud top?

A cloud is the tiny liquid particles of water vapor, frozen water crystals, and other particles suspended in the air. Clouds form in the sky because the air becomes saturated with moisture when it cools to the dew point, or when much water evaporates from the earth's surface and water vapor forms.

The cloud top is the height at which the upper visible part of the clouds is located as opposed to the cloud base, which is the lower visible part. So it is measured with the same instrument we use to measure the base of the cloud called a “ceilometer” or a type of atmospheric lidar. Its working principle is based on the laser. We also measure cloud top with the same units as cloud base, although sometimes not meters or feet, but hectopascal (hPa) as the corresponding pressure level.

Why do you need to know the top of clouds for sports and outdoor activities? As with cloud base, it is also useful for anyone who practices various wind sports in the air, such as paragliding, parachuting, or, for example, air ballooning and different types of aviation. In all these sports good visibility is a not just an important, but a vital weather parameter.

But you don’t have to be a paraglider to see top of the clouds. Mountaineers and even many hikers often climb above the clouds because they often lie so low that they are below the tops of the mountains. In this situation you are sure to find yourself in clear and cloudless weather without precipitation. Plus, you can take stunning photos like this one: 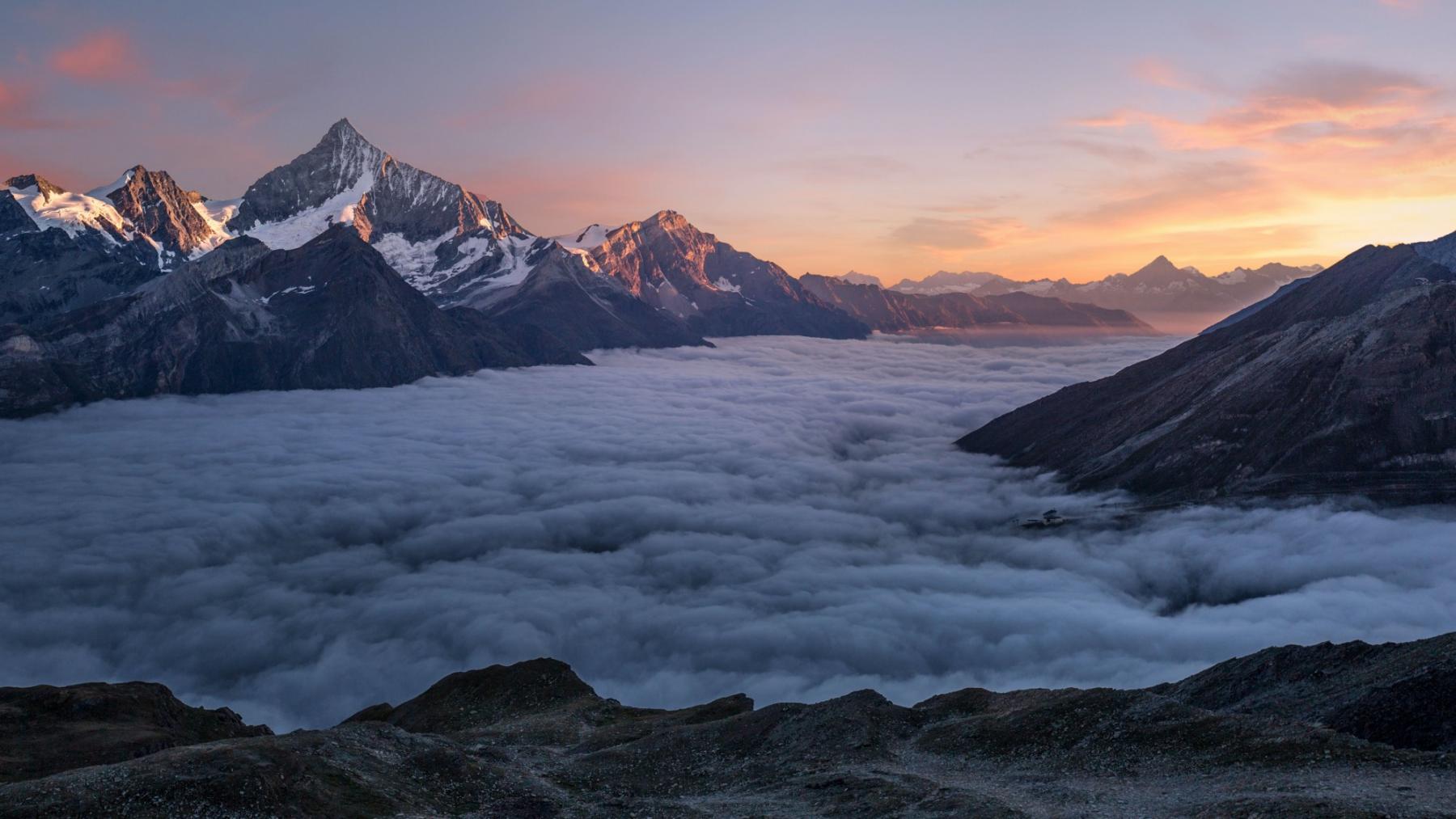 Clouds under the top of the mountains. Photo: Samuel Ferrara / Unsplash

How else do we measure clouds?

Clouds are measured not only by this weather parameter but by several others that are related to it. Here we will mention them briefly, and later we will talk more about each of them in separate articles (take this article as a bookmark):

Where to find clouds forecast in Windy.app?

In Windy.app you can find the cloud base weather parameter in a special weather profile for all wind sports in the air called the same — "Air". To do so:

1. Open your favorite or nearest spot from the Home screen or from the Wind and Precipitation Map. For example, the Monte Avena paragliding spot located in the Dolomites mountains in Veneto region in Italy. It is a fairly flat mountain that is easy to jump from. The height of this mountain is 1,450 m (4,770 ft) above sea level. 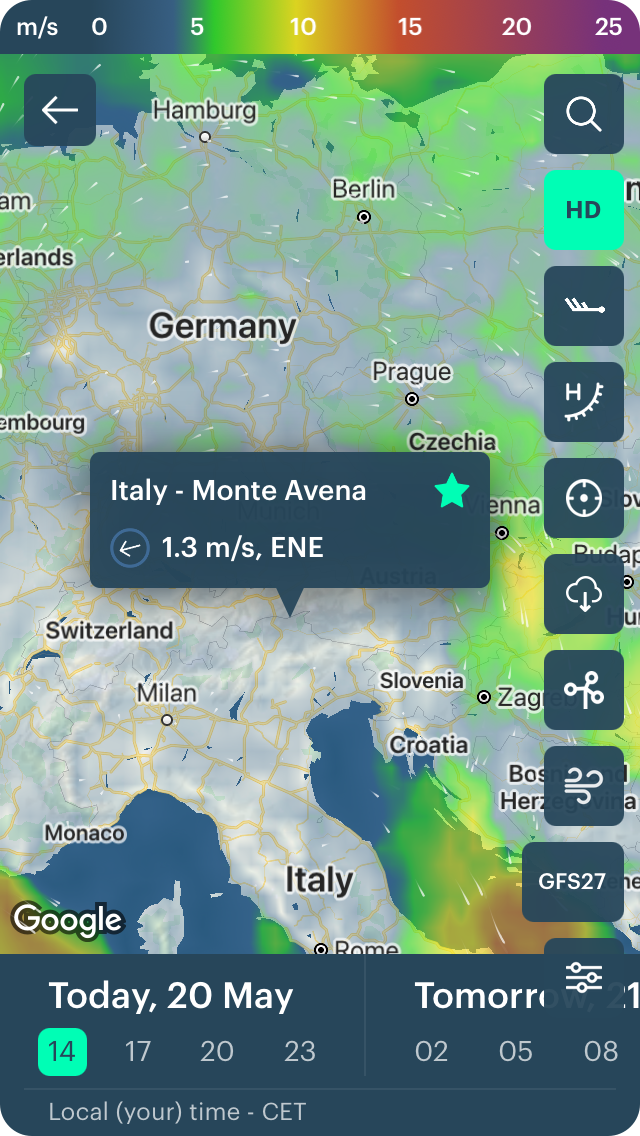 2. Select the Air profile using the icon to the right of the weather models. 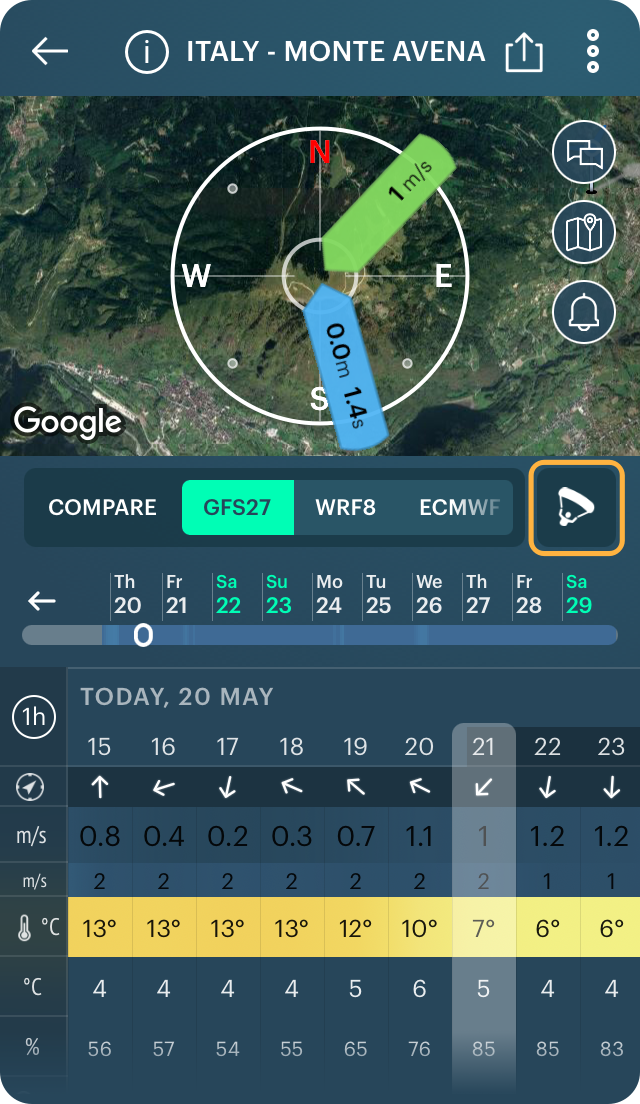 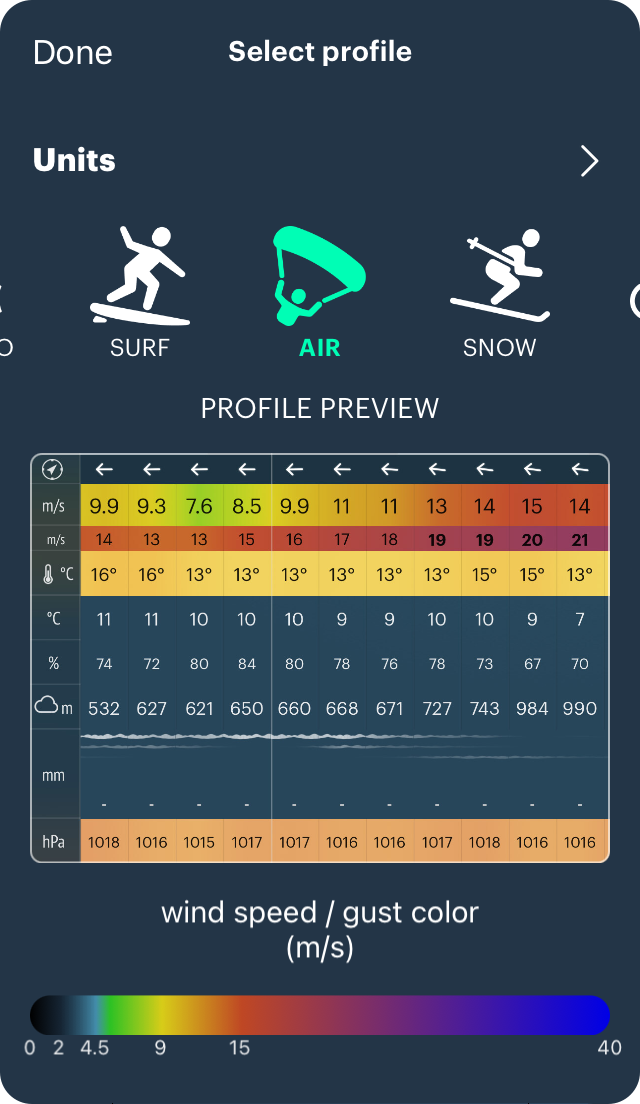 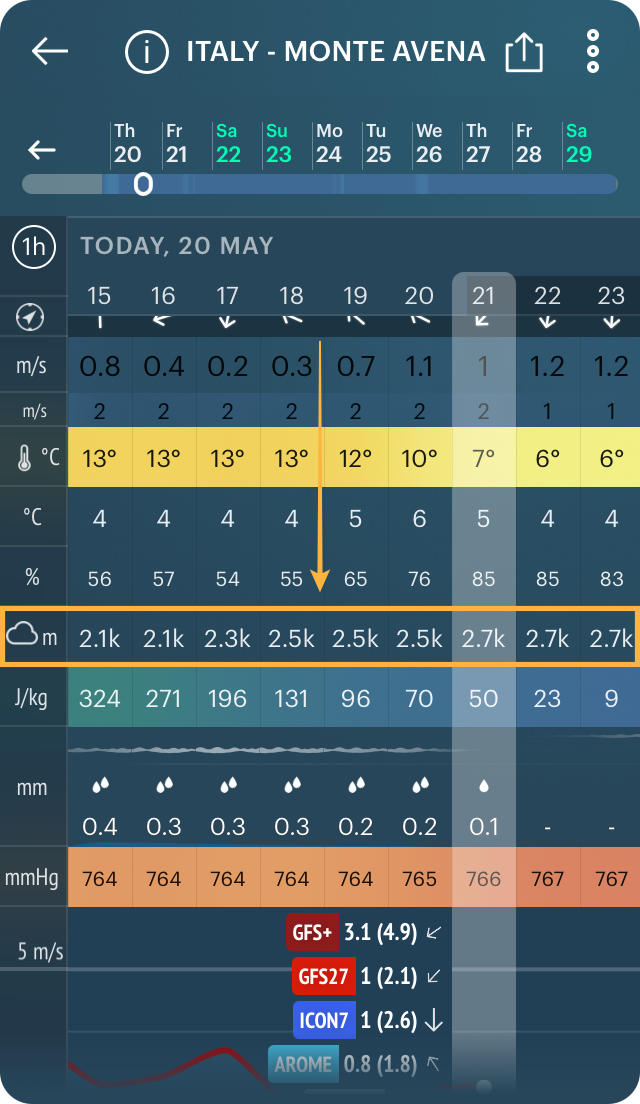 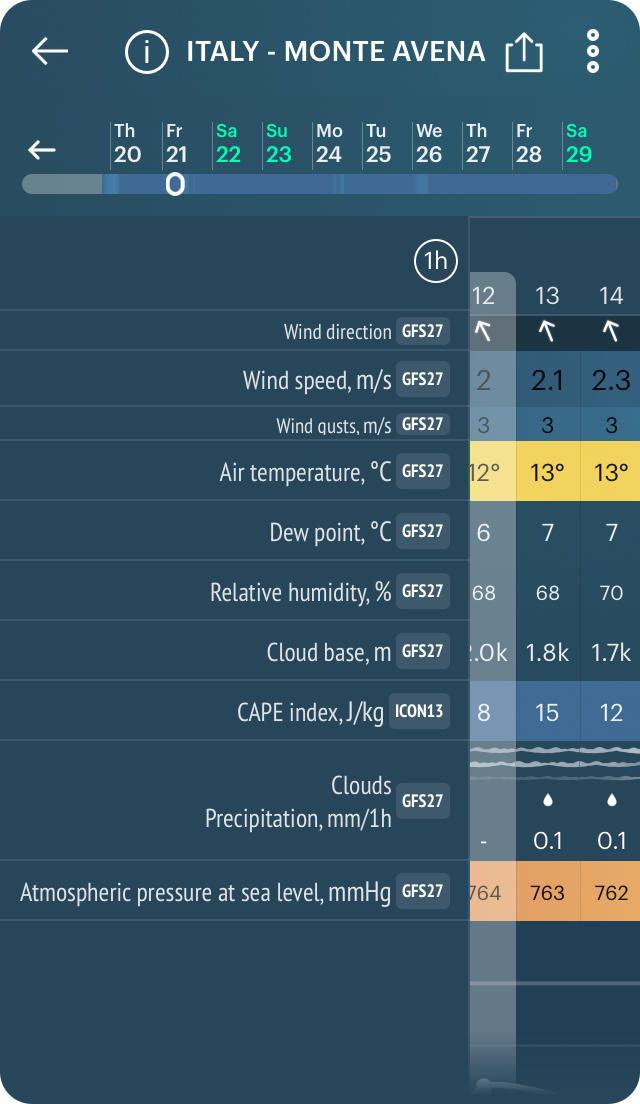 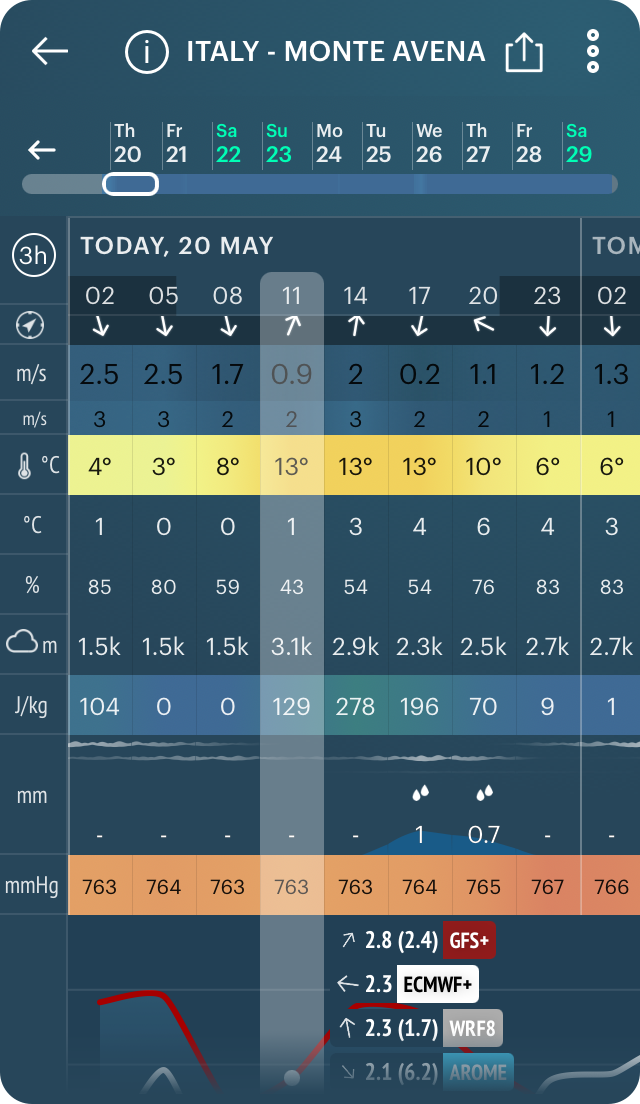 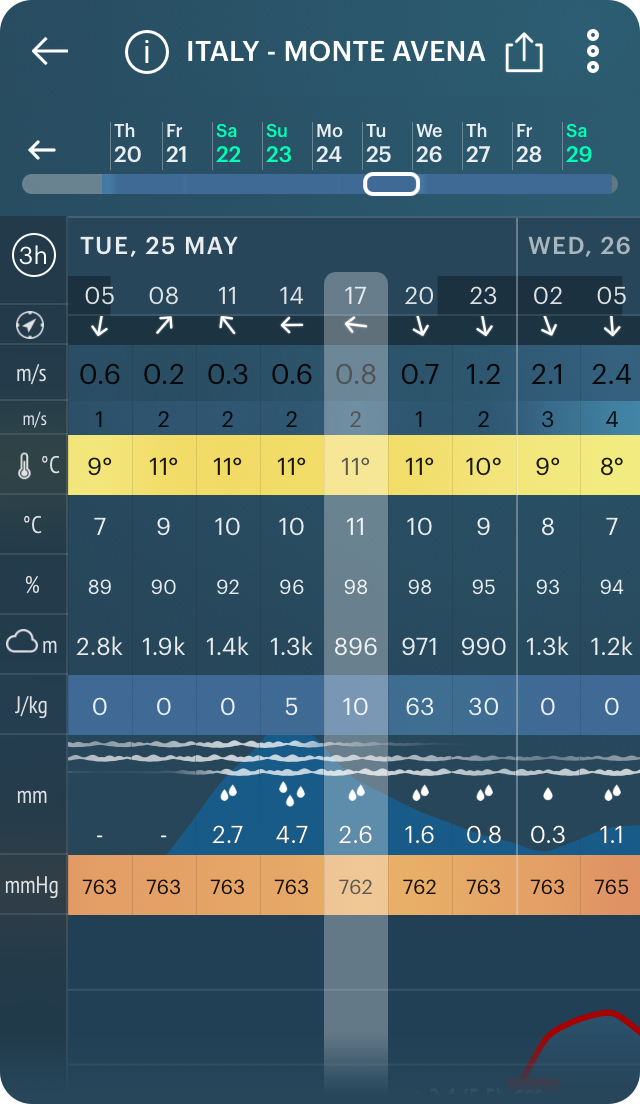 This means that at the minimum cloud base the clouds will cover the highest point of the mountain, so jumping on that day and at that time will be problematic.

Text: Ivan Kuznetsov, an outdoor journalist, editor and writer from the Dolomites, Italy, and Karelia, Finland, with eight years of professional experience. Read his other articles