How to read a weather map like an expert. Wind, precipitation, fronts, and more

The weather maps are maps that tell you about the weather. In general, reading and understanding synoptic maps is easy and fun. However, such a maps are a bit more complicated than regular geographical maps, and a weather forecast you get in a form of tables, graphs and numbers. To read such maps you need some knowledge.

In this big guide and instruction, you will learn how to read the very different types of live weather maps.

What is a weather map definition?

Weather maps are also called synoptic maps or meteorological maps. So what does a weather map show? They show results of weather observations from weather stations, satellites, weather radars, and other data collection tools located all over the world.

World weather maps are needed in order to understand what the weather is now in a particular region of the earth and what weather to expect in the near future.

Wind, temperature, or, for example, the cloud cover in the sky were represented on the paper weather maps by special symbols that were quite difficult or even impossible to understand without special knowledge. So many people asked and still ask "What does this symbol indicate on a weather map?" 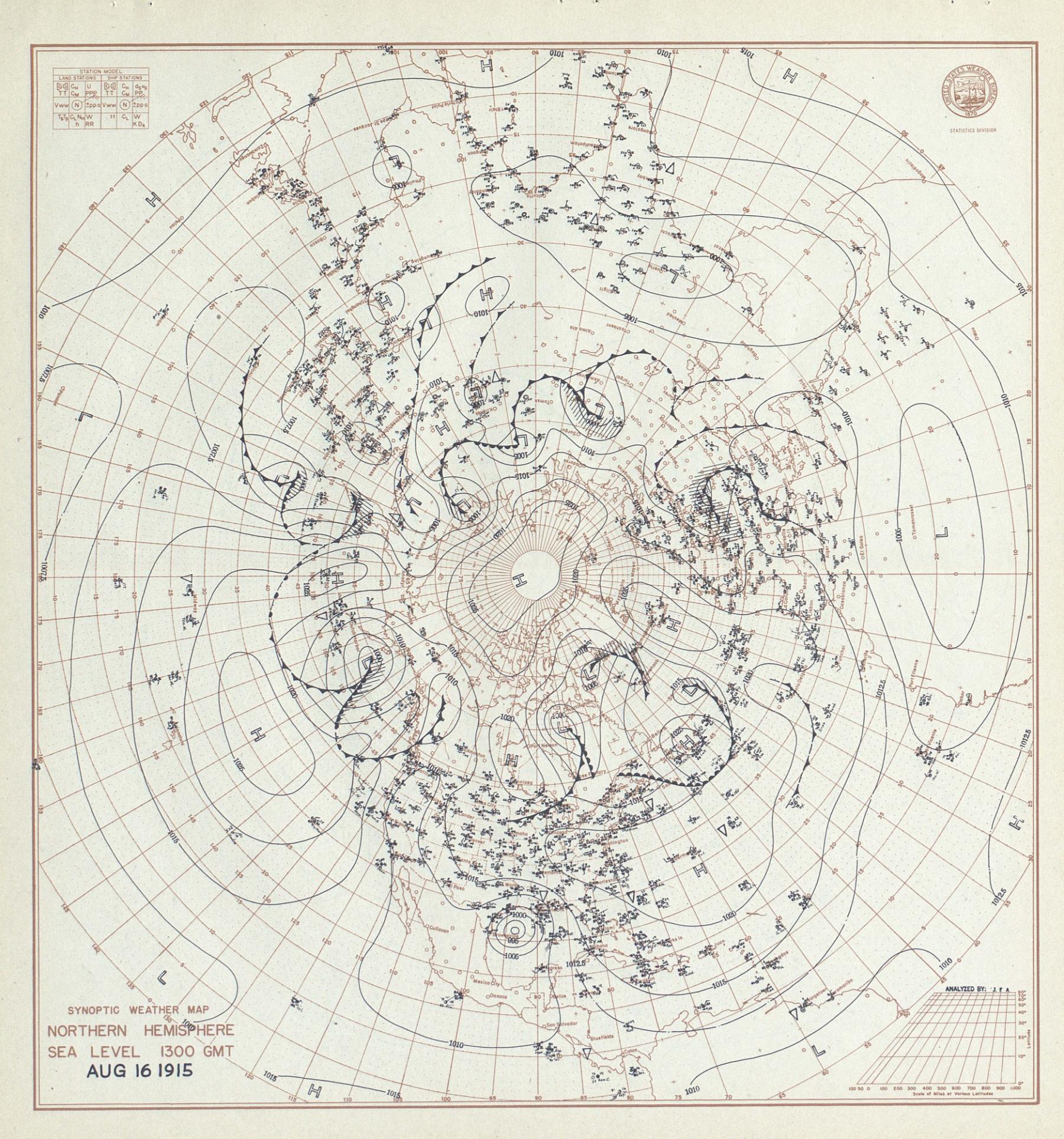 Today, of course, weather maps are digital, just like you have been listening to music in mp3 format for a long time. More: They have become very interactive and live with a lot of visual information. You've definitely seen them on your phone, on websites, or most likely in weather apps by now.

Understanding an interactive live weather map is easier than a paper one. However, it also requires some knowledge.

How to read a weather map like an expert?

To read a map correctly, you need to know a few things:

1. There is no single weather map, there are many, they look different with different information and visualization depending on the source.

2. However, the weather map generally consist of the following basic elements, so keep your attention on them, while reading the map:

3. Weather maps come in different types depending on the information (weather forecast) that they show. They can be wind maps, precipitation maps, temperature maps, and many others.

The map can also have some background — for example, where you can choose a regular or satellite map, or both. There can be more or less information on it. Usually, Google Maps, Apple Maps, OpenStreetMap, and other sources of maps are used as a basis for weather maps.

So, let's figure out how to read many different kinds of weather maps using the Windy.app as an example.

This is an interactive wind map that shows what wind is blowing around the world right now and gives a wind forecast for the next 10 days from one of the several weather models.

On the map you see small white dots that look like waves — this is an example of an interactive element that you can use to roughly understand the wind direction, i.e. where the wind is blowing from. Yes, FROM (not to where) is the direction of the wind. So this is how is wind direction indicated on a weather map.

To understand exactly where the wind is blowing at a particular point on the map, click on an individual outdoor spot or any place on the map. You will see a screen with wind direction and speed.

The map is colored in different colors — from blue (no wind) to purple (hurricane wind). In the Windy.app you can change these colors to any other colors by your choice. The colors show you wind speed or gusts (short-term wind increase up to 20–30 seconds). To see the speed or gusts, switch the map layer in the Settings to "Wind" and "Gusts", respectively.

The wind map also has an Archive or wind history layer. This is the average wind value by month. By choosing it, you can see where the wind is blowing more and faster during the year. It is a very useful feature that you probably won't find in other applications.

Finally about the wind live map, to find out what the wind will be in a particular region or spot, zoom in and zoom out the map. 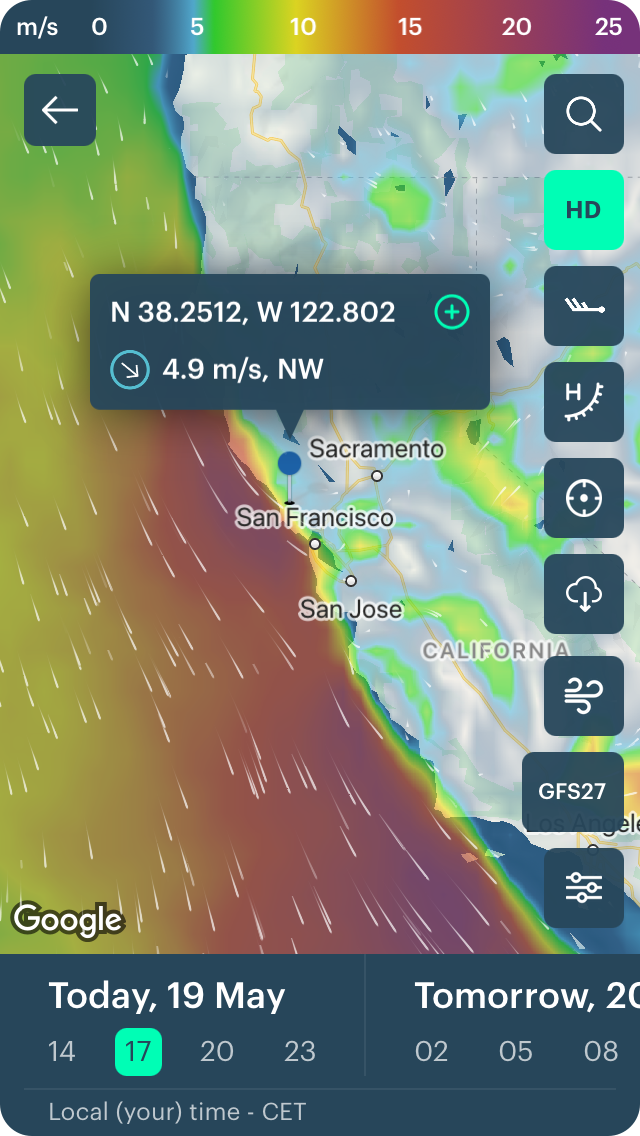 This is a map that shows the way wind used to be depicted on paper weather maps before it became digital. The wind was drawn with the help of special symbols called wind feathers or, the term, which is more commonly used, wind barbs.

Wind bards is still a familiar and understandable format for many who have used them for a long time, such as sailors or marine fishermen. That's why there are wind feathers on the wind map in the Windy.app, too. The wind barbs show the same information — wind direction and speed. 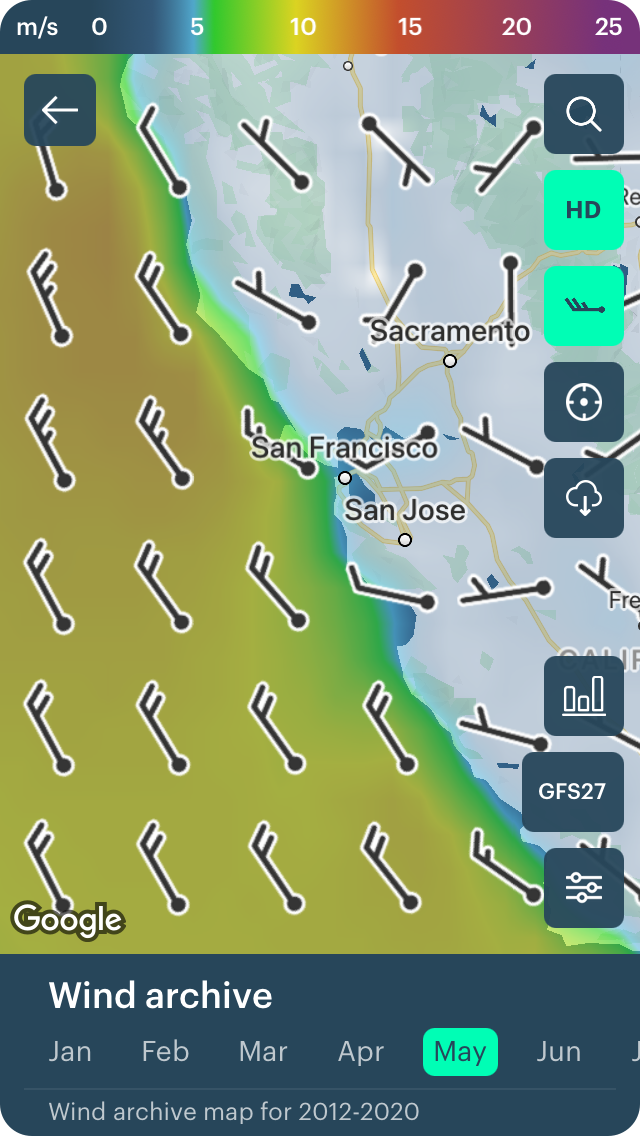 The precipitation map is the same live map as the wind map, only it shows the amount of precipitation (rain and snow) in real-time and gives a forecast.

The map literally shows you where in the world it's raining now or where it will be raining in the same next 10 days. Yes, there are longer precipitation forecasts, but 10 days is a certain limit to the quality of the forecast.

The colors of the precipitation map are about the same, from blue to magenta, but the units are different. Here it is millimeters. You can also change the units to inches to your liking.

Accumulated precipitation is an additional layer that shows the precipitation over a certain period of time in the past and gives a forecast for the same time in the future: 12 hours, 24 hours, three days, five days, and 10 days. I.e. how much it has been or will be raining somewhere. This parameter gives you an overview of precipitation in a particular region and the world in general. 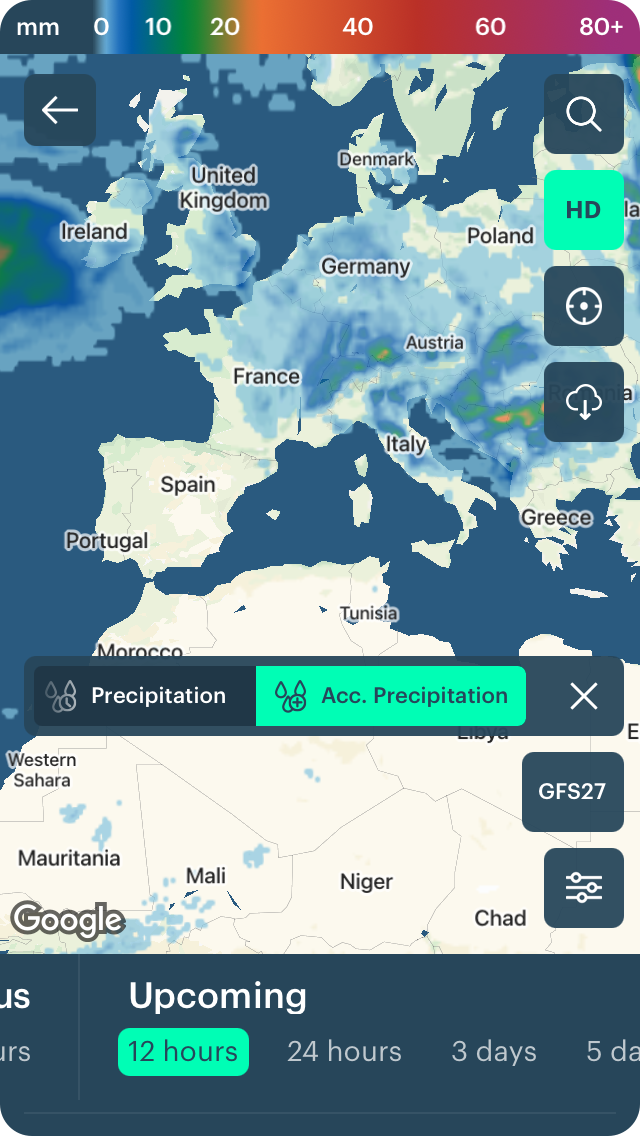 This map shows weather fronts or places where air masses collide in the earth's atmosphere, which differ in temperature, humidity, and other parameters. Clashing fronts means abrupt changes in weather, including extreme weather such as heavy rains, thunderstorms and lightning, mists, and so on...

On the map, there are cold and warm fronts: red arcs are warm fronts. The blue arcs are cold fronts. The red and blue arcs together are stationary fronts, that is, the mix of warm and cold fronts. Purple arcs are occluded fronts, that is, fronts that will appear in the near future — they will become red or blue. The orange lines are low-pressure troughs; they form when isobars make a sharp bend around the lowest-pressure region. 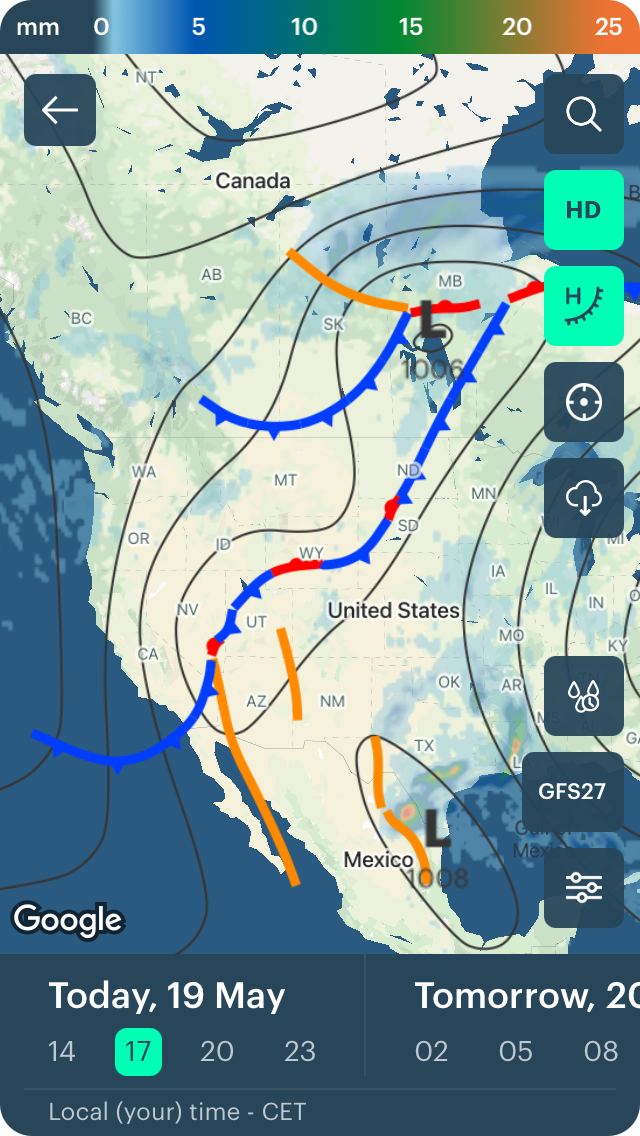 The map with continuous lines that curve at different angles and form rings. These are called isobars.

Isobars are a type of isolines, lines that are used to show areas with the same values on a flat map for different weather and other parameters — wind, temperature (for this used isotherms), and, for example, atmospheric pressure. Isobars show just that. That is, there will be the same pressure along the entire length of the line on the map.

Isobars are needed not only to know the pressure but also to better understand what kind of wind it is now and where it is blowing. For example, lines closer together accurately mean stronger winds than more distant lines. 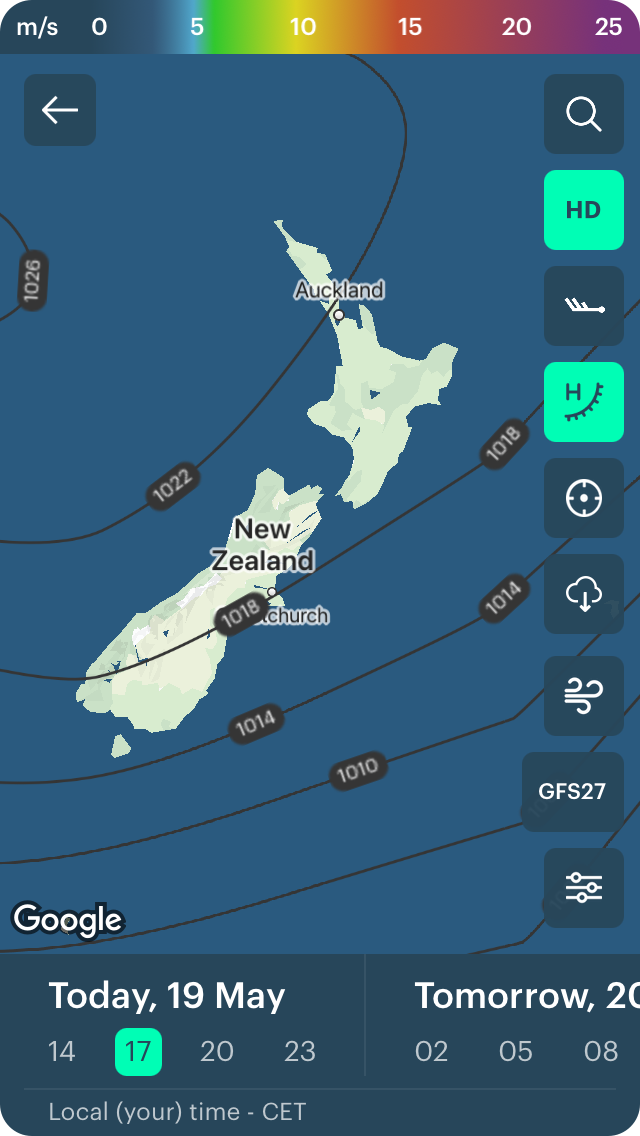 The isobar map also shows areas with different atmospheric pressure. You see the big letters L and H "scattered" around the globe.

Learn more about understanding cyclones and anticyclones in this article. 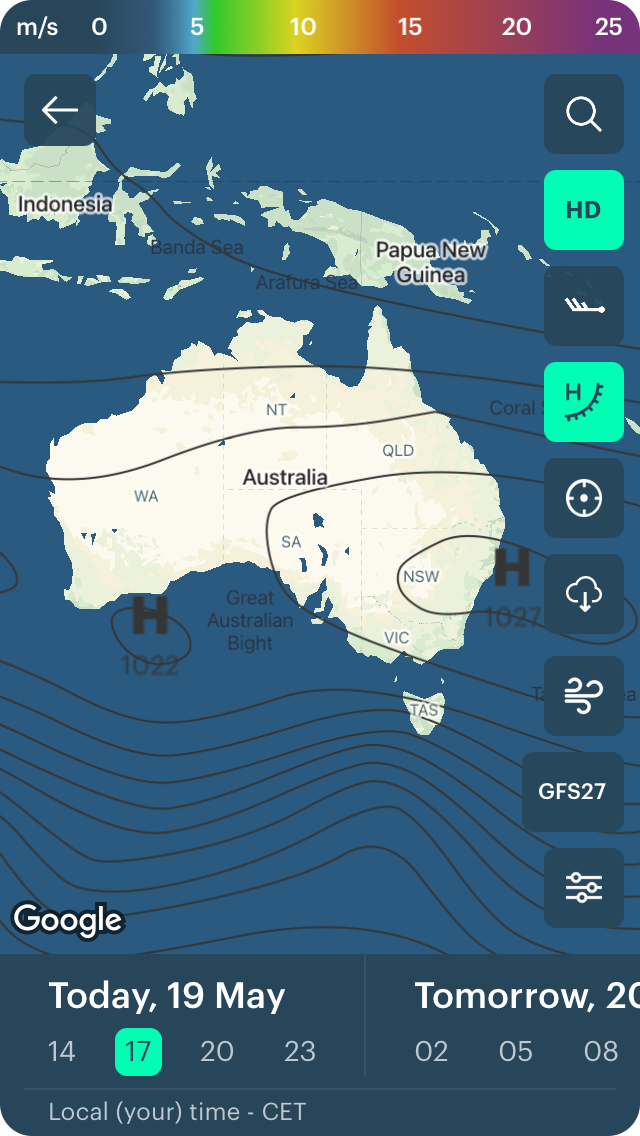 The map shows a swell forecast, major weather, and natural parameter for surfing. It is a series of waves caused by special weather conditions in the ocean, such as a storm. Swell is really very important in surfing: No good swell — no good surf. A swell has several parameters: height, period, and the direction you see on the map.

The white arrows, like the ones we see on the wind map, show the direction of the swell. Look at the sharp end of the arrow to see where the waves are going.

The hurricane map shows in real-time where hurricanes, typhoons, and other types of storms are currently occurring. Each hurricane or typhoon is accompanied by strong gusty winds and heavy rains that can cause serious damage.

To identify an area with a hurricane, open the same Wind and Precipitation map using the "Wind speed", "Wind gusts" and "Precipitation" layers. Areas with maximum wind speeds of 11 and 12 on the Beaufort scale will be lilac and purple, and the areas with heavy precipitation will be dark orange and dark red.

Learn more about hurricanes in a speacil section of this website.

There are two layers on the map — one with icons of weather stations. If you click on an icon, you will see the wind forecast from that station. To get the hourly forecast for the whole day, go to the station screen.

The second layer is the live weather station map. Activate it to immediately see wind information from each specific station. The color of the arrow indicates wind speed and its direction indicates wind direction. 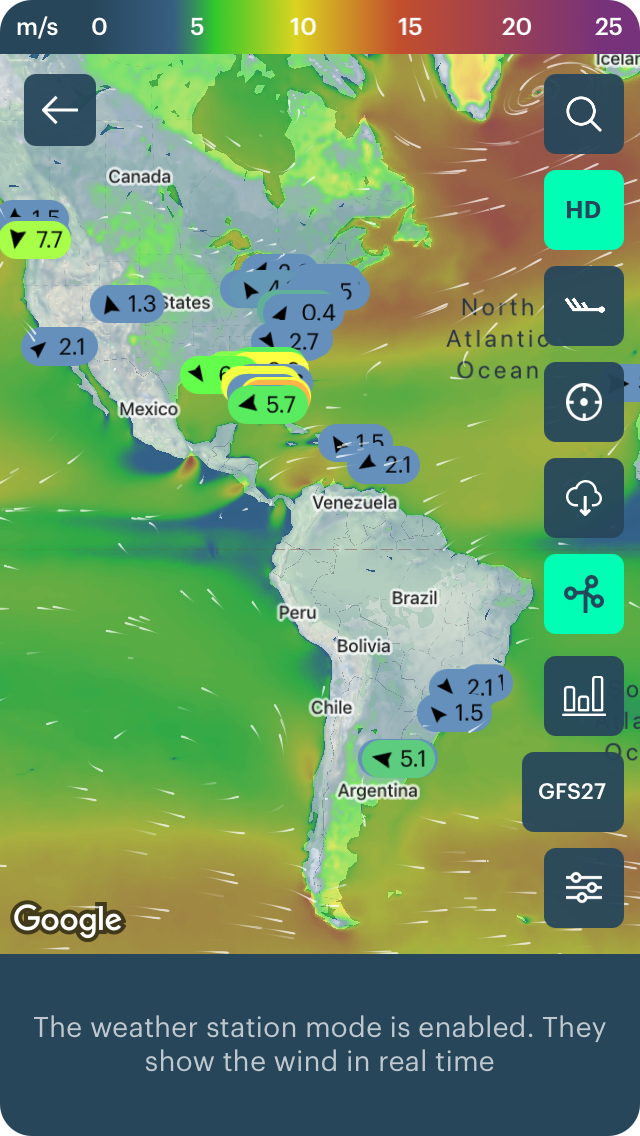 Where to find a weather map in Windy.app?

In Windy.app, the weather map called Wind Map. it is located right on the Home screen of the app. You can also always access the map from any spot screen by clicking on the icon at the top of the screen.

But that's not all the map the Windy.app team making for you:

In our second weather app WindHub, designed especially for sailors, you can find almost all the same maps that you can have in the Windy.app, namely: wind map, swell map, precipitation map, live weather station map, and others. 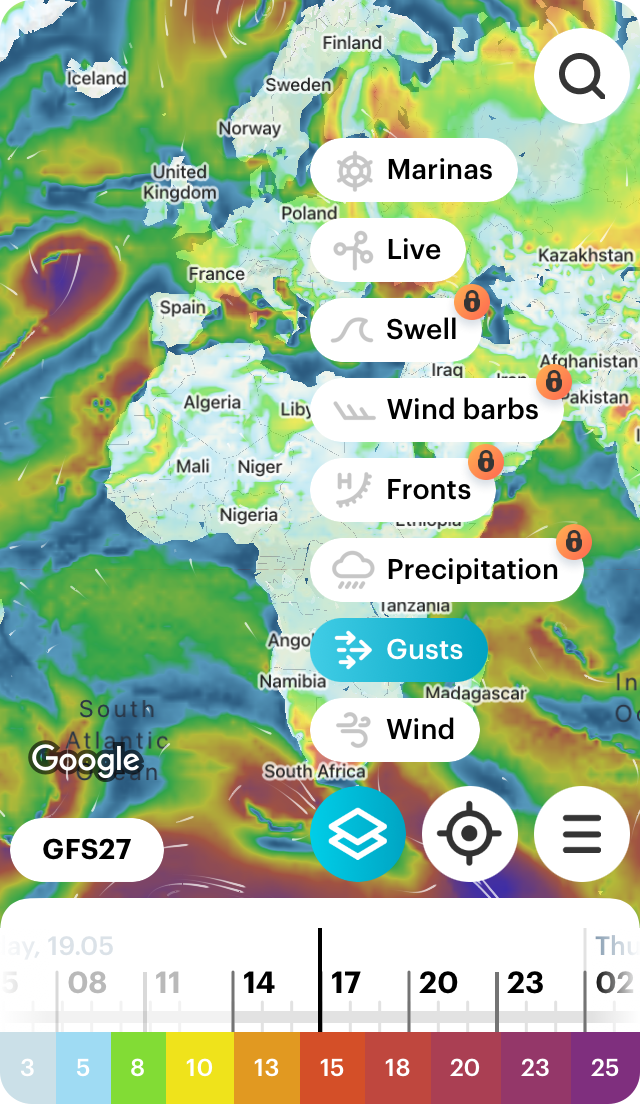 The temperature map shows the current air temperature in different parts of the world and gives a temperature forecast for the next 10 days.

This map is similar to the wind map or precipitation map in the Windy.app and WindHub, but the colors are slightly different — from purple (minus temperatures) to magenta — over +50 Celsius (+122 Fahrenheit). You can also change the units of measurement depending on your region.

For example, at the time of writing this guide, the hottest place on the planet is in North Africa as well as Russia and California. 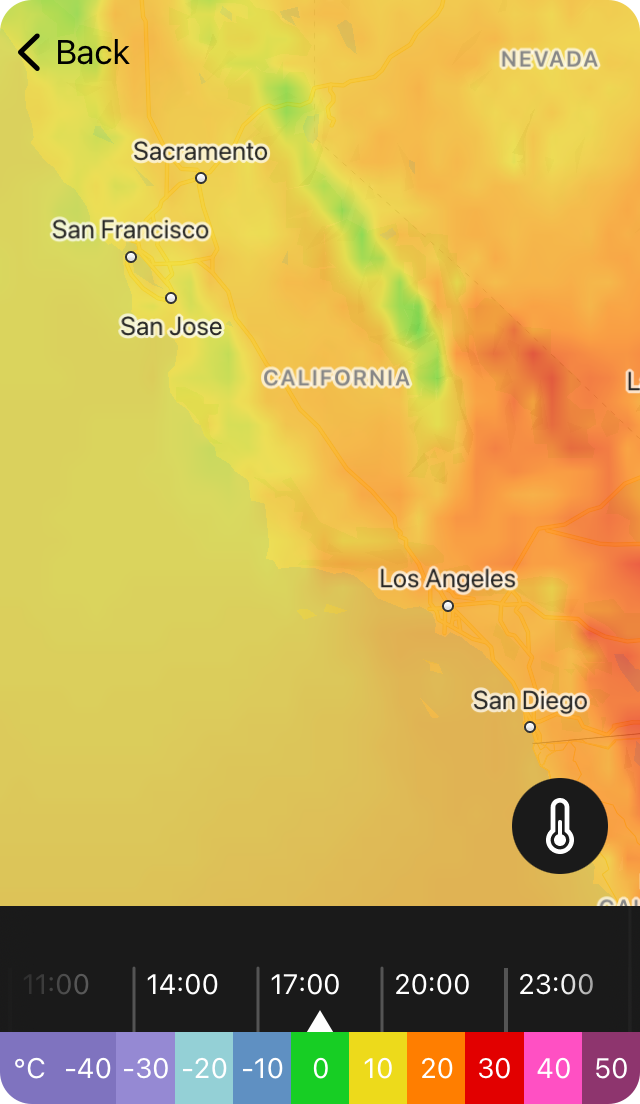 This is another useful map in the MeMeteo app that shows precipitation to 10 minutes accuracy, i.e. in very real-time. The map shows you exactly when rain or snow will start, how long it will last, and when it will end in time.

Precipitation on the map is marked with a bit different (or rather to say limited amount) of colors as on the regular precipitation map in MeMeteo. At the bottom of the screen, there is a scale, which reflects what color indicates: light blue — light precipitation, blue —  moderate precipitation, dark blue — heavy precipitation.

Text: Ivan Kuznetsov, an outdoor journalist, editor and writer from the Dolomites, Italy, and Karelia, Finland, with eight years of professional experience. Read his other articles.