Think of this post as your Bachelor in Understanding The Surf Forecast degree — for example, at the University of California, Los Angeles (UCLA). You will learn the basics of reading surf forecast in a right way to have the best surfing experience.

What is surf forecast?

The surf forecast is the same weather forecast as for any other sports or outdoor activity. What sets it apart from the snow forecast is, understandably, its own set of weather parameters. In the case of surfing, these are the three most important things to know and understand: swell, wind direction and wind gusts, and tides. Let's deal with everything in order:

Waves are always the result of mechanical action — for example, the impact of the wind or a boat.

If we don’t feel the wind but see the waves, it doesn’t mean that they are formed on their own, but most likely are the result of the storm, raging somewhere far from here. If you put your finger into the water, you will create circles, waves. This happens because we acted on the water mechanically. Wind affects water in the same way — mechanically.

Waves are formed because of the blowing wind, and then they roll over the entire surface. That is why we can see waves in a completely calm places. The set of unrest on the surface of the water formed by the “far away” wind is called a swell.

So swell is a collection of waves generated by specific conditions like a storm. Swell can travel a long way to the beach (think like 2000 miles offshore). The swell height, period, direction are the ones that determine how surfable is the swell.

For your Surfing Degree, these four variables are the basics: swell, swell size (or swell height), swell period and swell direction. Understand this holy foursome and you will have a decent package of know-how and you are ready to start planning your next surf session. 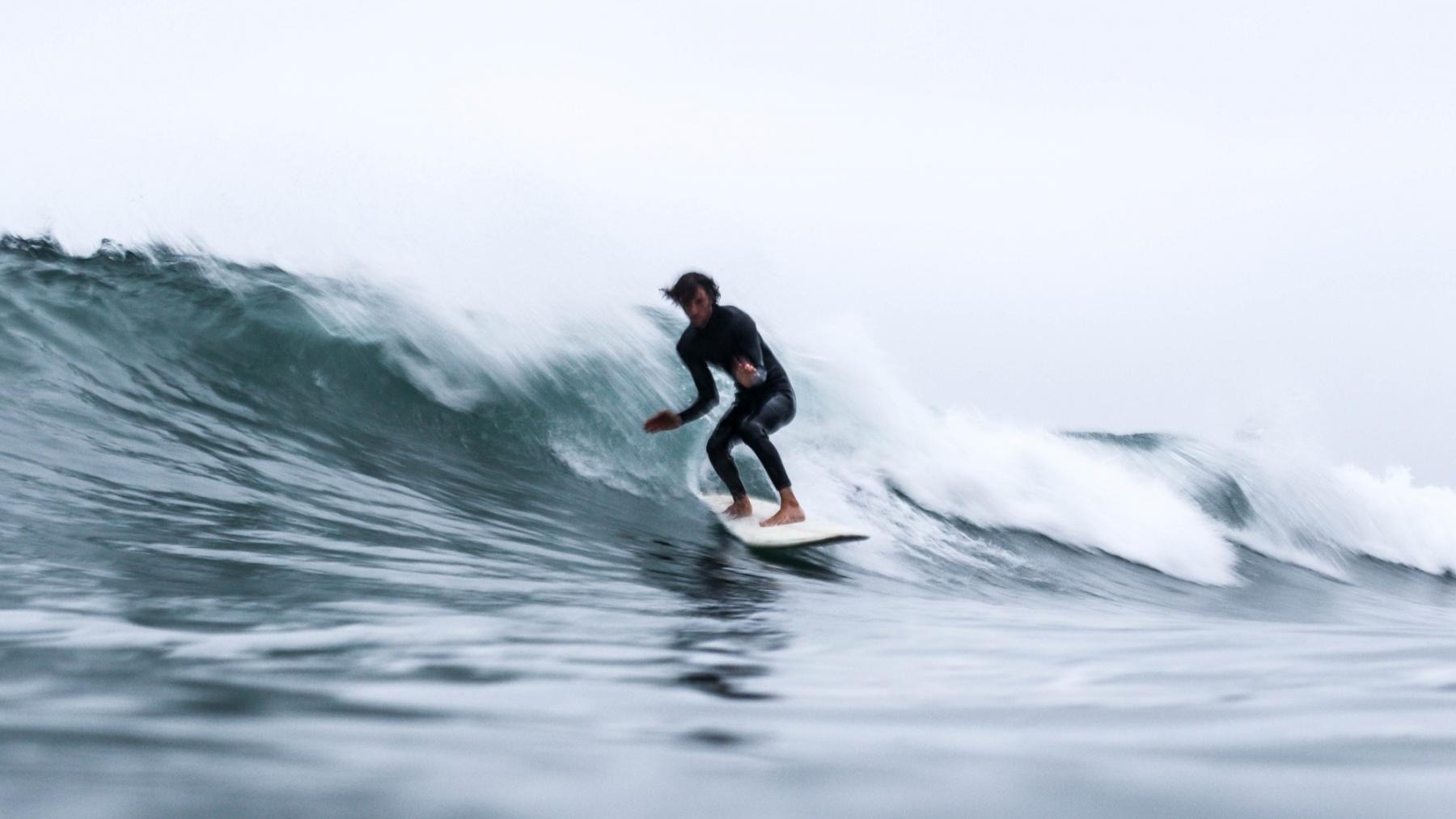 Surfing just made its debut at the 2021 Summer Olympics Games in Tokyo, Japan as a new olympic sport. Photo: Jeremy-bishop / Unsplash

The quality of the waves depends on the wind direction on the coast. If the wind blows from the shore towards the water — this is an offshore. Such a wind maintains waves from collapse and makes them sharper.

There are two main types of tides:

The low and high tides are really depends on the spot and you should always ask the locals about the best timing to get out in the water. Most often it’s when the tide is moving either “low going high” or the tide is on the rise. Usually, at low tide reefs and stones are exposed.

How to read surf forecast in Windy.app?

The surf forecast is avaliable in two places in the app: on the Sweel Map in the Weather Map and in the Spot Screen.

Swell Map in the Weather Map

2. Zoom the map to the region you want to get a forecast for. It could be your favorite spot or the closest one to your current location.

The white triangles on the map shows the waves and its direction, which is FROM where the waves are coming. For example, for the popular Carmel Beach surf spot in Monterey, California, USA, the direction of the swell is west-southwest (WSW) on the screen right next. So reading swell direction is the same as reading wind direction. 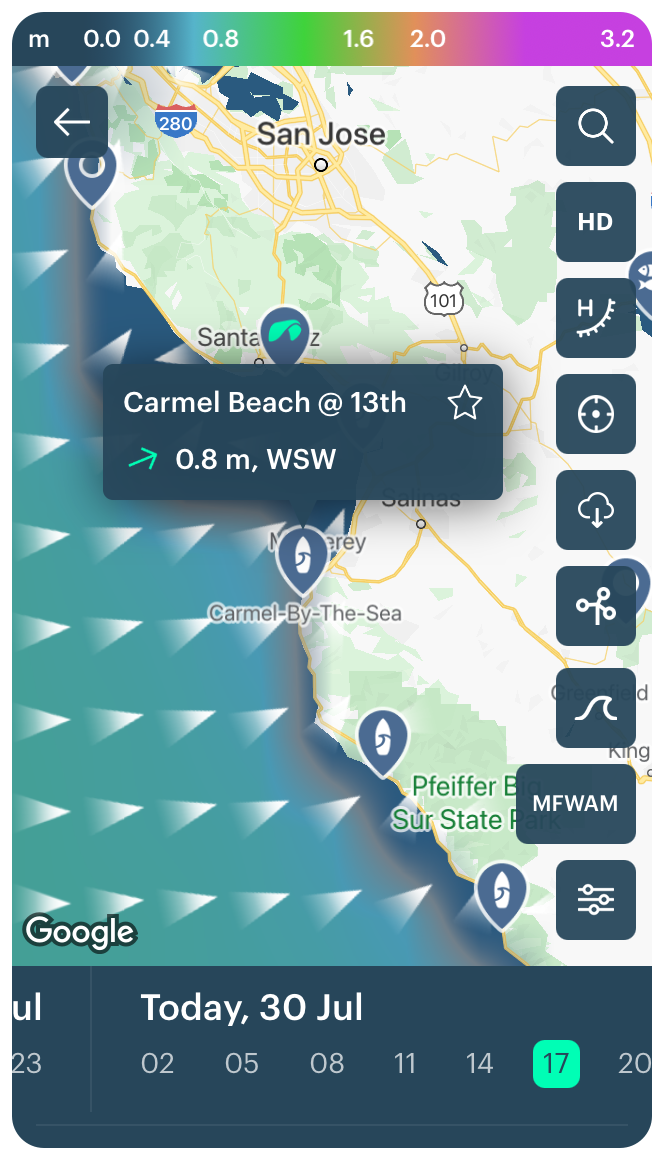 Swell Map in the Windy.app for iOS 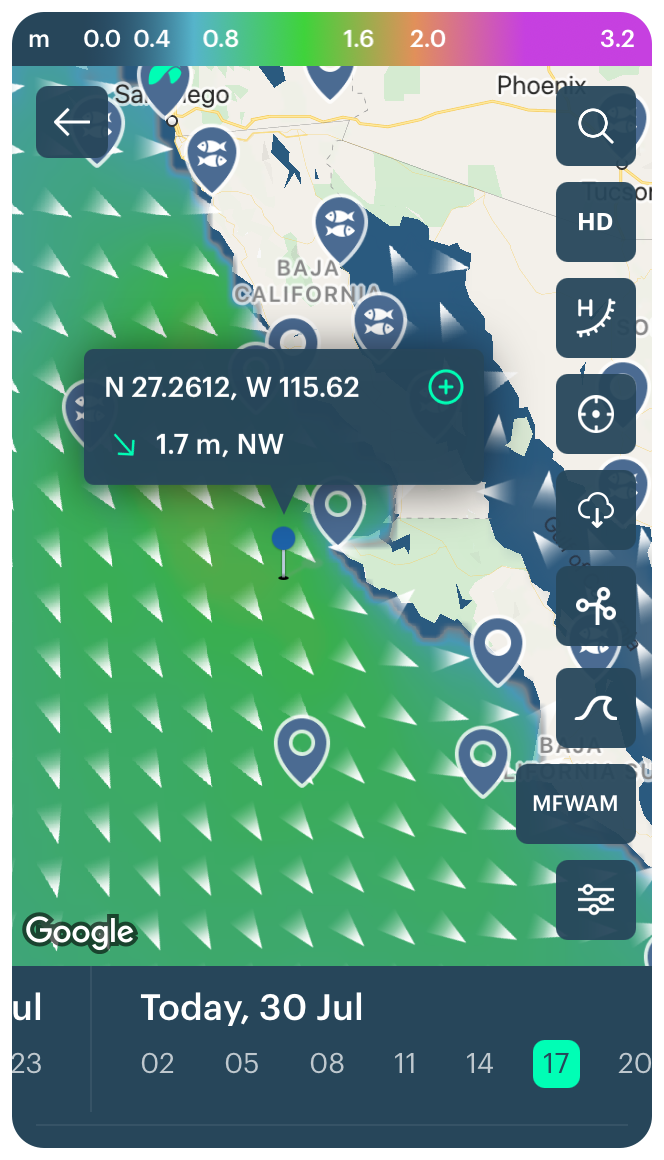 Swell Map in the Windy.app for iOS

4. If you still need to find a spot for surfing, open the Weather Map's Extra Setting to find the surf spots closest to you faster by hiding all other types of spots. 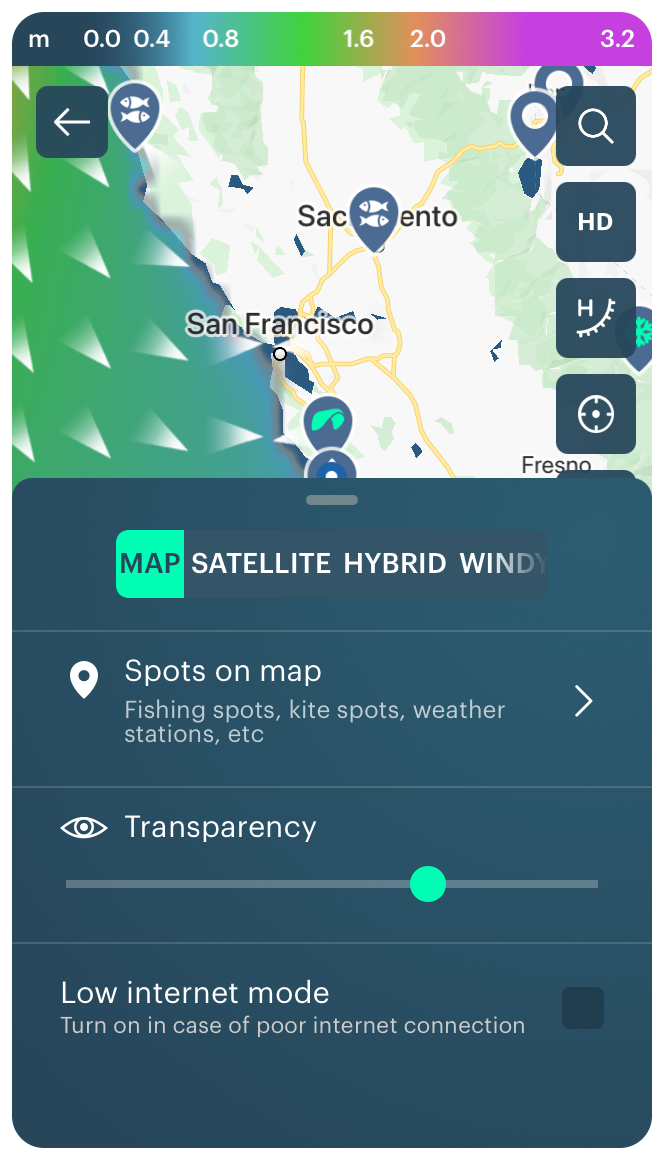 Swell Map Extra Settings in the Windy.app for iOS

5. Go to the spot screen clicking on it to get the most detailed forecast, including swell's other basic parameters, besides the direction. As a general rule: 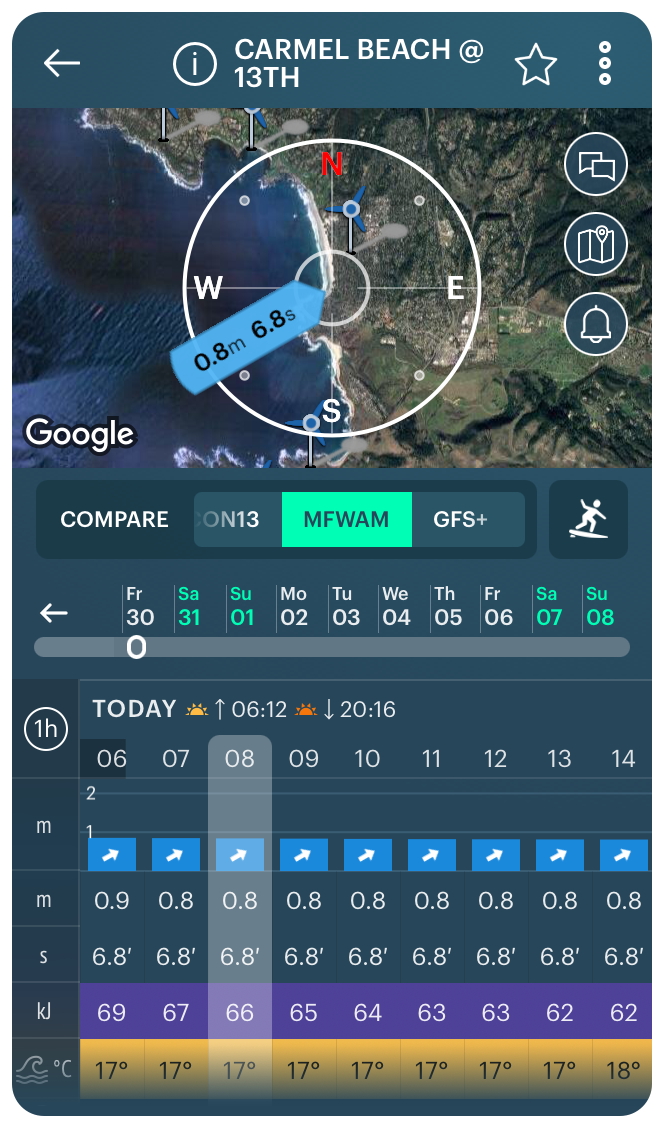 Swell forecast (wave forecast) in the Windy.app for iOS 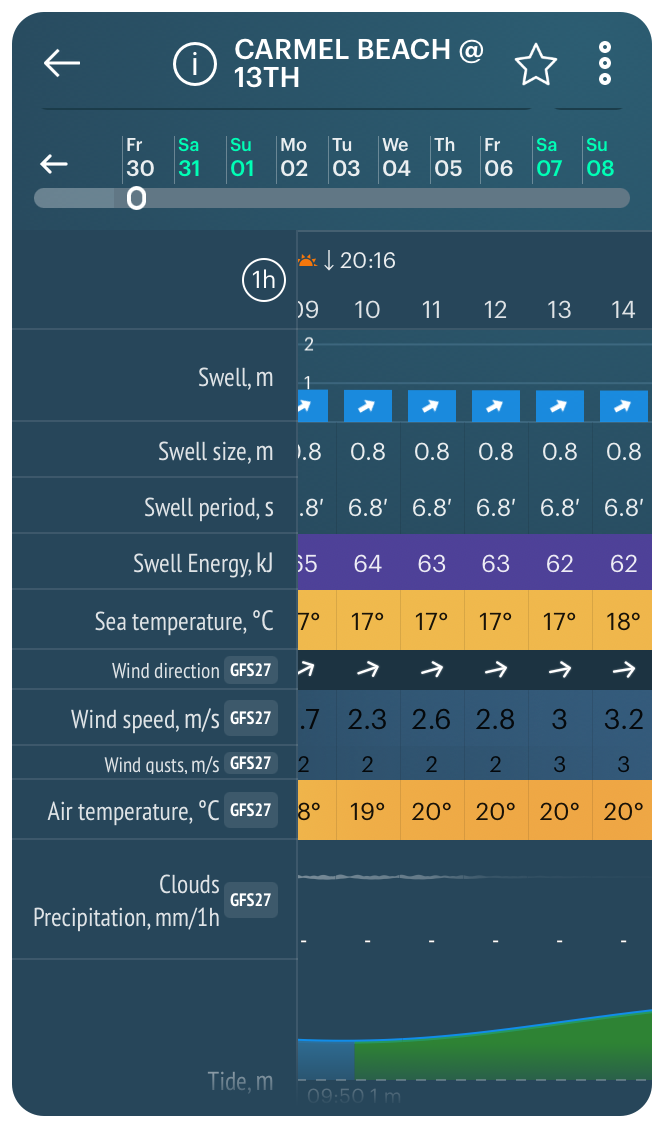 Swell forecast (wave forecast) in the Windy.app for iOS

The modern weather forecast is scientifically as accurate as possible but as anyone who has been in the water and witnessed the ever-changing nature of Mother Nature (sometimes you can go in an hour from great surf into abysmal) – make sure you have this covered:

Where to find surf forecast in Windy.app?

Windy.app provides surf forecasts for surf spots all over the world. To see it, open any spot in our app and tap on Surf Weather Profile next to the.

Open the Weather Map from the Home screen of the app. Then select "Swell" in the weather parameters slide under the wind icon. At the same time, the map's weather model will change to MFWAM. 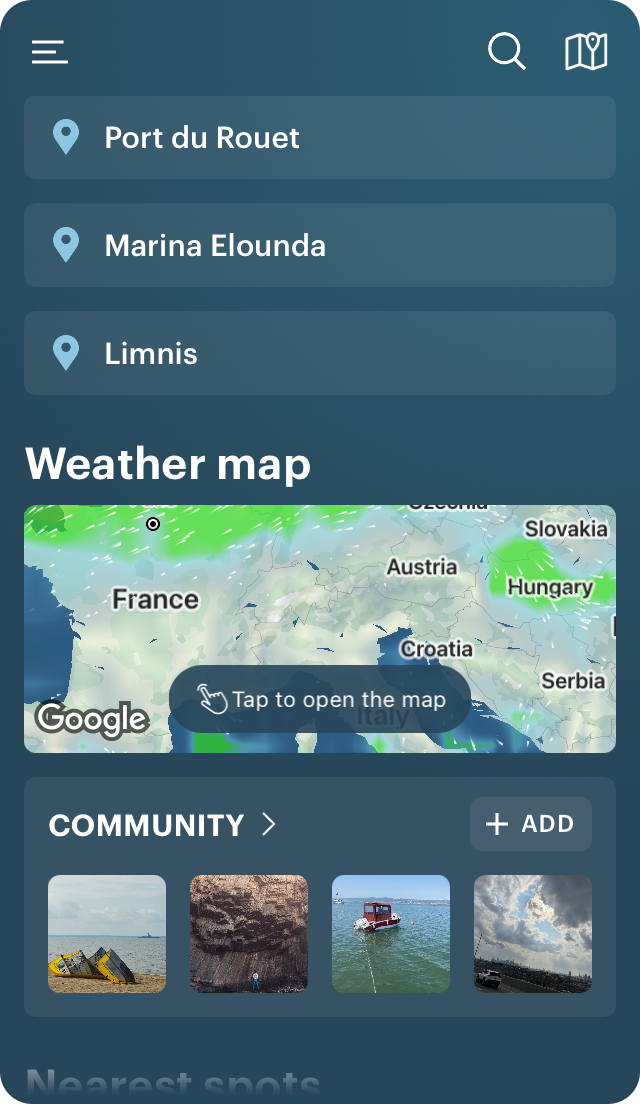 Home Screen of the Windy.app for iOS

Text: Windy.app team and Ivan Kuznetsov, an outdoor journalist, editor and writer from the Dolomites, Italy, and Karelia, Finland, with 10 years of professional experience. His favorite sports are hiking, cycling and sauna. Read his other articles

How to choose the right wetsuit

Guide on surf schools for beginners, intermediate and pro sportsman