If the wind is the movement of air, this movement always has some direction. The question is: where exactly the air is moving in man-made coordinate systems.

In particular, it is important for different sports and outdoor activities, where the wind determines how your active recreation will go. For example, in kite- and windsurfing there is a "working wind direction" for the best wind on the spot.

Let's understand what is the direction of the wind and how to read it in this article.

What is the wind direction definition?

The first and the most important thing to remember: wind direction is always determined by where the wind is blowing FROM, not where it is blowing towards.

The directions of the wind is determined at the geographical system of coordinates invented by man back in the day. It is also called "cardinal directions" or "cardinal points" and similar.

The wind rose is a graph that shows the prevailing wind direction and wind speed at some particular location according to statistics from many years of meteorological observations (also knows as weather history). So the concept of wind rose is used often precisely in meteorology.

Another word that says the same thing is "compass," a device for determining cardinal directions you know probably from your Scout days. 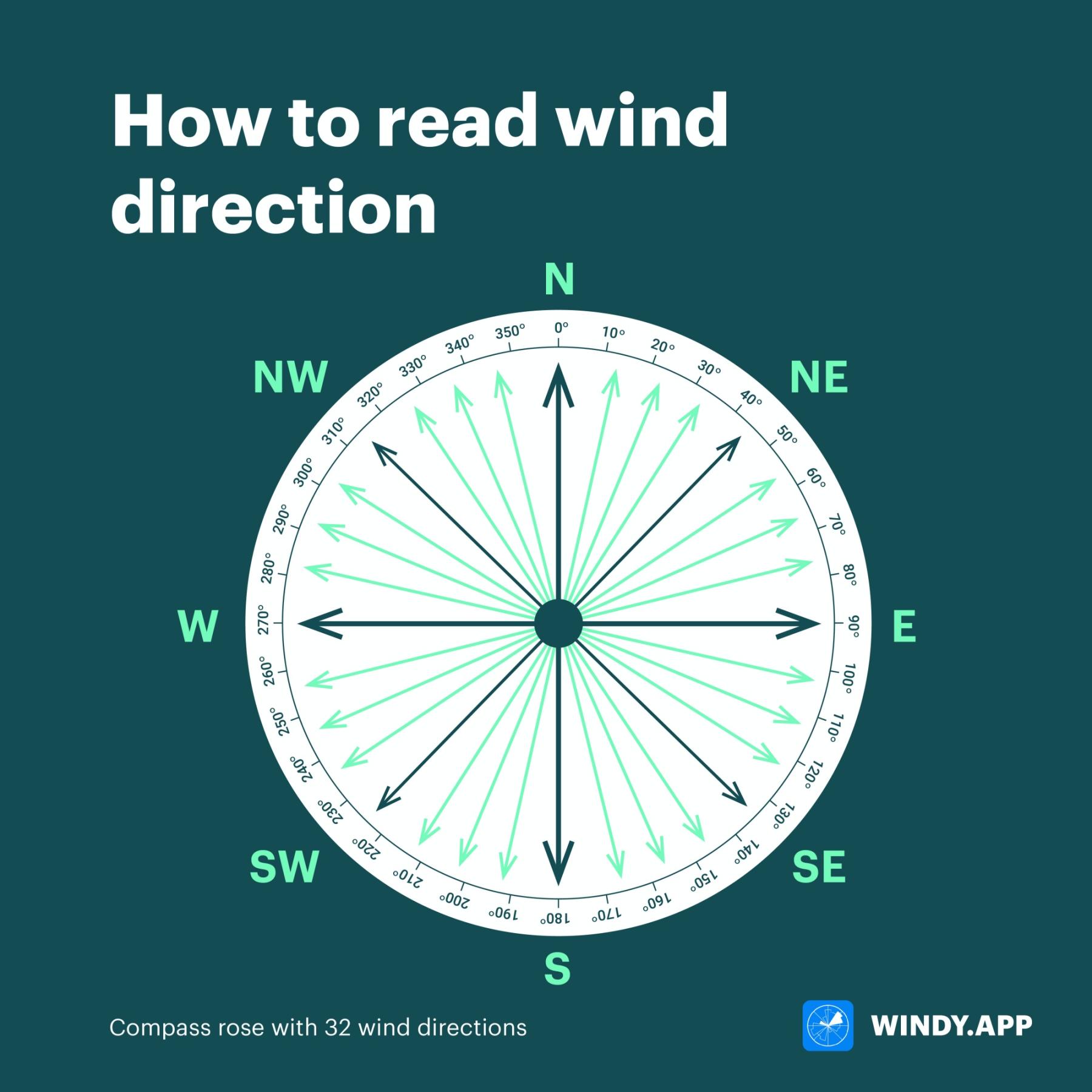 How to read wind direction?

In a geographic coordinate system, the wind has a total of 32 different directions, but not all of them are used in everyday life. Let's take a closer look at all of them:

In the beginning, there are just four main wind directions: north, south, east, and west. Most often, on compass, to shorten the place, they are designated by the letters: N, S, E, and W.

North and south are the Earth's north and south poles, respectively. East and west are the visible sunrise and sunset over the horizon.

Another interesting fact: On modern maps, north is at the top, south at the bottom, east on the right, and west on the left. But on older maps, the south may have been at the top. Wow.

These four directions are called cardinal directions or principal winds.

The directions are further divided into four more: northeast (NE), southeast (NW), southwest (SW), and northwest (NW). So we have now 8 main directions.

These are called secondary intercardinal directions or quarter-winds. 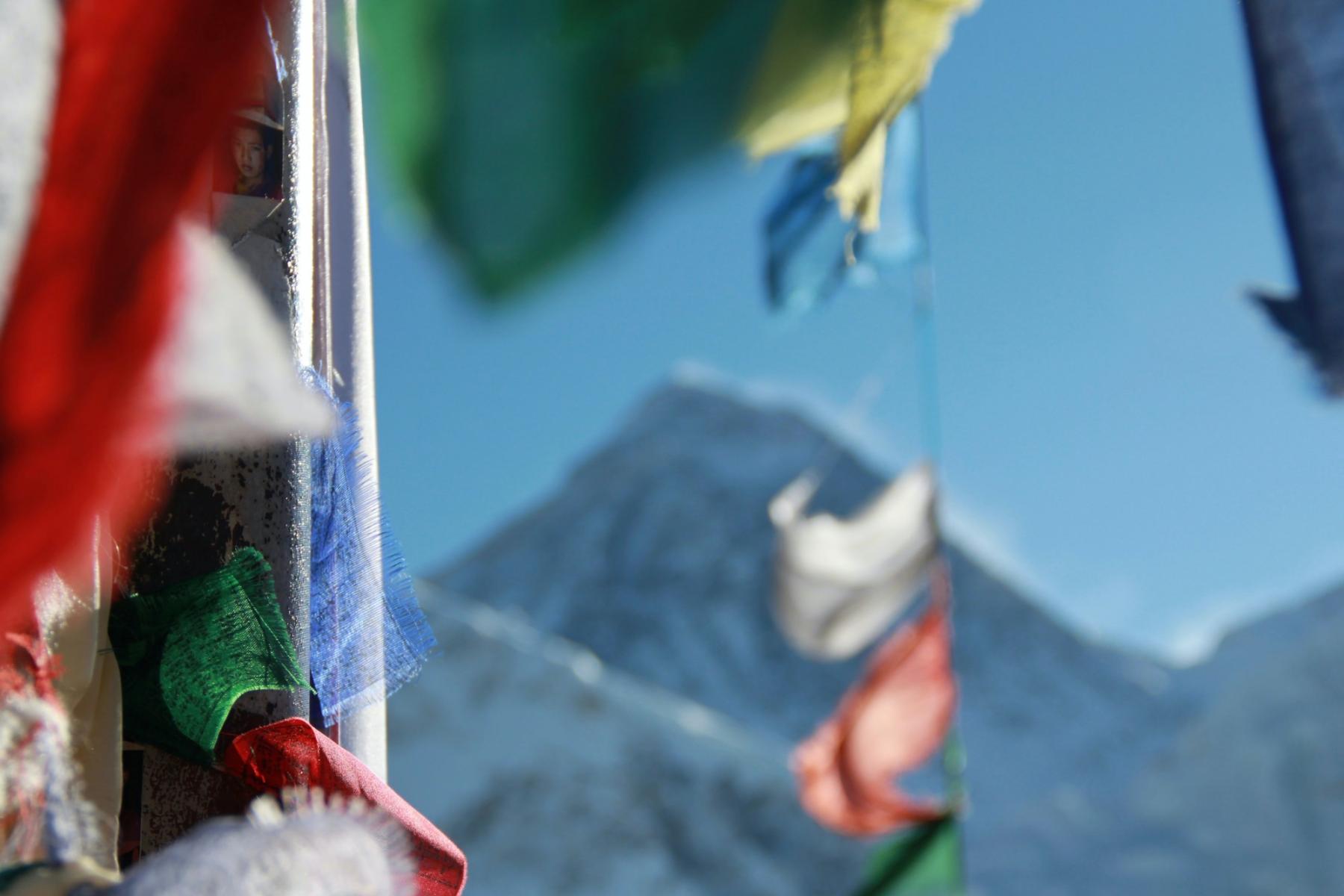 Finally, the 16 main directions make 32-direction-compass together with 16 additional points: north by east (NbE), northeast by north (NEbN), and so on. But a compass with 16 directions is already considered very accurate... and simpler. It is used most often in a daily life.

So why do we need 32? Because the wind direction is also measured in degrees (°) from 0° to 360°, where 0° is north, and where 32 directions correspond perfectly with the divisions in degrees. Then we move clockwise:

The bottom line: to read wind direction is not difficult, it is easy and interesting. It is a very useful skill you may use while doing your favorite sports and outdoor activities.

Where to get wind direction forecast?

Since Windy.app is an app for wind sports, wind data is "scattered" throughout the app — it's very hard to miss it. You can find out the current wind direction as well as the wind direction forecast in 35 different ways in the app!

In this short tutorial, we'll tell about the top five ways from simple to more complex:

The wind direction in the form of arrows is indicated on the widgets of the spots closest to you, including weather stations. Keep attention that in this case, the arrowhead points to the direction to WHICH the wind blows and the beginning of each arrow is FROM where it blows.

For example, on this screen below the wind is blowing from south-southwest (SSW) according to the weather station Olginate in Lombardy, Italy, and almost from the same direction in the city of Bergamo and on the Dervio kitesurfing and windsurfing spot on the Como Lake with 2 and 3 m/s: 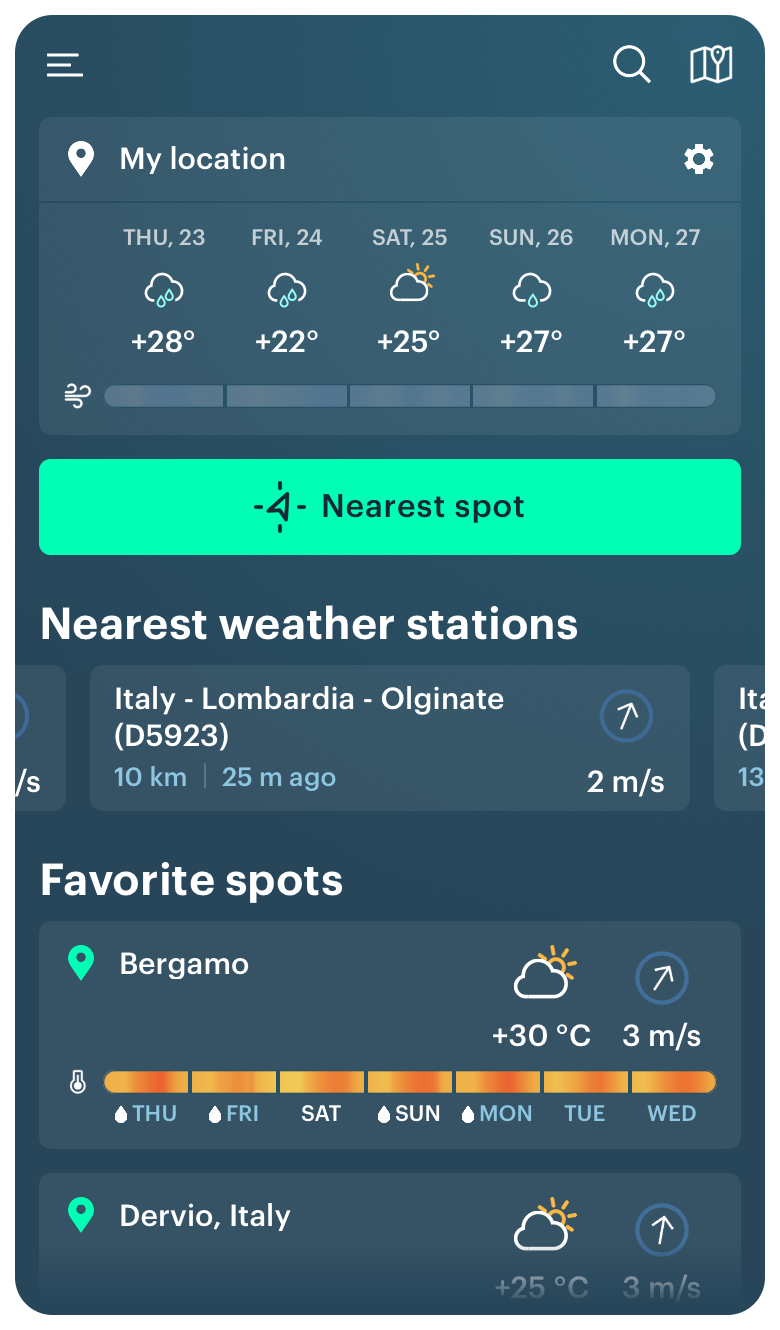 Wind Direction feature on the Home Screen in the Windy.app for iOS

When you go to a particular spot screen, you see the wind rose — the one mentioned above.

On this screen of the weather forecast for a small town Ny-Ålesund on the island of Spitsbergen in Svalbard Archipelago, Norway, the wind is blowing mostly from the south (S) but also from the north-west (NW) during the day: 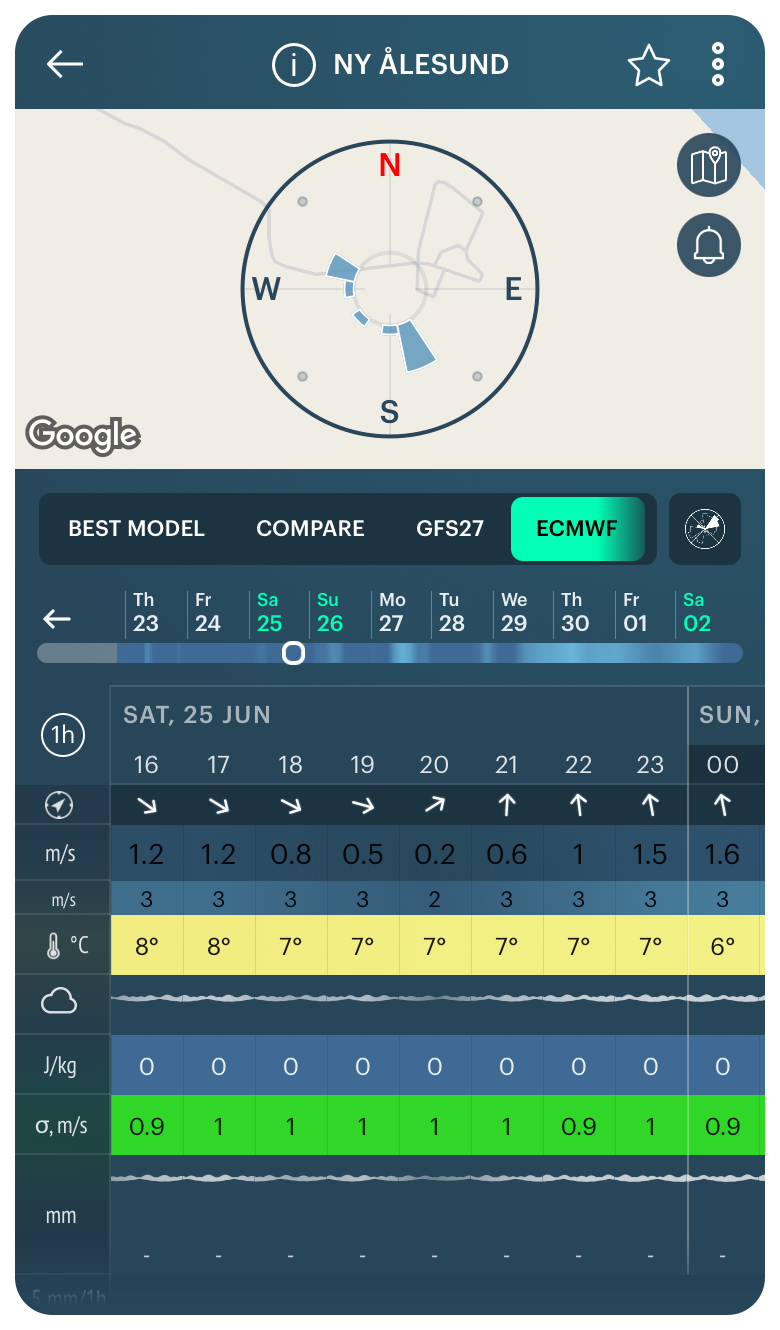 Wind Direction and Wind Rose features in the Windy.app for iOS

Learn more about how to read the wind rose in Windy.app. Scroll down the screen to see wind direction forecast for the next hours during the day and for the next days.

First of all, on the Wind map, you can estimate the direction visually. And it is very convenient and useful for a general understanding of wind direction in the region: 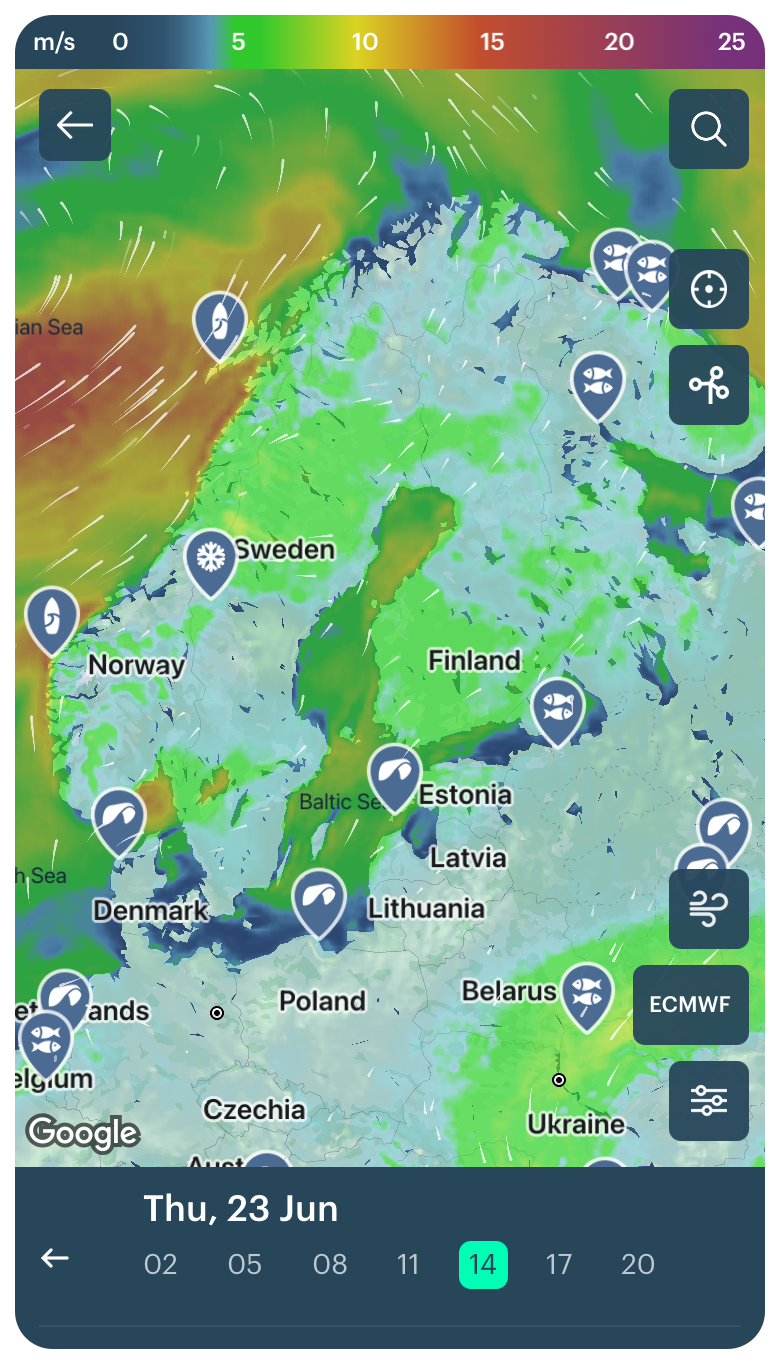 Wind direction feature on the Wind Map of the Weather Map in the Windy.app for iOS

Then, by clicking on a particular spot or any point on the map, you will see the wind direction information for this spot or a point.

For example, on the same Ny-Ålesund spot in Norway, the wind is blowing from the east (E) with 1.9 m/s wind speed, so it is also a very slow wind. Once again: look at the BEGINNING of the arrow (the line), and not at the end (arrow) to determine the direction FROM which the wind is blowing. But in this case, you do not need to read the arrow — the wind direction is written in letters — "E": 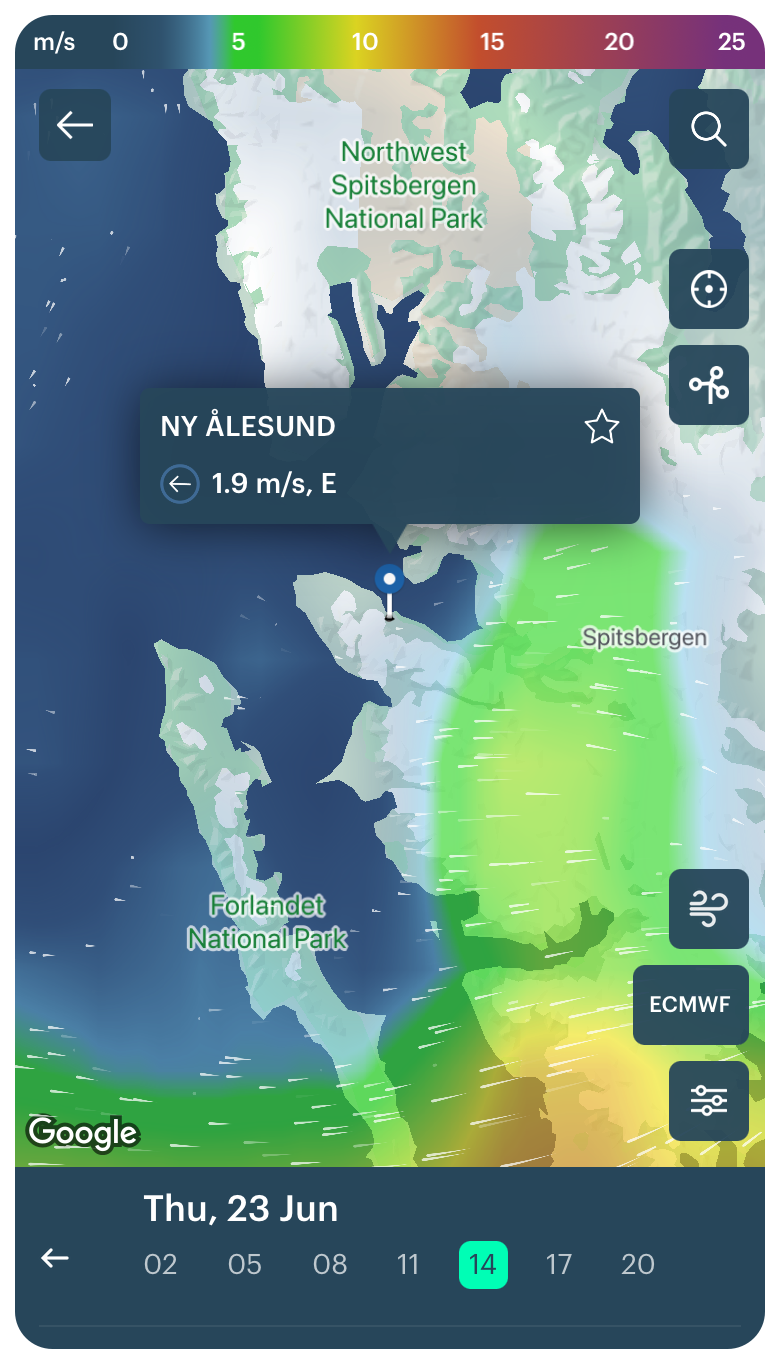 Wind Direction feature on the Wind Map of the Weather Map in the Windy.app for iOS

On the meteorological maps, it is common to use wind barbs to show the wind speed and direction at the same time. Here, the wind direction is the position of the barb (line and feather(s)) in 360 degrees. In other words, the wind blows from the feather(s) to the opposite direction — often dots.

Activate the Wind Barbs feature on the Wind Map in the map's settings by clicking on an icon in the lower right corner of the screen. On this screen of the same Norwegian coast in the area of a larget city of Bergen, the wind is blowing from the south (S) with the wind speed between 5 and 20 knots (10 m/s, 23 mph), what you can also determine by two colors of the map: green and yellow.

Yes, reading barbs is a bit more difficult than arrows, so learn more about how to read wind barbs. 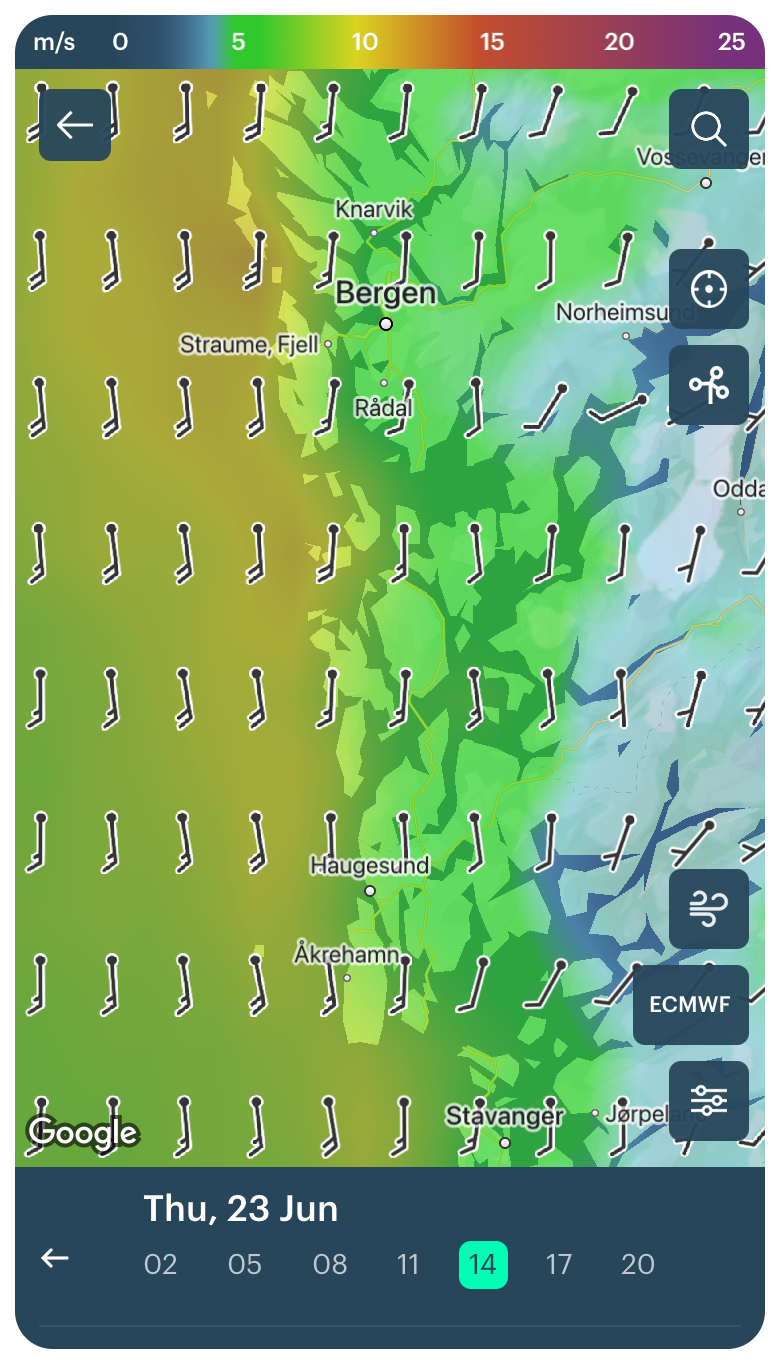 Wind Direction and Wind Barbs features on the Weather Map in the Windy.app for iOS

Activate the Isobars feature to see how the wind blows in your region and learn more about how to read isobars in Windy.app: 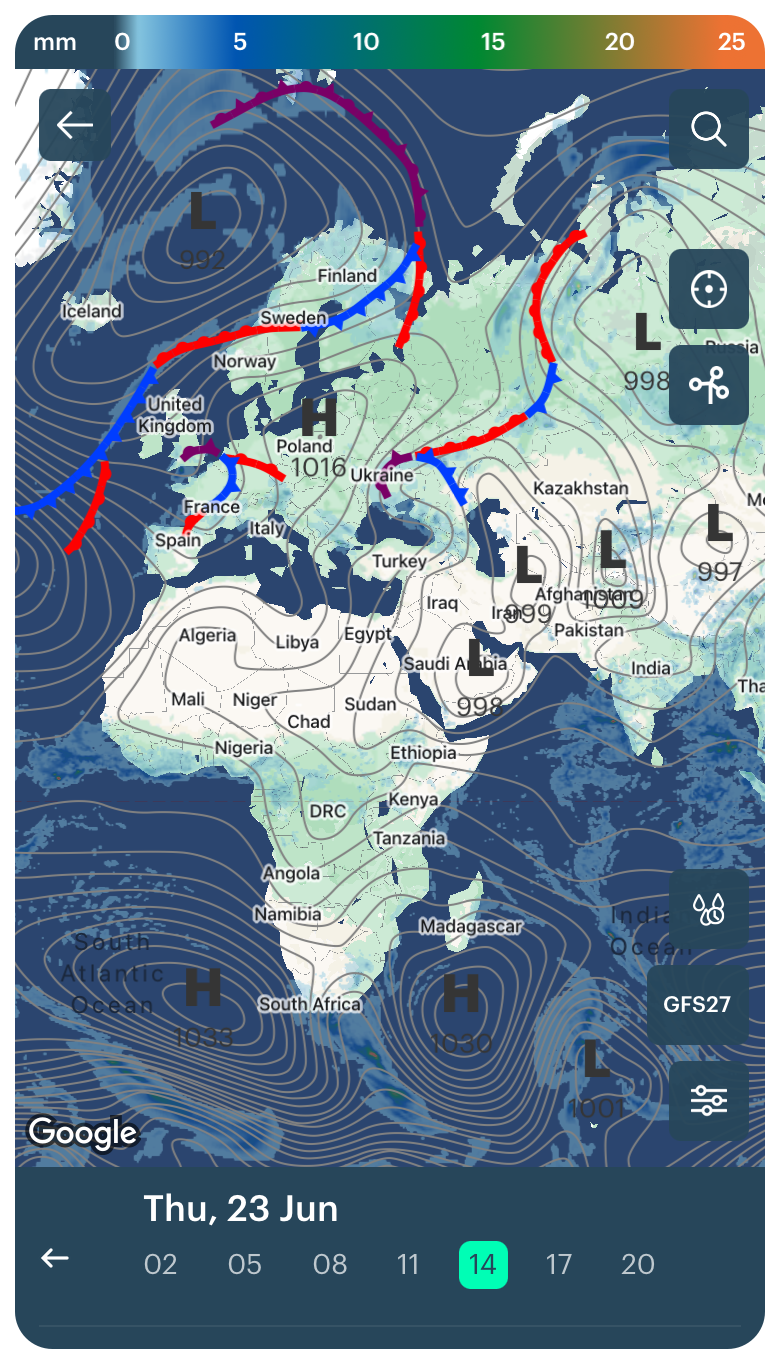 Wind Direction and Isobars features on the Weather Fronts Map in the Windy.app for iOS

Text: Ivan Kuznetsov, an outdoor writer from the Dolomites, Italy, and Karelia, Finland, with 10 years of professional experience. His favorite sports are cycling, hiking, and sauna. Read his other articles.

How to read Wind Chill chart to stay comfortable outdoors

How to read a wind map like an expert

The collection of articles about wind on the Windy.app site