What is an isobar map?

The isobar map is one of the four most common types of weather map that shows atmospheric pressure (three other maps / weather elements are air temperature, precipitation and wind).

A modern isobar map is a digital interactive (live) map you can get on some website or rather in a weather application for your smartphone and tablet.

With the development of digital technology, it is also has become possible to separate the isobar map from the other weather elements, as well as to create separate maps for many of them. Previously, on paper maps, the elements were combined on one general weather map that included wind, precipitation, temperature, cloud cover, and more.

Accordingly, an isobar map is needed to get the appropriate forecast in a visual form that the usual forecast table, graph, and other forms of presentation do not provide. It is also a way to get a bigger weather picture. 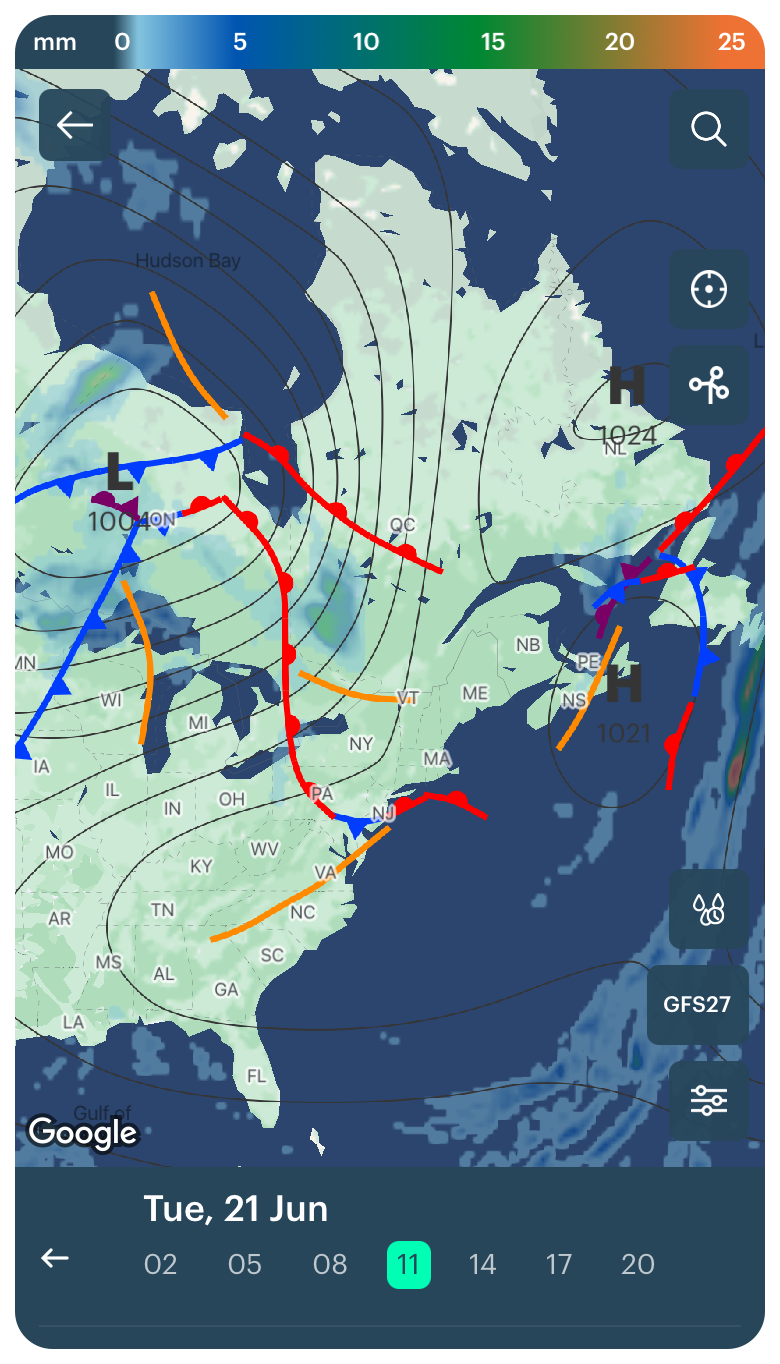 Weather fronts and isobars map in the Windy.app for iOS

How to read isobar map?

To read any type of weather map correctly, you need to know that there is no single weather map, there are many, and they look different with different information and visualization depending on the source.

However, the weather map generally consists of the following basic elements, so keep your attention on them, while reading the map:

So, let's figure out how to read isobar map using the Windy.app as an example in 10 steps:

1. Let's start with the atmospheric pressure itself. It is the pressure of air on the Earth's surface and all objects on it, including human beings. In other words, it is the weight of the atmosphere.

3. So one of the two main things, which isobar map shows you is areas with different atmospheric pressure. You see the big letters L and H "scattered" around the globe.

Learn more about cyclones and anticyclones in this article.

4. The numbers on a map under the letter H and L, as well as along the lines show you the exact atmospheric pressure for different areas.

The pressure is also different at different heights, regions and weather conditions.

Isobar map is a map with continuous lines that curve at different angles and form rings. These are isobars.

Isobars are a type of isolines, lines that are used to show areas with the same values on a flat map for different weather and other parameters — wind, temperature (for this used isotherms), and, for example, atmospheric pressure. Isobars show just that. That is, there will be the same pressure along the entire length of the line on the map. 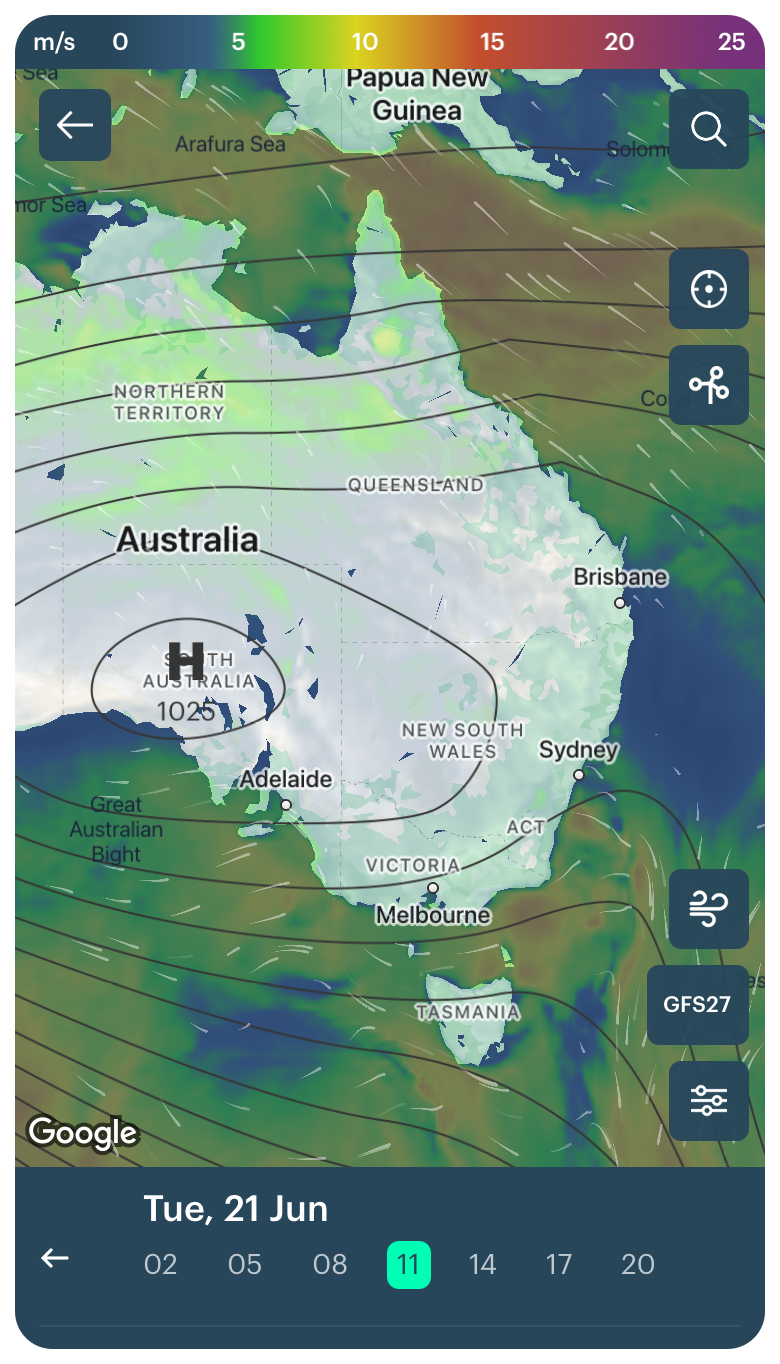 Weather fronts and isobars map in the Windy.app for iOS

6. Air masses always tend to move to lower pressure areas. The air also do it using the shortest way — at a right angle to the isobar. The perpendicular is called a normal line.

7. Because the pressure difference is the only thing speeding wind up, the isobar map is also very useful for understanding of not only to know the H and L pressure areas but also what kind of wind it is now and where it is blowing.

The quicker the pressure changes from spot to spot, the higher the wind speed is. All the other forces, such as friction, only reduce wind speed and/or change its direction.

8. The wind would be perpendicular to the isobar if the Earth wasn't spherical and rotating around its axis. But instead, all moving objects, including wind, are subject to the influence of the so-called Coriolis force.

9. It deflects wind from the normal line to a certain angle. In the Northern Hemisphere air is rotated clockwise (to the right) and in the Southern — counterclockwise (to the left) with reference to the movement direction.

The friction between air and sea is lower, that's why it's deflected more there. The angle is usually 40–50° above land and can reach 70–80° above sea — then the wind blows practically along the isobar.

10. The higher the pressure difference between two areas is, the higher the wind speed is. That's why isobars that are close to one another mean high wind speed.

Where to get isobar map in Windy.app?

The isobar map in the Windy.app is a general weather map layer. To use it, go to the appropriate section from the Home screen or from any spot screen and activate the feature clicking on the Weather Fronts and Isobars icon in the map's settings. 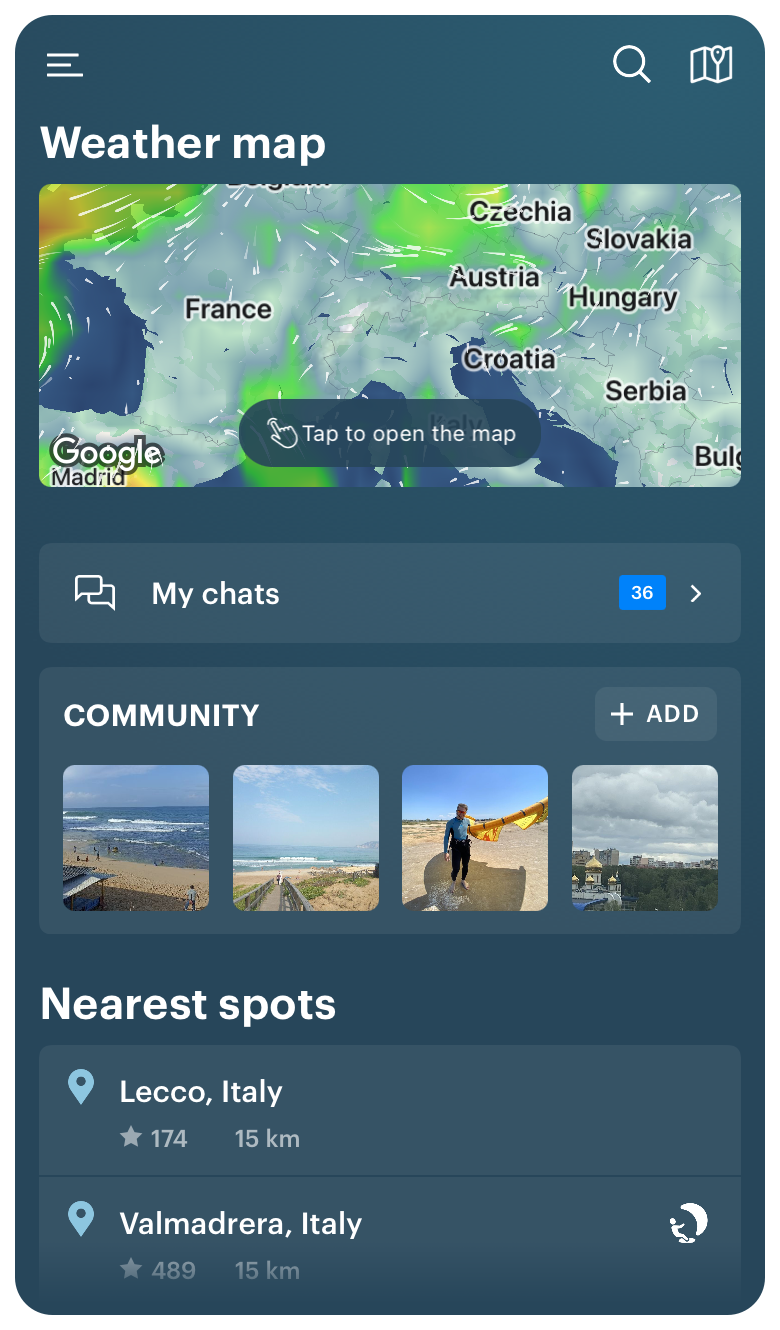 Weather map on the Home screen in the Windy.app for iOS

The basic meteorology for yachtsmen and yachtswomen