Latitude and longitude are two of the most essential things you need to know to determine your exact location in this chaotic world or to find any point on the map, whether it is a spot for outdoor activities or a natural/cultural landmark, as well as for navigation purposes. In this article, we will understand how to read the latitude and longitude, so you can say "I'm right here" or "I need to be in this place".

What are latitude and longitude?

Latitude and longitude are two relatively simple concepts that are the basis of the geographic coordinate system (GCS). These are imaginary lines that circle the entire earth, at some distance from each other, and are measured in degrees, that is, located at a certain angle in relation to the imaginary point at the very center of the globe.

We have developed it to determine our location on earth (as well as generally any point in space) and to move around it, that is, for navigation purposes.

Geographical coordinates are measured using various instruments. In the past these were analog devices, today longitude and latitude are easily determined with a variety of electronic tools, including smartphones with GPS (Global Positioning System).

To make it easier to understand, this is similar to the way city streets are arranged. With one important nuance: these are structured and well-planned streets of Manhattan in New York, crossing each other at right angles and not at any other angle, as may be the case in the labyrinth of streets in medieval cities of Europe. For example, there are so many crossroads in New York, so it is customary to say: "Let's meet at Broadway and 5th Avenue". 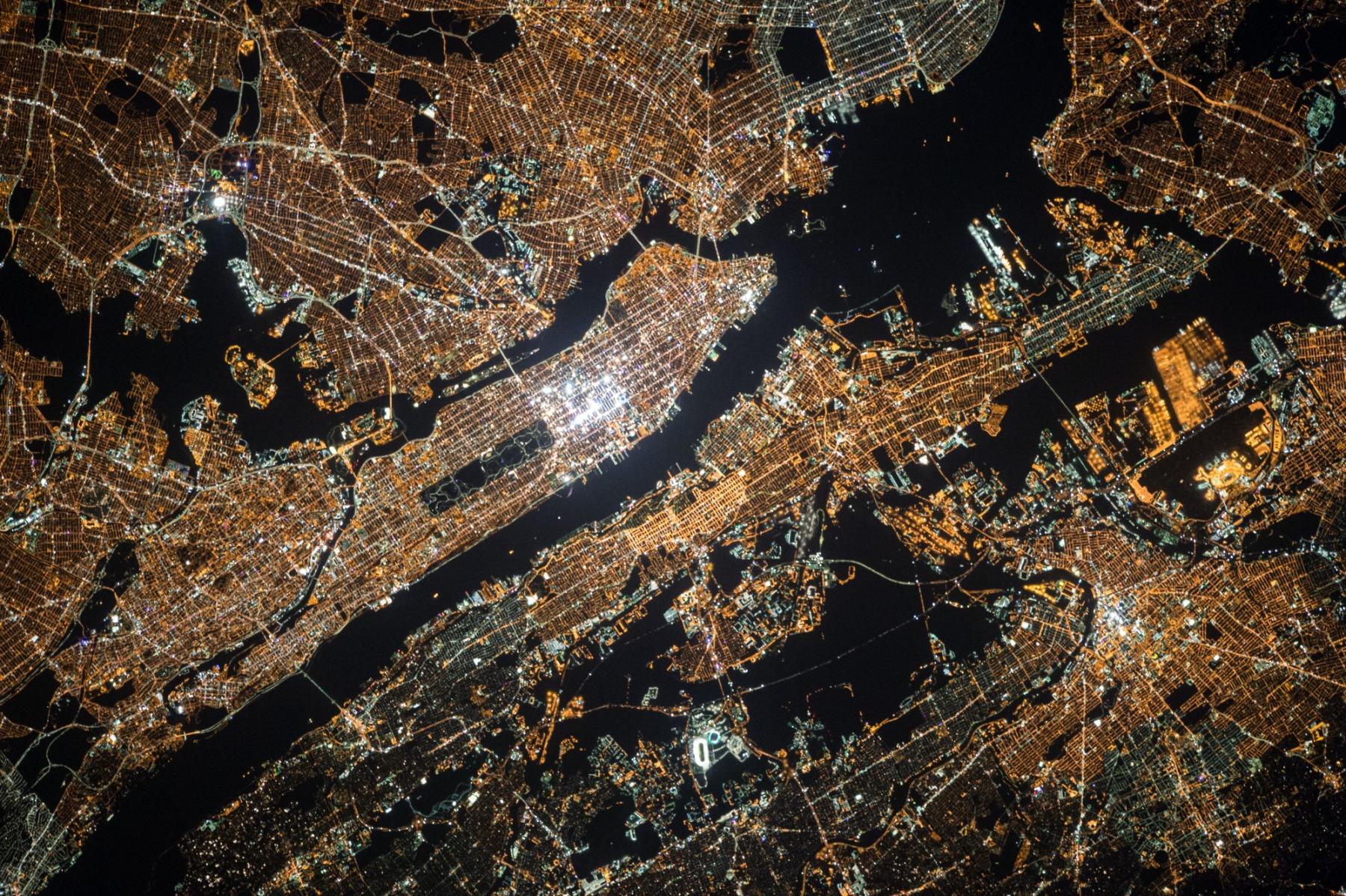 However, there is another important concept in the coordinate system: the reference point, or rather, the line of reference, or rather, two lines:

A necessary side-step: why this place? According to NOAA, "in 1884, representatives at the International Meridian Conference in Washington, D.C., met to define the meridian that would represent 0 degrees longitude. For its location, the conference chose a line that ran through the telescope at the Royal Observatory in Greenwich, England. At the time, many nautical charts and time zones already used Greenwich as the starting point, so keeping this location made sense." 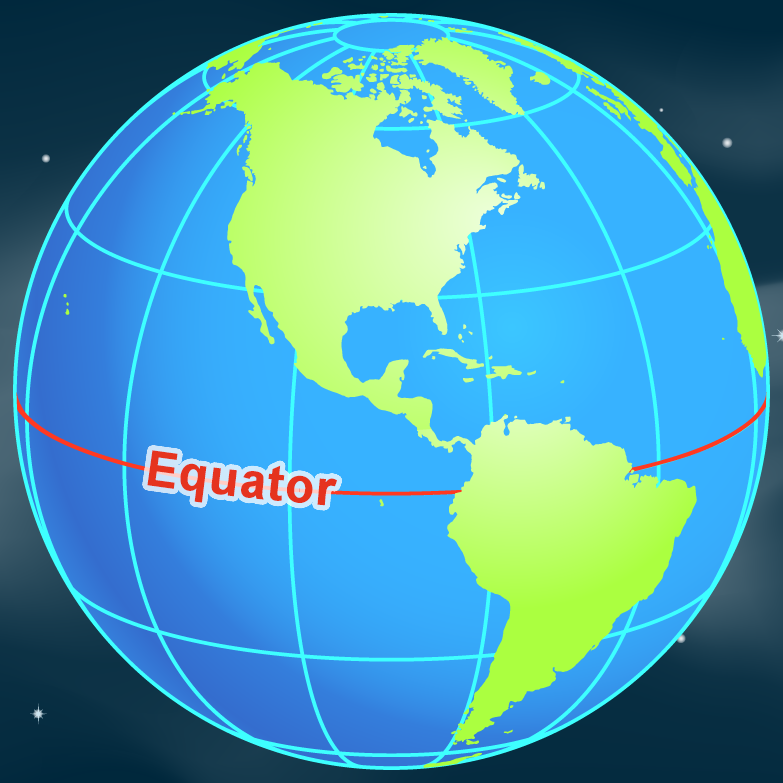 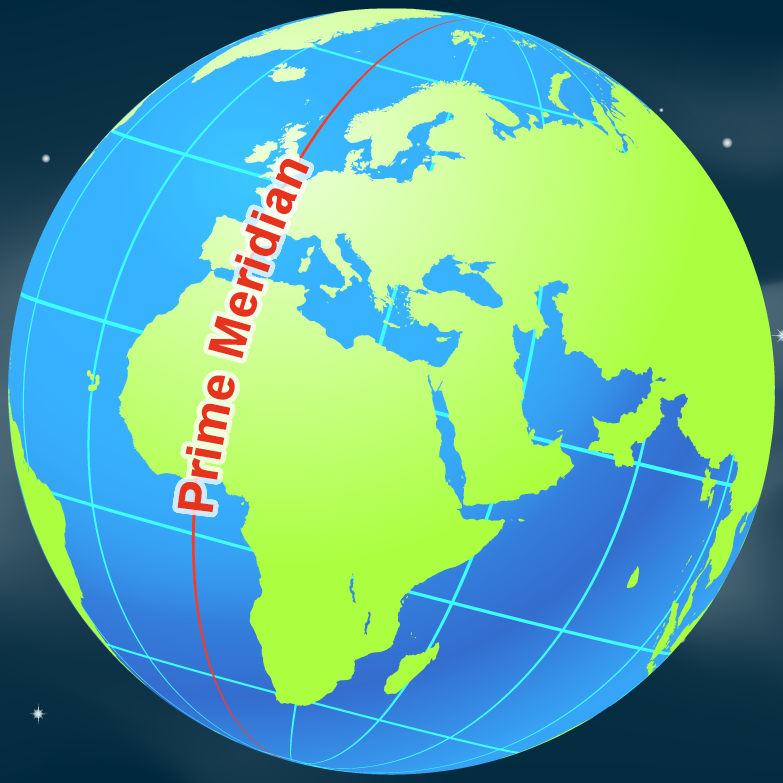 The next thing to know, which, however, has already become clear, is that the distance from one parallel or meridian to another is 1°. In actual terms, one degree covers about 111 kilometers (69 miles). But that's only at the equator. Because of the most round shape of the earth, by 60 degrees north or south, that distance is down to 56 kilometers (35 miles) and by 90 degrees north or south (at the poles) it reaches zero km (mi).

The place where the equator and the prime meridian meet is located in the Atlantic Ocean roughly 600 km south of the coast of the country of Ghana in West Africa. This place is called the "Null Island", which is also imaginary. There is a weather buoy moored at the coordinates of Null Island, in the Gulf of Guinea at 0°N 0°E.

Summarizing the above, if you stretch the globe into a two-dimensional plane in the form of an ordinary paper map, it can be divided into four parts (the name of the part of the world is given in parentheses but in the broadest sense):

Thus, due to a geographic coordinate system consisting of latitude and longitude, each point on earth has precise coordinates consisting of these two units. (To fully determine the position of a point in three-dimensional space, you need a third coordinate — the altitude above sea level). 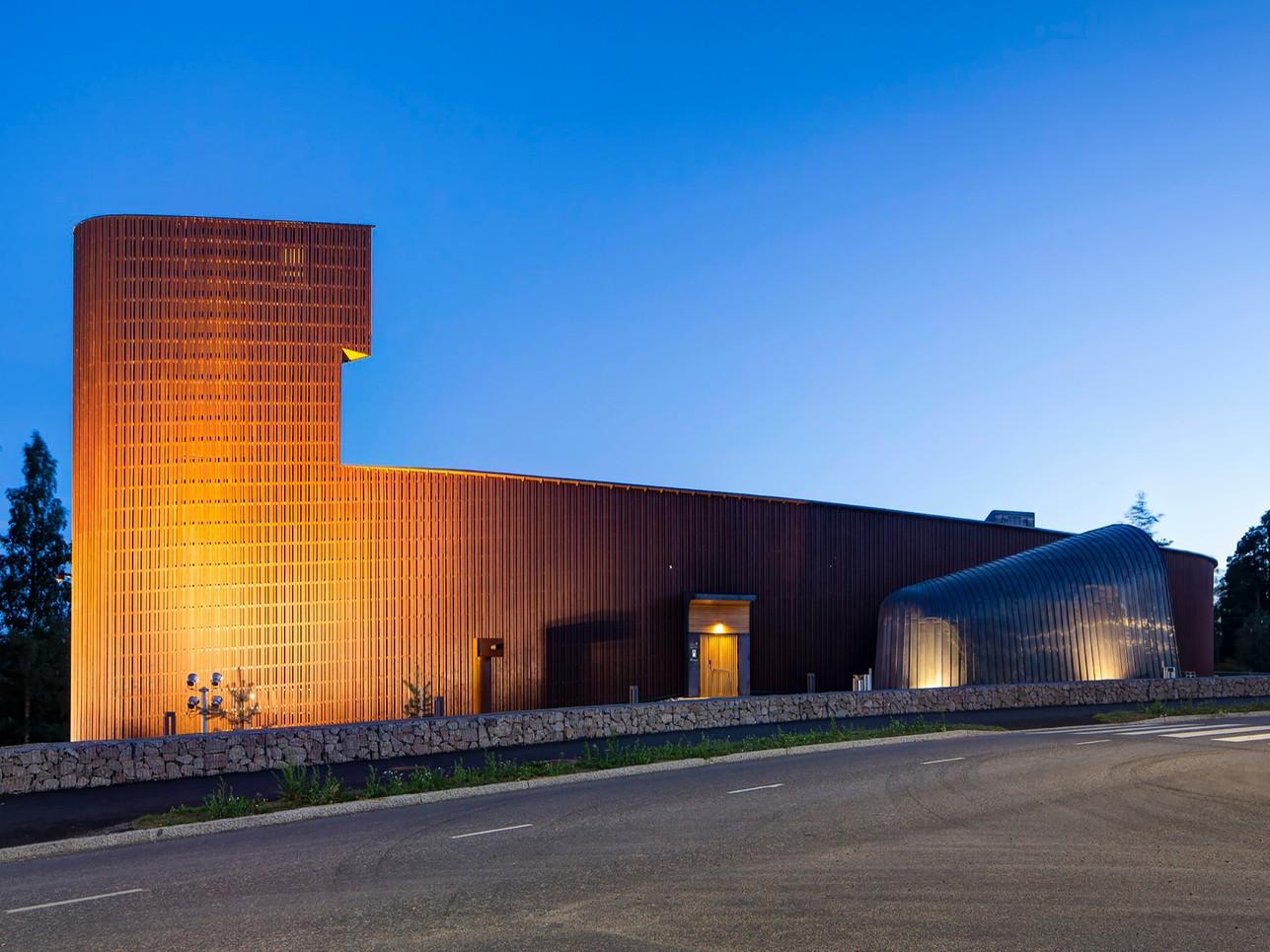 How to read longitude and latitude?

To correctly read geographic coordinates — longitude and latitude — it is important to know three main things:

First, they always start with latitude (equator and north and south from it), followed by longitude (prime meridian and west and east from it. Once again, latitude always comes first.

Second, there are three common systems of showing latitude and longitude as geographic coordinates of a place, in order of popularity of their use in modern devices. In particular, Google uses them. For example, the coordinates of the famous unfinished cathedral La Sagrada Familia in Barcelona, Spain are:

So, coordinates are most commonly specified in DD format. The DMS format was used previously, but it is still actively used: for example, in the metadata of pictures on your camera. The third, DMM, is the rarest format, but you can also find it.

How to read decimal degrees (DD)

Next, the long row of numbers after the dot is actually why it is called "decimal degrees". In different devices, you may see a different number of digits, and they may change after the point. Don’t be confused, there is no error here.

For example, when you see the coordinates of a place on Google Maps, they show six digits after the dot, but when you copy and paste them elsewhere, you see 15 digits. The rule of thumb is: that the more digits, the more accurate the coordinates are (assuming the accuracy of the device itself), but sometimes there are fewer because different devices measure differently. Usually, 8 digits indicate very accurate coordinates. Here is an object of what scale can be determined by this system:

By the way, to find out the geographical coordinates of any place on the Google Map, just right-click on it, and then on the coordinates themselves to copy them. By analogy, you can paste the coordinates into the search field and determine what place is behind them.

How to read degrees, minutes, and seconds (DMS)

How to read degrees and decimal minutes (DMM)

The third format, DMM, consists of degrees and decimal minutes, i.e. is a mix of the first and the second.

Another important difference between the three systems is that the DMS uses the letters to represent one of the four cardinal directions: N, S, E, and W (north, south, east, and west), but the DD and DMM usually do not. How, then, do we know which part of the earth we’re talking about? Note the minus (-) signs in front of the numbers with degrees.

The minus in latitude tells you that it is south (S), i.e. degrees with negative values, which are located BELOW the equator, i.e. below zero.

Similarly, a minus in longitude tells us that it is west (W), that is, degrees with negative values, which are located to the LEFT of the zero meridian, that is, below zero. It is like with time zones, which are also counted from Greenwich: +1 hour, +2 hours, and so on as one moves eastward. When it's evening in Japan, it's still morning in France, and it's the previous day in the United States.

For example, let's go back to the four-parts-of-the-world example:

But in some sources, such as Google search results or in the Windy.app mobile application, you do not need to remember the minus. In the decimal degrees (DD) format, you can also sometimes see letters for the side of the world before or after degrees, for example, N 41.40338, E 2.17403 or 41.40338 N, 2.17403 E. This is done for a quicker understanding of coordinates.

Also, pay special attention to the punctuation in all three formats, and especially in DD coordinates — it is very important. Degrees are and should be followed by a dot, not a comma. If you use a mobile app on your smartphone, for example, to search for a place, it probably won’t find it:

Finally, what to do if you see one format but you need another? You can easily convert one to the other. This can be done with any online converter, which can be found on the Internet, although there is also a manual conversion for those who had an A in algebra in school.

Where to get longitude and latitude?

In the Windy.app, which contains a database of tens of thousands of spots for dozens of sports, you can find the exact geographic coordinates of these spots or any point of the world in different formats in several places and in different ways.

The easiest one is to simply click on the Weather Map at any location and get the coordinates in a pop-up window. 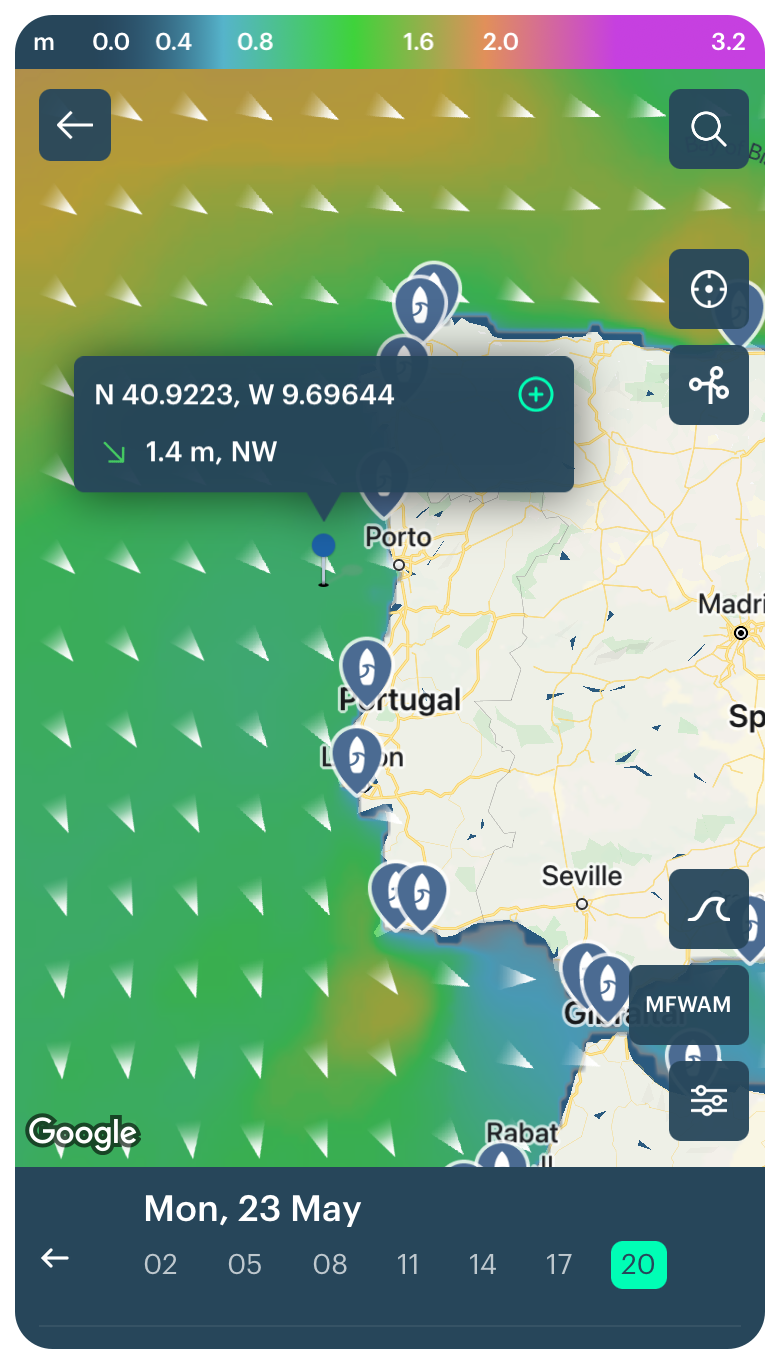 Geographic coordinates in the DD format on the Weather Map in the Windy.app for iOS

Or, it could be a particular spot, where you can see the DMS format. In the Windy.app, it is available for marinas as in the case of Marina de Cascais in Portugal. 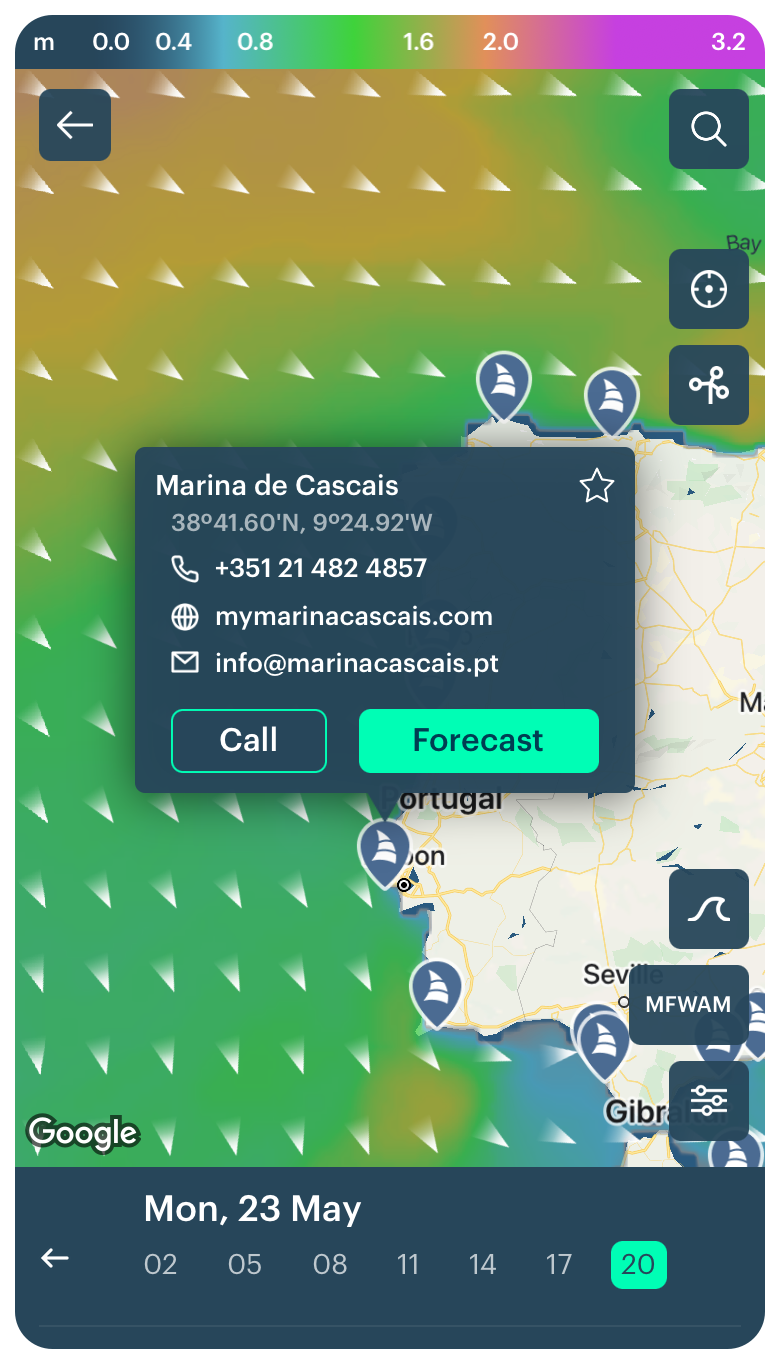 Geographic coordinates in the DMS format on the Weather Map in the Windy.app for iOS

Learn how to find out geographic coordinates for other marked spots or the spots themselved using coordinates in a separate tip in the Support section of the site.