In this article we will explain how thunderstorms work and why does lightning occur.

It all starts with the occurrence of cumulus clouds – we’ve already discussed them. These are the clouds that bring showers.

Let’s recall: air closer to the ground gets warmer and starts to rise because warm air is always lighter than cold one.

The warmer the air is, the higher it can rise. Thunderclouds grow vertically and reach high altitudes. 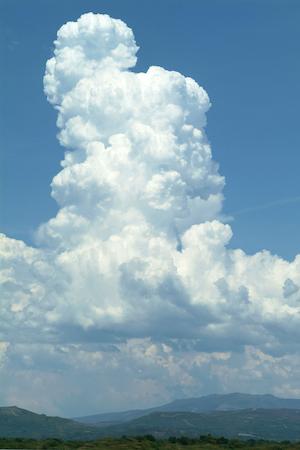 It’s usually very cold at high altitudes – reaching them, the upper part of the cloud starts to “freeze up”. Eventually its top consists of ice crystals and snowflakes. But the heating up doesn’t stop in the lower part – currents of warm humid air rise from the ground.

Warm air inside the cloud rises too, leaving a void in its place, like a vacuum – and it increases the suction force – like inside a vacuum cleaner. New and warm air tends to replace the void over and over again.

This process turns the cloud into a “pump” which starts to inhaust the warm humid air under it with a greater force.

Here we only have to remember that a thundercloud involves very strong air currents.

What does it have to do with lightning?

First, let’s recall the positively and negatively charged particles (+ and -).

We and everything around us consists of tiny particles - atoms. We know that from school. Atoms consist of protons, neutrons and electrons. Now let’s just focus on electrons. Electric current is a movement of electrons.

• If an atom lacks electrons, it’s positively charged (+) and ready to receive electrons “upon itself”.

• If it has at least one extra electron, it’s negatively charged (-) and ready to start to give electrons “from itself”.

In a normal environment any object is neutral - with an equal number of positive and negative charges. That’s why you can, for instance, use a computer without getting an electric shock.

But sometimes I do!

A common example - it’s winter, heating is on, the air gets dry. Before, water in the air could give or receive extra charges, maintaining their balance. And now, when the air is dry, you transmit the charges. For example, walk barefoot on the carpet - giving it a part of the electrons. Now you are positively charged as you lack electrons. Once you touch a metallic object - there’s a spark (metal has lots of free electrons).

Where were we? The cloud?

As we’ve established, a thundercloud means powerful air currents. They knock together different particles - specks of dust or salt from the ocean. As it happens with the carpet - when they collide, the particles give their electrons to other particles.

Electrons also have weight (albeit really small). The particle with more electrons is heavier. That’s why negative particles (with extra electrons) are heavier. They move down to the lower part of the cloud while the lighter ones stay at the top.

Meanwhile the area on the ground under the cloud is positively charged as it has sent its electrons to the cloud with the evaporated water.

Besides, it tries to find the closest grounded point. That’s why lightning strikes high trees, poles and buildings in the first place.