What is Bora (wind) and how does it form?

The bora is a strong cold wind. Such winds are observed in several places on our planet:

- on the northern coast of the Adriatic Sea,

- on the western coast of Novaya Zemlya

- on the Crimean coast of the Black Sea

- on the shores of large lakes

Places where bora is observed

Wind speed during the bora can exceed 60 m/s, and some gusts reach 100 m/s. Such winds are categorized as storm or hurricane on the Beaufort scale - they cause a lot of destruction, as well as fatalities.

Where does it come from?

The name of the wind comes from the ancient Greek word 'boreas', which means 'northern'.

To the ancient Greeks, Boreas was the god of the stormy northern wind. They believed he lived in the north of Ancient Greece. It is from the north (or northeast) that the bora comes most often.

How does the bora form?

There are unique natural conditions favoring the formation of this wind in places where the bora occurs. What are these conditions?

It is a low mountain range stretching along the coast of a sea or a large lake.

Further, we will look into the mechanics of the bora using the Novorossiysk bora, which is observed on the coast of the Black Sea, in Russia, as an example. 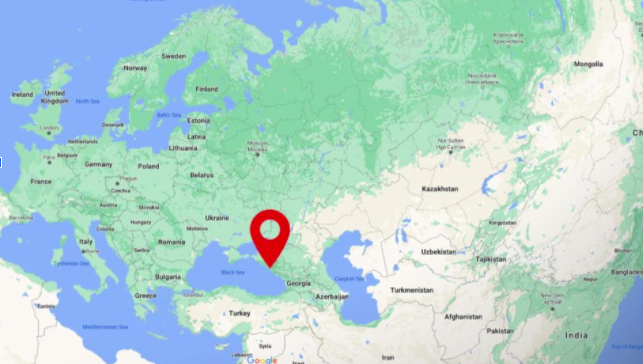 The bora forms here due to the presence of the low Markotkh Range (its maximum height is only 717 m).

The mechanism of the bora can be briefly described as follows.

1. A synoptic situation suitable for the bora occurs.

2. A wind current appears which moves from land to the water body.

3. The current collides with the mountain range.

4. The current flows around the range and bears down toward the sea. During the Novorossiysk bora, it bears down directly on the city of Novorossiysk.

To get what we see in the photographs (consequences of the bora), atmospheric pressure has to be distributed over a vast territory around the mountain range in a certain way.

Above the water body, the pressure has to be low.

This is possible in two cases: when the water is warmer than the land (like on unfrozen water bodies in winter), or when there is a cyclone over the sea. To the north or northeast of the range, the pressure, on the contrary, has to be high (an anticyclone should be located there).

The second stage is the development of the current.

We have described this in detail in the text about the mistral. A current moves from the anticyclone to the cyclone, it will then turn into the bora. The greater the contrast between the onshore and offshore pressure, the higher the wind speed.

The third stage: the current meets a mountain range.

If the barrier (the range) is not too high for the current (the limit is considered to be 1 km on average), and the speed of the current is high enough upon approaching the range (from 7 m/s), then the current moves up the mountain slope and, having crossed the range, plummets towards the sea.

The last and most important point is how exactly the wind moves down the range.

The bora is so strong and harsh precisely because, having crossed the range, the current speeds up. Why? Gravity acts on it. Besides, it starts to move in waves. The waves appear because the current meets an obstacle. Another factor is the current's contraction (compression) on the mountain pass.

The pattern of the formation of the bora. The current moves up the mountain slope and, having crossed the barrier, moves down the slope towards the water body. The mountain barrier creates a disturbance in the flowing current and it begins to move in waves.

The pattern of the formation of the bora. A constriction in the terrain contributes to the compression of the current. After that, it moves faster because of the smaller area and, therefore, a lower impact of the force of friction.

The peculiarity of the bora (if compared to the mistral, for example) is that the wind can cause a very significant fall in temperature. The air coming to the Black Sea (in the case of the Novorossiysk bora) can differ by more than 20 degrees Celsius. As a result, the temperature in Novorossiysk can drop to 35 degrees below zero with the arrival of the winter bora and the daily temperature drop can reach 40 degrees.

The destructive wind usually lasts in Novorossiysk from a couple of days to a week, and the longest episode of the bora lasted a month and a half. Every year Novorossiysk experiences about 50 bora days, most of them - in March and November.

Why is there so much frozen over ice and snow?

The sea gets very rough during the bora due to the wind which causes a lot of spray in the air. Therefore, if the bora is observed in winter, the sea spray raised by the waves and wind instantly freezes over on everything near the shore - port vessels, the seafront, and other urban infrastructure. The layer of the frozen-over ice can reach 4 meters.

A cloud wall over the Markotkh Range, which the residents of Novorossiysk call the beard of Boreas. Such a low overcast usually precedes the bora.

In different regions, there are different names for the bora. The bora dispersing waves in Novorossiysk and Gelendzhik bays on the Black Sea is often called the 'nord-ost', in Croatia it's 'scura' or 'bura'. Similar winds can be observed on the shores of large lakes, such as Lake Baikal - here it's the 'sarma'.