What are local winds and how do they work

These are winds that occur and are regularly observed in a certain place due to certain local characteristics (usually the terrain). In this new lesson of the Windy.app Meteorological Textbook (WMT) and newsletter for better weather forecasting you will learn more about what local winds is.

What is the difference between a local wind and ’just wind’?

The main features of a local wind are its regularity and the limited area where it is observed.

Trade winds, for example, are observed regularly, but in a huge area, so they are not ’local’. ’Just wind’, the direction of which is reported to us every day in weather forecasts, lacks regularity and can change its direction every day.

The most common example of a local wind are breezes. During the day they blow from the sea, and at night, on the contrary, towards the sea. This happens regularly, plus they occur in a limited area, on the coast — so these are local winds.

Today we will only discuss coastal local winds, and in the following letters we will talk about other winds!

Breezes occur when there’s a land and water boundary (e.g., the sea).

During the day, the land heats up faster than the sea. The air above warms up too, becomes light and rushes up. Cooler air from the sea immediately replaces it, heading towards the land.

In other words, during the day, the breeze blows from the sea to the land. The night breeze blows in the opposite direction, as the sea stays warm while the land cools down quickly at night.

The breeze is a weak (1-5 m/s) and slightly cool wind. Any coast is suitable for it. 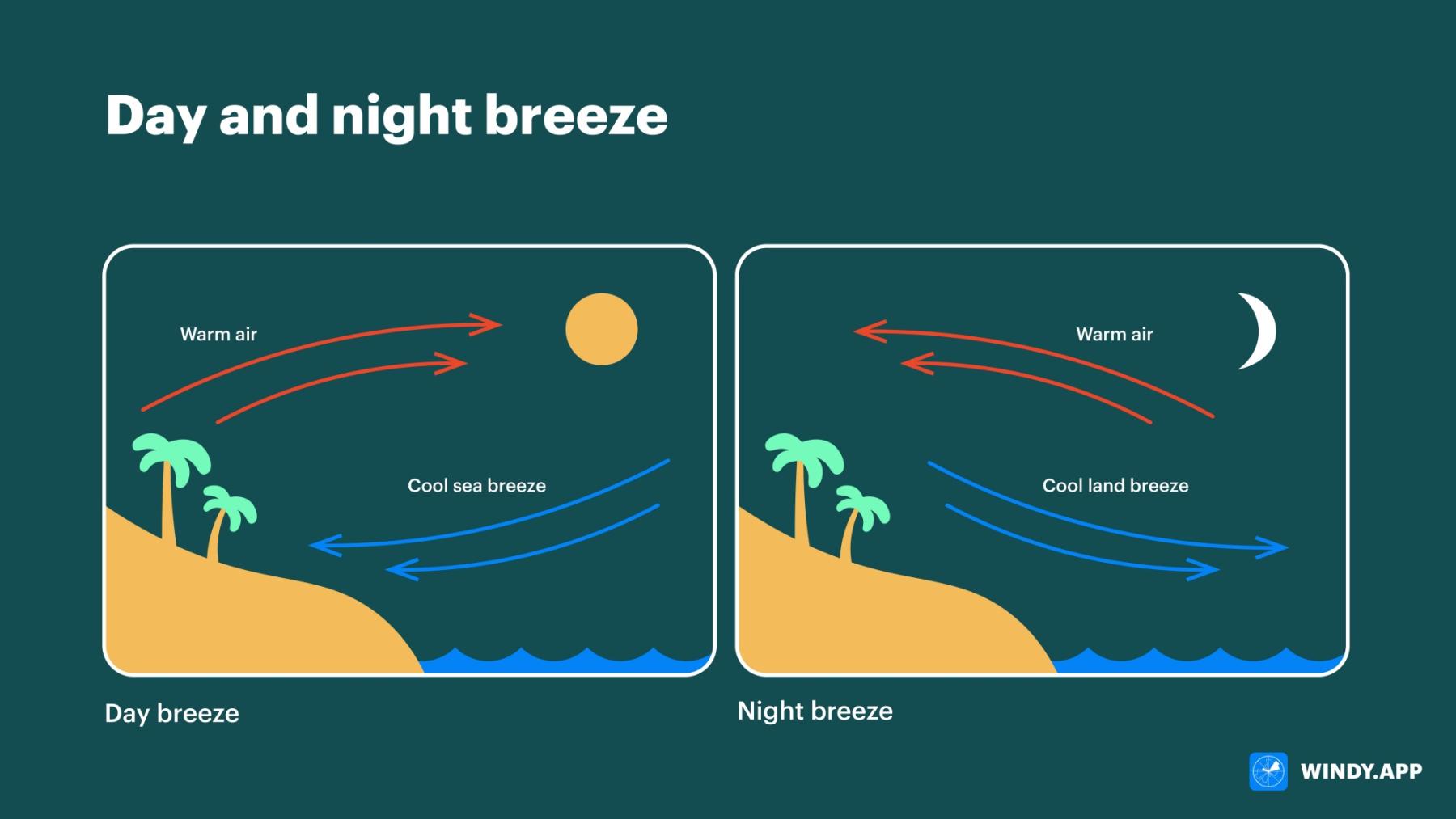 But local winds can also be very strong, with suitable conditions only in a particular part of the coast.

For example, the mistral. It can be very destructive and only occurs on the Mediterranean coast of France. Winds such as the mistral occur in other places too, but there they are called differently (bora, nord).

It is a cold and very strong wind. Its speed often exceeds 66 km/h (41 miles per hour). The mistral is responsible for an unimaginable number of broken masts and yachtsmen’s failed plans... Besides, in spring and summer the mistral comes to the region very dry and causes significant damage to agriculture.

Sometimes it lasts only one or two days, often several days in a row, but it can last even more than a week. In Marseille, in southern France, the mistral is observed most often — 175 days a year! It is the local characteristics of the region that make the wind strong and destructive. How does the mistral appear? 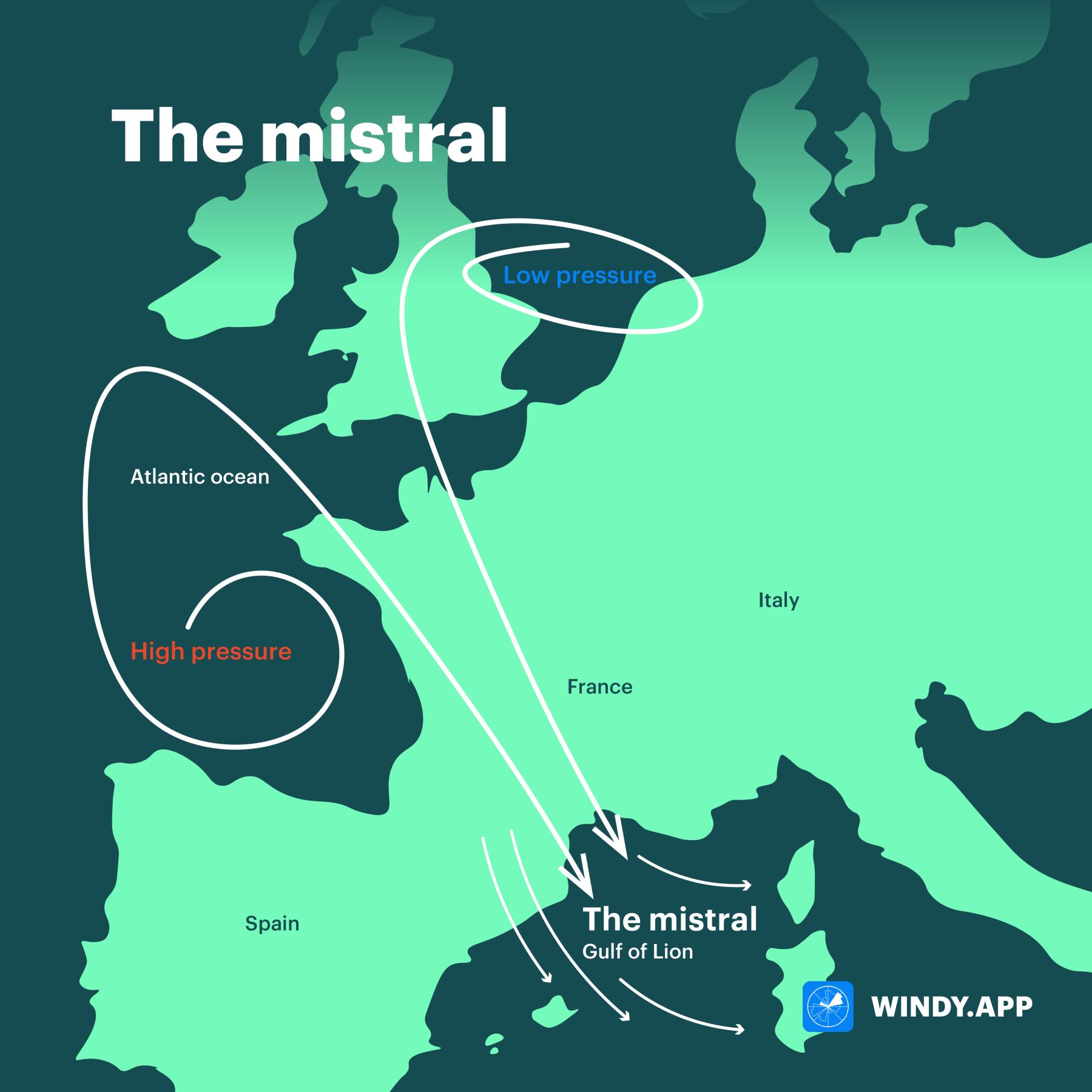 The territory and water area where the mistral can be observed, and the main wind directions. Illustration: Valerya Milovanova / Windy.app

On the shores of the Mediterranean Sea alone there are more than a dozen different local winds, both warm and cold. But not only yachtsmen, sailors or coastal residents face them. This topic is also relevant for those who come to the mountains — winds there also have their distinctive features. And of course, we will tell you about these local winds too.

Local winds are hard to predict, but some high-resolution models, like the AROME, sometimes can. See the local winds forecast in Windy.app.

Explore the different types of wind

What is Bora wind