What is the difference between weather and climate, and seasons. The simple explanation

Weather is one of the most commonly used words. We talk about weather most often, even when talking about our favorite sports and outdoor recreation. Its meaning seems obvious, but only until one thinks about what the weather exactly is. It’s the same with climate — one of the hottest topics today at all levels, from WhatsApp chats with your friends to international conferences dedicated to climate change. And then there are the seasons. What do they refer to?

In this article, we will give precise definitions of all of these terms and understand the difference between weather and climate, and seasons.

What is the exact definition of weather?

Weather is the sum of various atmospheric phenomena expressed in exact values (numbers) at a certain point in space at a certain time. In other words, the weather is what is happening in the atmosphere now, as well as what will happen in the future. The future is also called a weather forecast, and the past is called weather history.

The sum of values means that it is a set of phenomena and that they are connected, rather than one thing separate from the rest. That is, a temperature of +25 degrees Celsius, a wind speed of 10 m/s, or a heavy precipitation in the next 30 minutes in your forecast for hiking, kitesurfing and sailing is not weather in the fullest sense of the word. But all of this together — temperature, wind, precipitation, and many other parameters — is the weather.

Weather phenomena also include many other types of precipitation, cloud coverage of the sky, humidity, pressure, and more. Although it is clear that we do not need dozens of parameters at once in order to engage in a particular sport or in everyday life. At the same time, it is impossible to imagine weather without temperature, precipitation, and wind — three of the main weather parameters.

Bottom line: the weather is a current state of the atmosphere that changes constantly over minutes, hours, days, and weeks up to a month (the weather cannot be accurately predicted for longer periods). 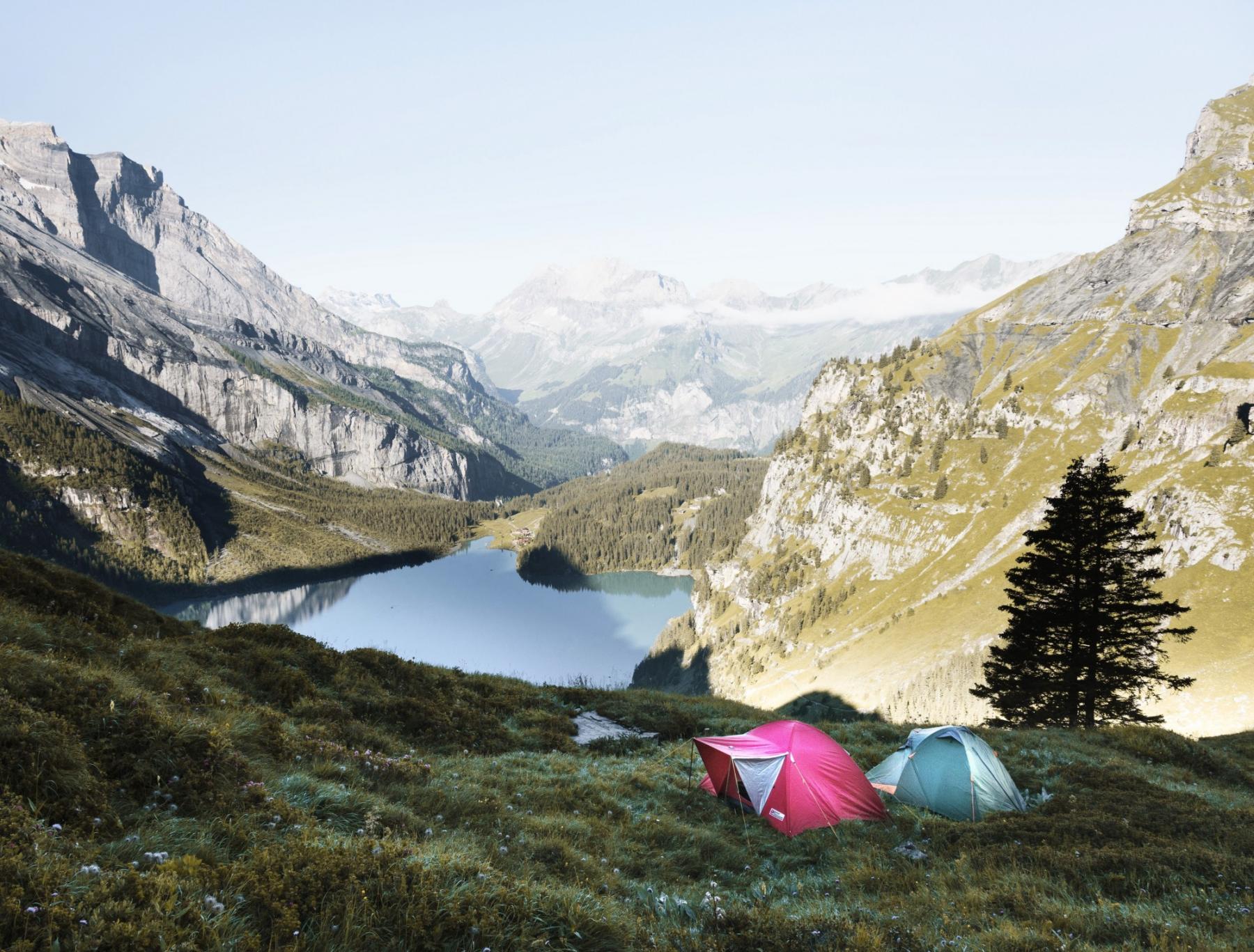 What is climate versus weather?

Climate is the average state of the atmosphere over a long period of time at the same point in space, region of the world, or the Earth as a whole. It is the same weather, but not here and now, but what it was (and will be) over a period of months to millions of years, but usually within a few decades. Climate is also closely related to geography, as the average weather in a particular place is characterized by its geographic location, which is always unique.

Say, if we take the weather for today and record it on the weather map, then multiply it by 30 days (month), then by 12 months (year), and then by 10 years (decade), and then calculate its averages for individual years, months, and days, we get the climate. Climate is also commonly said to be “what we expect from the weather”, as opposed to “what we have today”.

There are a few illustrative examples of climates that can be used to plan recreation on certain sports: “All summer months in the U.S. south is always hot — it is not the best time for going hiking to Zion National Park”, “Tarifa is the windiest place in Europe — you can almost always kitesurf there, ” “In February in Russia it snows the most during the winter — go to Sheregesh Ski Resors and others without thinking about whether it will snow or not.”, and so on and so on. Planning an active holiday in some place in some month or a season, you know about what the weather will be — more or less. Likewise, you know what it will be in five years at your home outdoor spot.

Bottom line: climate is the average weather or its character over decades in a certain place, whether it is the best kite-surfing spot in Tarifa, all of Western Europe, or the planet Earth as a whole. 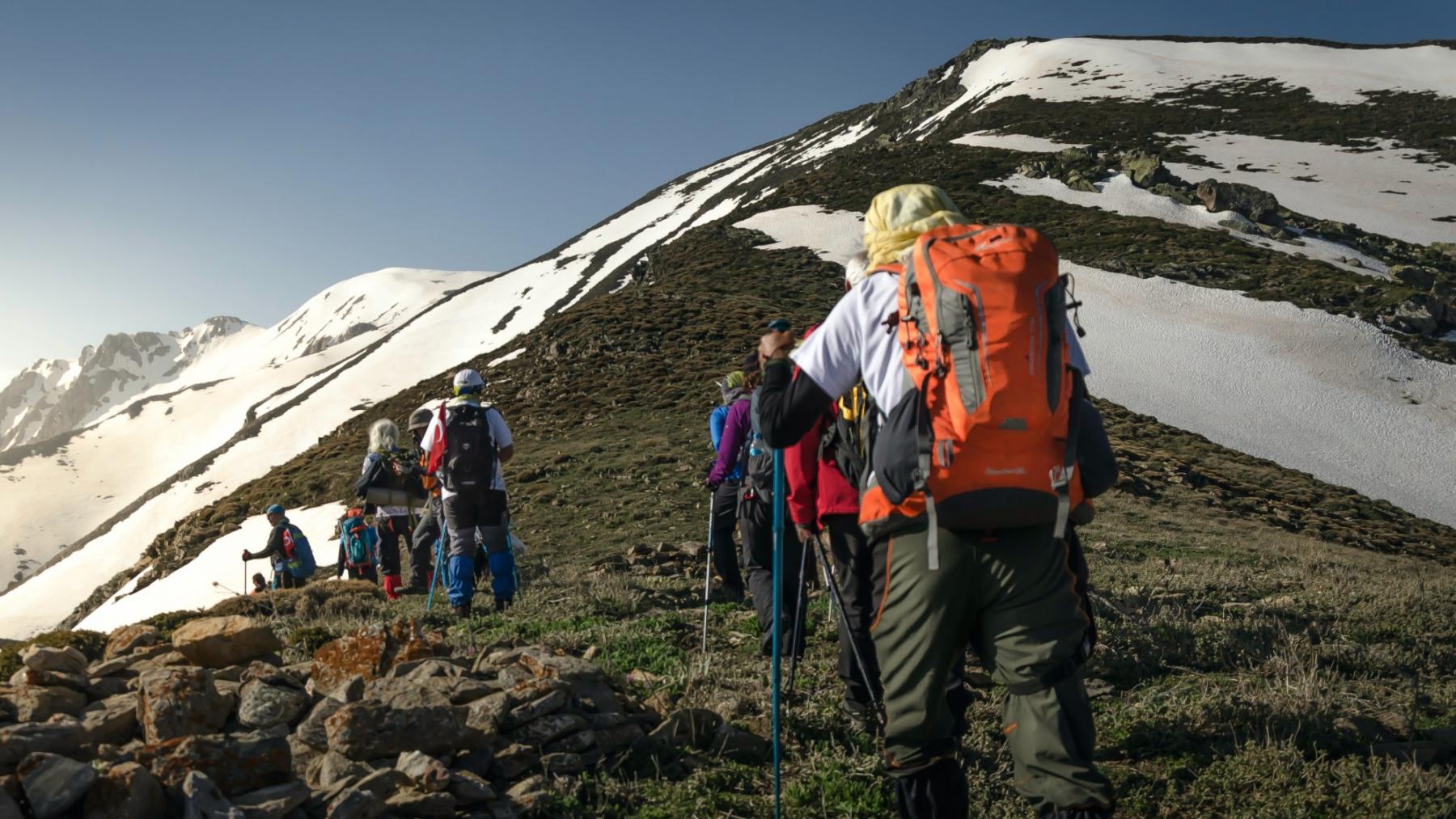 What then do we call the seasons?

The season is a concept that is closer to climate than to weather, although it derives directly from the latter. It usually refers to the meteorological or temperature seasons: summer is the hottest, winter the coldest, and spring and fall with their averages. But the seasons can be also calendar (every three months from the first day of each month) — they are also called quarters and, for example, astronomical — they are counted from the solstice and equinox.

The nature seasons change for two reasons: The Earth rotates around the Sun and simultaneously around its axis at an inclination of 66.56 degrees relative to the plane of its own orbit. Therefore, at different times of the year in different parts of the world, the earth receives more and less sunlight. The change of seasons also never occurs on the same day: they come earlier and later up to weeks.

The seasons also depend on geography. For example, in the Northern Hemisphere winter lasts from December to March, while on the Equator it never happens — it’s always hot summer there. In the Southern Hemisphere, everything happens in reverse order to the north. Or, in Southeast Asia, there is a monsoon or rainy season that does not exist in Western Europe. Some places on earth have distinct periods of stronger winds or storm activity such as hurricane season in the United States, while temperature and precipitation, by contrast, do not change throughout the year a lot.

Bottom line: seasons are climates based on temperature and sometimes other parameters (precipitation, wind, and more) usually over a period of three to four months in mid-latitudes to a half-year in the subtropics, Equator, and poles.

Where to find weather, climate, and seasons in the Windy.app?

The Windy.app is an app that is entirely dedicated to weather for outdoor activities, so you can find information on both weather, climate, and seasons:

In the app you can get 10 day weather forecast with wind, precipitation, air temperature, cloud cover — over a dozen parameters in total — literally everywhere from the Home Screen to a specific day in the Weather History. For example, the wind forecast can be found in more than 35 places in the app, which is very convenient — it’s always at your fingertips. More: you customize the forecast using the Weather Profiles feature. 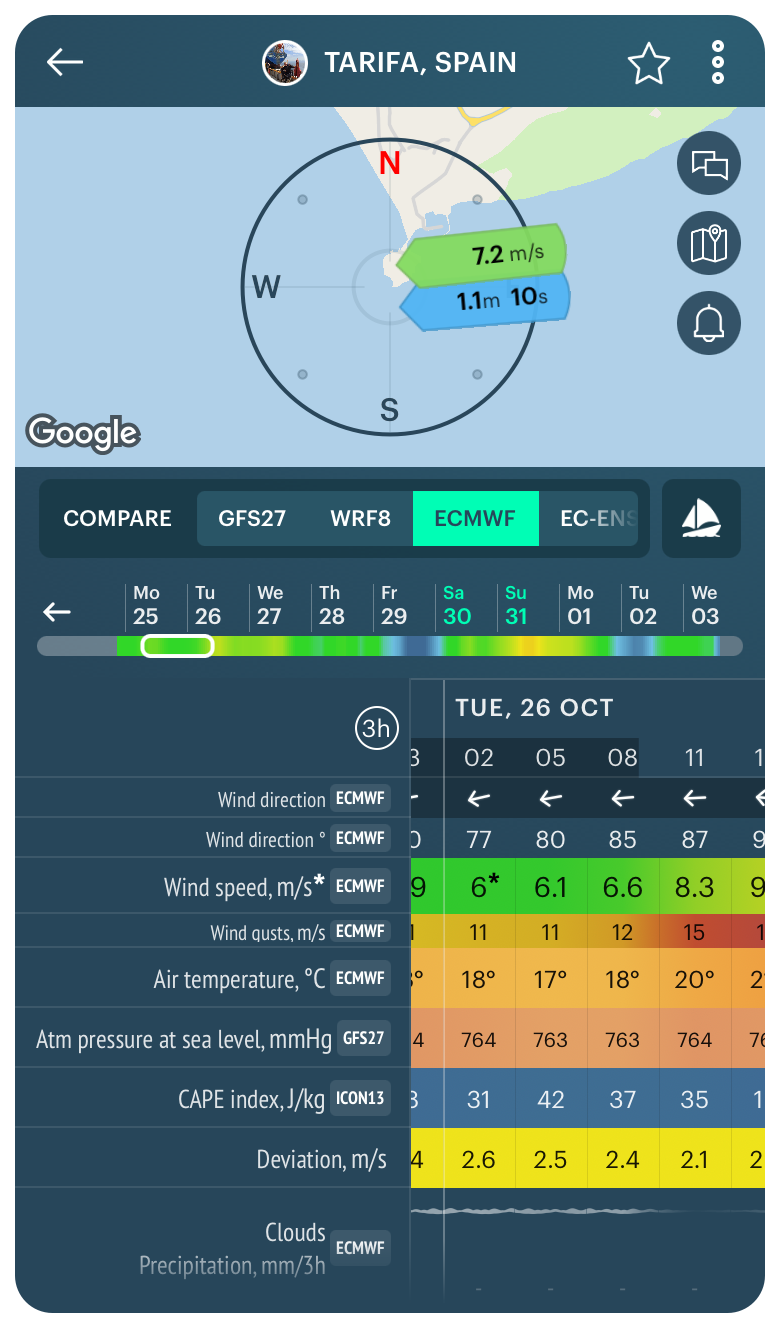 Weather forecast for Tarifa, Spain, in the Windy.app for iOS

Weather History is a special section describing the weather on Earth over the past 9 years (2020–2012) to the exact day for several weather parameters. This is not climate data in the literal sense, except the Wind Archive on the Weather Map, where you can find out the average wind values by month for the same period, but the Weather History can be used as a visual presentation of climate patterns you can try to calculate on your own. 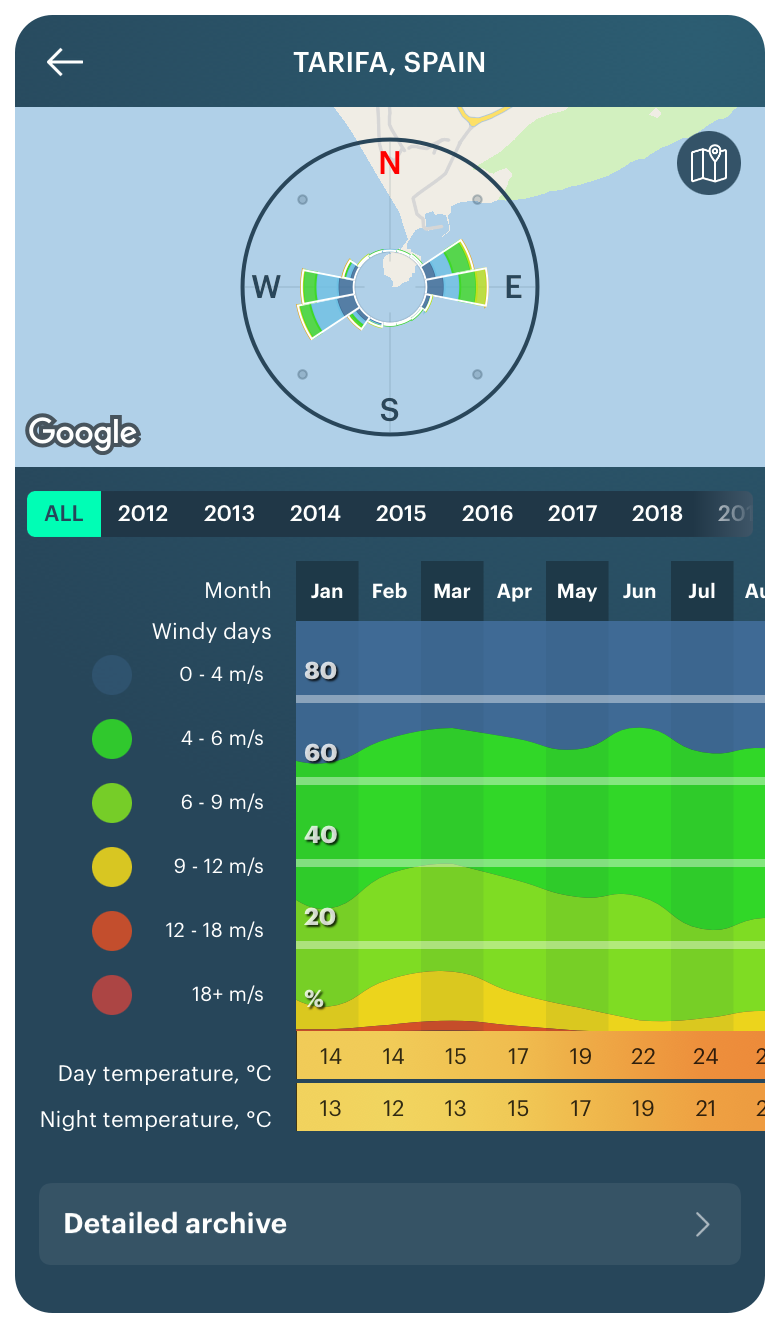 Weather history for Tarifa, Spain, in the Windy.app for iOS 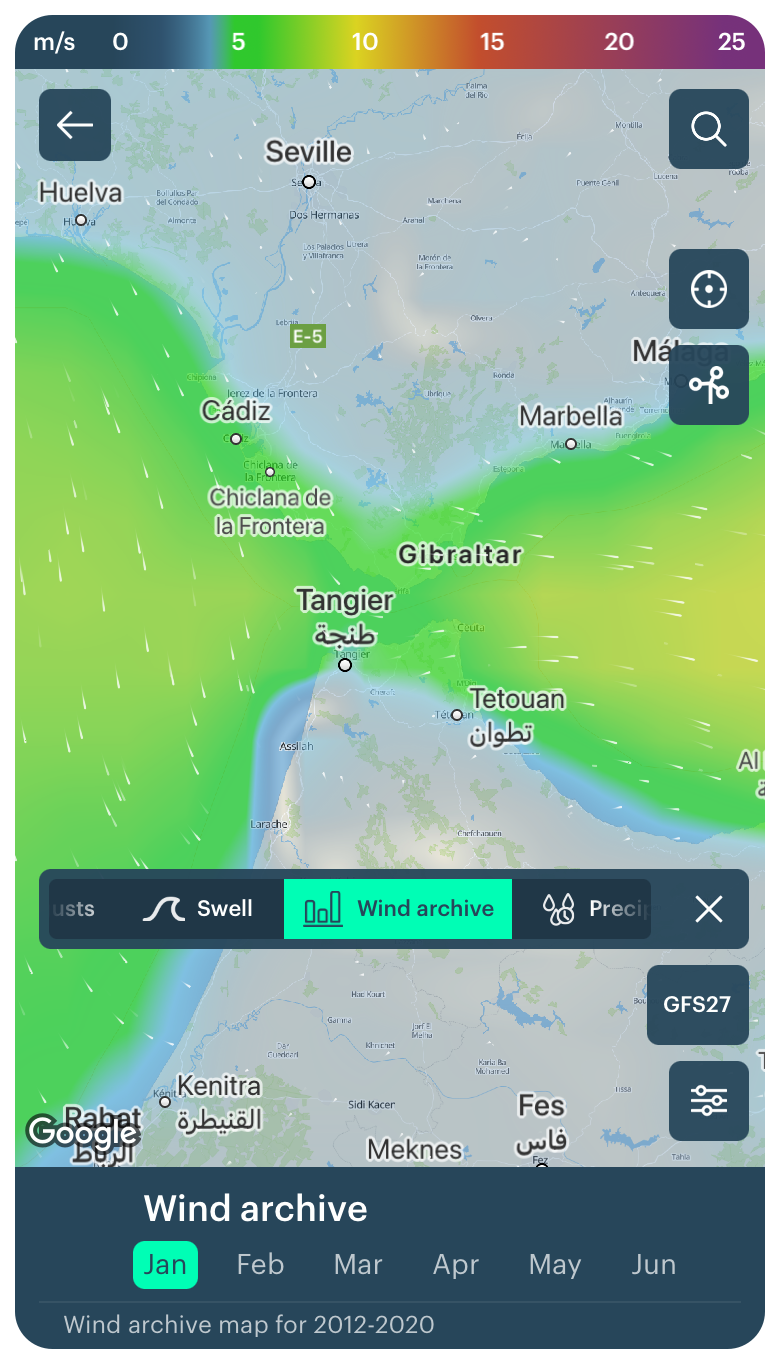 Wind history (wind archive) for Gibraltar region, in the Windy.app for iOS

The app also has information about the best seasons for particular activity on specific spots. To find it out, open the Spot Info section of the application. For example, the best time for kitesurfing and windsurfing in Tarifa is considered from January to October. The information from the app is duplicated on this website, which also has a selection of best spots and seasons to practice sport on them and other blog content. 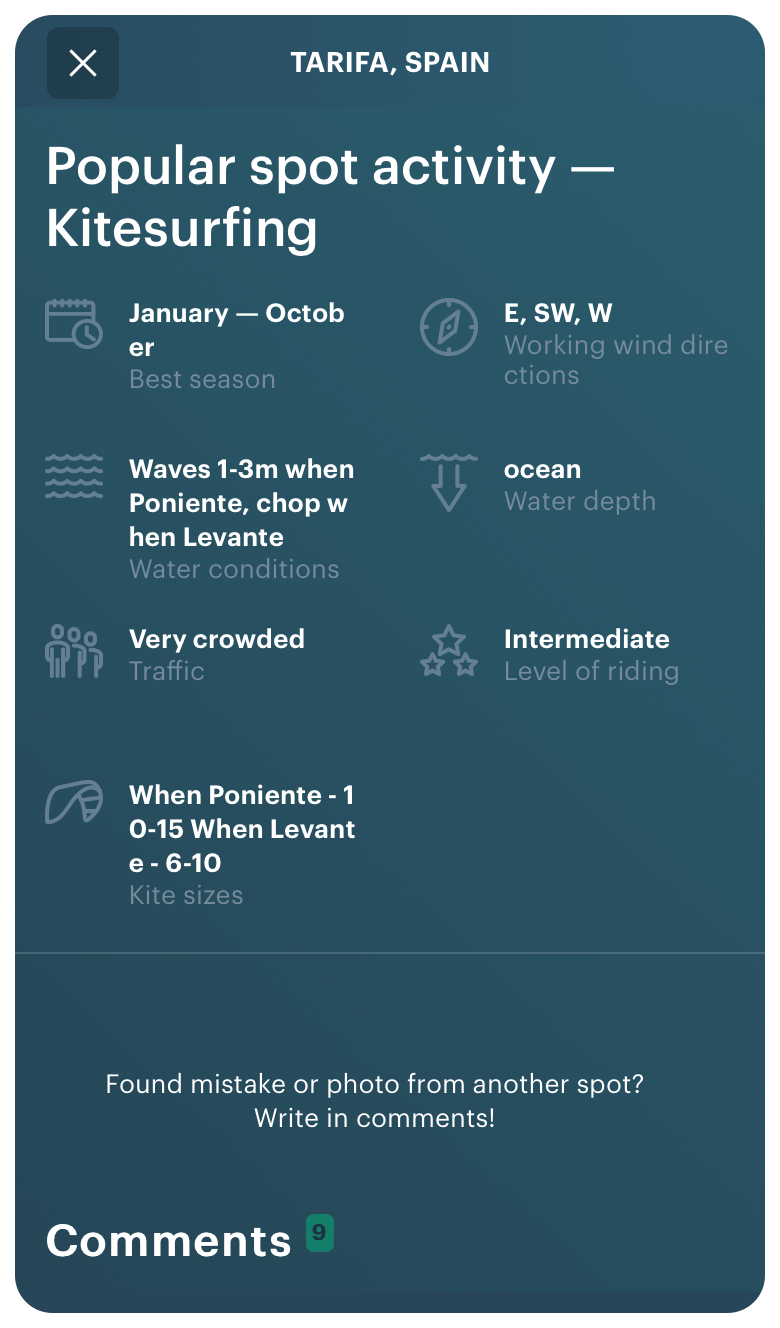 Spot information for Tarifa, Spain, in the Windy.app for iOS

How to read isotherms shown on climate maps

The Basic Meteorology for Windsports and Outdoors. Windy.app textbook for better weather forecasting

How to read a weather map like an expert. Wind, precipitation, fronts, and more