How to read contour lines on weather maps. A brief manual

In the past two posts, we learned the definition and an interesting history of invention of isolines, as well as the basic types of such lines we can see on weather and other maps.

In this one, we will learn how to read contour lines to quickly get the information you need. Generally speaking, it is very simple because the principle of reading them is the same for all types of isolines.

First, pay attention to the location of the contour lines

Again, the easiest way to understand this is to look at a map of terrain: a lot of isolines close to each other on a map means that it is a high mountain with a steep slope. Conversely, lines far apart indicate a gentle slope.

For example, in the Windy.app, on the time of publishing of this manua, north of Halifax, Nova Scotia, Canada, we see a large area of low pressure (L) and many isobar lines around it that are very close to each other: 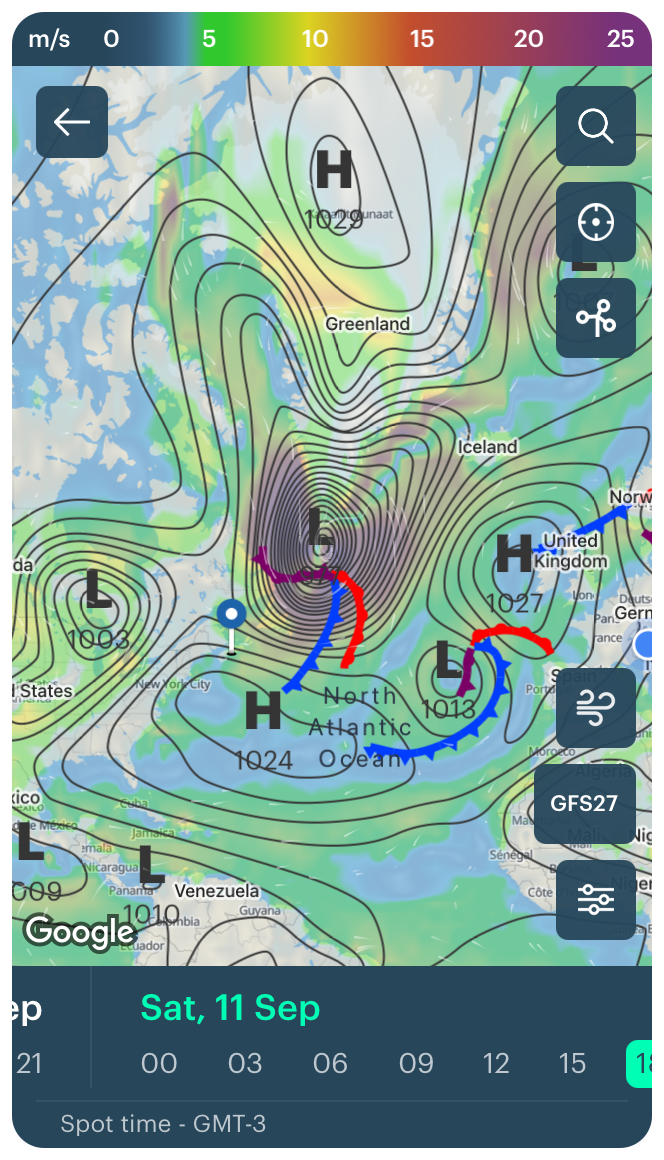 The types of isolines you see on a map are also important for reading different values and are designed to help you read the map faster and better. Lines can vary in type, thickness, and color, which means one thing or another depending on the map: 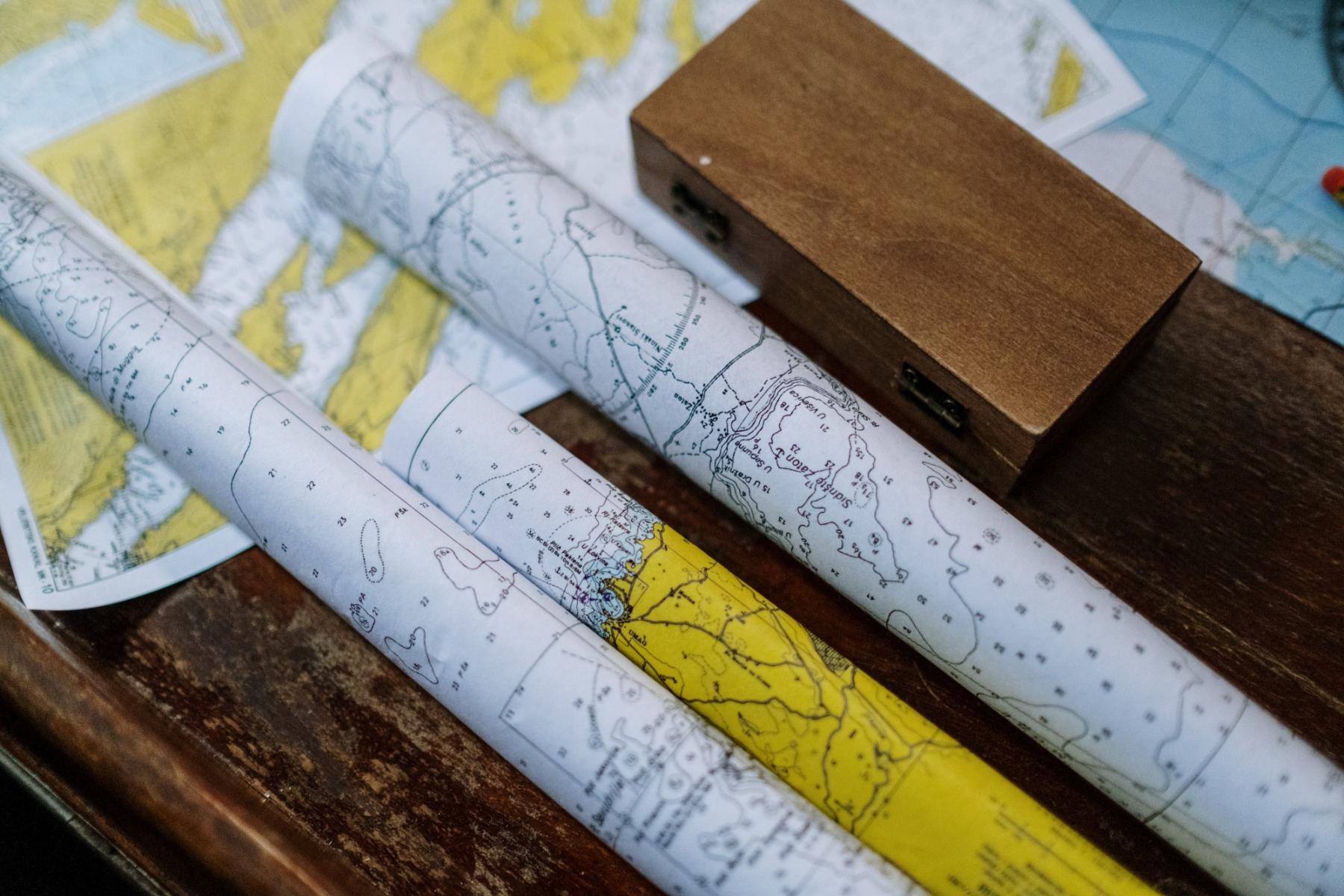 Third, find the numbers on the contour lines map

The exact values of parameters are usually indicated by figures with a certain interval: 10, 20, 30... and so on. This is also called the “map scale”. For example:

The units of measurement differ depending on the parameter and the region where it is commonly used: for wind, it is meters per second, for temperature it is Celsius, etc. — the same as in a normal weather forecast.

The location of the numbers itself also matters. Usually, on topographic maps, the top of the numbers point up the slope of the terrain and the bottom point down.

By zooming the same map in the Windy.app, we can see the exact pressure values for the same area north to Halifax outdoor spot in Nova Scotia, Canada: 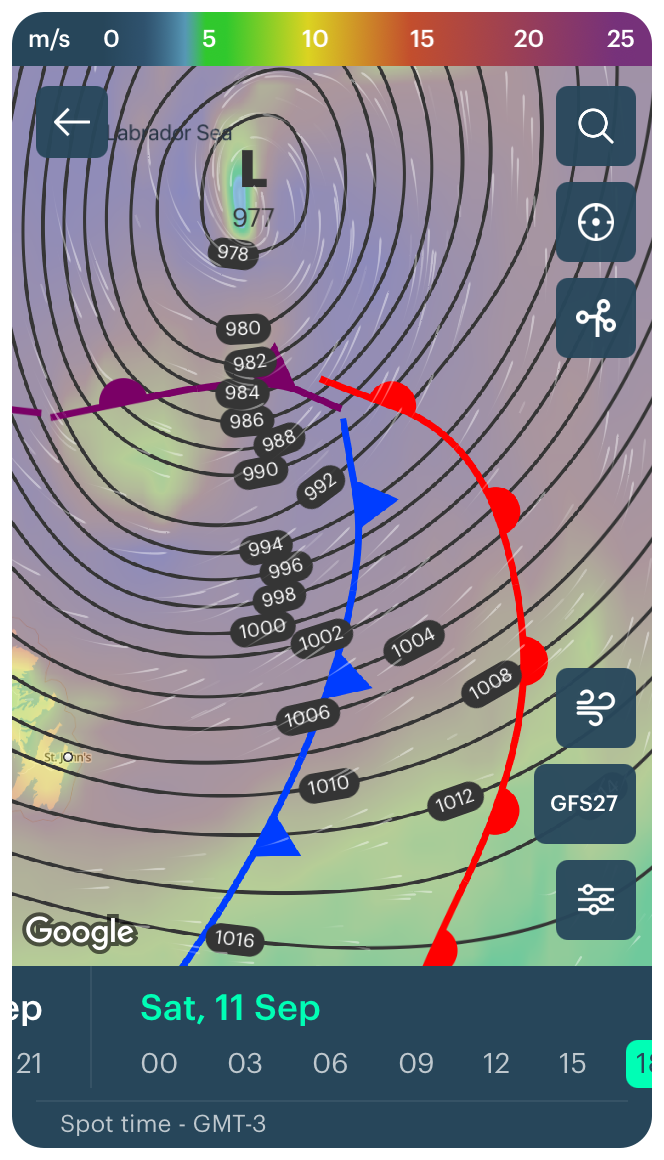 This also tells you that there is a very strong wind here, as evidenced by the color of this area on the map — it is almost purple.

Look at the color scale at the top — the winds are from 20 to 25 meters per second (44.7 miles per hour). This also means a strong / severe gale on the Beaufort scale with high waves of 7–10 m (23–32 ft) at sea, crests roll over. Foam is blown along the wind direction. Large amounts of spray may reduce visibility. On land, roof tiles are blown off buildings.

Fourth, look at the specific colors of the contour lines map

To get an even better selection of isoline values on a map, the spaces between a group of lines with the same value may be indicated in a certain color. So you can see in what parts of the terrain will be higher temperature, pressure, or the slope.

On topographic maps, traditionally, different shades of green are used to color lowland terrain, brown — for mountains, white — for glaciers, and so on.

Higher temperatures, wind speeds, or accumulated precipitation are indicated by red as opposed to blue and green for lower values.

However, a map with sea depth isolines will likely be different shades of blue, where dark blue indicates the great depth and blue indicates little concerning each other.