The current is the movement of water masses in reservoirs. In this new lesson of the Windy.app Meteorological Textbook (WMT) and newsletter for better weather forecasting you will learn more how density currents work.

In one of our previous letters we found out where the currents on the surface of the ocean come from. Briefly, surface currents are originally created by the wind. The movement of air drives the water, i.e. the blowing wind draws the water away with it. The current is the movement of water.

If winds in the atmosphere are directed towards each other, then water flows from both sides to the area where they "collide". In this area, a surplus of water is formed and then 'displaced' to other parts of the ocean.

Wind thus triggers a second mechanism for the formation of surface currents, the displacement of water surplus from one area of the ocean to another.

But wind can only drive the upper layers of water. At great depths, water movement is often caused by another force — created by the difference in water density. What is it exactly?

Imagine water as a collection of a huge number of molecules. The closer the water particles are to each other and the more of them are placed in 1 cubic meter of water, the higher the density is. 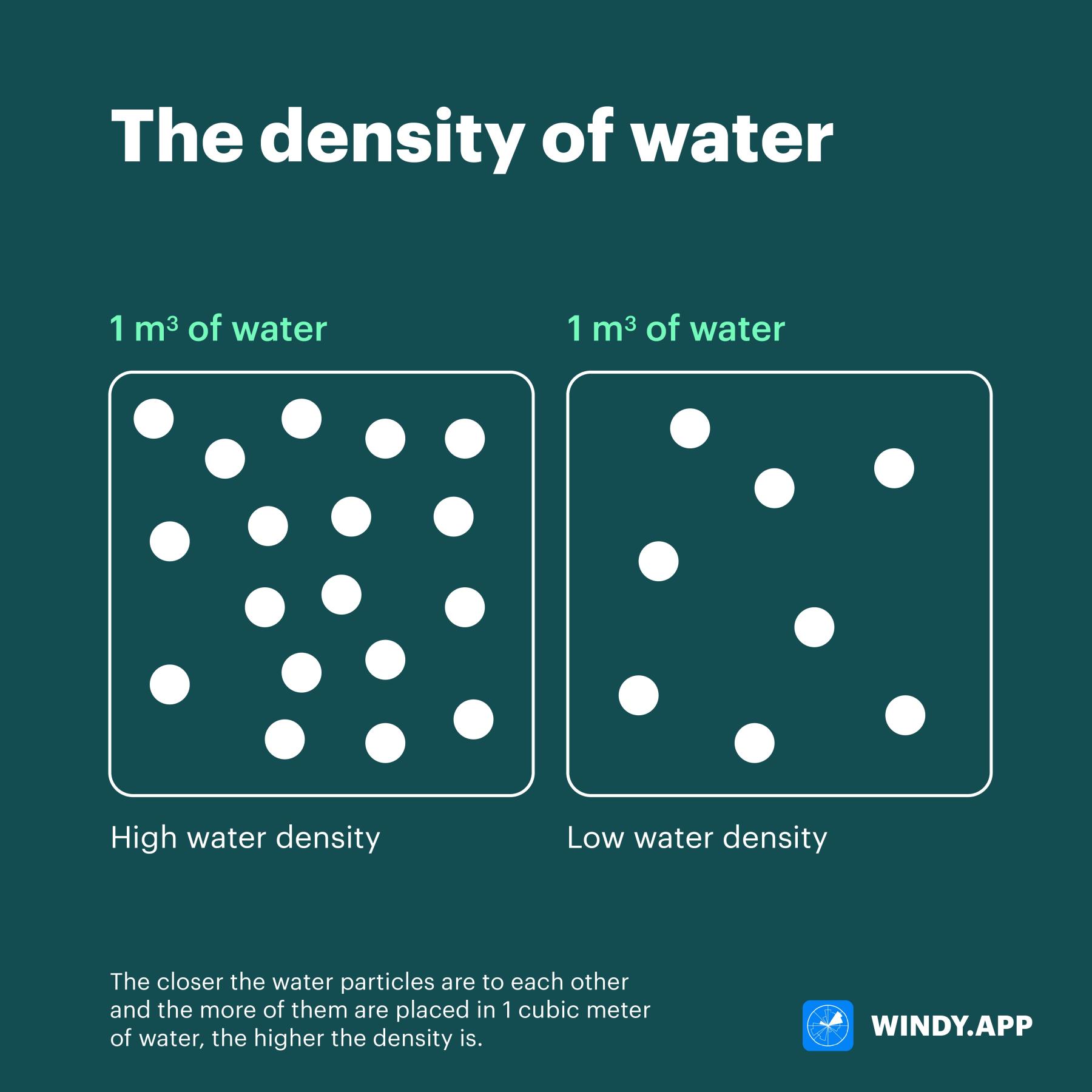 The density of water depends on temperature, salinity and pressure at depth. 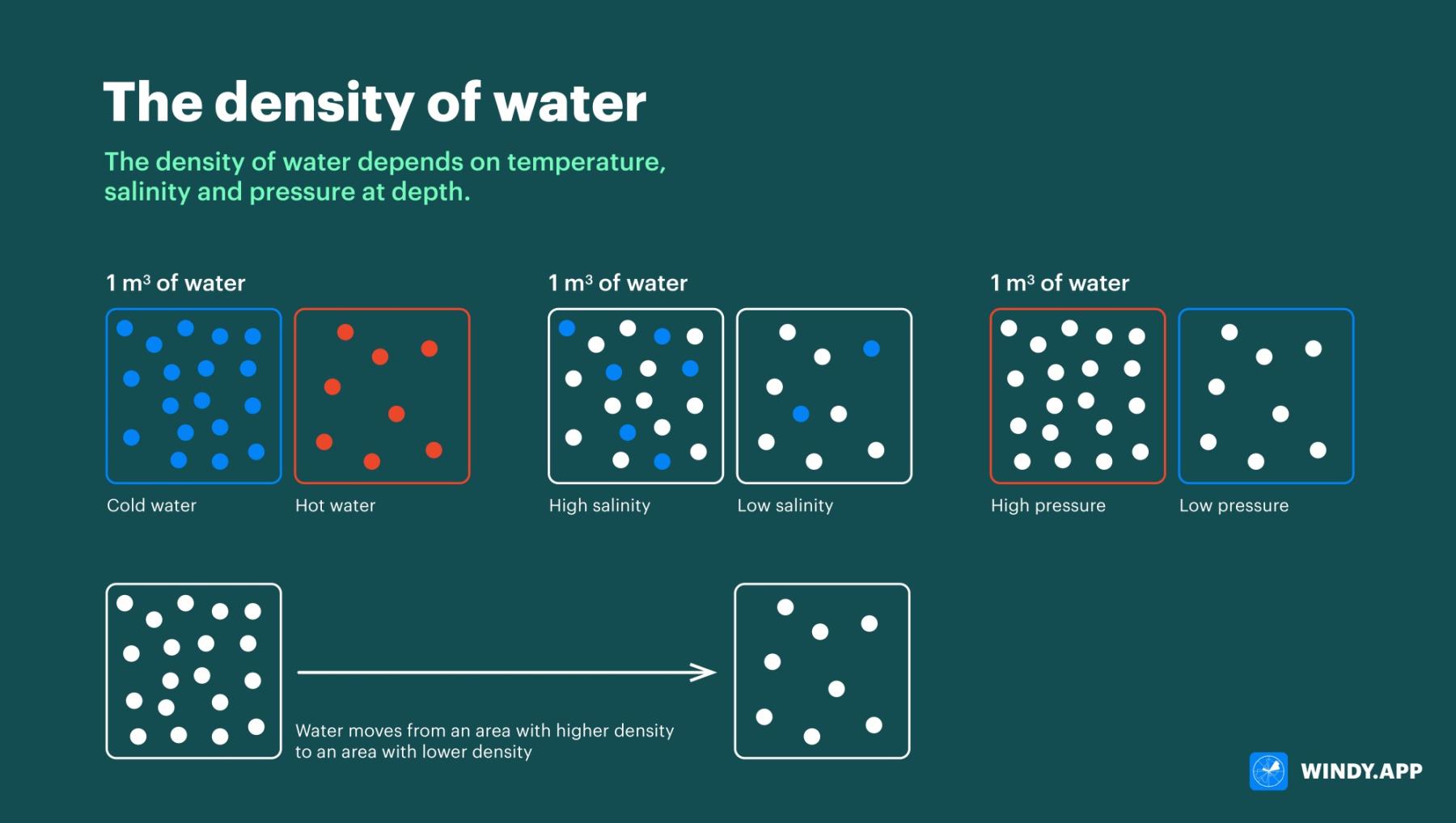 Any system seeks balance. Particles from a 'crowded' area move to an area where there are fewer particles. This is how water moves from an area with higher density to an area with lower density. And that's why density currents appear.

On our planet such currents often occur on the borders of different bodies of water, because that is where the temperature and salinity of water differ most.

A striking example of such currents is on the border of the Red Sea and the Gulf of Aden connected by the Bab el-Mandeb Strait.

The Red Sea is the saltiest in the World Ocean. Here's why: there are no sources of fresh water in the Red Sea in the form of rivers (no river flows there!) and there is very little precipitation. But there is strong evaporation, i.e. water particles are removed and salt particles remain in the sea — this increases salinity.

One litre of Red Sea water contains 41 grams of different salts (the average salinity in the ocean is around 34 grams/litre and in the Gulf of Aden around 35-36 grams/litre).

Therefore, in the Bab el-Mandeb Strait at some depth, there is a current coming out of the saltier Red Sea and entering the less salty Gulf of Aden.

Also in the Red Sea, due to the lack of water inflow (no rivers and precipitation, but evaporation), there is a shortage of water and this is compensated by the surface current from the Gulf of Aden. That is, in the Bab El Mandeb Strait, there are two opposite currents simultaneously. 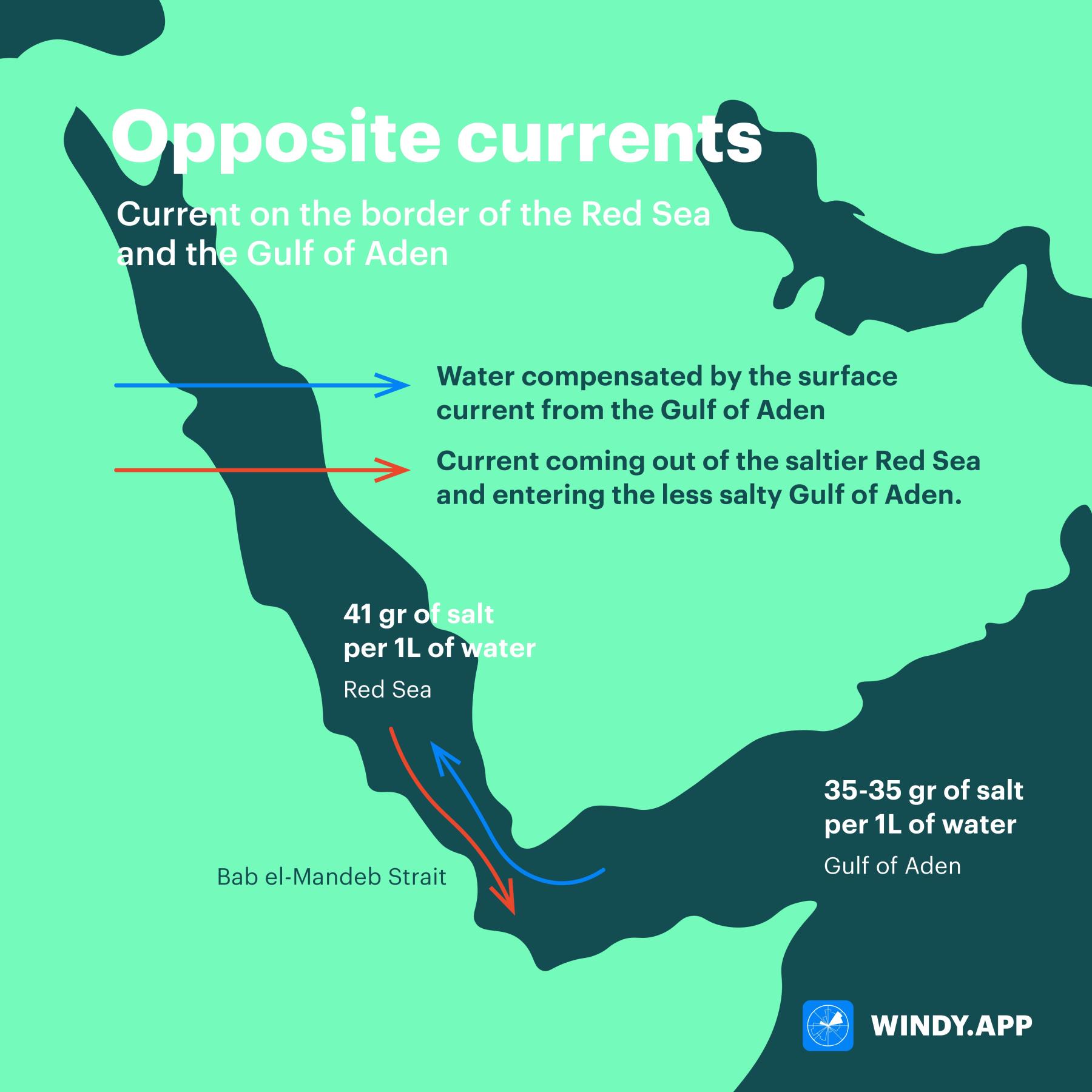