What happened. Flood in Venice in 2019

What is Acqua alta

«Acqua alta» is the term used to describe tidal peaks in the northern Adriatic Sea. The highest tides are registered in the Venetian Lagoon and consequently lead to the partial flooding of Venice.

October to January is the high water season. During this time Venice gives the impression of sinking.

The city can withstand the rise of water up to 1 m above sea level. However, when the water rises to 2 meters or more, the streets of Venice go underwater. 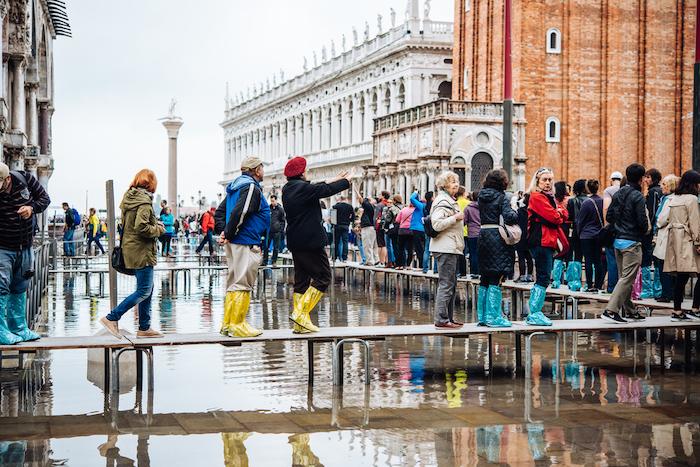 Why is  Venice flooded

There are 7 main reasons for floods in Venice:

The primary cause of tide formation is the gravity of Earth and that of the Moon. This leads to a peculiar hump and a wave forms on the water.

The second cause is the rotation of the Earth, a wave formed by the gravity pull of the Moon or the Sun changes its position relative to the globe. The wave follows the Moon, while the Earth continues to spin. This affects the constant movement of the water hump, which causes tides.

The good thing is that tides can be predicted years in advance.

Tides are amplified by a phenomenon such as seiche. A seiche is a standing wave in an enclosed or partially enclosed body of water. You can watch this phenomenon in your own bath. If you excite the water, then the wave begins to run back and forth. Seiches have been observed in the Adriatic Sea.

Moreover, the "Oil Channel" was built through the lagoon to allow oil tankers to reach the piers. It created new direct connection to the sea, so the city is more affected by severe high tides.

On November 4, 1966, high tides, three days of heavy rain and sirocco wind caused the water in the canals to rise to a mark of 194 cm. It was the worst flood in the history of  Venice.

Thousands of citizens were trapped in their homes for days. Artworks valued at a total of $6b perished.