How does the Earth's magnetic field work

In fact, the earth is a very large magnet. In this new lesson of the Windy.app Meteorological Textbook (WMT) and newsletter for better weather forecasting you will learn more about Earth's magnetic field and how it works.

It's all about the lone electrons

All matter, including ourselves, is made up of tiny particles — atoms. Atoms, in turn, have electrons — even smaller particles on whose movement everything to do with electricity depends. And where there is movement of electrons, there are always magnets.

The difficulty is that scientists don’t know yet what a magnetic field is. That is, we know that it exists and we can register it. But what it is and what particles transmit its effect is not yet known.

What do we know?

In the theory of relativity, one observer can even see an electric field and another can see a magnetic field, that is, they are fundamentally complementary. Therefore, they are combined into a single force — electromagnetism.

Electrons move constantly inside the atom. And as they move, they create a magnetic field. If electrons move constantly in atoms, then why aren’t all substances magnetic? Because usually electrons around atoms «fly» in pairs — one in either direction, suppressing each other’s magnetic properties. But atoms of iron, cobalt, nickel, and some other substances have electrons without a pair, with no one to suppress their magnetic field. Such lone electrons also turn the atom itself into a magnet. It is important to remember that any magnet has two poles, which are called north and south.

The Earth is a magnet

That’s right — the Earth also has a magnetic field with poles, which, however, are slightly away from the geographical, “real” poles of the planet. And the field looks approximately the same from afar as the field of an ordinary red-blue magnet. 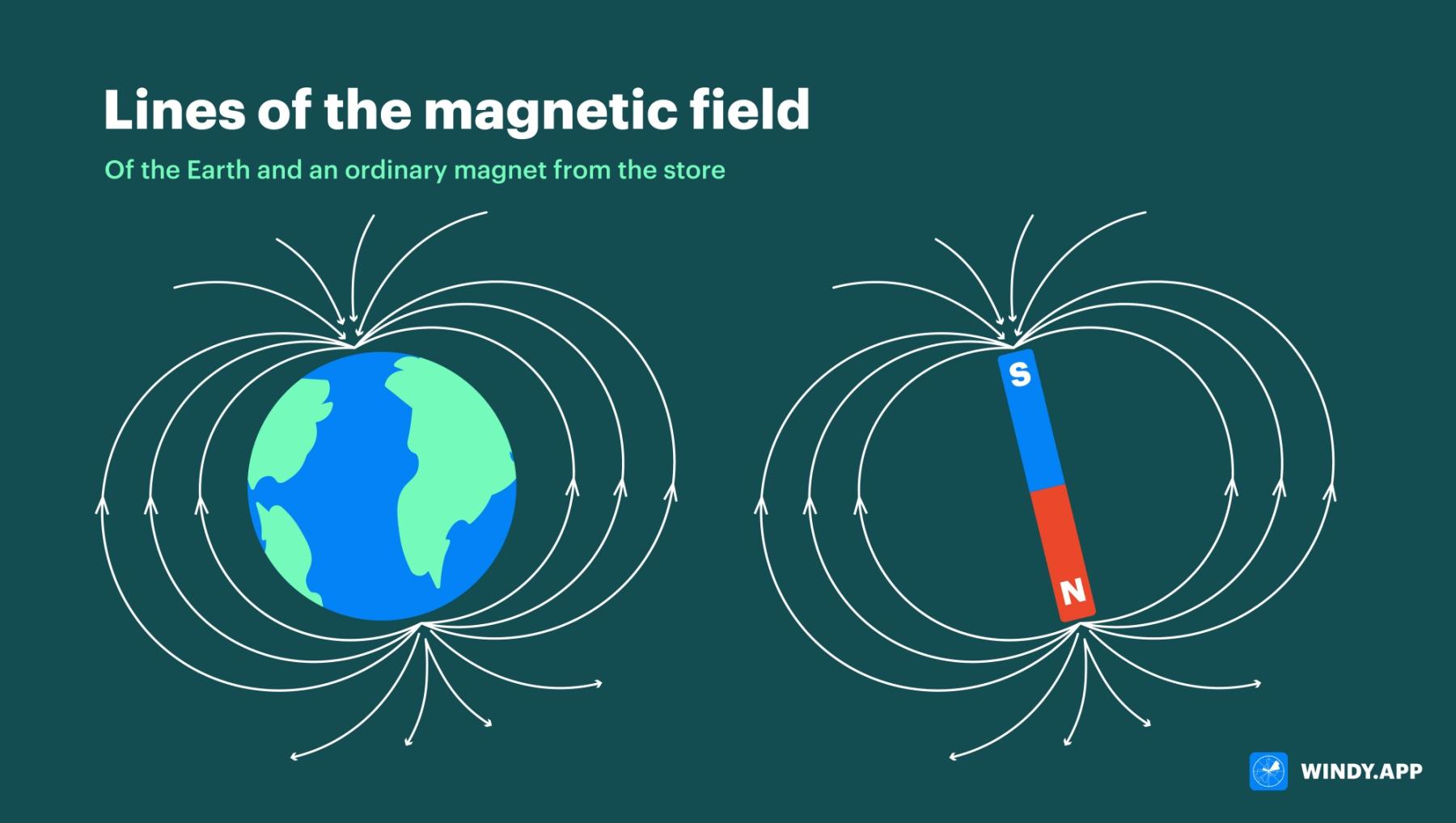 Lines of the magnetic field of the Earth and an ordinary magnet from the store. Illustration: Valerya Milovanova / Windy.app

The compass and the Earth's real poles

But every compass has a secret. Compasses for the Northern Hemisphere, for example, where the red arrow should point north, in fact, absolutely always point to the magnetic south of the Earth!

Confused? That’s why they came up with such a rule.

So, why does the Earth have a magnetic field?

If you thought there’s probably a big lump of iron in the center of the planet,’ you’re right. But this is a very incomplete picture.

We recall that at three thousand kilometers under the ground the core of the planet begins. In size, it can be compared to Mars, but in fact, the core consists of two parts — an external liquid core and a solid inner core. The inner core is really a lump of pure iron, but its magnetic properties are insufficient to provide that powerful and mobile magnetic field that the Earth has.

The main actor here is the outer, liquid part of the core, which also mainly consists of iron. Because of the rotation of the Earth, the substance there is in constant motion — it rotates around the center of the planet. And because it is a liquid, different velocities are possible there: the closer to the center, the faster the matter moves.

Remember at the beginning of the article we emphasized that magnetic fields are always where electrons move? This is also very important for processes in the Earth’s core, because liquid iron serves as an excellent conductor — an environment for the movement of electrons.

Say, in the process of formation, the Earth got a very weak magnetic field just from having iron inside the core. The solid core began to cool gradually, and streams of hot matter began to rise from the core upwards, towards the mantle. And from above, from the mantle to the core, streams of cooler matter began to descend. Exactly like in the atmosphere, where warm air always tends upwards, as it is less dense, and cold air, being heavier, moves downwards.

But the Earth rotates — so does the matter in the liquid core, and at different speeds. Therefore, these flows swirl, i.e. there is additional motion.

As a result of all this motion, iron atoms are constantly ’rubbing’ against each other, exchanging electrons. And the more the electrons move, the more new magnetic fields are born, which at the right angle can join at the poles and reinforce each other.

All these fields are bound to the flows of the substance, so they revolve around the center of the Earth along with the liquid iron. And because they are constantly inside the lines of the weaker, ’original’ magnetic field of the Earth, they are able to ’drag’ and amplify its lines.

It is not easy to show what happens to the magnetic field lines in the core - usually, you get something like spaghetti stuck together in a pot

As a result, the magnetic field spontaneously increases to the maximum possible at the moment. The term dynamo effect has been coined for this process. The dynamo itself does not create the Earth’s magnetic field, but strengthens and maintains the existing one.

Life on a magnet

This, of course, is a simplified picture, in detail everything looks quite complicated — even Albert Einstein at first refused to believe that there is such chaos in the center of the Earth. But the discoveries of the 20th century suggest that earthlings really have to thank the dynamo effect, which began spontaneously billions of years ago, for such a powerful magnetic field, rather than anything else.

Why should we be grateful? The fact is that the magnetic field protects life on Earth from the most dangerous particles from space, in particular, from the most harmful part of solar radiation.

Such particles, getting into the lines of our magnetic field, are forced to move along its lines — that is, to deviate from the route and either fly around the Earth by the side, or fly to the poles of the Earth and become part of the aurora borealis. If the Earth’s field had been weaker, radiation would not only have killed our ancestors — life on the planet would not have been possible at all.

Not all planets are so lucky — on Mars, apparently, the dynamo ceased long ago. Without the dynamo, there is no strong magnetic field either. As a result, solar radiation has been blowing the planet’s atmosphere into open space for billions of years, and its surface looks like a desert after a nuclear war.

At the same time, the Earth’s magnetic field structure has other consequences — due to the high mobility of the liquid core, the magnetic field itself is mobile and variable. Besides magnetic anomalies — places with a weaker or stronger magnetic field, it is known, for example, that the north magnetic pole of the Earth is gradually shifting towards Siberia. And in the past of the planet, there were at least 183 changes of magnetic poles — when the magnetic north spontaneously became the south and vice versa! But it is already a subject for another newsletter.

What Is The Dust Storm And How Does It Work?

Are Thunderstorms Dangerous For Flying?