Today we are going to talk about the solunar theory, a fascinating phenomenon that lies between science and fiction.

The solunar theory has become the foundation for a lunar calendar for fishermen and hunters which postulates that animal activity depends on the phases of the Moon. Allegedly, it is possible to predict good hunting and fishing and you plan them in advance for the most “favorable” days, depending on the Moon phase.

Sounds intriguing, doesn’t it? So, let’s try to figure out if this is true, what is solunar, and learn how the solunar theory managed to gain the trust of people around the world.

How was the solunar theory laid out?

Back in 1926, Dr. John Alden Knight proposed a scientific theory which was based on years of observations of fishing and hunting. According to Dr. Knight, people always noticed that periods of a full or new moon tend to be the best for hunters and fishermen. He conducted a statistical analysis of successful cases of hunting and fishing, trying to establish common features of successful and unsuccessful cases. The results were quite astonishing: the quality of hunting and fishing can be determined by a few variables: the time of sunrises and sunsets, Moon phases and tides. Subsequently, other scientists have been trying to study and refine the solunar theory.

So far, so good but what are the Moon phases?

We all know that the Moon orbits the Earth, and the Earth goes around the Sun. The Moon doesn’t produce its own light, it only reflects sunlight. Therefore, how we see the moonlight depends on the relative position of the three celestial bodies.

When the Sun and Moon face the Earth from the same side, the Sun illuminates the side of the Moon that we cannot see. For us, the Moon looks dark and we usually call this phase a “new moon”. As the Moon orbits the Earth, the Moon begins to “grow”, becoming more visible. This is called the crescent phase because of a thin crescent we see as the side of the Moon visible to us gets illuminated. When the Earth is between the Sun and the Moon, we can see the Moon completely illuminated, this phase is called full moon. Then the Moon begins to wane, going back to the new moon. It takes 29.5 days for the Moon to orbit Earth, so the Moon’s cycle is 29.5 days long.

How do Moon phases affect our life?

Naturally, the first thing that springs to mind is the level of light at night. During a full moon, it becomes the dominant light source in the night sky. Most hunting and fishing enthusiasts know that some animals become more or less active, depending on light at night.

Sky brightness at night, however, is totally dependent on the moon only if the sky is clear. Clouds drastically change the level of brightness of the night sky. They can cover the full moon, and a bright night will become pitch-black. Clouds can also enhance brightness at night due to the reflection of light. Clear nights in winter become much lighter as the snow reflects the light. So, if you are going fishing or hunting at night, take into account the weather forecast and the Moon phase.

Are the Moon phases just about light?

There are other implications, of course. It’s common knowledge that ocean tides are caused by the Moon’s gravitational pull. However, in this case the daily rotation of the Earth on its axis comes to the fore. High tides are seen when the moon is directly overhead at any point on the Earth. There are low tides in parts of the planet perpendicular to the Moon.

But Moon phases can also affect tides. If the Sun, Earth and Moon arrange themselves more or less along a line (around each full moon and new moon), then the usual daily tides increase slightly. When the Sun and Moon are perpendicular to each other (exactly half of the Moon is visible in the sky then), the tides weaken.

Since the activity of many species living in coastal areas is affected by tides, these changes can affect fishing. However, it is worth pointing out that the main tidal cycle is diurnal. The phase of the moon can only strengthen or weaken it.

There are no tides in rivers, lakes and other water bodies that are not connected to the sea, so the Moon phase affects their species much less.

And how does the solunar theory explain the influence of the Moon phase on marine and land animals?

The phase of the Moon is said to affect them by the very fact of its existence, which has nothing to do with light. Several convincing experiments have been carried out to prove this, including one with some live oysters, which open their shells with each high tide, that is, twice a day: when the Moon is directly over some area and when it is on the opposite side of the Earth from it. There are two low tides in a day, too.

The oysters were put in aquariums with no tides and no light. Oysters continued opening the shells twice a day. Actually, they were moved to a different time zone for the experiment. At first they opened the shells at the same time as before, that is, when the high tide was coming in their home time zone. But after a while, they began to open the shells at the time at which the high tide was supposed to occur in their new time zone. So they understood that the tides should now be at a different time, and they rearranged themselves without even a direct connection to the outside world. This experiment has proved that the Moon directly influences living organisms.

What’s wrong with the solunar theory?

One of the most useful properties of any scientific theory is its evidence base. No one questions the fact that the quality of hunting and fishing is affected by sunrise and sunset, the level of night lighting and the tides in seas and oceans. It’s no secret that fish bite better at dawn, and that marine animals are most active during high tides. These relationships are substantiated from the point of view of physiology and the life cycle of animals, and have been known since ancient times.

There are many correct observations and brilliant ideas in the solunar theory, but the most important element of it, regarding the direct influence of Moon phases on animals, is yet to be proven. On the one hand, it is argued that there is an influence, but no one can explain why it exists and how exactly it happens. On the other hand, no one has disproved this yet. Therefore, the solunar theory can be used on a regular basis, and if you remember the principles behind it, you can do it even more efficiently.

Where to get solunar forecast?

In the Windy.app, there are two special weather profiles — Fish and Fish Pro — with a ready set of weather parameters important for fishing: wind direction and speed, atmospheric pressure, air temperature, and, of course, solunar, whether you believe in it or not.

The solunar is also presented on a special chart, which conveniently tells how good biting will be in a particular place at a particular time in the morning, afternoon, evening, and night — and so on for the next 10 days.

To activate solunar, tap on weather profile icon right to the weather forecast models under the map on the spot screen. 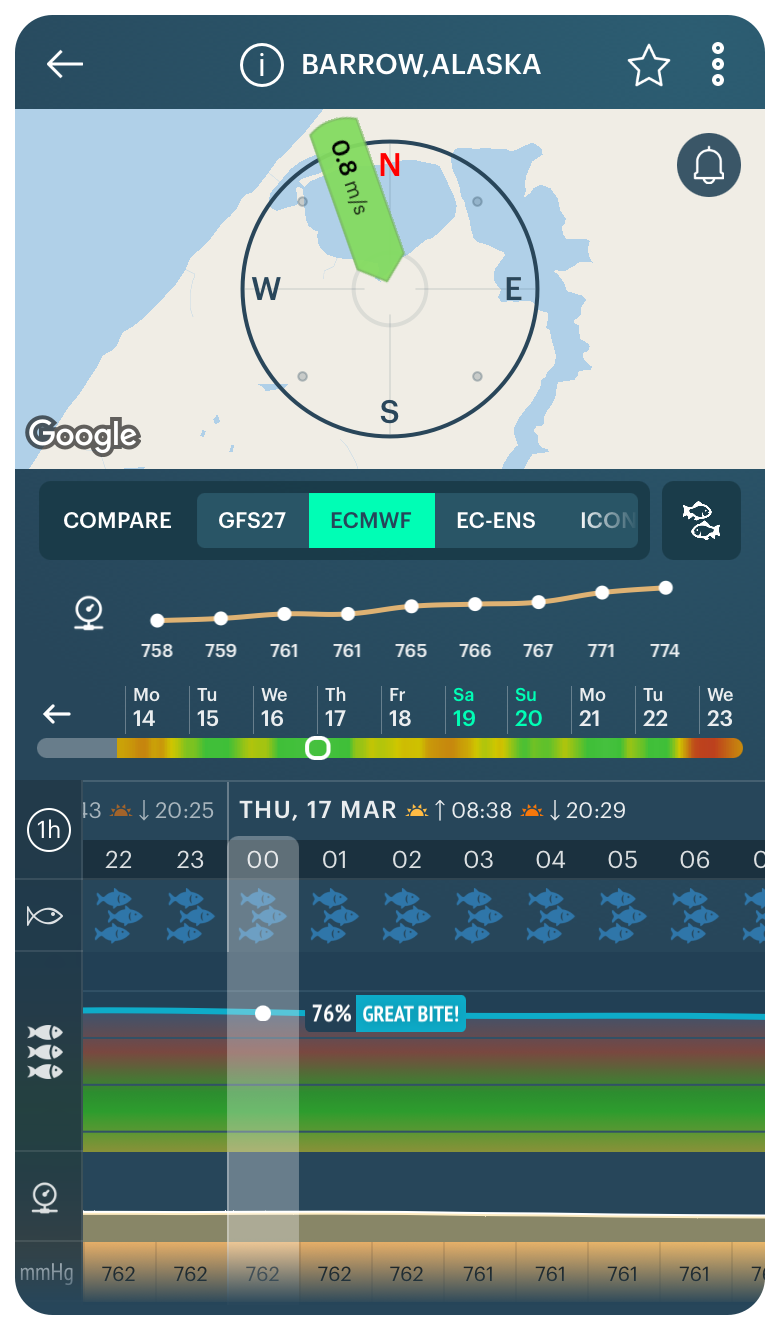 Fish Pro weather profile with Solunar feature in the Windy.app for iOS

Text: Evgeniy Petrov, a meteorologist with several years of professional experience from Moscow, Russia. He has a Master’s degree from the Faculty of Geography of Lomonosov Moscow State University(MSU) in Meteorology and Climatology.

Why is the sky blue? Simple explanation

Why do we see a circle around the sun? Halo's simple explanation