Take part in the Copa del Rey MAPFRE — one of the best Mediterranean regattas in Mallorca, Spain

The Copa del Rey MAPFRE is a must-attend sailing regatta for all yachting enthusiasts from Spain and Europe, although it attracts competitors from all over the world. It has been supported by the Spanish royal family for 40 years. In this article we will explain what the Copa del Rey MAPFRE is and how to participate in it as part of our new regular column in the blog that covers the world's largest and most popular amateur sportive events.

What is Copa del Rey MAPFRE?

Copa del Rey MAPFRE is one of the largest amateur sailing regattas in the Mediterranean Sea, which is held in the Bay of Palma de Mallorca on the Mallorca Island of the Balearic Islands in Spain. In English, the name translates as the Kings' Cup.

Important: don't confuse it with the other Copa del Rey, the annual Spanish Soccer Cup. The word MAPFRE (Mutualidad de la Agrupación de Propietarios de Fincas Rústicas de España — Mutual Insurance Company of the Spanish Farm Owners Association) in the name of the yachting competition is the largest insurance company in Spain and Latin America, which is its title sponsor. Supporting the sailing regatta, it also helps to distinguish one sporting event from another.

The Copa del Rey sailing competitions have been held annually since 1982 at the end of July and the beginning of August. Competitions in 2022, which will be held from July 30 to August 6, will be the 40th anniversary of the regatta.

Over a 40-year history, the regatta has gained the status as one of the most prestigious in Europe. For example, in 2012 the award ceremony was led by Prince Felipe, and only two years later he participated in competitions as king of Spain. Other members of the royal nobility also participated in the regatta.

From the very beginning, the organizers of the regatta, the yacht club Real Club Náutico de Palma (RCNP) and the National Cruisers Association (Asociación Nacional de Cruceros) began with a good start: more than 50 yachts took part in the Cup, and the OIR handicap system was used for calculating the results (mathematical system of equalizing the time of the course by vessels of different size and materiel used in yachting).

In the next regattas, the measurement was carried out by different systems (IOR, IMS), until in 2009–2011 they switched to the widely used today IRC and ORC, combining also races in monofleets.

For the first two seasons, the regatta was united with the International Mediterranean Championship (Campeonato Internacional del Mediterráneo). The main goal of the following years was a significant increase in the fleet, at least 100 yachts, with most of them being foreigners.

By 1990 it was achieved by attracting maxi-yachts and including events into the global and continental regatta calendar.

Every year, in addition to the regatta itself, there is a rich coastal program, which is full of different evening events: the official opening and closing ceremonies of the regatta with the direct participation of the King and confidants, daily awards for the winners of the day, and grand parties.

Organizers of the regatta, the El Real Club Náutico de Palma, successfully gather participants of America’s Cup, Olympic medalists, and other world's best sailors as well as hundreds of sailing lovers together. Today the best yachtsmen in the world are seeking to win a trophy in the form of a burning flame. Multiple winners of the competition were "Caixa Galicia", "Aifos", "Rats on Fire", "Bribon", "Nationale Nederlanden", and others.

The Spanish King’s Cup is generally played for six days, five of which include short-course racing in the Olympic loop and one day includes a coastal race of 30 miles. So these are the two main race formats of the regatta.

However, every year the yachting divisions of the regatta change. For example, in 2019 more than 130 participants in 11 divisions started the regatta: five of them were handicap (ORC 0, ORC 1, ORC 2, ORC 3, Mallorca Sotheby's IRC), and the remaining six were monofleets (GC32, J80, ClubSwan 42 and 50, Swan 45), whose results were assessed on arrival at the finish.

A race marathon is an independent event, but, as originally, it is included in the calendars of the GC32 Racing Tour 2019, the Nations Trophy Mediterranean League for Classes Club Swan 50, Swan 45, and Club Swan 42.

How to participate in Copa del Rey MAPFRE?

The procedure for participating in the Copa del Rey MAPFRE is simple.

First, you must, of course, have a boat in one of the classes that are allowed in each particular edition of the regatta, as well as a captain and crew, unless you intend to sail your own vessel.

Next, you need to fill a registration form in the Entries section of the official website with a number of questions, including who and where you are from, an accurate and complete list of your boat and crew specifications, payment details, and a few other blocks of information.

Questionnaires must be sent in by a certain deadline. It can vary from year to year, but usually, it's a few months before the regatta. In 2018, for example, the deadline was June 1.

According to the website, "after filling in the entry form, you must accept and check the legal condition box" and pay for participation.

The cost depends on the class of the boat and can also vary from year to year. For example, in 2018, for the following groups of yachts, the cost of participation was if you paid by June 1:

After receiving the application, the organizers of the regatta will contact you. Also, each owner or skipper must personally register and sign the Registration Form in the Race Office at the Real Club Náutico de Palma a few days before the race. Again, in 2018 it was 8 p.m. of the 29th of July.

In the same Entries section, you can track who has already applied for this year's race in real-time, including country, sail and boat type, owner, skipper, yacht club, and more.

Check out the complete Copa del Rey MAPFRE Notice of Race for 2018 as an example.

Where to get the weather forecast for the Bay of Palma de Mallorca, Spain?

You can get the weather forecast for Palma de Mallorca or the Real Club Náutico de Palma (as well as all other major marinas and ports in Spain and the Mediterranean Sea) in the Windy.app. Moreover, by activating the special Sail Weather Profile you will get a set of more than a dozen ready-to-use weather parameters for this particular wind and water sport. 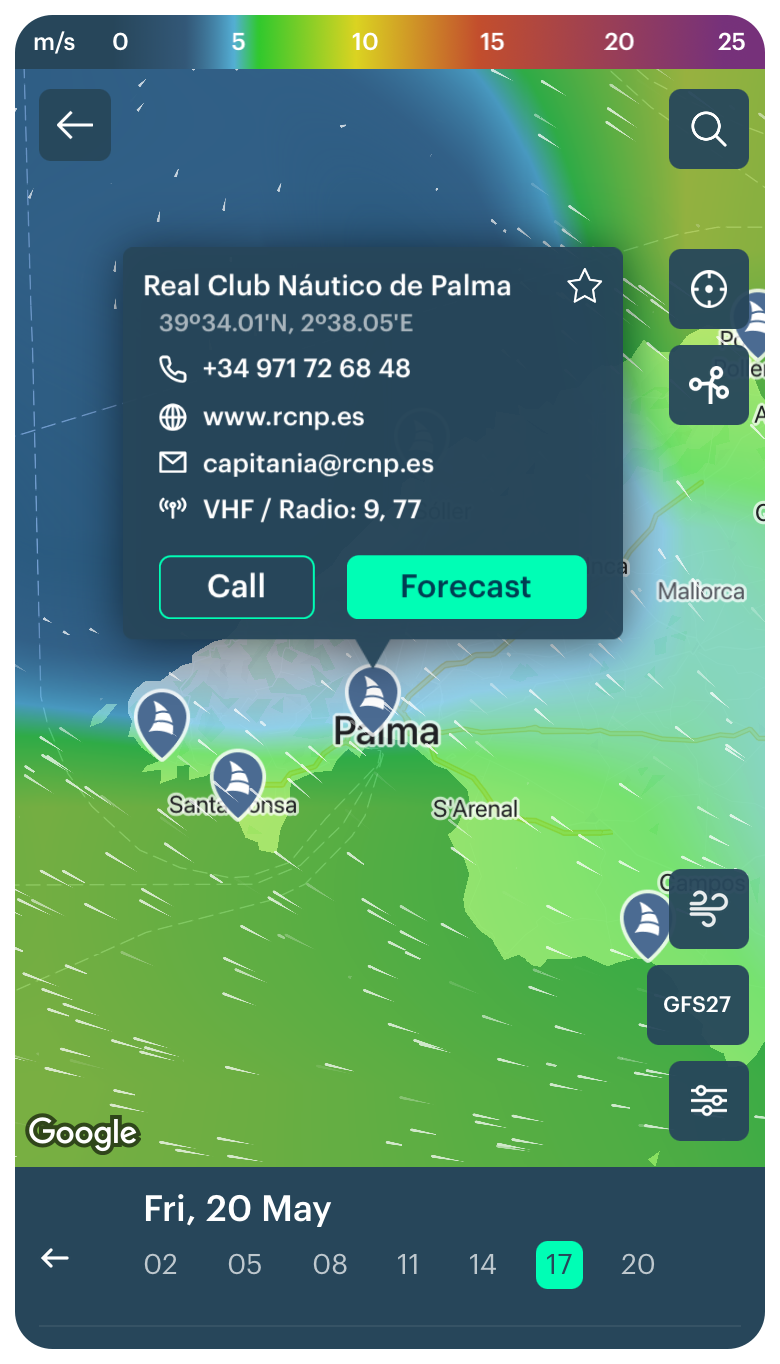 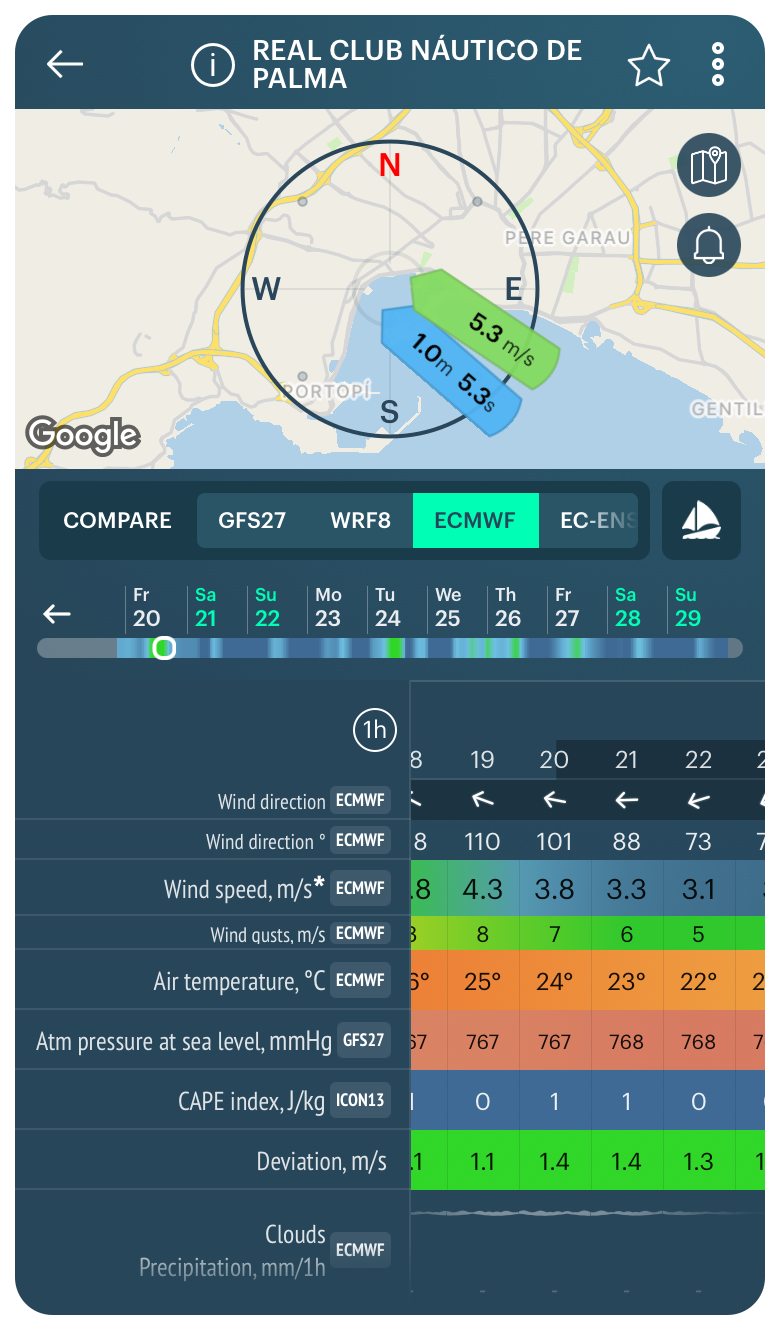 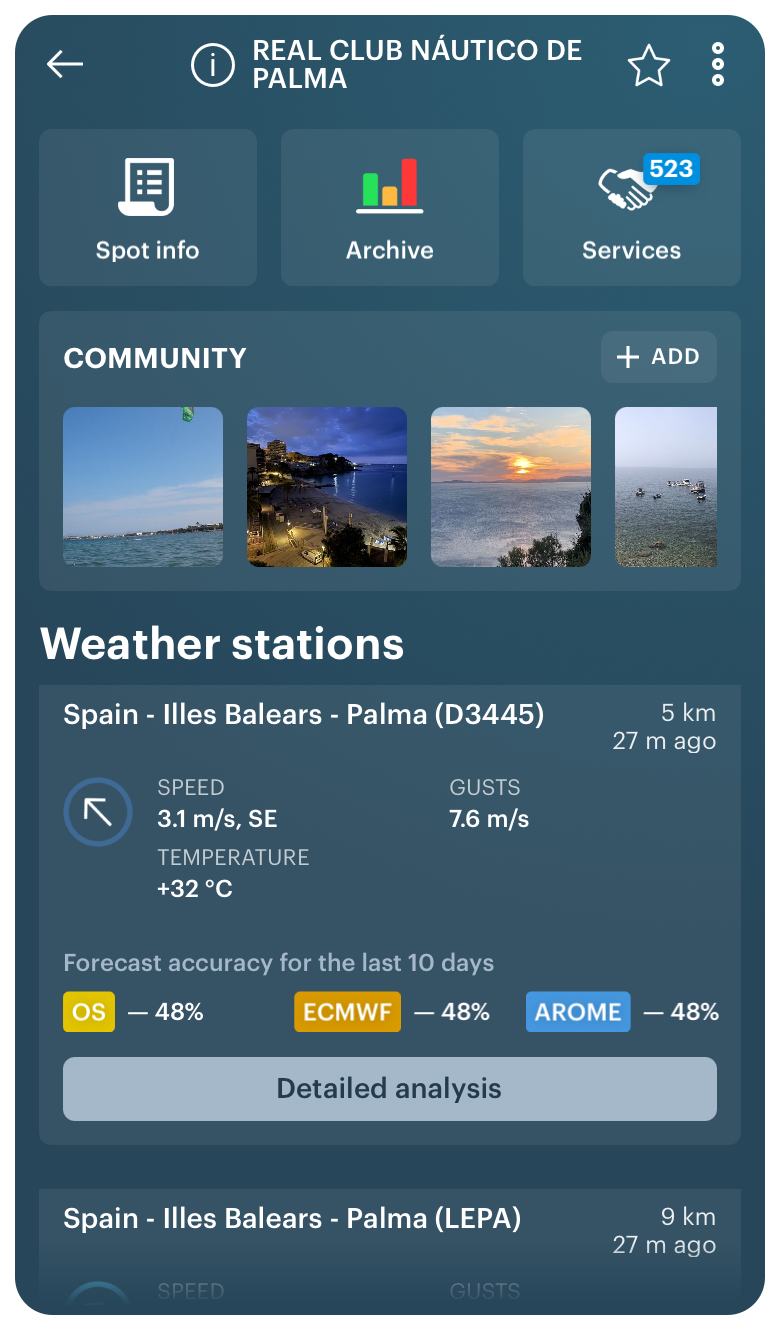 In general, the weather in Palma during the year is classified as the Mediterranean with mild winters and hot and sunny summers, with a constant breeze. Rainfall is not abundant, on average 55 days a year, and is more frequent in the cold half of the year. In contrast, the summer is dry with a low probability of rain.

As we speak about the summer, the time of the regatta, in Palma it starts in mid-June and lasts until mid-September. The maximum that is presented is 31 °C and the minimum 18 °C. In terms of rainfall is the lowest period with only 6 days for the season (38 mm). The weather in Palma during June and July presents wind on 99% of the days, with at least 10 knots m/s. It is an ideal season for wind sports. There is a high probability of thermal winds. Towards August the warming of the water begins to change the quality of the wind and the possibility of thermal winds becomes more complicated.

Learn about the main weather features of the Island of Mallorca in the other three seasons on its spot page on the Windy.app site. Get the weather forecast for other spots of the island:

Read about other largest amateur sportive events in the world and take part in it: