As professional yachtsmen say, “Those who have raced on a centerboard boat, can race on any other boat.” These fast and compact yachts will give you the hang of all the yachting basics. So in this review we will look at length into racing centerboard boats (modern racing dinghies) and catamarans. 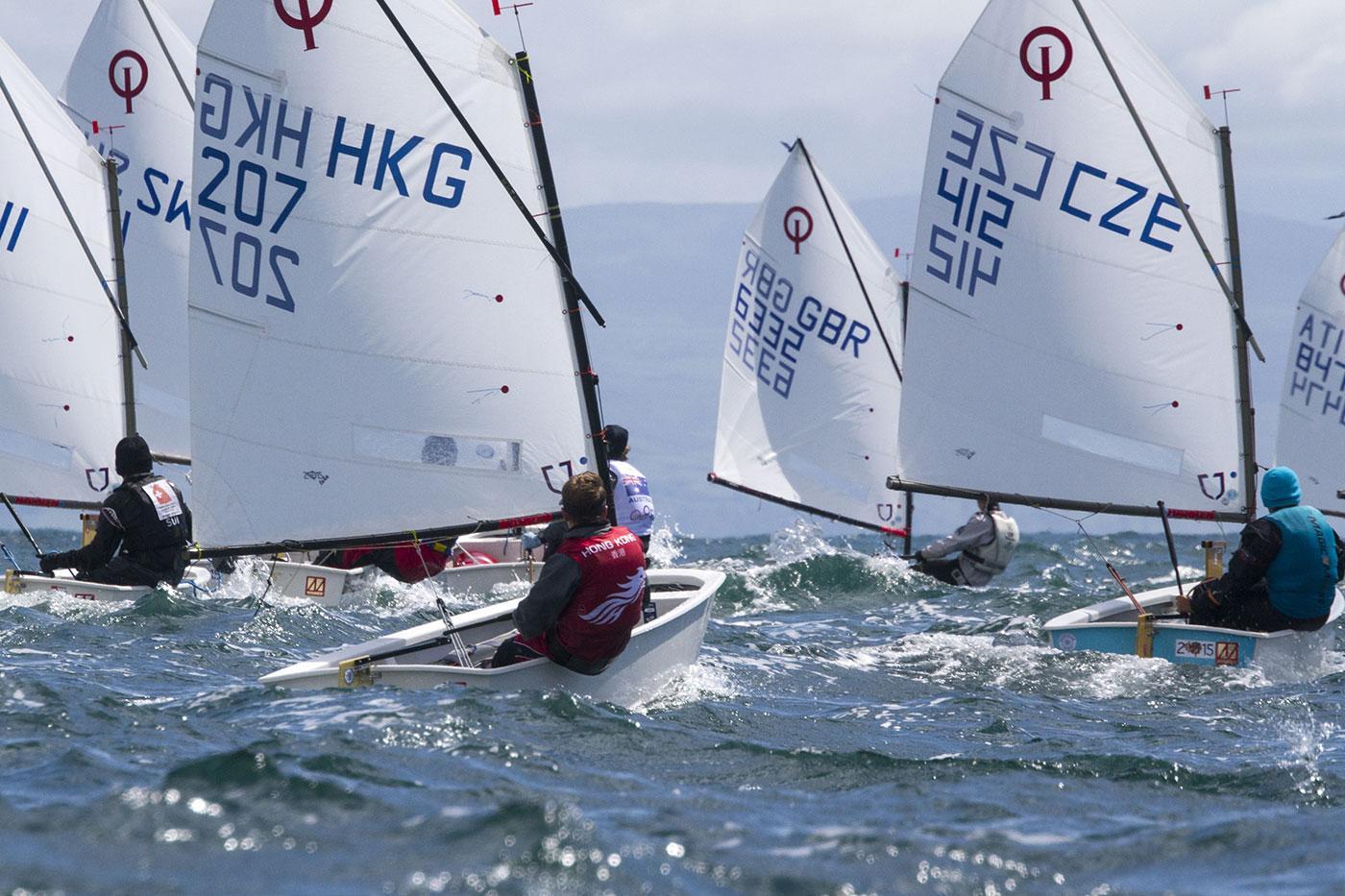 The first boat which is used for training children aged 6 or 7. Resembling a square washtub, this monotype boat has excellent seaworthiness. The sprit rigging (a thin batten bumping up against a mast which supports the upper corner of the four-sided sail), rare today, provides the opportunity to look into the sail’s past. Starting from 1965, the international association of this class holds many regattas, world championships included, and monitors the compliance of construction rules by the producers. 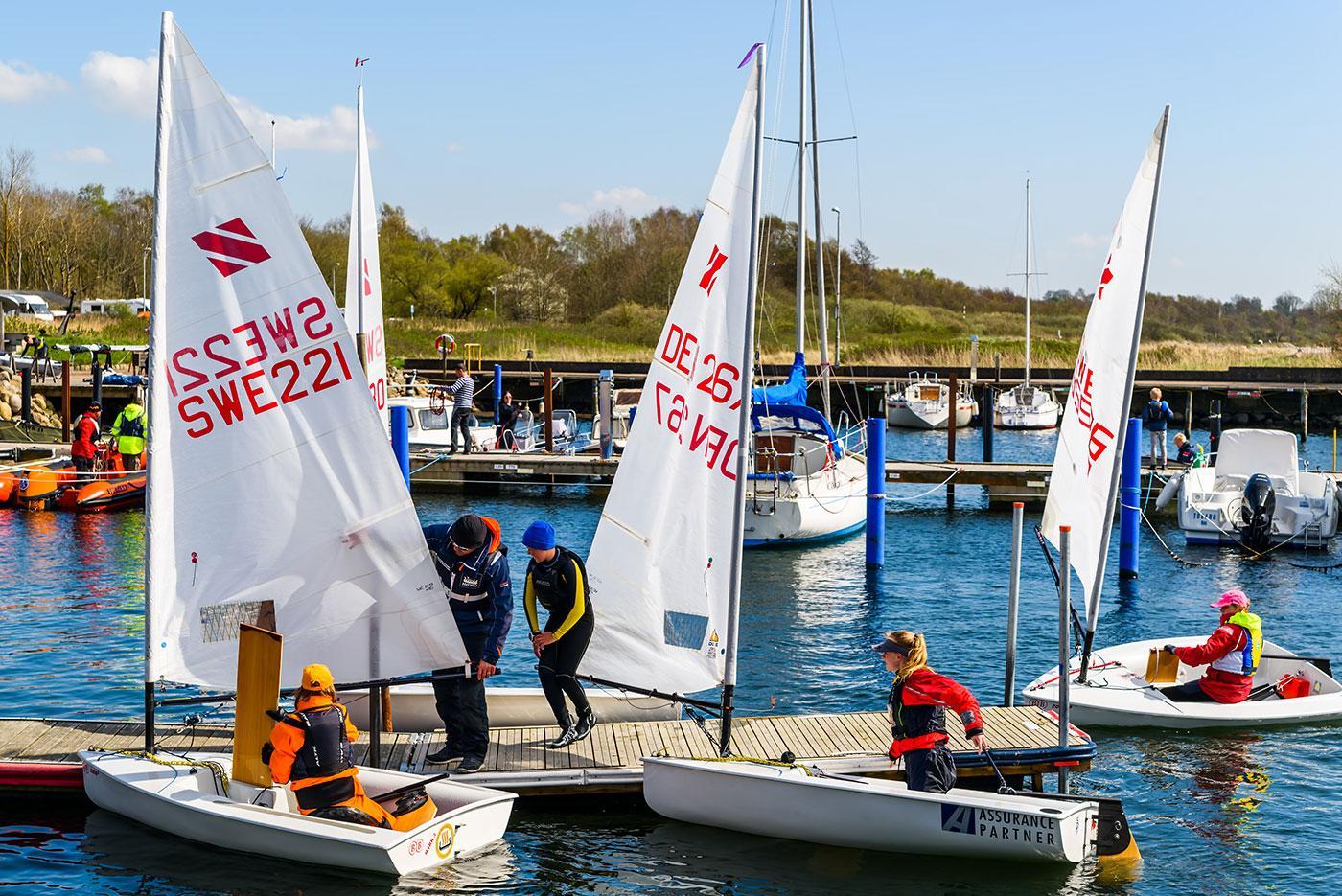 In 1992, the Finnish constructor Henrik Segercrantz built an alternative to Optimist – Zoom 8. The cat-rigged fiberglass monotype no longer resembles a washtub, but rather a real sport yacht. The main point is that Zoom 8 has all the main sail tuning options available on big boats. The optimum weight of the helmsperson is 35-65 kilos. So, having started racing as kids, young athletes may continue their career until age 18. 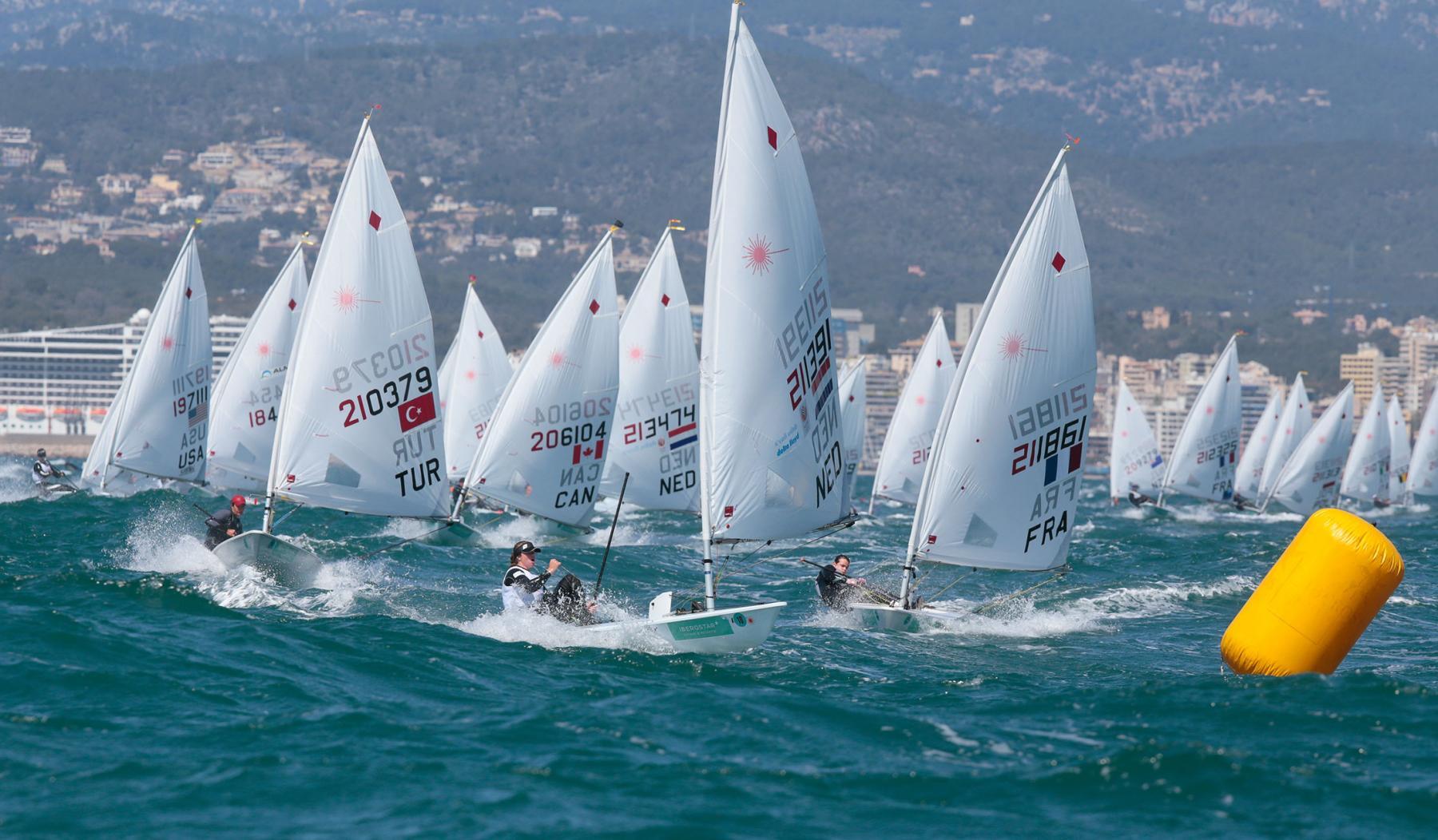 In 1969, Bruce Robert William Kirby, a Canadian constructor, created a centerboard boat which became one of the most successful mass-produced monotype boats in the world. Conceived as a single-handed boat with the settings as simplified as can be, it turned out to be a fast and an athletic boat.

Design simplicity and low requirements for the initial qualification of the yachtsman allowed Laser to quickly gain popularity. A large racing potential envisaged by the constructor lead to the class being added to the Olympic Games as a men’s single-handed event.

In 2008, the female version — Laser Radial — became an Olympic event, too — a shorter mast with a sail of 5.76 m2 was installed on the same hull. This new boat replaced the less successful Class Europe in the Olympic cycle. The next step after the success of this approach was the creation of Laser 4.7 with an even smaller sail designed for very young athletes.

The main advantage of such design over Zoom 8 is that all the equipment mastered by the yachtsmen is transferred to the older Laser boat. Besides, to be able to train you will only need to obtain a new sail and one of the two parts of the mast. It is hardly surprising, therefore, that small sailing schools worldwide appreciated that approach, and Laser stays unparalleled in terms of fleet size among Olympic classes. 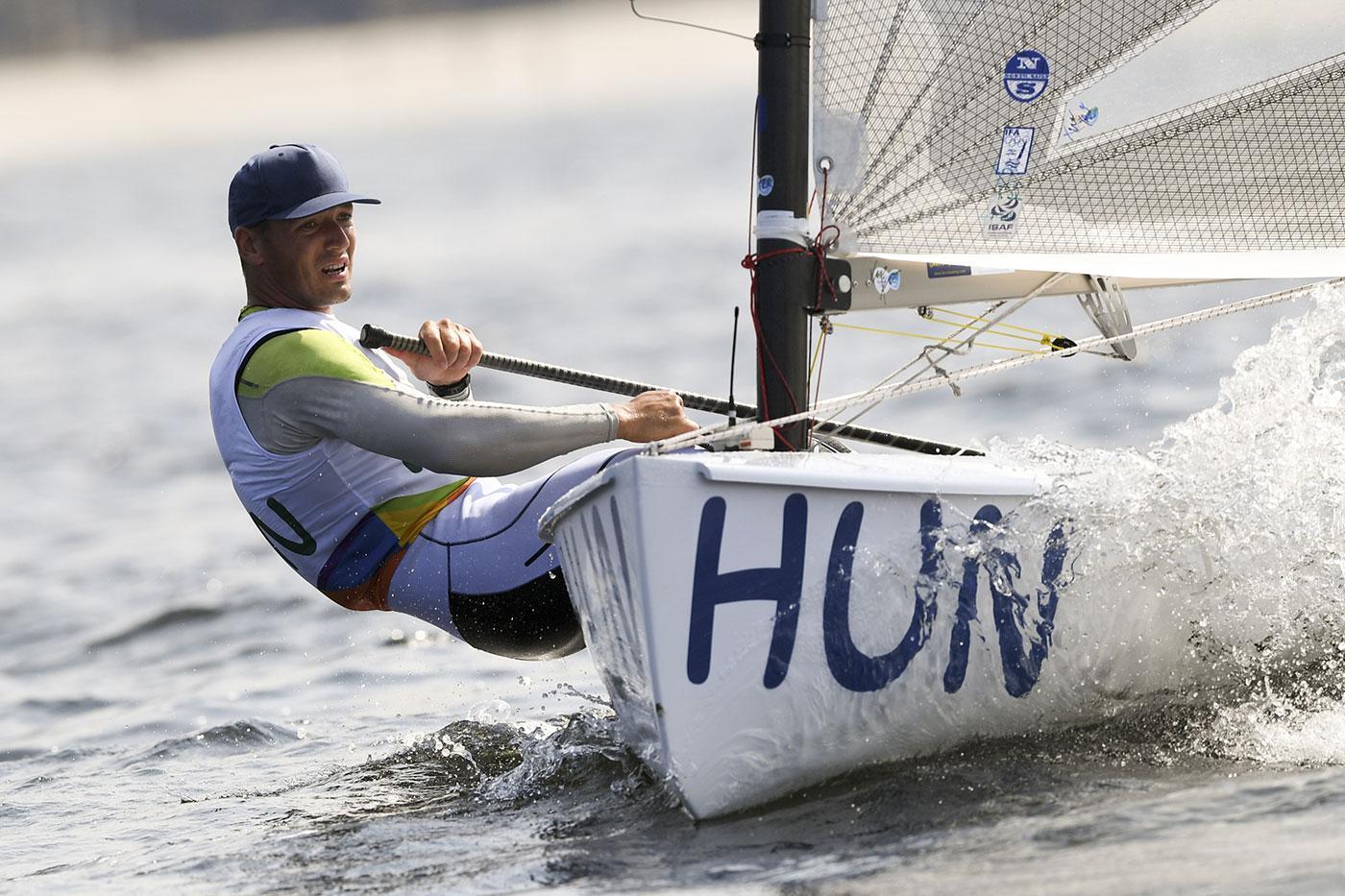 This long-living boat has cat rig. In 1949 it was designed by Rickard Sarby from Sweden. In a mere three years the boat found itself in the Olympic program. Over the past years this class, being a strict monotype, managed to survive an entire technological revolution. Dacron and plywood were replaced by carbon fiber reinforced plastic and cutting-edge laminates.

The looks of the athletes themselves changed, too. While Finn used to be the boat for heavyweight ones, the modern helmsperson may be in the medium weight category but should be in excellent physical shape. This class became one of the first classes where pumping — sail rowing — was officially allowed. So now, even in light and medium wind the athlete constantly has to perform substantial physical efforts. The boat requires a lot of tuning, hence it requires a highly skilled yachtsman.

While the single-handed centerboards have all you need — yourself and the boat, the next type — double-handed boats — requires a crew. The vessel roles are divided quite simply — the sailor and the helmsperson, but the interaction in this couple should be almost intuitive. 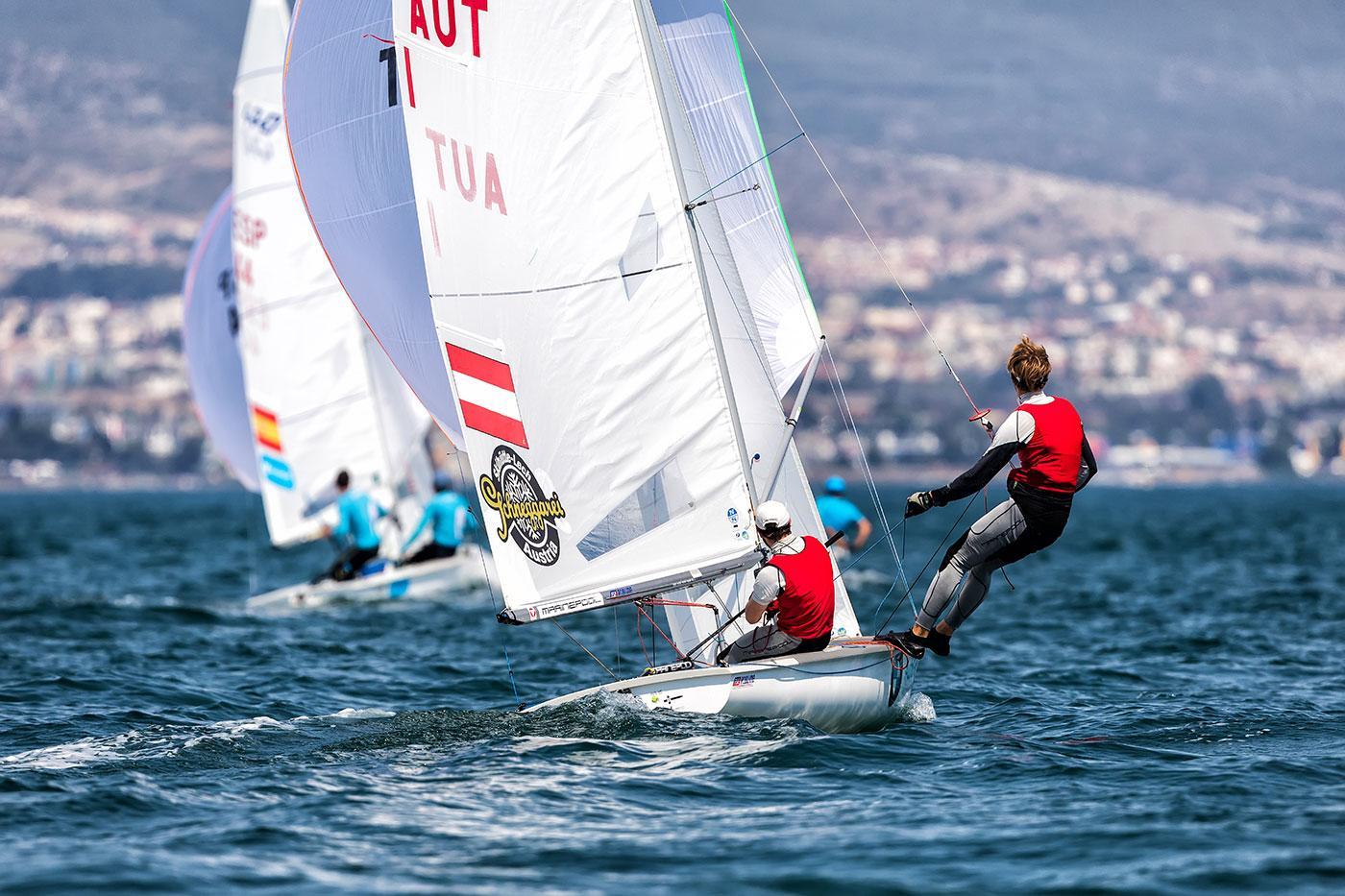 A classic example of a single-handed boat is the 470. Designed in 1963 by the Frenchman André Cornu, the monotype boat secured its place at the Olympic Games in 1976. An optimum number of tunings, combined with the reasonable area of sails, allow the crew to fine-tune the boat and concentrate on navigation.

On the one hand, the 470 overlooks many mistakes, which allows the athletes to start their path in double-handed boats with this very boat. On the other hand, to win in a race, the navigation technique and understanding of sails work should be immaculate. The boat is equipped with a trapeze for the sailor — it is impossible to heel a sails area so big without it. Starting with the 2020 Olympics, the 470 boat will be a mixed crew one, i.e. consisting of a man and a woman. 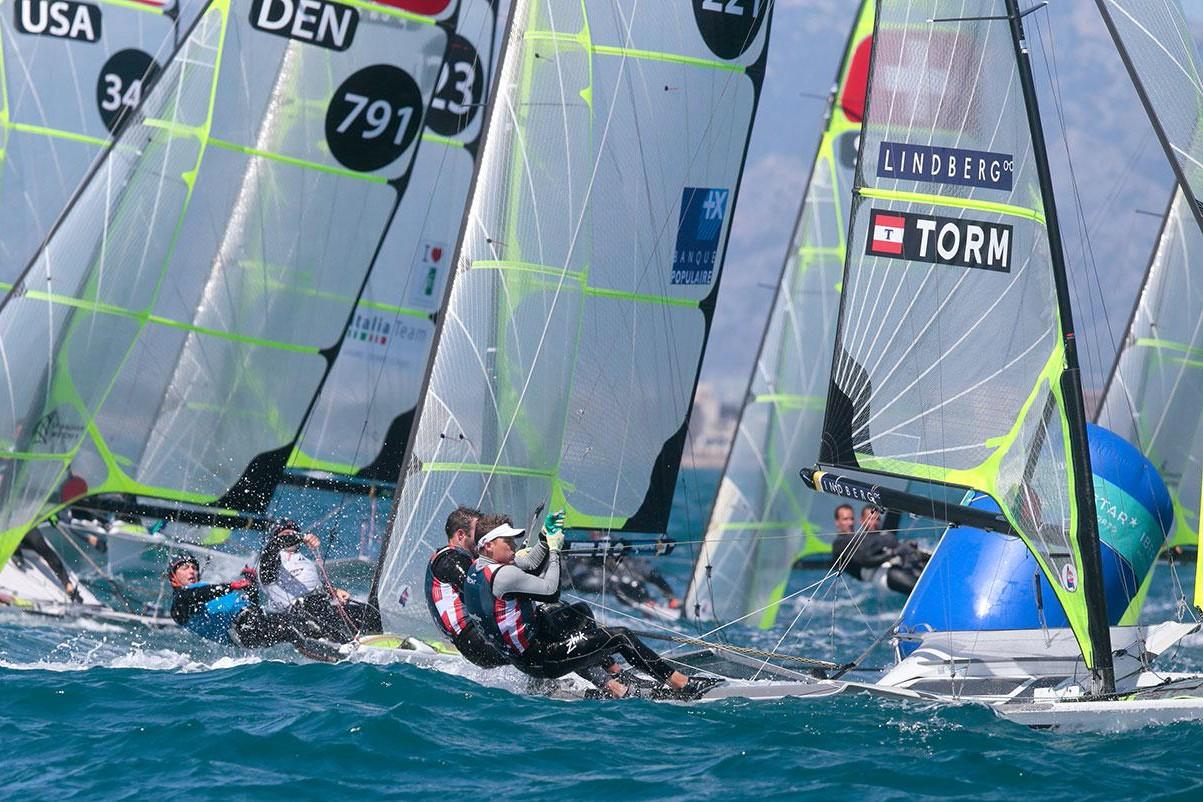 The 49er is the most high-tech monohull single-handed boat in the Olympic program. Overloaded with skiff sails, it was created by Julian Bethwaite exclusively for the Olympic Games of Sydney 2000. To efficiently cope with a high load, both members of the crew work in a trapeze. As a result, the 49er claims the most demanding requirements to the training and fitness level of the athletes.

Similar to Laser Radial, the female double-handed 49er (49erFX) was created, with the same hull but a shorter mast and a smaller sail area. Due to its unique features, this class is a true training ground for professional teams performing on big keelboats. High physical load combined with the need to fine-tune the sails allows the racers to become experts and get the most out of any yacht.

There is a vast diversity of leisure and even cruiser boats based on sport boats designs. They are perfectly suitable for closed waters, easy to transport and utilize. Training on such boats is a gateway to the world of yachting for those who are not going to pursue a career in sport, have budget restraints or do not have a reservoir deep enough for keelboats at their disposal. Laser Bahia can be called a good example of a cruiser yacht, while Presto 30 that of cruiser centerboard boat. 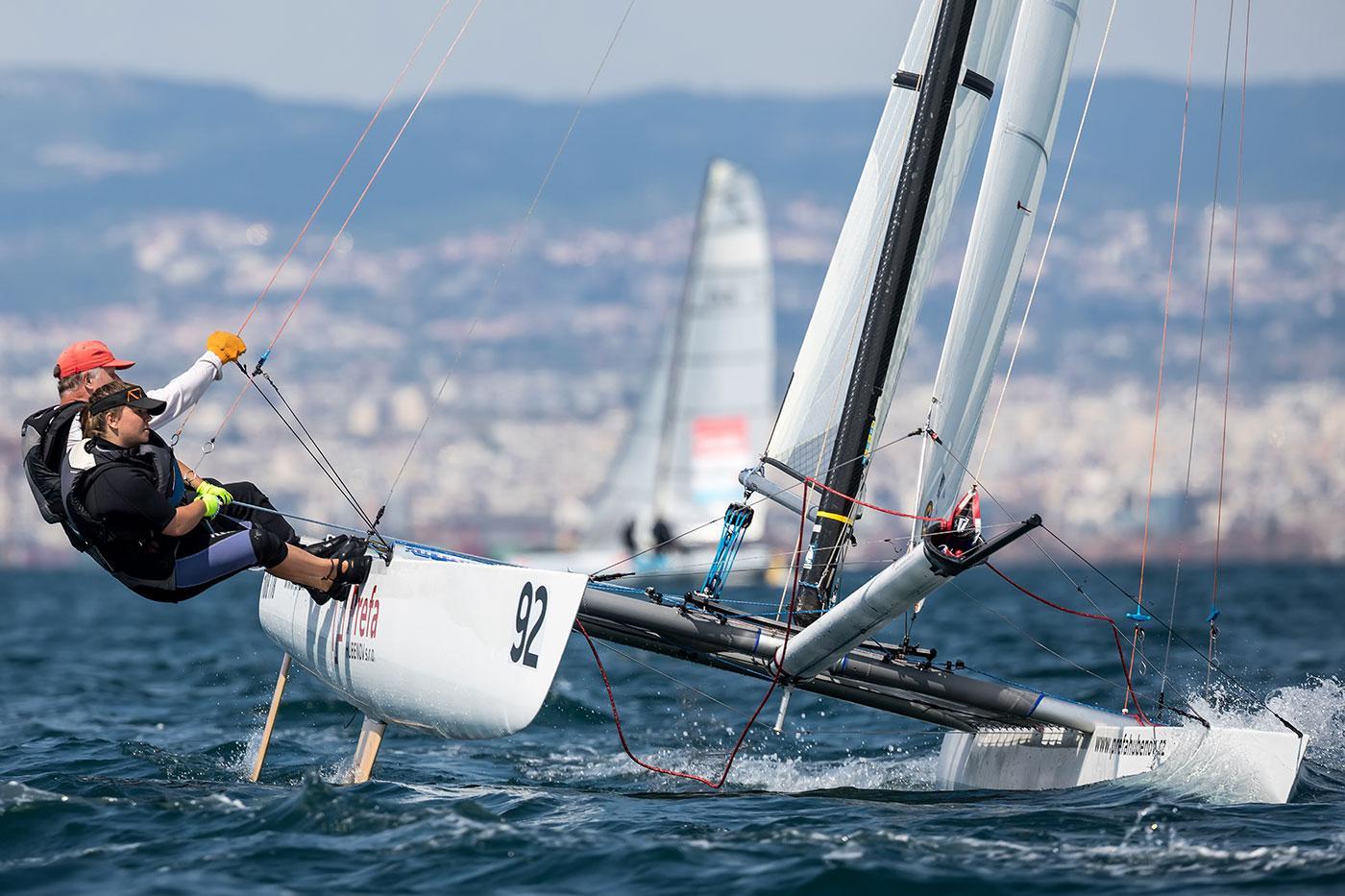 A racing monotype catamaran and the first multihull yacht at the Olympic Games. The catamaran was designed in Great Britain in 1967 and took part in the Olympic Games for the first time 10 years later. The sailor had a trapeze for the most efficient heeling. Tornado was perfectly off on one float and was unrivalled in terms of speed as compared to other Olympic classes.

In 2000 it was substantially upgraded — the shape was changed and the sail area enlarged, it got a gennaker and a second trapeze for the helmsperson. Despite that, the catamaran was removed from the Olympic program in 2008. Yet, it still remains very fast and most attractive for those who love high speed water racing. 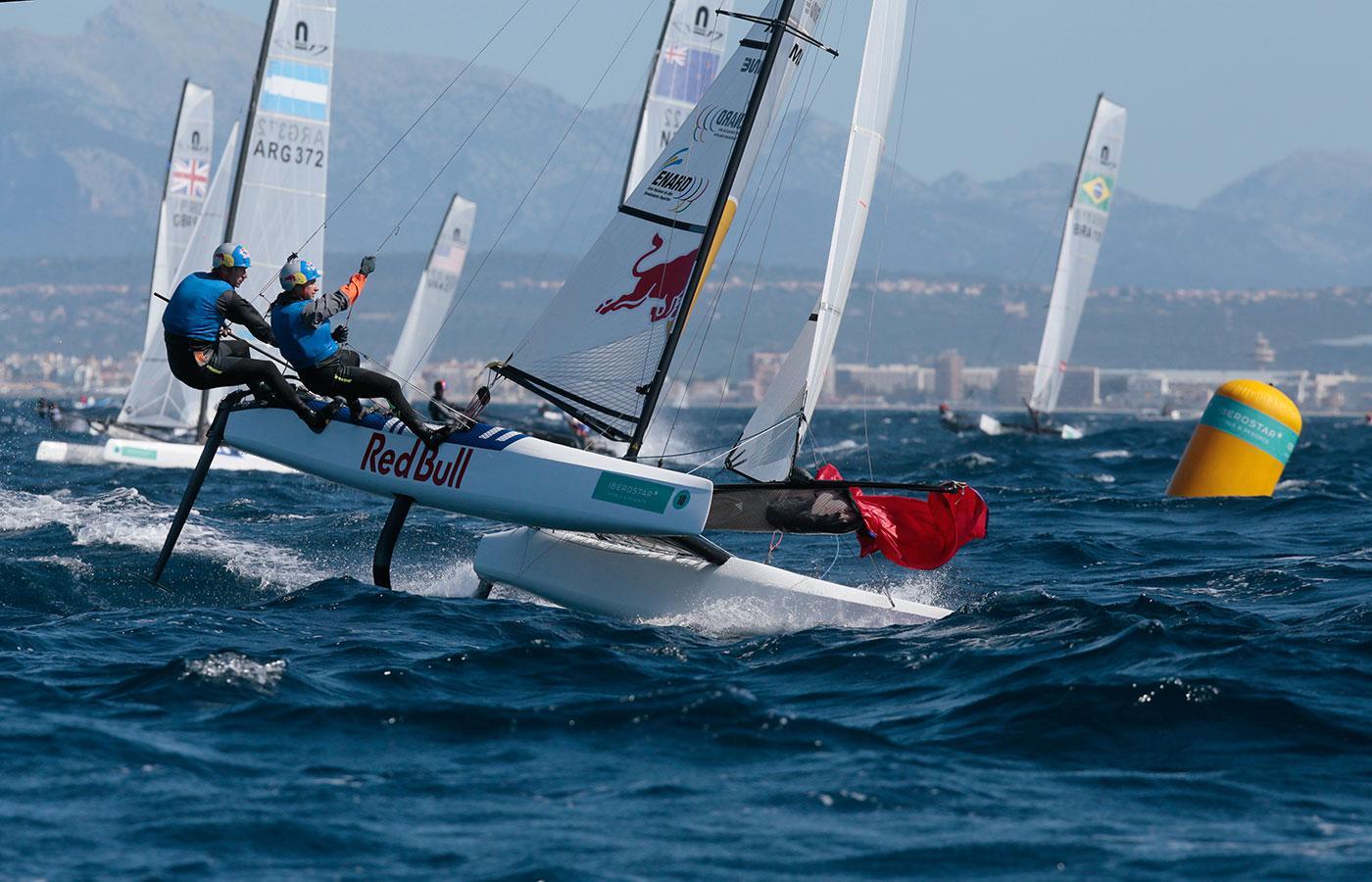 The project was developed in 2011, and as early as 2012 it was decided to add this class to the Olympic program for 2016. The first world championship was held in 2013, but the fleet was rather small. Additionally, the athletes had a lot of issues with the equipment which was finalized literally on the go to be in time for the Games.

Despite its young age, the class was successfully refurbished, so at the 2020 Olympic Games it will be competing in its hydrofoil version. In essence, this sport vessel can hardly be called a yacht: two floats “soar” over the water on hydrofoil wings, which requires a few new skills from the crew as compared to the traditional sailing sport. As a result, Nacra 17 today is a domain of the professionals aiming for the Olympic gold. 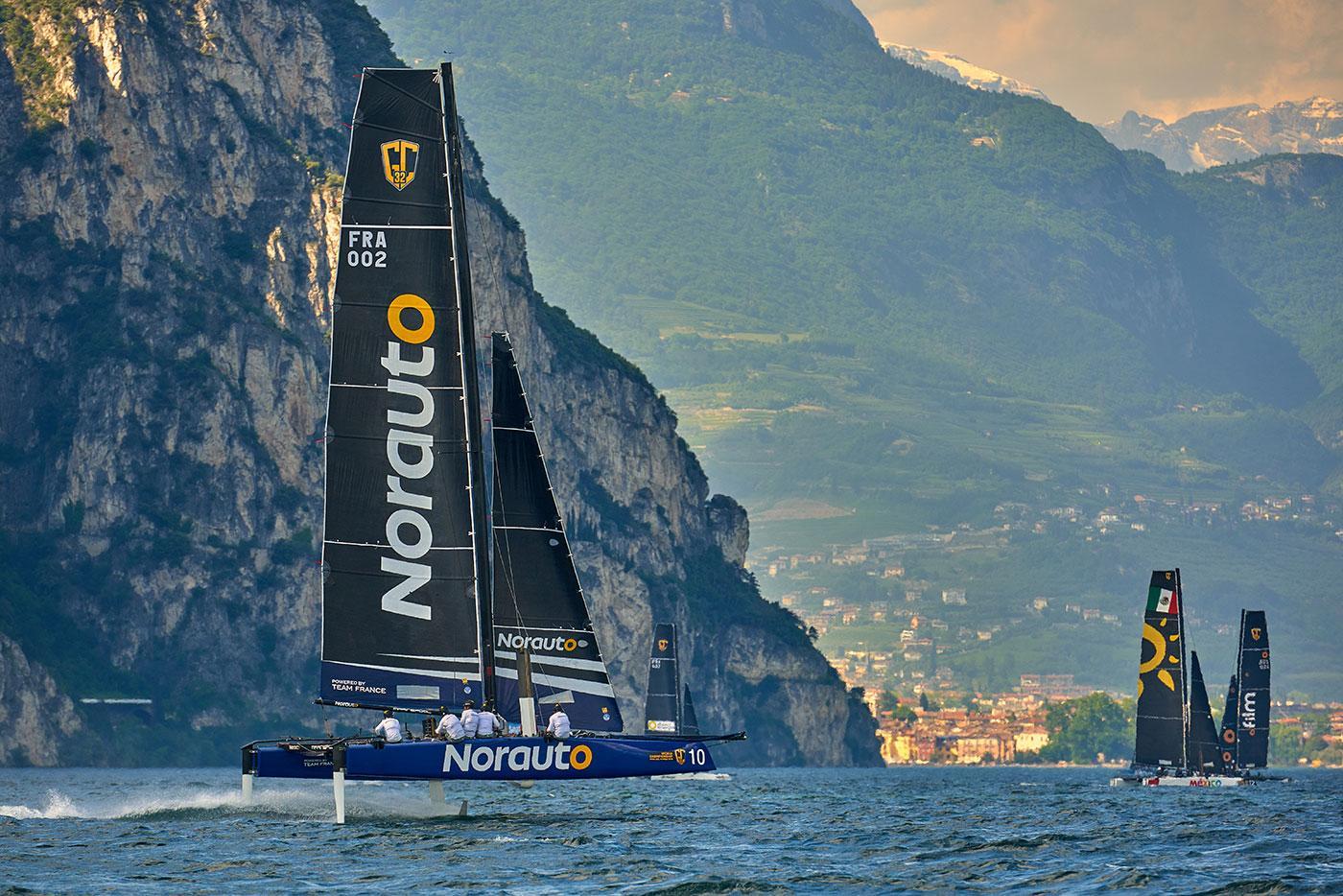 An incredible speed of 74 kilometers per hour, four hydrofoil wings, a protective helmet as a mandatory gear item – this is all about the ultra-modern carbon catamaran GC32. It was this catamaran that replaced Extreme 40 at the famous Extreme Sailing Series regatta in the latest seasons. This extreme vehicle has put our perception of sailing races upside down making them a widely popular show. 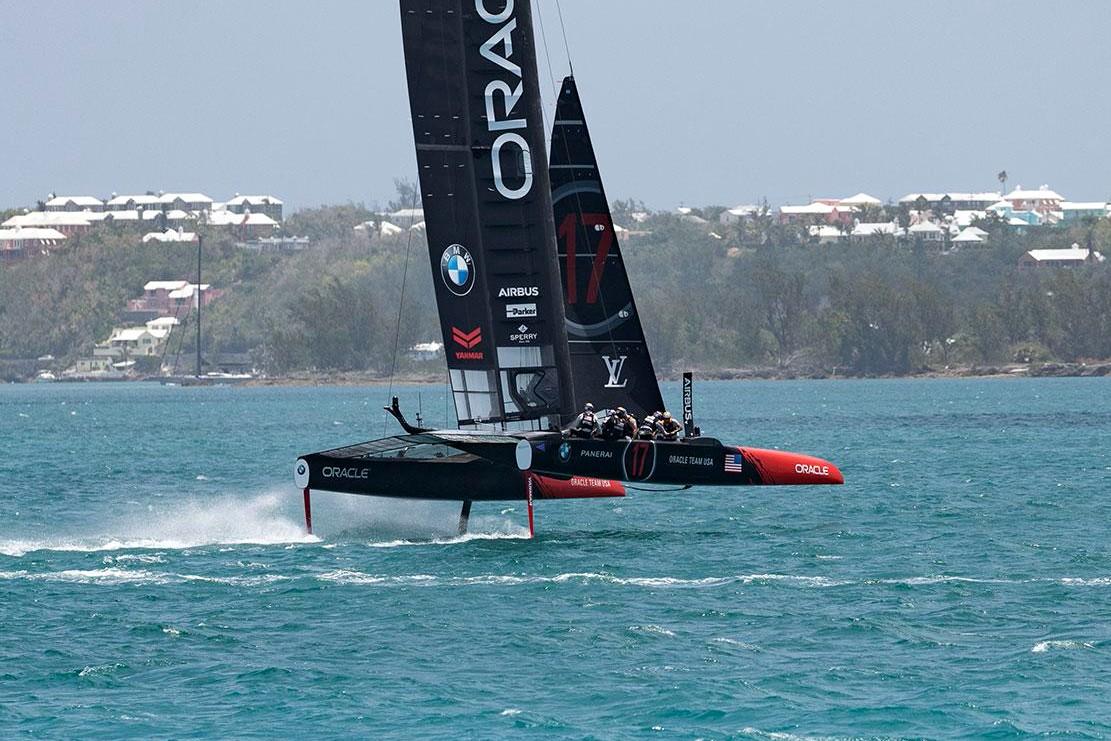 The AC50 is an embodiment of the most advanced achievements of contemporary science. Developed in close cooperation with Airbus engineers for the America’s Cup races, this vessel is not a sailboat in the conventional meaning of the word.

Instead of the main sail, AC50 uses a wing with hydraulic power which helps to change its profile. The futuristic looks are supplemented with hydrofoil wings.

The catamaran can gather speed four times faster than the true wind. However, the America’s Cup organizers have decided that the next championship will be held on AC75 monohull keelless foil boats boasting an even bolder design.

This post was originally published in the Windy.app blog on August 2, 2019.

The complese guide on yachting schools and licenses