Super-typhoon Haishen 2020 was a category 5 tropical cyclone, which was active in the Northwestern Pacific Ocean, in Japan and South Korea, in the first week of September 2020. It is also called typhoon Kristine 2020.

Warning: if you live in the area affected by typhoon Haishen, follow all precautions recommended by local police, fire department, medical services, and other official government organizations to minimize the impact of typhoon. Contact the appropriate services if you experience difficulties.

Bookmart this page to get typhoon Haishen 2020 updates, tracker and live map, forecast, latest news, quick facts, and detailed information from this page.

Typhoon Haishen 2020 passed Japan and South Korea and is now at the western part of the Sea of Japan, east of Korean peninsula. As predicted, it struck Kyushu and Korean coast as a category 1 typhoon in SSHWS with wind speed of 75 kt (135 km/h or 85 mph).

Hundreds of thousands are without power on Japanese Kyushu. There’s no serious damage but dozens are injured due to torrential rain and strong wind. Four people are missing after a landslide on southern Kyushu.

After battering Japan the typhoon reached Korea in several hours. One person was injured there after his car was flipped by a wind gust and one is missing as a result of flooding. Maximum precipitation of more than 400 mm per day was registered on Jeju island. In South Korea the damage is much higher than in Japan. You can see it by yourself from the news reports here and here.

In the Sea of Japan typhoon Haishen made the coastguard stop a rescuing operation. They were trying to find survivors from the ship which was drowned due to typhoon Maysak. The operation will be continued after the weather stabilises.

Tomorrow is predicted to be the last day for typhoon Haishen. It would turn into an extratropical cyclone but would still be dangerous. The next country to be affected by the typhoon will be North Korea. Haishen now has the speed of “only” 50 kt (95 km/h or 60 mph) but the main danger for continental countries is rain which can become even stronger after a landfall. China and Russia expect serious damage either. 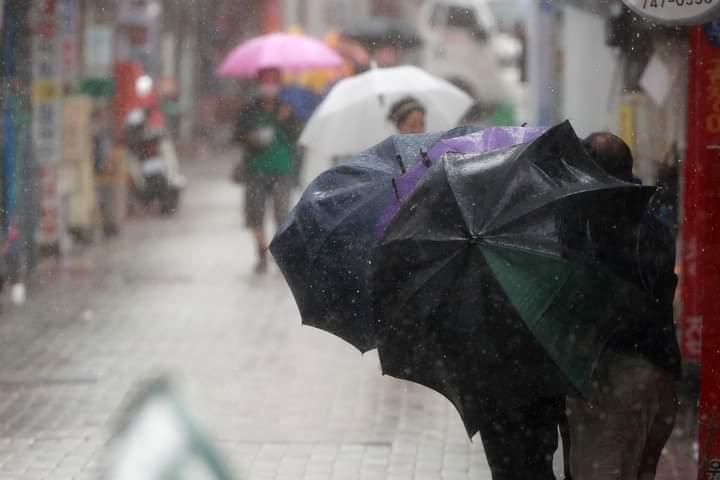 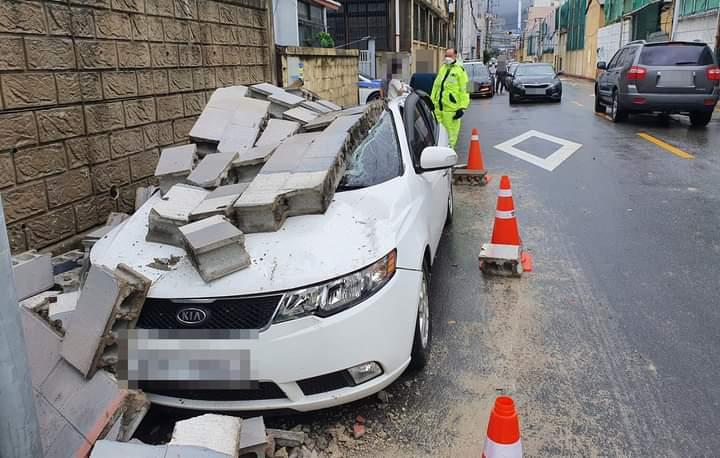 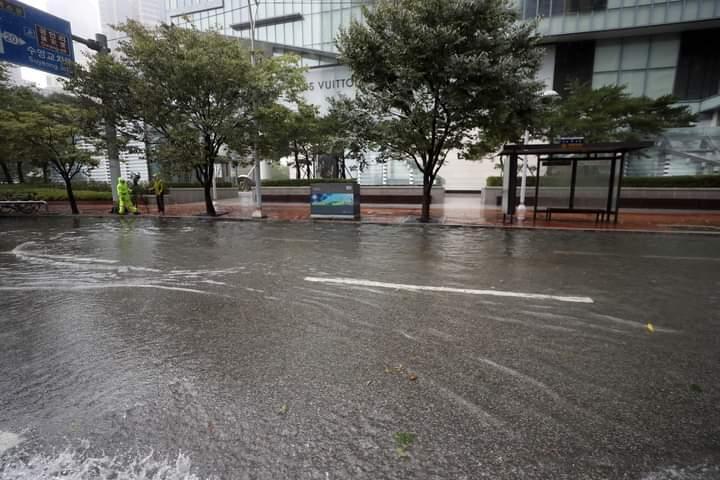 Typhoon Haishen 2020 passed Okinawa and Amami islands earlier today. It is now southwest of Kyushu island. Nagasaki, Kagoshima and Kumamoto will be the most affected cities in the next several hours.

Witnesses say there’s no severe damage on the islands due to regularity of such events. But thousands of people now have to stay home, often without electricity. The wind has cut power to more than 10 thousands homes on Okinawa and Amami islands. You can see wind speed near the center of the typhoon from James Reynolds Twitter video. And here you can see the wave height from the FP News Agency YouTube video.

The typhoon has now weakened to category 2 in SSHWS. Wind speed near the center of Typhoon Haishen 2020 is 95 kt (175 km/h or 110 mph). According to the forecast, Haishen will continue to weaken slowly and can reach Korean Peninsula as a category 1 typhoon. It’s less than the previous typhoon, Maysak, had in approximately the same location.

The main danger for coastal and continental regions are possible floods and landslides caused by close to record rainfall. South Korea, North Korea, China and Russia are the countries to be  affected by these disasters. 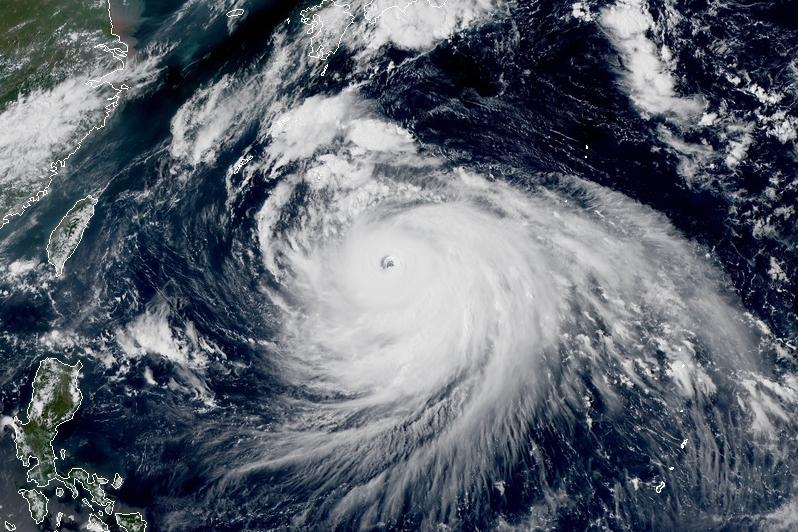 Thousands of people are advised to evacuate from their homes on Okinawa, Amami and Kyushu islands, Japan, due to possible catastrophic effects. The typhoon is predicted to hit the islands on early Sunday, September 6. The most damaging factors would be storm winds and high waves. Rainfall is also expected to be massive.

Predicted track of Haishen is very similar to the track of the previous typhoon, Maysak. But the intensity of typhoon Haishen is even higher. You can check the news on Maysak on our website to find how the consequences of this catastrophic event can look like. 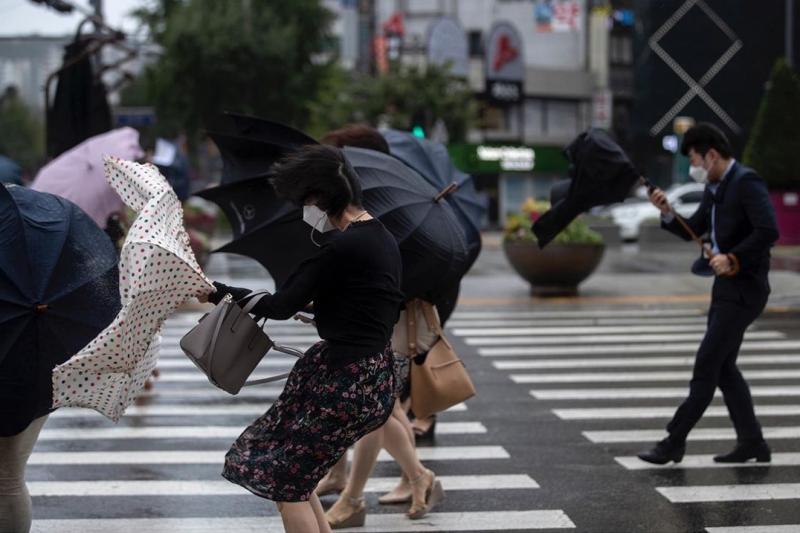 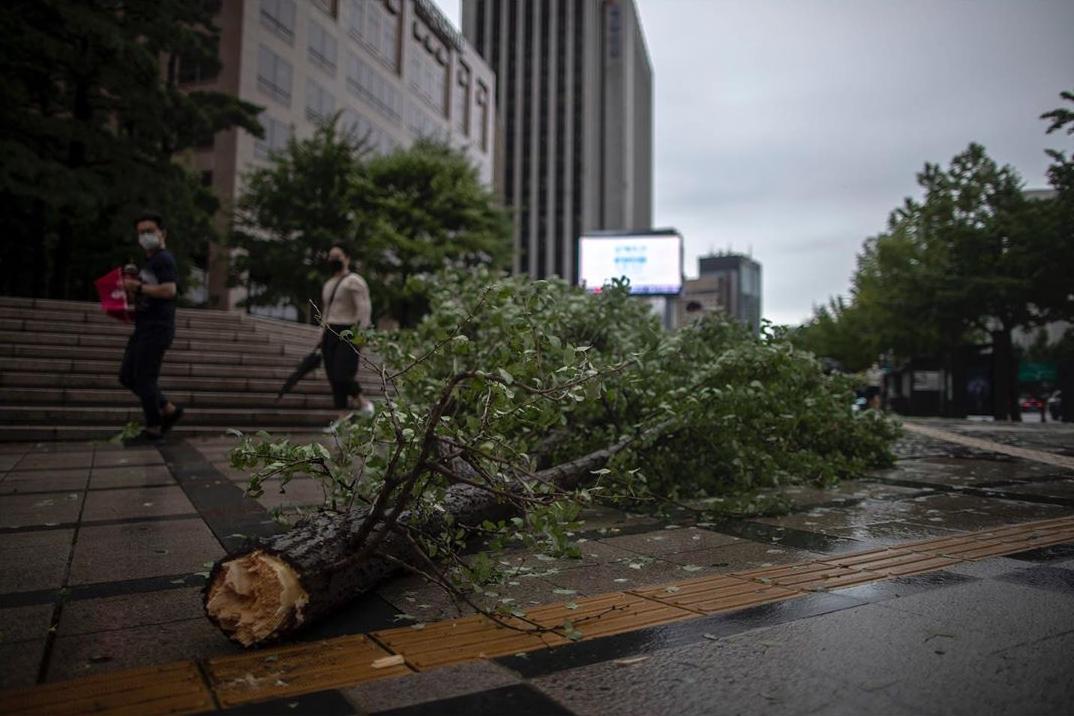 Wind speed near the center of Typhoon Haishen 2020 has increased up to 100 kt (185 km/h or 115 mph) in 10 minute mean or 135 kt (250 km/h or 155 mph). That makes it a category 4 super-typhoon in SSHWS. It’s predicted to continue intensifying. The typhoon will develop into the highest category 5 by Saturday, September 5. Haishen is sure to become one of the strongest typhoons of the season.

Predicted path of the typhoon remains the same since yesterday. The first territories to be damaged would be Okinawa and Amami Islands, Japan. That would happen late on September 5. Watch these satelite video from NOAA.

Typhoon will then pass by Kyushu and western Shikoku. Landfall is expected to happen on South Korea’s coast. That would be the third typhoon to strike the country in a row. After that Typhoon Haishen will weaken by September 7. But it would still be violent for North Korea, China and Russia. Typhoon Haishen can have a catastrophic impact on these countries with the highest wind of the season and rainfall, together with floods and landslides.

Tropical depression, later named Haishen, formed on August 31, and spent 2 days moving southwestwards. Maximum wind speed was 30 kt and didn’t change for a while. However, late on September 1, the depression started turning towards Japan and strengthening. It became one of the most intense and potentially harmful typhoons of the season just in several hours. 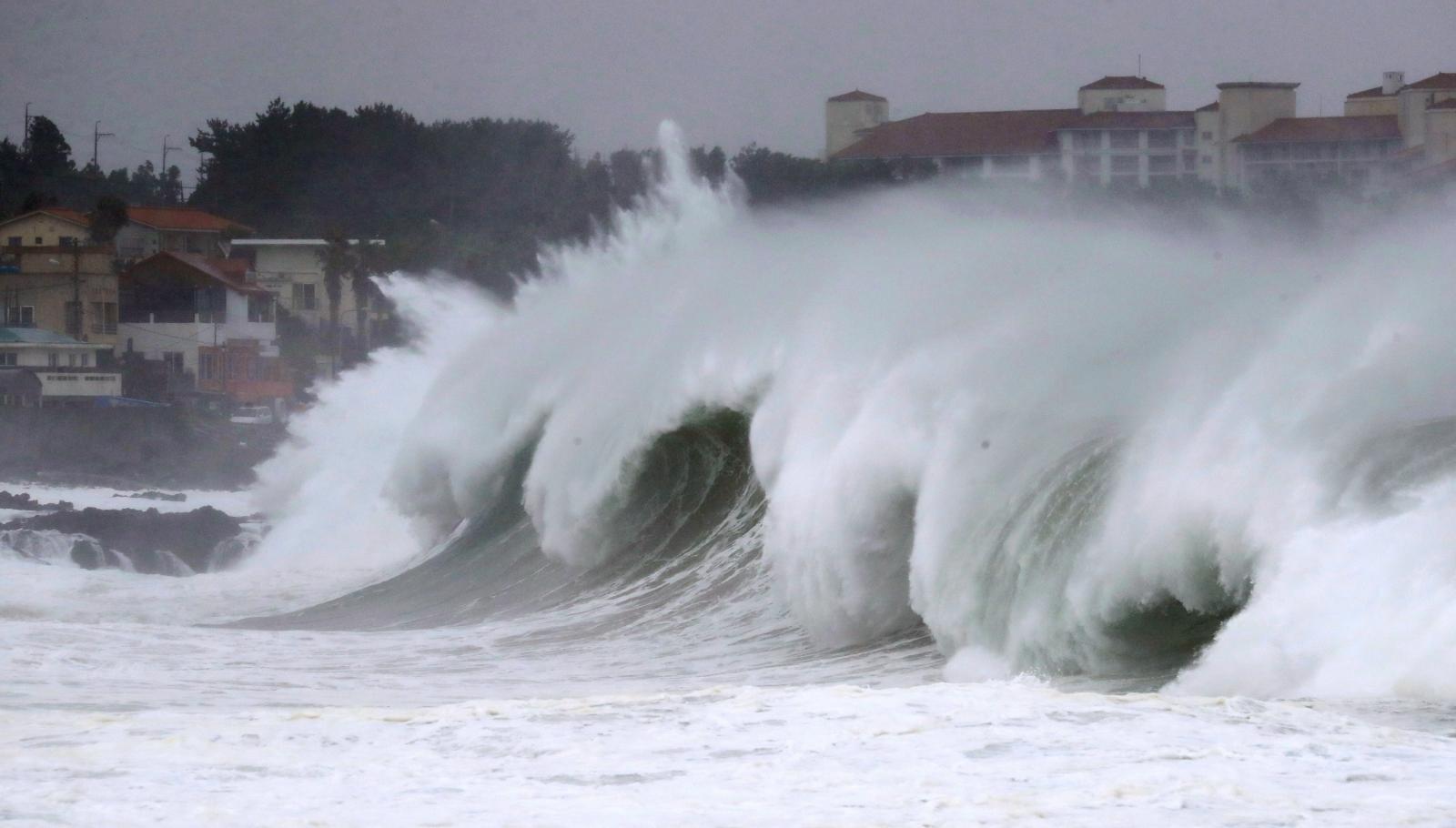 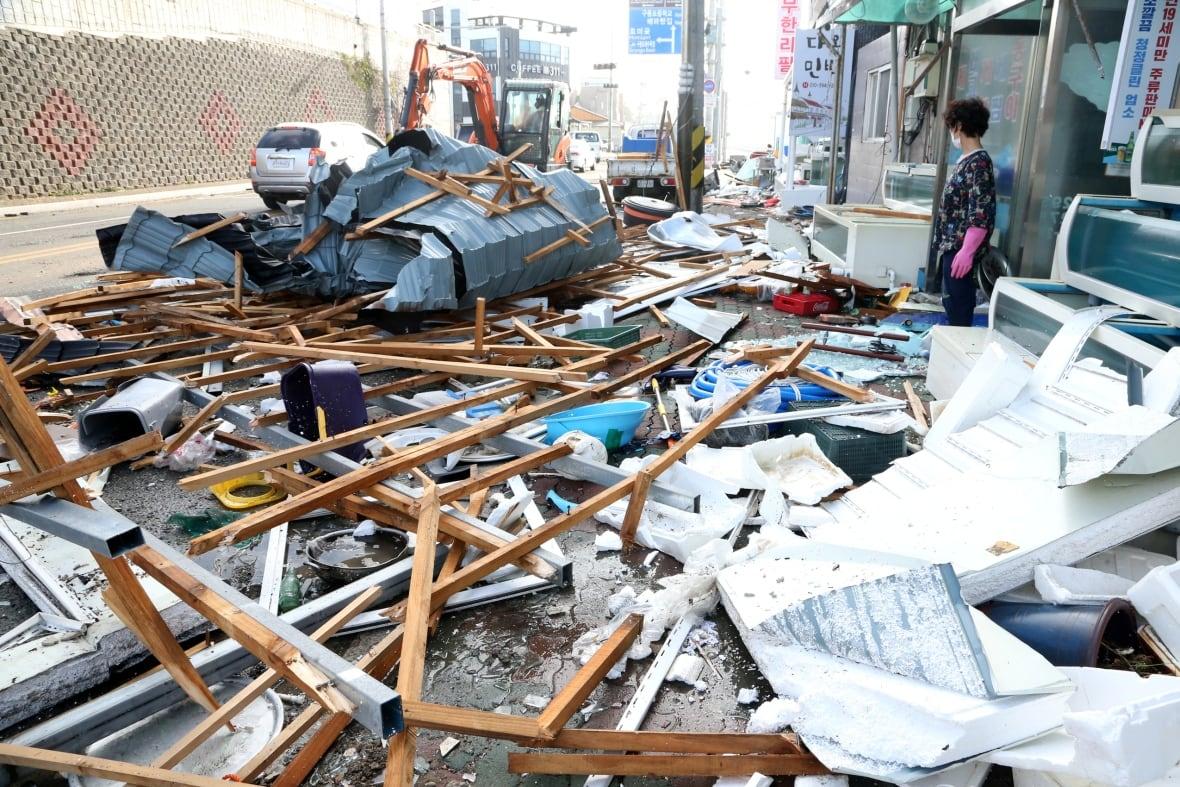 Another tropical cyclone, typhoon Haishen 2020, is strengthening in the Northwestern Pacific basin, south of Japan. Due to the latest forecasts, it’s going to become even stronger than typhoon Maysak 2020 and get at least category 4 in SSHWS with wind speed higher than 110 kt.

The landfall is expected to happen on South Korea’s coast. But the first territories to be in danger are Amami islands, Kyushu, Shikoku and western Honshu in Japan. Then the typhoon will be the third to strike Korean Peninsula in a row. China and Russia can also be affected. 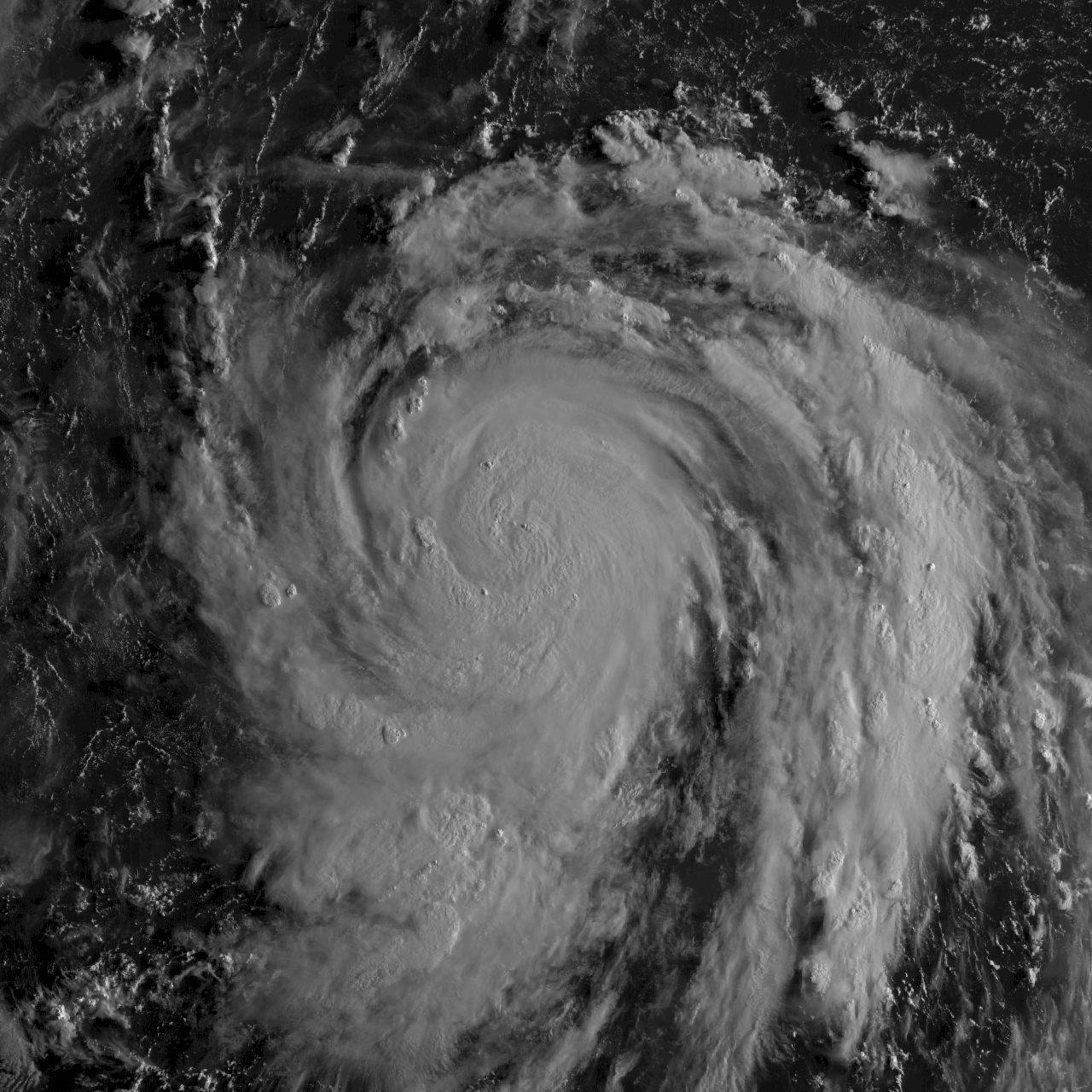 Satelite image of the typhoon Haishen 2020

At the moment Haishen is located to the southeast of Japan. Wind speed near the center is 75 kt (140 km/h or 85 mph) and increasing rapidly.

Tropical depression, later named Haishen, formed on August 31, and spent 2 days moving southwestwards. Maximum wind speed was 30 kt and didn’t change for a while. However, late on September 1, the depression started turning northwards and strengthening at the same time. It’s now moving westwards and continues to turn towards Japan. Later forecasts will give a more detailed track of typhoon Haishen 2020.

Projected path of the typhoon Haishen 2020

On the cover of this page, you see tracker and live map of the typhoon Haishen 2020.

Scroll or zoom (+ / -) the cover to find out where the hurricane is now, and how strong it is. You can also determine the speed of the hurricane by its color. On top of the live map, there is a colorful scale. The speed is in m/s (meters per second).

At the bottom of the map, there is a weather forecast for the next 10 days. Scroll it to the right to see the projected path (track) of the typhoon Haishen 2020. Or push the arrows or the "Play" button to get the forecast.

Check the weather forecast in your region in Windy.app for iOS and Android.

In the app you see then same tracker and live map. Do the same to find out where the hurricane is now, and how strong it is. Use many additional app features: 4x larger HD map, Wind Bards, Offline Mode, Wind Gusts, Precipitation, Weathter Models, and different Views of the Map, and other.