What can a synoptic map tell us about the weather

A synoptic map is a map of the weather, so it is also known as a weather map or weather chart.

Meteorological services of every country create such maps. But you might wonder why you would need them since the weather forecast is easily accessible. Any site can tell you: “Tomorrow it's going to be 20 °C, with heavy rain at 14:00, and wind up to 7 m/s”. So how can a synoptic map help?

In this lesson of the Windy.app Meteorological Textbook (WMT) and newsletter for better weather forecasting you you will learn what a synoptic map is and how to read it.

What is a synoptic map?

The word “synoptic” originates from the Greek “synopsis”, which means "a general view," and literally "seeing something all at once”. A synoptic map (also known as weather map or weather chart) is a map of the weather, meaning a view of the weather “from above”. These maps can be made for any territory, from an individual region of a selected country to an entire hemisphere.

The weather is a combination of a number of factors, but it is always shaped by processes on a large scale, covering thousands of kilometers; cyclones and anticyclones, trade winds, easterlies and westerlies, and monsoons. All of these winds are caused by differences in atmospheric pressure. That is why lines of equal pressure called isobars are the main element of any synoptic map. Since the centers of cyclones and anticyclones are the areas with the lowest and the highest pressure, respectively, equal pressure lines are arranged around them. 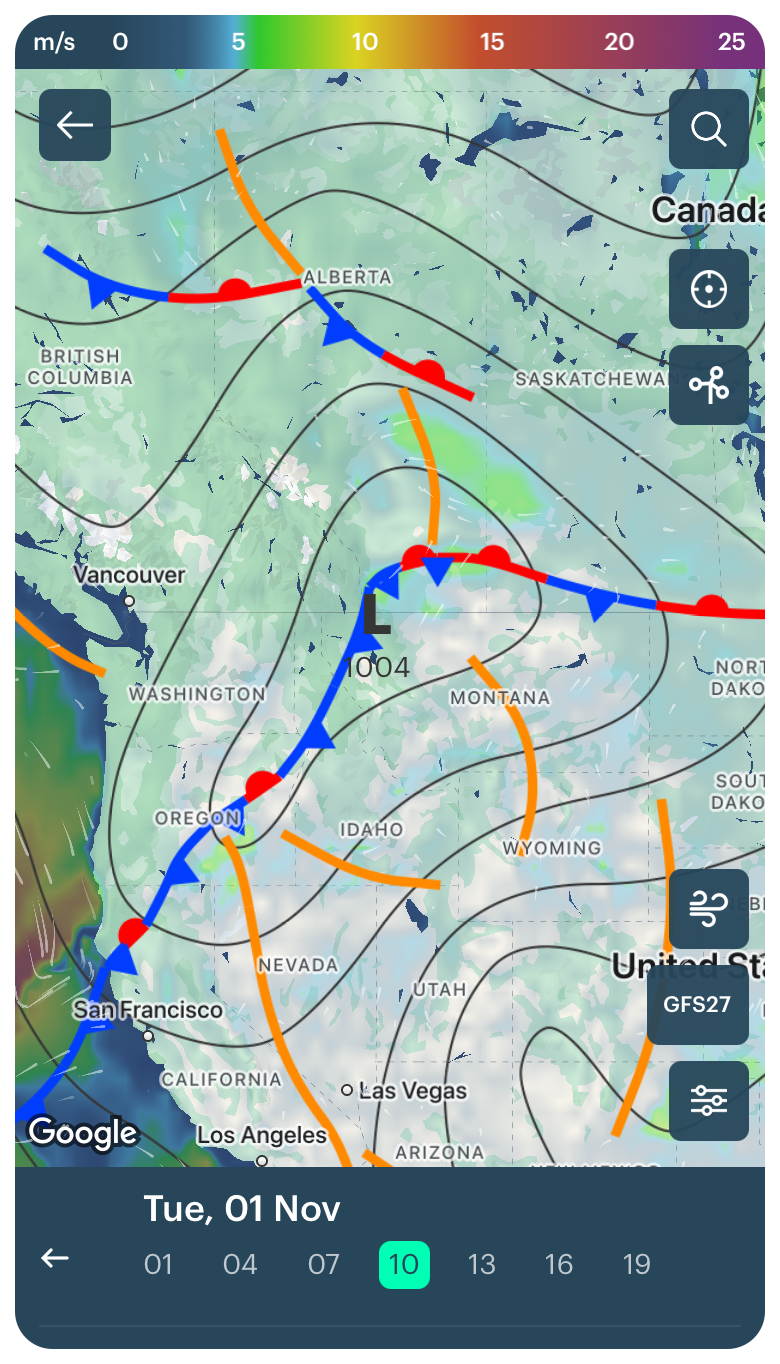 This is what a cyclone (L — low atmospheric pressure area) looks like on a synoptic map in the Windy.app for iOS

Another important element of a synoptic map is atmospheric fronts, narrow borderlines between air masses of different temperatures. If cold air is moving toward warmer air, it's a cold front. If warm air is moving towards colder air, it's a warm front. After a cold front has passed, it normally gets colder, after a warm one, warmer. Dangerous weather events, such as wind gusts, thunderstorms, tornados, and icy spots, are often associated with atmospheric fronts. Atmospheric fronts are very active in cyclones, and almost non-existent in anticyclones. 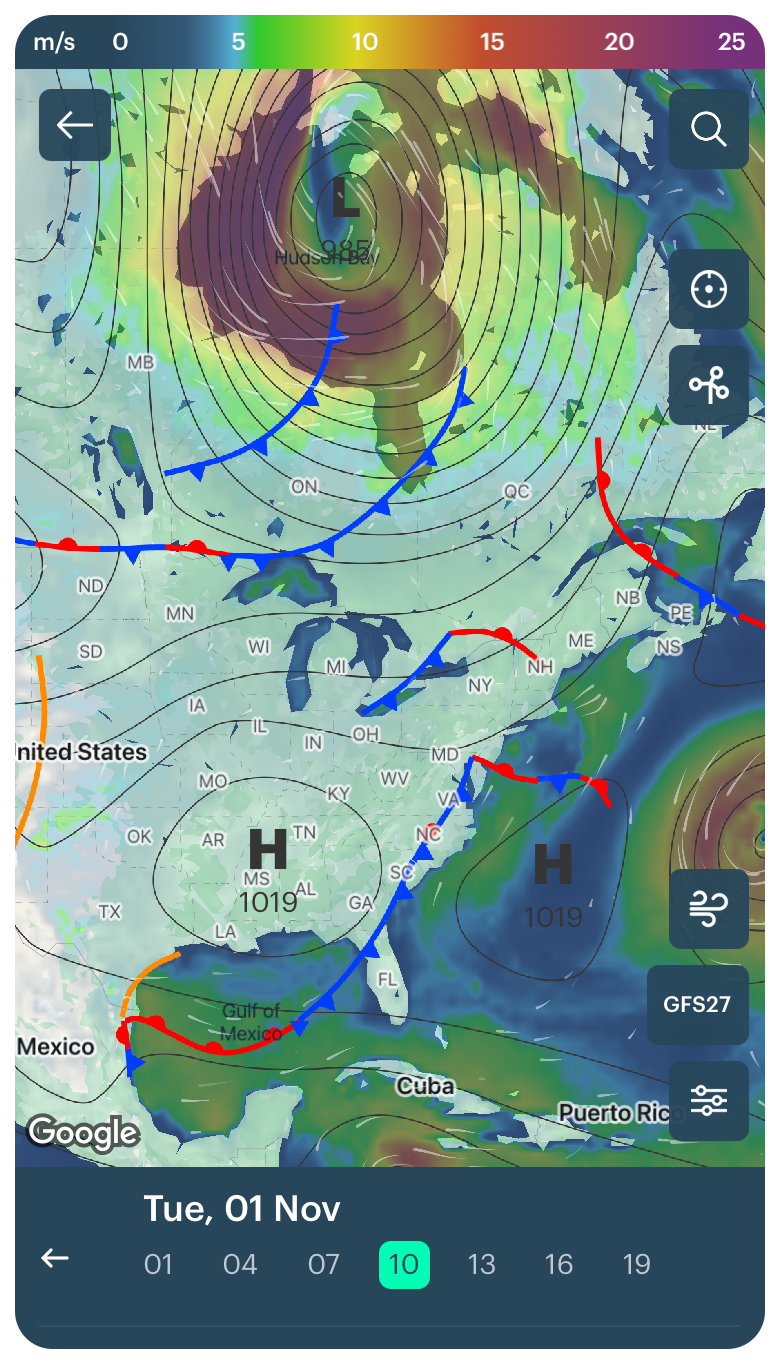 The simplest synoptic map: an anticyclone, a cyclone, and atmospheric fronts. Cold fronts are marked with blue, and warm fronts with red / Windy.app

All the other elements of a synoptic map are optional. But on demand, for more readability, we can add a lot of useful information. For example, we can show gusts of wind or precipitation zones.

So why look at a synoptic map? Let us give you an example. Imagine a short rain is forecast for tomorrow, but the weather is expected to be mostly clear. You decide to go for a bike ride, and you are caught with your bike in the middle of nowhere in a thunder and wind storm. After that, the sky is quickly covered with thick clouds, and the rain gets much weaker, but goes on and on. Nothing pleasant about it, is there? The opposite can also happen: you decide that you'd better stay home, but the rain never actually comes. Why does this happen?

The reason is that the meteorological forecast model predicts weather in specific “spots” (sites), just like our app. This forecast is, however, not very precise: for instance, a cumulus cloud can appear 100-200 km away from the place where the model predicted it would form (and you stayed home to avoid getting wet). Or it can end up being much bigger than expected, and cause dangerous phenomena that the model didn´t predict. For a weather forecast, these errors are not very significant, but for an actual person at an actual location, this forecast feels absolutely inaccurate and completely useless.

A synoptic map helps you understand how much you can trust any given weather prediction.

How to read a synoptic map?

There are two types of synoptic maps: analysis maps and forecast maps:

The Windy.app has both types of weather maps. 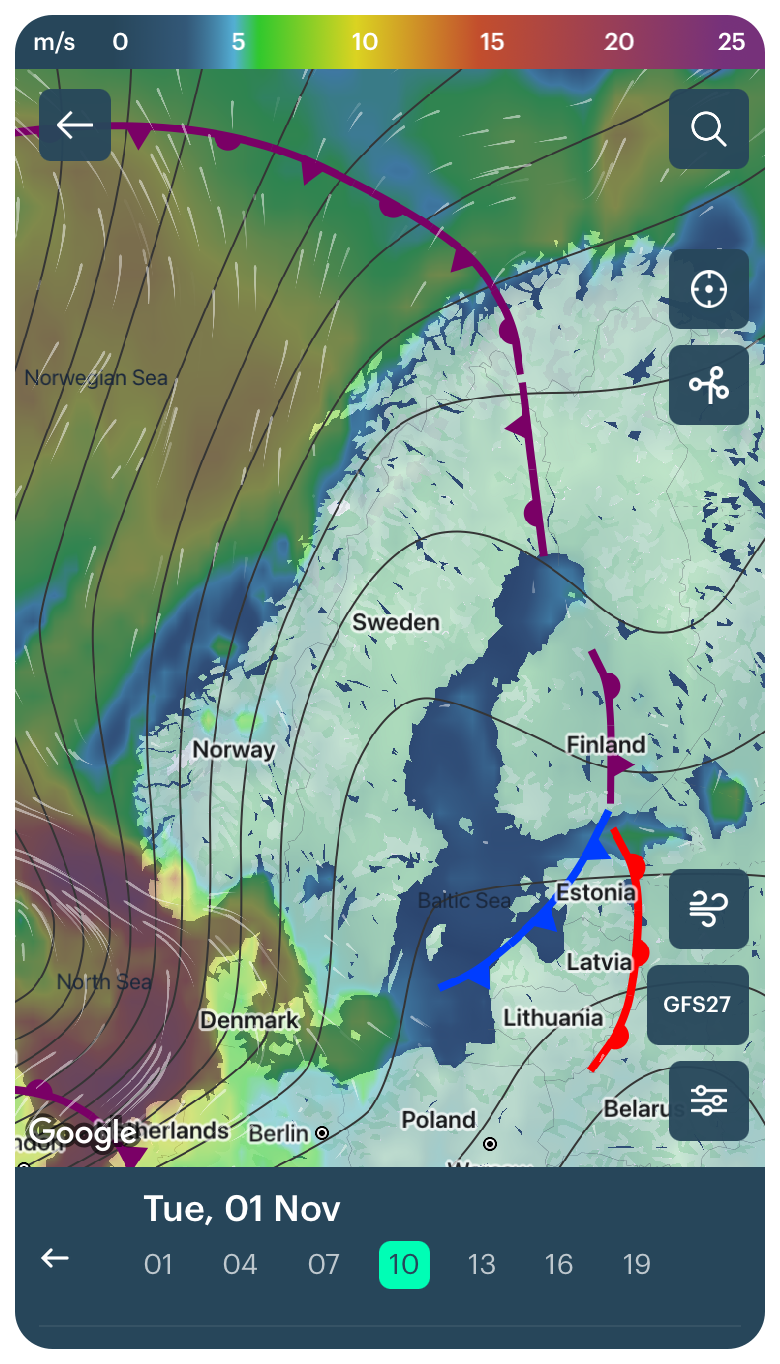 Aside from the cold and the warm fronts, the synoptic map shows occlusion fronts, which are places where cold fronts overtakes warm fronts, and are marked in purple / Windy.app

By the way, analysis maps also work for predicting the weather. The thing is, synoptic processes are not very quick. If you look at the freshest analysis map, and then at a couple of the previous ones, you can certainly imagine where the cyclones, the anticyclones, and the fronts are going to move the next day.

There are a few important rules you need to remember to read a synoptic map successfully. Let's discuss them in a bit more detail: 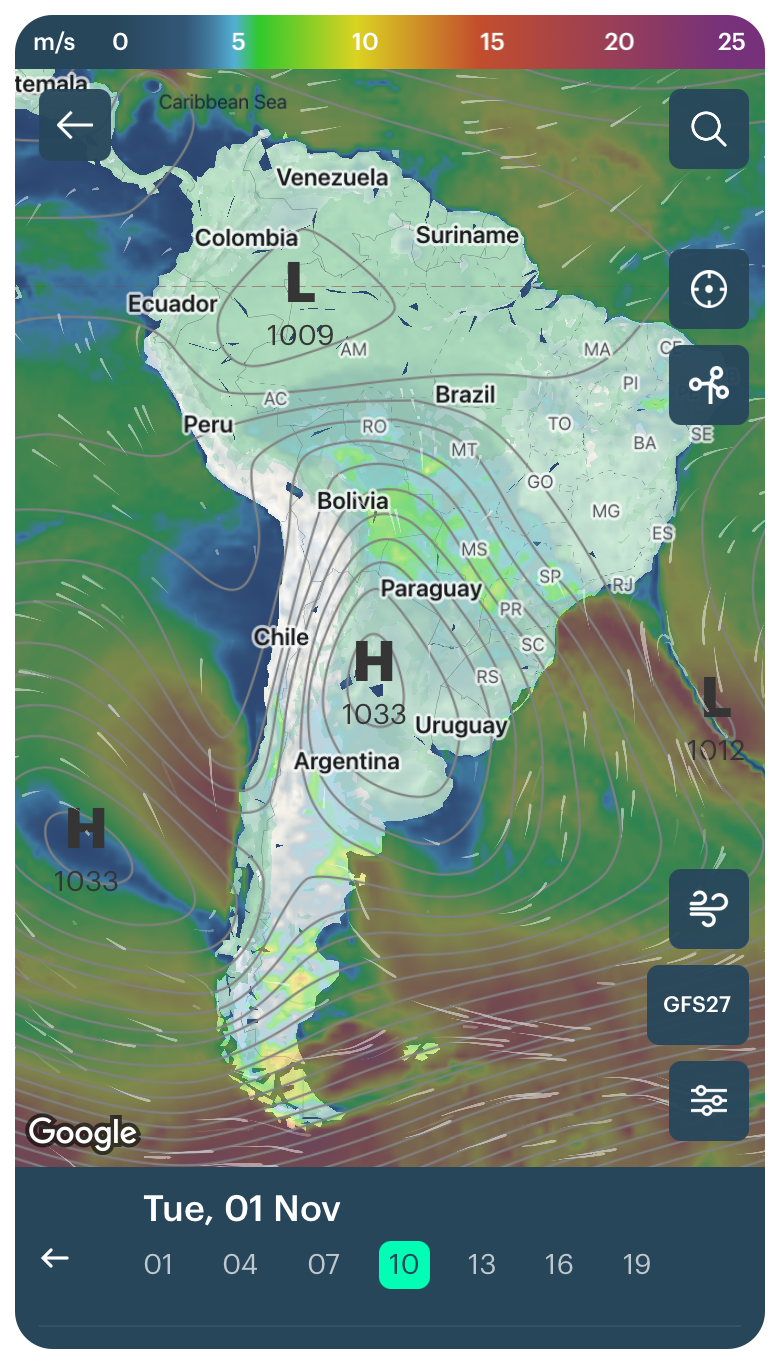 Here, areas with a long (top) and short (bottom) distance between isobars are clearly visible. The most active weather processes will take place at the bottom of the map / Windy.app 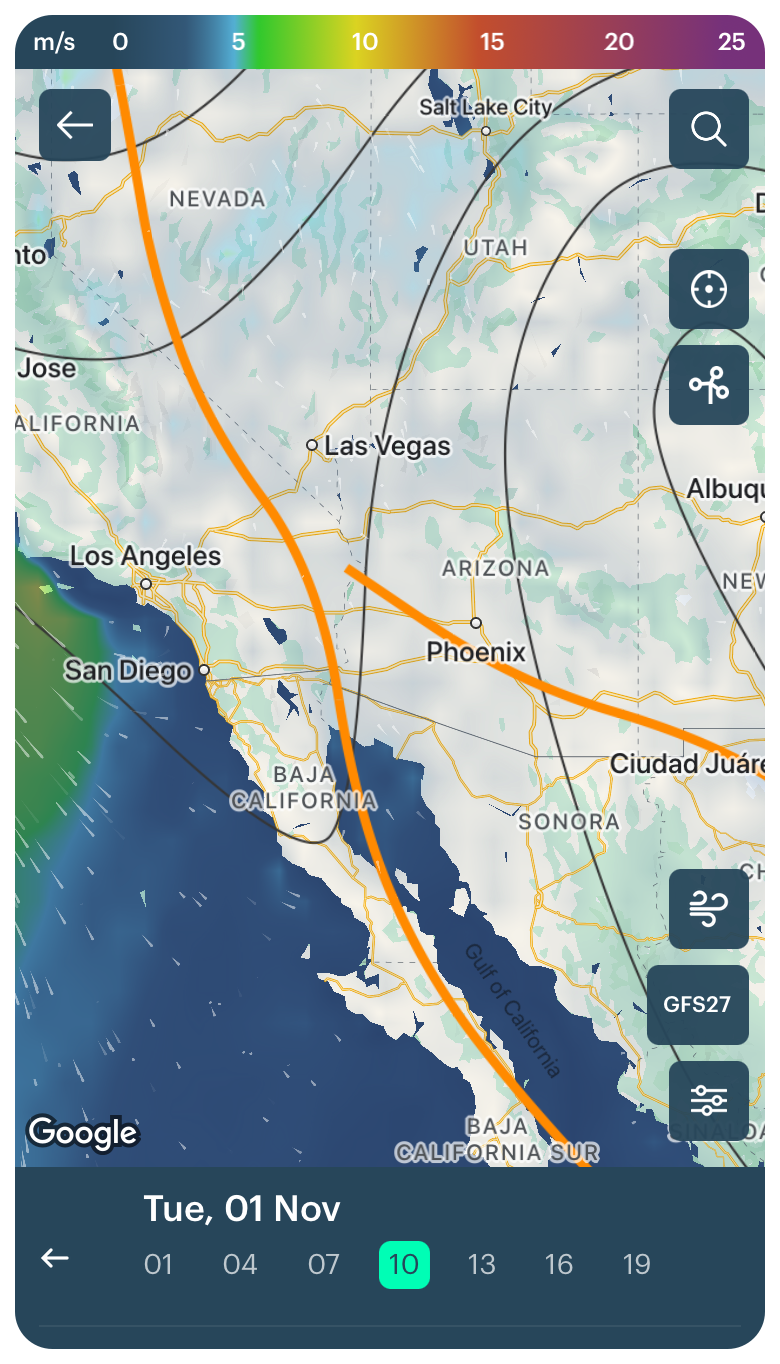 A very long trough on the weather map in the Windy.app for iOS 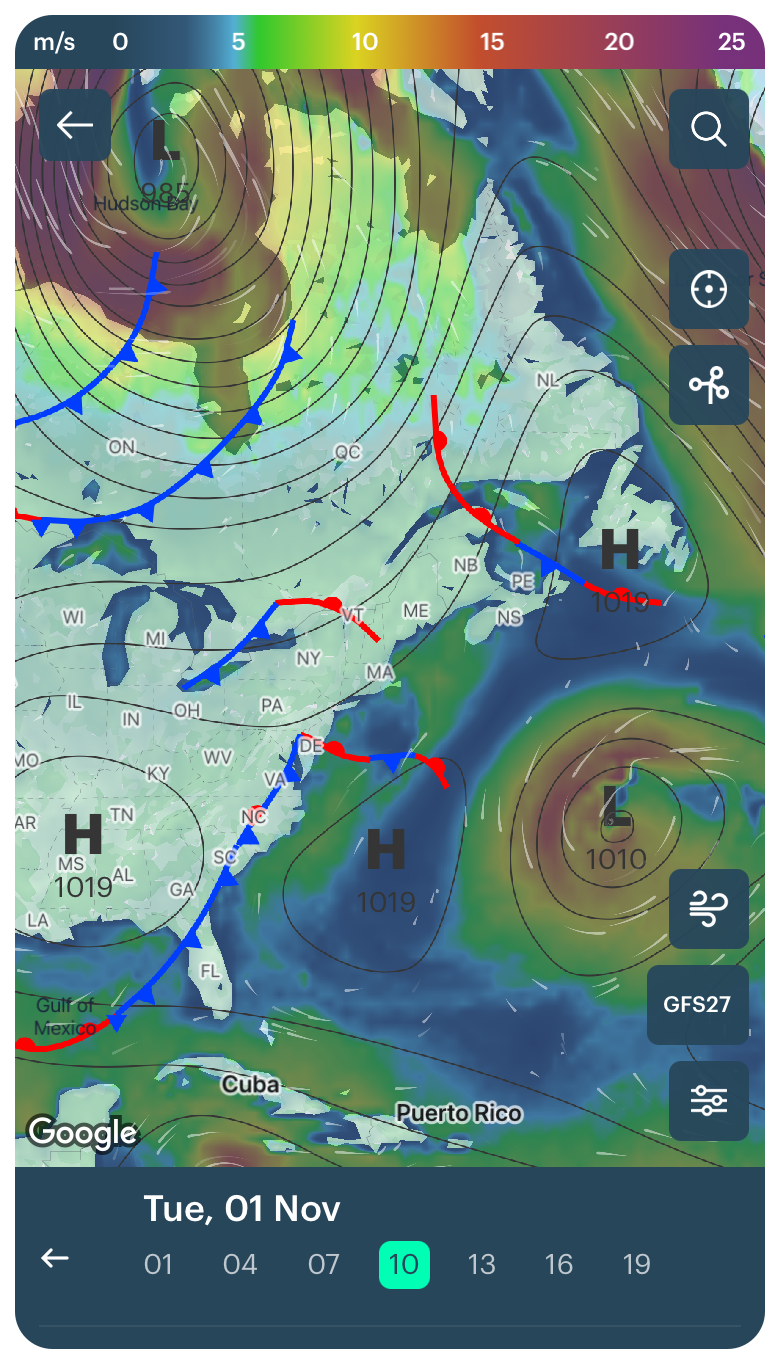 You can see that Eastern Coast of North America is covered with cyclones, with many warm and occlusion fronts / Windy.app

So, at the end, how exactly do you use a weather map? Let's say, you saw a nice sunny day is forecast. Look at the map: if you are in the middle of an anticyclone, then it will most certainly be the case. If there's a front moving towards you, and the model is still predicting good weather, weigh the risks, and decide if you can afford them. This is most important for meteorosensitive activities (such as mountain hiking), where bad weather can be life-threatening.

There is no doubt that you can´t go without prognostic models to make a weather forecast. However, a synoptic weather map is an important source of valuable information that is always nice to have.

Where to get a synoptic map?

In the Windy.app you can access a synoptic map from three places: 1). Home screen of the app, 2). Spot screen, and 3). Weather Station screen.

To get weather fronts and isobars on the map, activate the namesake Atmospheric Fronts and Isobars feature in Weather Map Settings. 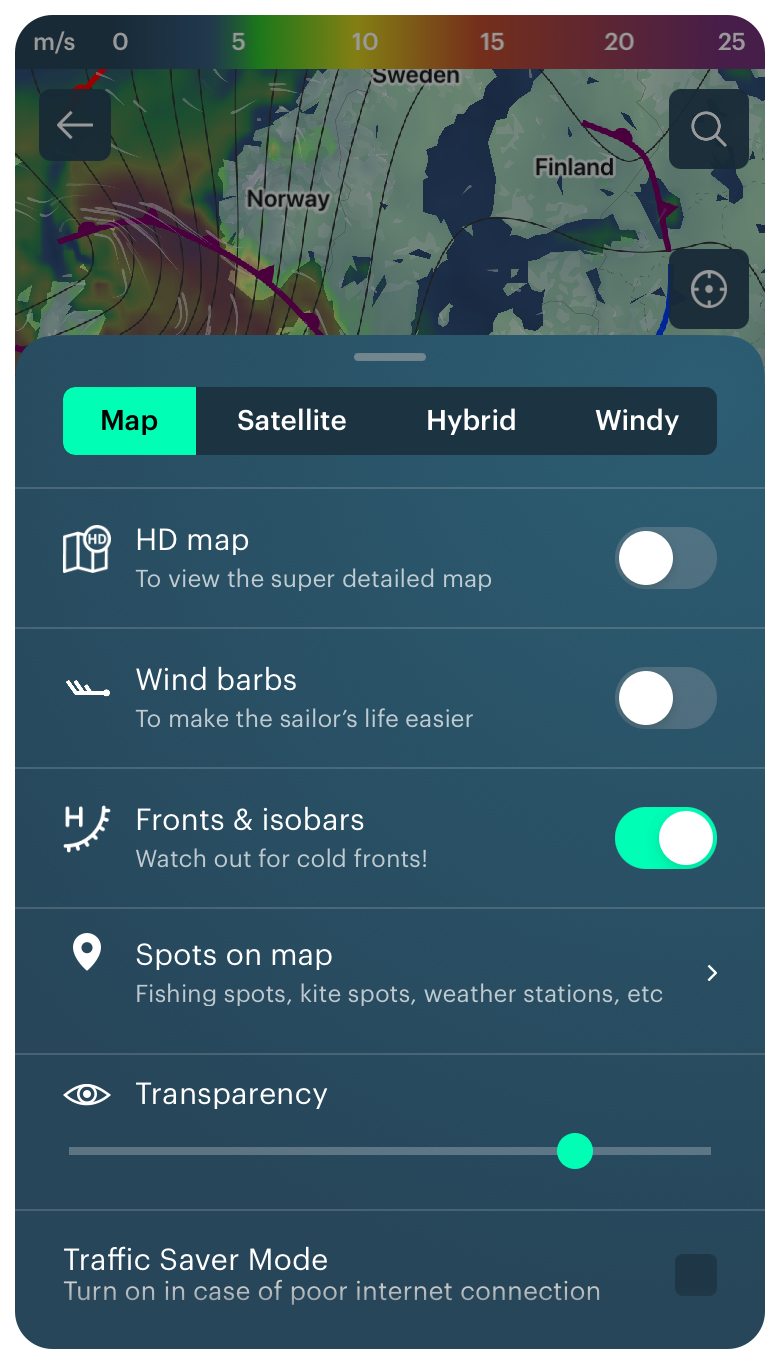 Weather Fronts and Isobars in the Windy.app for iOS

There is also a wind map on the Windy.app site similar to one you see in the app. For now it has just one wind layer but we are working on implementation of others.

Learn more about reading weather maps in the Windy.app blog.

Text: Eugenio Monti, a meteorologist and a climatologist