How ozone holes are formed

There are many examples of the negative human impact on the climate of our planet. One of the most pressing issues is the ozone hole. Today we will look at what ozone holes are, how they appear and how dangerous they can be.

First, let’s have a quick look at ozone. Ozone in the atmosphere is a pale blue gas with the chemical formula O³, which means that ozone is made up of three oxygen atoms. In contrast, the oxygen we breathe consists of two atoms.

There are a number of ways to make an ozone molecule, but in the atmosphere, ozone is almost always formed naturally from oxygen. It breaks down into atoms, which then combine to form ozone. There are two conditions for this:

Ozone is a relatively unstable molecule and, once formed, it breaks down into atoms again within a matter of minutes. Ironically, ozone molecules are constantly formed and destroyed by UV radiation, creating something best described as the “ozone cycle”.

Ozone layer above the Earth

Oxygen actively absorbs UV radiation coming from the Sun. At higher altitudes (over 30 km), where the number of oxygen atoms is very low, ozone isn’t formed. But in the stratosphere (an altitude between 20-30 km) the air is quite dense and contains enough oxygen atoms for stable chemical cycles. This is where ozone is produced and destroyed by UV radiation, and within these reactions, it absorbs the radiation.

Almost all UV radiation is absorbed by ozone in the stratosphere, and it never reaches the Earth’s surface. It explains why there is very little ozone near the surface. The region of the Earth’s stratosphere where ozone is produced is called the ozone layer. Ultraviolet radiation, which is absorbed by ozone, is detrimental to all living creatures, so ozone protects us from its negative impact.

The ozone hole is where the ozone concentration in the atmosphere over any area drops below 220 units. 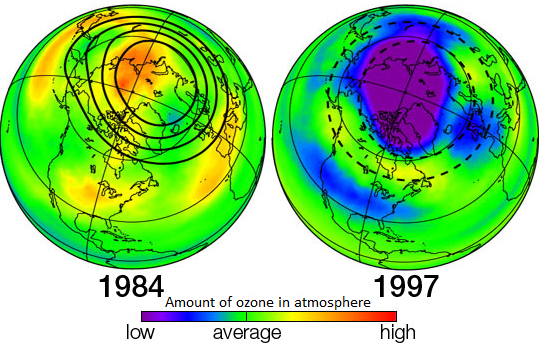 How do humans affect the ozone layer?

The natural enemies of the ozone layer in the atmosphere are freons. These are compounds involving hydrogen and fluorine used in cooling systems, solvents and other technical spheres. Once in the atmosphere, these substances react with ozone and leads to the ozone being destroyed, and freons keep reacting with ozone over and over again. This is what makes freons so harmful: once in the atmosphere, one freon molecule can destroy the Earth’s protective ozone layer for many years! Freons that contain chlorine are considered particularly dangerous.

Where were the ozone holes discovered?

Ozone holes typically appear over the polar regions in early spring: in March in the northern hemisphere and in September in the southern. The situation in Antarctica is particularly alarming due to air circulation: there is a huge vortex in the stratosphere above Antarctica known as “circumpolar”, which means “rotating around the pole”. If some substances get into this they are “locked” inside and cannot come out. This whirlwind is particularly strong in winter. Freons flow into it, destroying a thin layer of ozone at the end of winter creating ozone holes. There is a similar vortex over the northern hemisphere but it is much weaker, so there is less accumulation of freons and, as a consequence, ozone holes are much smaller. Ozone holes are often associated with a rare and spectacular weather phenomenon — nacreous or “mother-of-pearl” clouds shimmering with all the colours of the rainbow.

Nacreous clouds are seen in the polar regions in winter and spring, usually in those places where the ozone layer is thinnest. However, it is not yet entirely clear how exactly they are related to ozone holes. 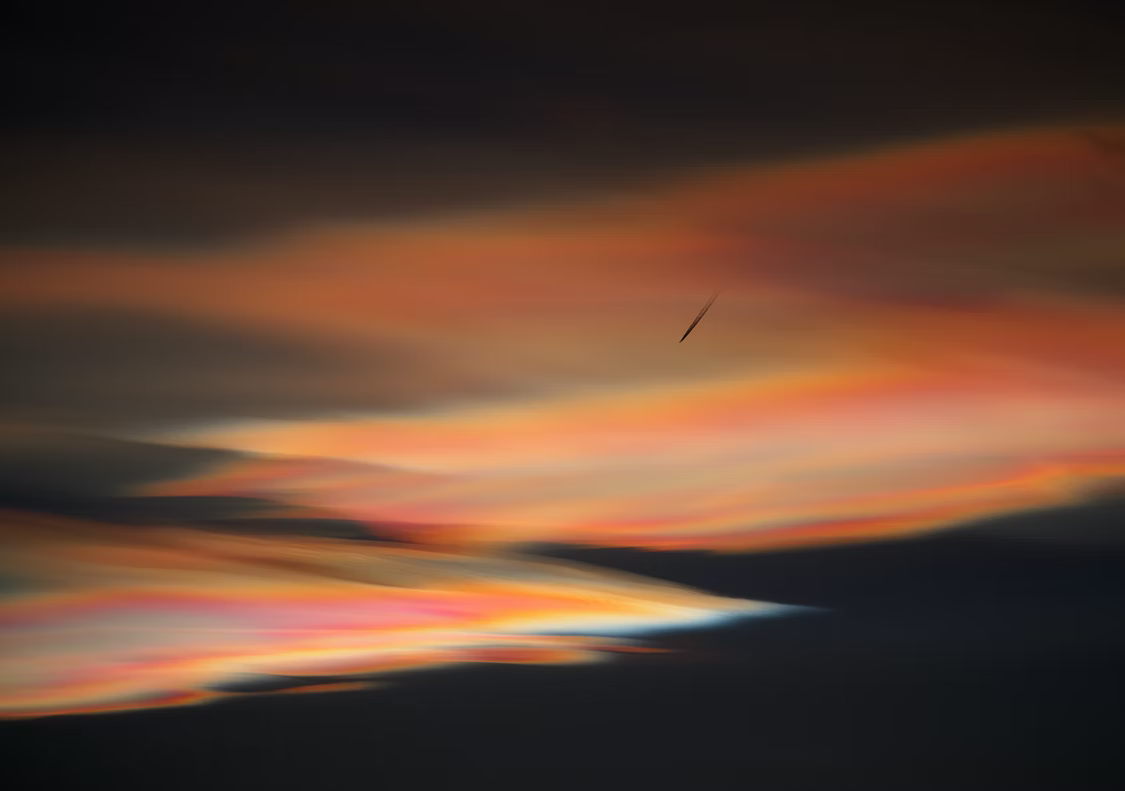 Why are ozone holes dangerous?

Ozone holes are dangerous because they let through a high dose of life-threatening ultraviolet radiation from the Sun. This radiation causes the destruction of body cells, increasing the likelihood of mutations and malignant tumours. In a way, we are lucky that the biggest ozone holes are observed in places where no one lives. Having said that, the ozone hole over Antarctica could affect parts of the southern hemisphere, particularly the southern parts of Argentina and Chile where incidents of skin cancers are increasing.

Ozone holes in the northern hemisphere also pose a similar risk despite their relatively small size. 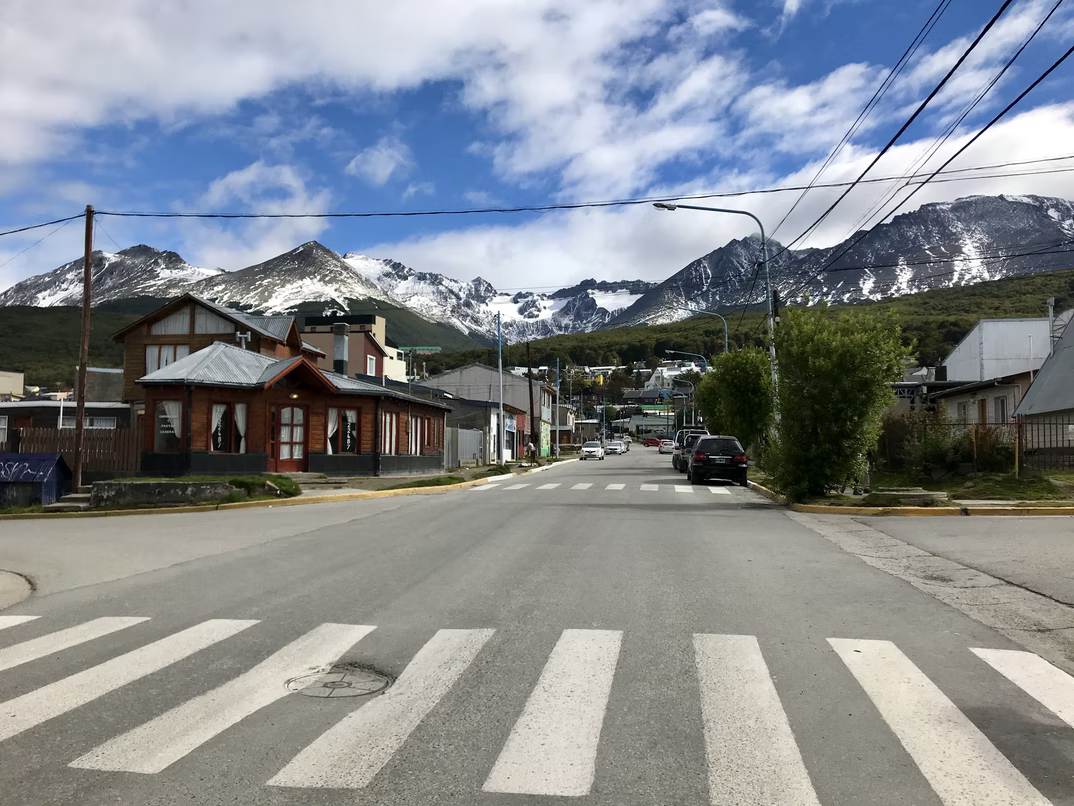 How could we “fix” the ozone layer?

It might sound incredible, but humanity has already done a lot to help rebuild the ozone layer. In 1987, most countries ratified the Montreal Protocol. It contained a list of ozone depleting substances and required signatory countries to replace them with harmless analogues. As countries gradually fulfilled these obligations, the size of the ozone holes around the world really began to shrink. Unfortunately, due to the long life of freons, the ozone layer recovery is extremely slow. Many scientists remain optimistic: by the middle of the 21st century, we can expect a near complete recovery of the ozone layer.

Explore the different types of clouds

What are the phases of the moon