The moon is Earth’s (only) natural satellite, and it is the second brightest celestial body after the sun for humans.

Of course, you already know that the moon does not always shine the same way — it has different states. But then the question arises: what are these states, to which not everyone will answer exactly, except for the full moon or the absence of the moon in the sky.

In this long but simple lesson, we will understand what are the phases of the moon or lunar phases, and how to read them, as well as the overall effect of the moon on the earth and people, including some outdoor activities such as fishing and surfing.

What are the phases of the moon and how do they affect the earth?

Although the moon is the brightest celestial body at night, it does not know how to glow itself. In short, figuratively speaking, the moon is a large mirror into which light from the sun is reflected. We never see the entire moon, only the side that is illuminated by the sun. The backside of the moon is called the reverse side, or the dark side because it is always hidden from our eyes.

The moon, being shaped like a sphere, is illuminated by the sun in different ways, depending on its position in its orbit. This illumination varies from 0% to 100%, which is what is called the phases of the moon or lunar phases.

The shape and position of the Moon are constantly changing. This process is cyclical. People began to track and record the movements and various positions of the Moon, and thus the first lunar calendars appeared, in which the phases of the Moon were described. At first, they had a great sacral meaning, supposedly they influence the emotional and physical health of people. In some countries, such as China and Thailand, some people live by the lunar calendar.

The direct effect of moon phases on humans has not been scientifically proven, although knowing the phases of the moon can also be useful for sports such as sailing, fishing, surfing, or even hiking if you view the moon as a light source (it is). In particular, in fishing, there is the Solunar theory about the behavior of fish and other animals depending on the phases of the moon. But we’ll talk more about the effect of moon phases on people who are doing various outdoor activities in a separate blog article. 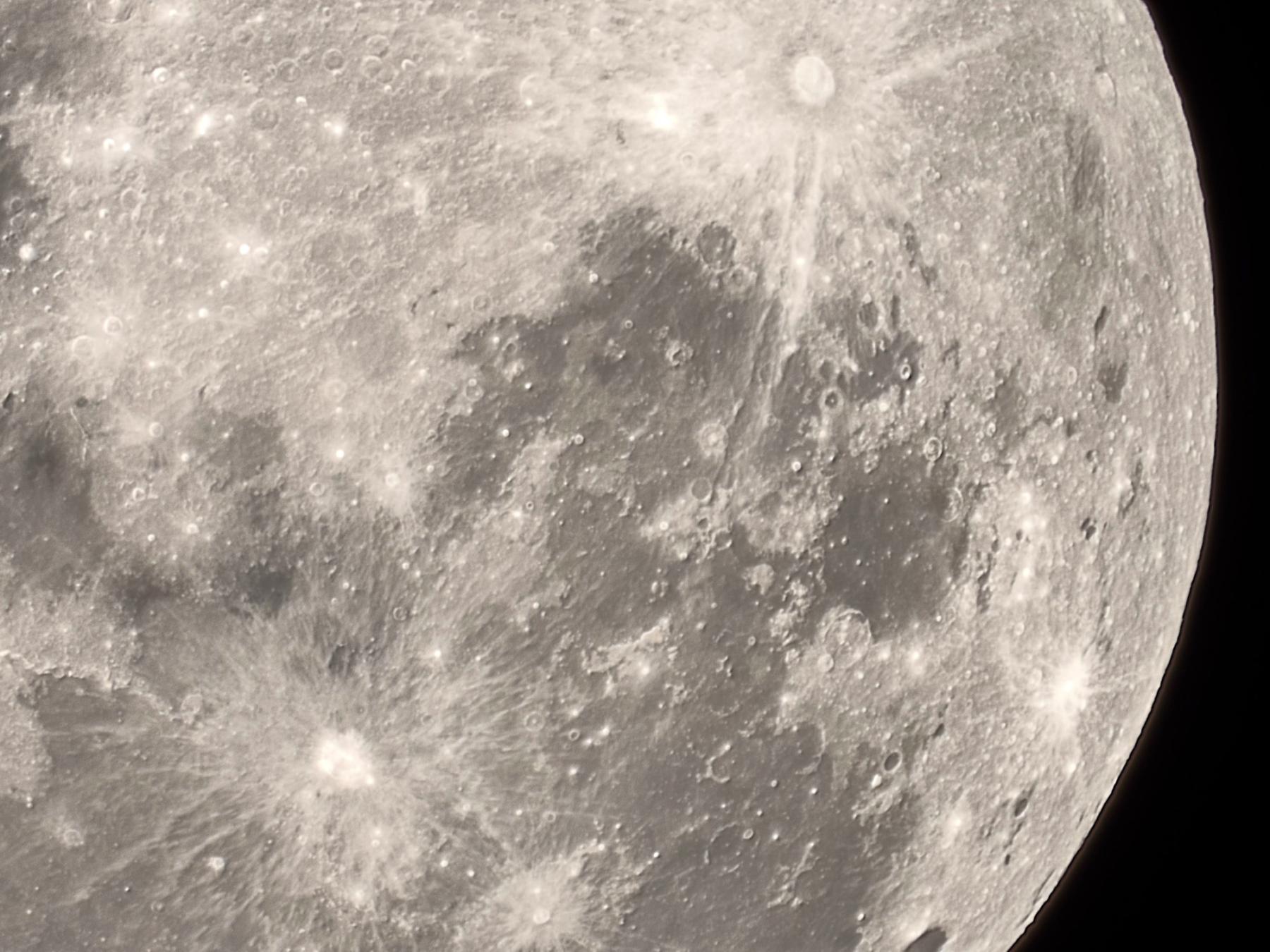 Bright side of the moon visible to people. Michael / Unsplash

Opposite, the influence of the moon and its phases on nature are obvious. In fact, it is one of the main reasons why the earth exists as we know it. Specifically, the moon has two main functions in relation to the earth:

Tides as one of the important natural parameters for active recreation should be mentioned separately.

So, the Earth is affected by the gravitational forces of both the Moon and the Sun, but the farther the object is located, the less influence it has. Accordingly, since the Moon is only a several hundred thousand kilometers from the Earth (384,400 km to be precise, and the distance to the Sun is 150,620,000 km — 391.8 times further), it plays a greater role in changing water levels: every 24 hours, the Moon generates two large tidal waves, pulling the Earth’s water surface into a rugby ball shape, thereby generating two high tides and two tides in a day.

However, when the Moon, the Sun, and the Earth “freeze” in line (this is the reason for the new and full moons — two main phases of the moon about which you will learn below), the gravitational forces of the Sun and the satellite add up, thereby significantly changing the level of the global ocean. This type of tide is called a syzygial tide or syzygy.

In other words, in many ways, the Earth exists as we know it because it has a natural satellite, the moon.

How to read eight moon phases?

Reading the phases of the moon is easy. To do this, you just need to understand the principle of phase change, and their sequence and remember their names, as well as keep in mind some geographical and natural nuances, because the moon phases are different in different parts of the earth. So, there are a total of eight phases of the moon: 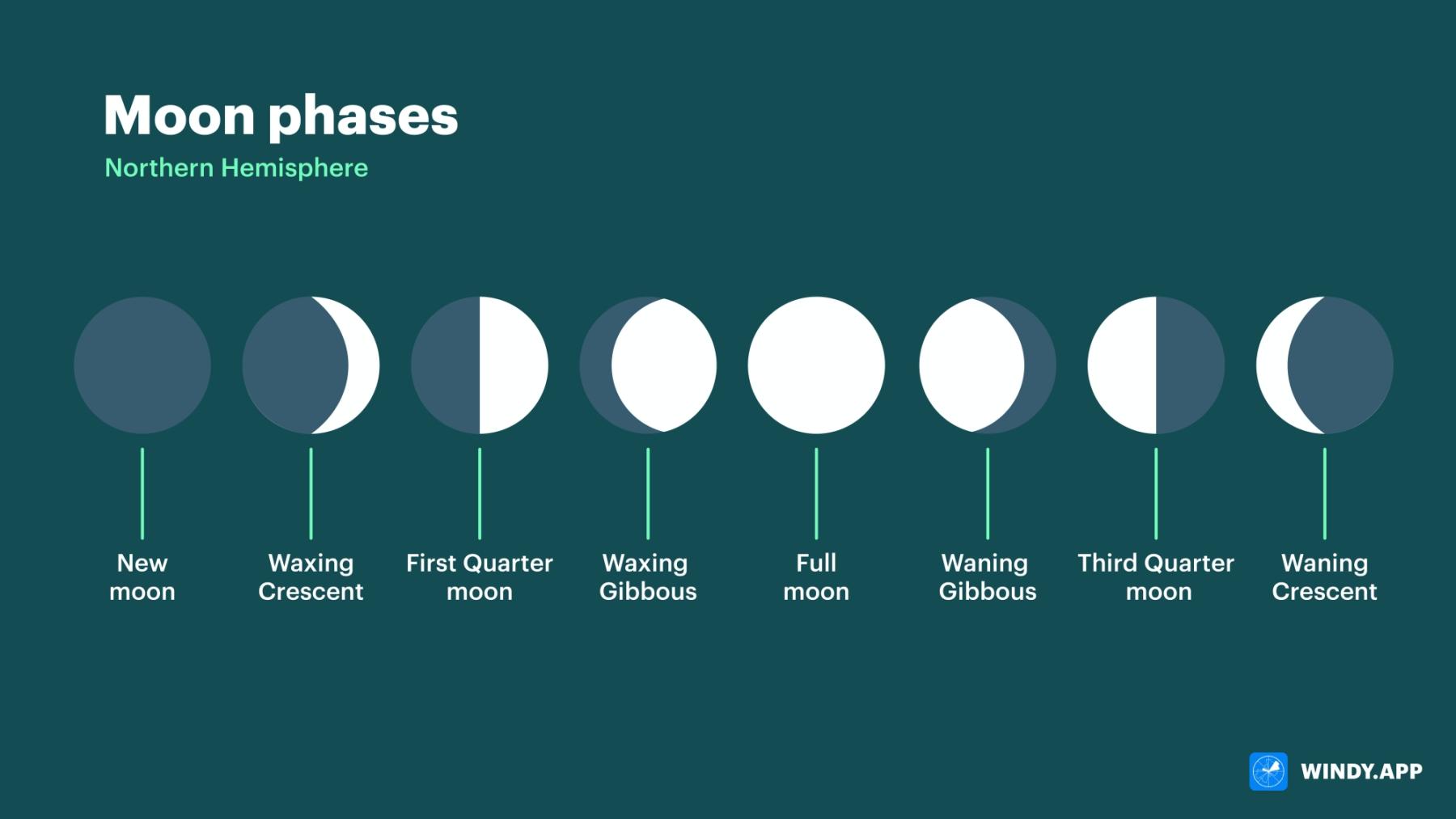 Then the New Moon appears again and again...

It is important to note that the appearance and waning of the moon from right to left is characteristic only of the Northern Hemisphere. That is, assuming the observer is located in this part of the world, the right side of the moon is the part that is always rising. The illuminated side of the moon always points toward the sun, even if it is hidden below the horizon. However, this is not the case in two other major geographical parts of the world: 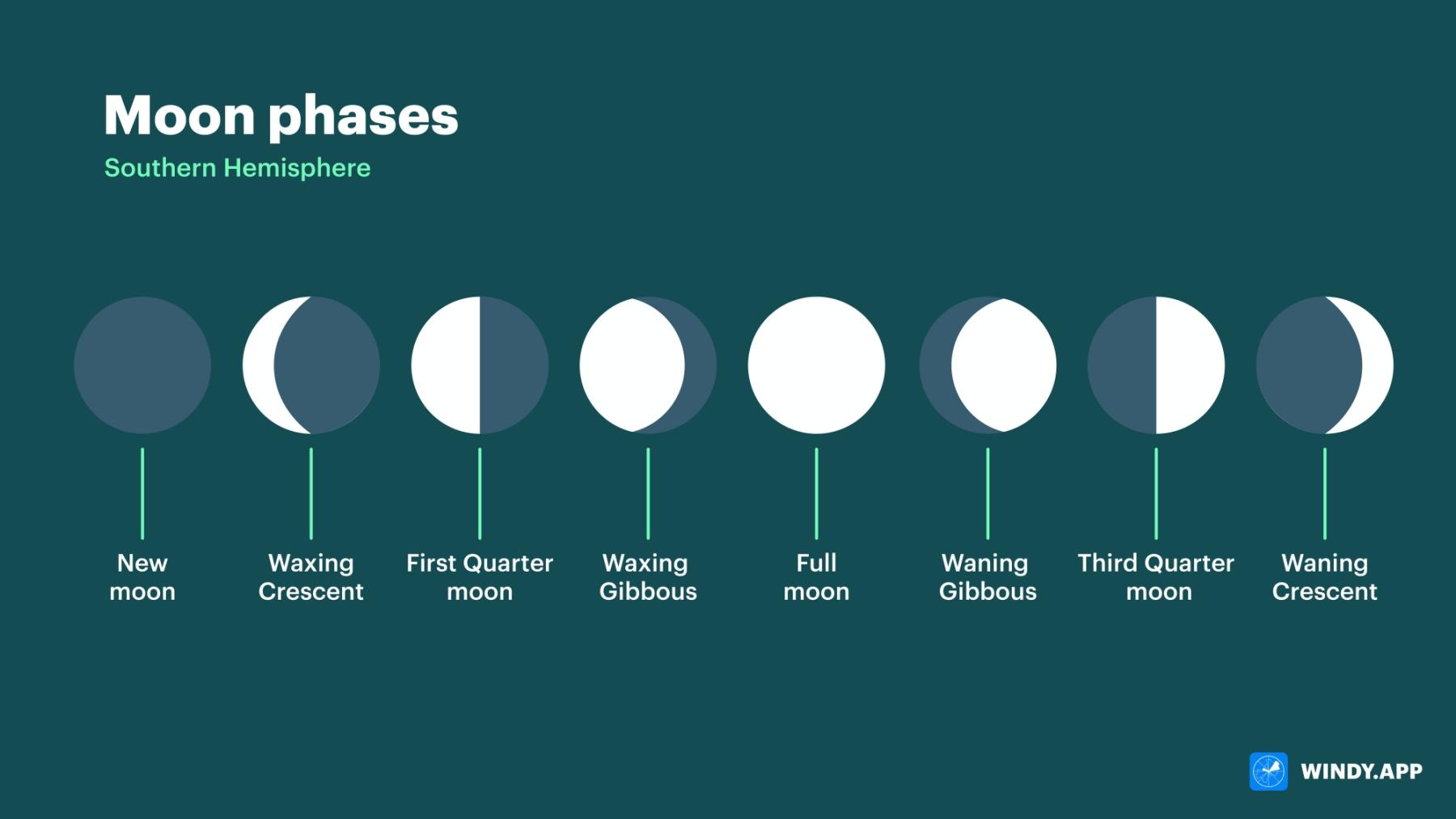 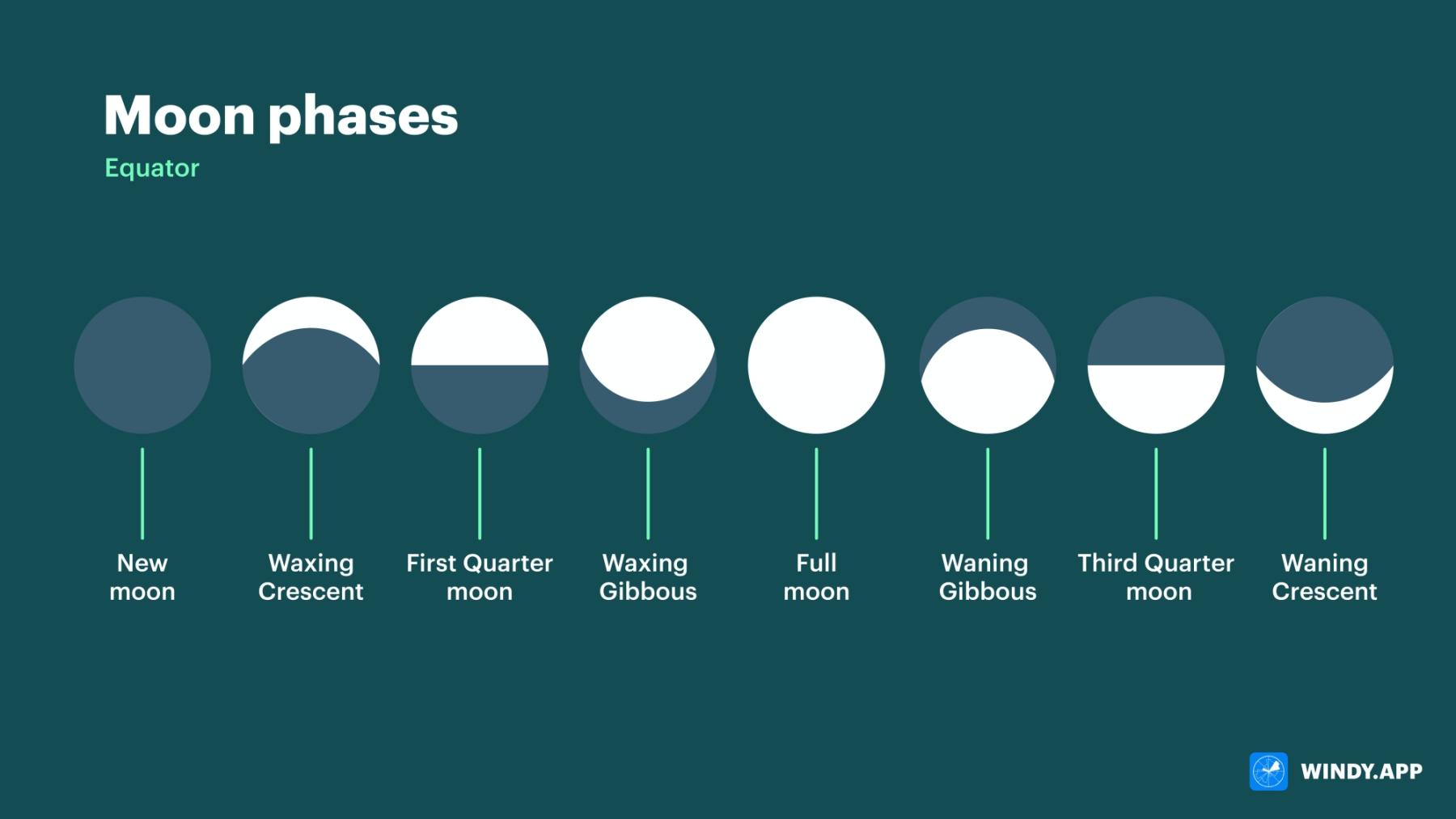 The eight phases of the moon are also divided into major and intermediate phases. The four major phases of the moon are New Moon, First Quarter Moon, Full Moon, and Last Quarter Moon, that is, the state when the moon is visible in its entirety, half of it, or not visible at all. Accordingly, the intermediate phases are the remaining four: Waxing Crescent, Waxing Gibbous, Waning Gibbous, and Waning Crescent when the moon is 1/3 and 2/3 visible on both sides, left and right, or up and down.

Usually, there is one full moon for each calendar month, but because the phases of the moon change slightly more often than 12 times a year, there is sometimes a second full moon in a month, called a Blue Moon. At the same time, each of the four "intermediate" phases of the Moon lasts about 7.4 days, but their duration varies slightly also due to the elliptical shape of the Moon's orbit.

Next, for those who miss the above, let's deal with each of the phases of the moon separately:

New Moon is the first phase of the moon when the moon is between the earth and the sun almost in a straight line, and it is turned to us by its dark side, so it is practically not visible in the night sky. The lunar cycle begins with a New Moon and lasts 29 days.

If it turns out that all three celestial bodies are absolutely on the same line, then we can observe such an astronomical phenomenon as a solar eclipse.

A couple of days after the eclipse, you can also see a faintly visible form of the moon in the sky, weakly illuminated by sunlight, which is reflected from the surface of the earth. This phenomenon is called an Ash Moon.

The Waxing Crescent is the first phase of the moon after the New Moon. The moon just appears on the firmament in the form of a narrow crescent. It is said: "A new moon is born". This phase lasts about three to four days.

The First Quarter Moon is the phase following the Waxing Crescent. It occurs 7 days and 9 hours after it and lasts about four to five days. During this period, we can observe the well-lit half of the moon in the sky, to which we can mentally draw a stick and get the letter "P". P is for the First Quarter Moon.

The Waxing Gibbous is the last phase before the Full Moon. The semicircle of the moon slowly begins to increase, covering more and more of the surface of the celestial body. This phase also lasts for three days.

A Full Moon is the fifth phase of the lunar cycle, in which the moon is on the side of the sky directly opposite the sun so that we can observe the entire surface of the moon in the form of a fully illuminated circle.

At the same time during the full moon for a few hours, the diameter of such a circle may visually increase slightly due to the fact that the moon ceases to cast a shadow. If it happens so that the moon exactly coincides with the shadow that the earth casts, then we can observe a phenomenon in the sky called a lunar eclipse. Lunar and solar eclipses are cyclical and occur every 18 years: during this period, there are 70 eclipses, 41 solar, and 29 lunar.

As a result, the moon grew smoothly for two weeks, and its peak was the phase of the Full Moon when we observed a perfect glowing ball in the night sky. Now for two weeks, the opposite process will take place: the illuminated surface of the moon will slowly decrease until it disappears from the sky altogether. 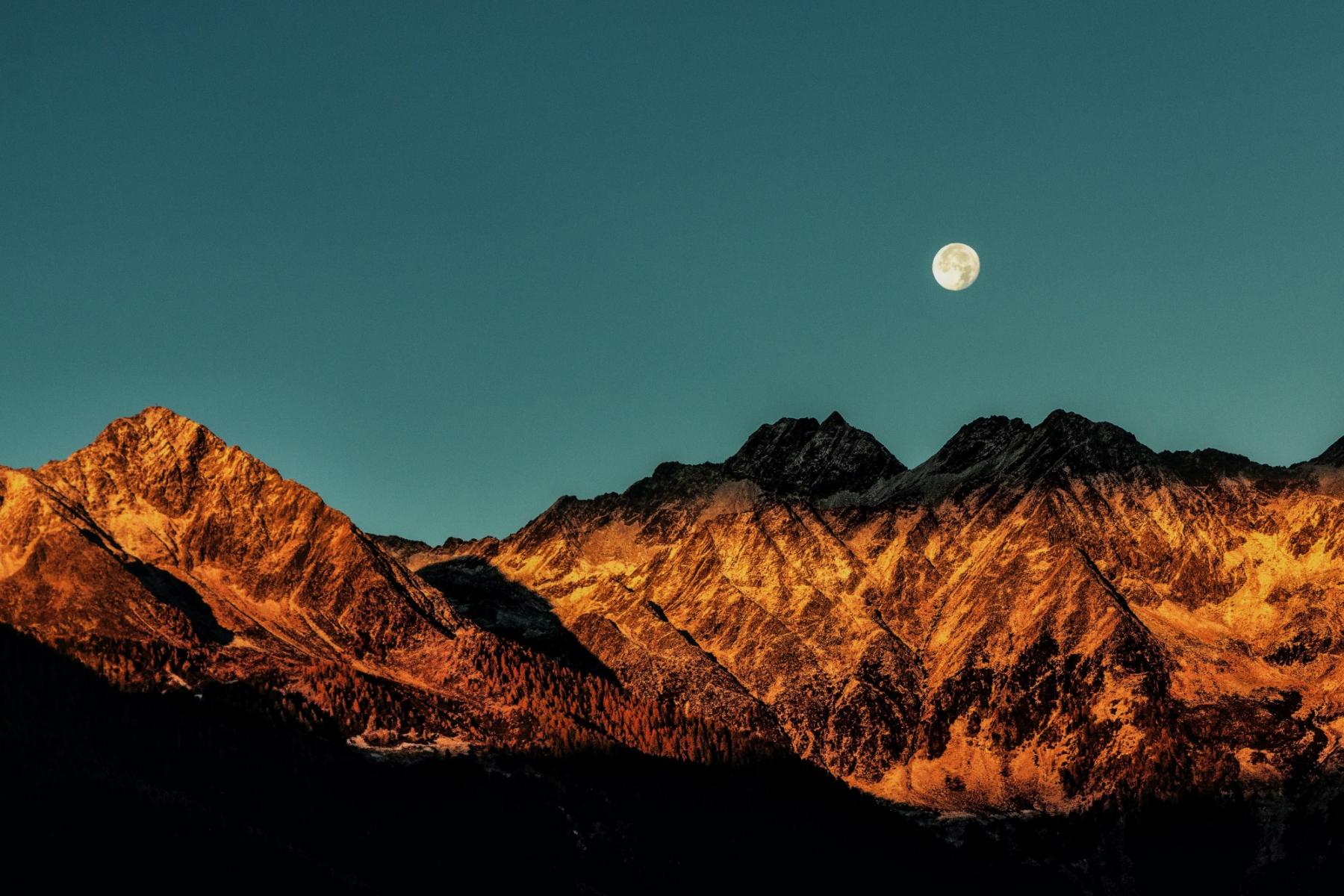 The Full Moon phase in the mountains. Eberhard Grossgasteiger / Unsplash

The Waning Gibbous is the first phase after the Full Moon. The moon becomes more diminished now on the right side (in the Northern Hemisphere, and on the left in the Southern Hemisphere), and within three to four days it will diminish until only half of its surface is visible, illuminated by the sun on the other side than in the first quarter.

The Last Quarter of the Moon is the phase following the Waning Gibbous, which occurs after 22 days and 4 hours after the new moon and lasts about three to four days. Even seven days after the full moon in clear weather, you will not visually find the moon in the sky in the evening because it will appear in the east closer to midnight in the form of a half-circle resembling the letter "C". C stands for the aging moon.

The Waning Crescent is the final phase of the lunar cycle that occurs 10 days after the full moon and lasts until the moon disappears from the dome of the night sky and enters a new moon phase. The thin sickle of the moon appears from behind the horizon just before sunrise, and in three days it disappears completely.

Where to get moon phases for my outdoor activity?

In the Windy.app, you can get the phases of the moon in the special Fish and Fish Pro weather profiles, which contain a ready-to-use set of weather parameters for practicing these and some other related sports. To activate the profile, do the following:

1. Open your favorite or nearest spot from the app's Home screen or the Weather Map. In the case of a nearby spot, activate the geolocation feature in the app's Settings first.

2. Select the Fish or Fish Pro weather profile through the icon to the right of the list of weather models below the wind rose.

3. Scroll down the forecast table a little bit and find the row with moon phases. The symbols correspond to those given in this article. 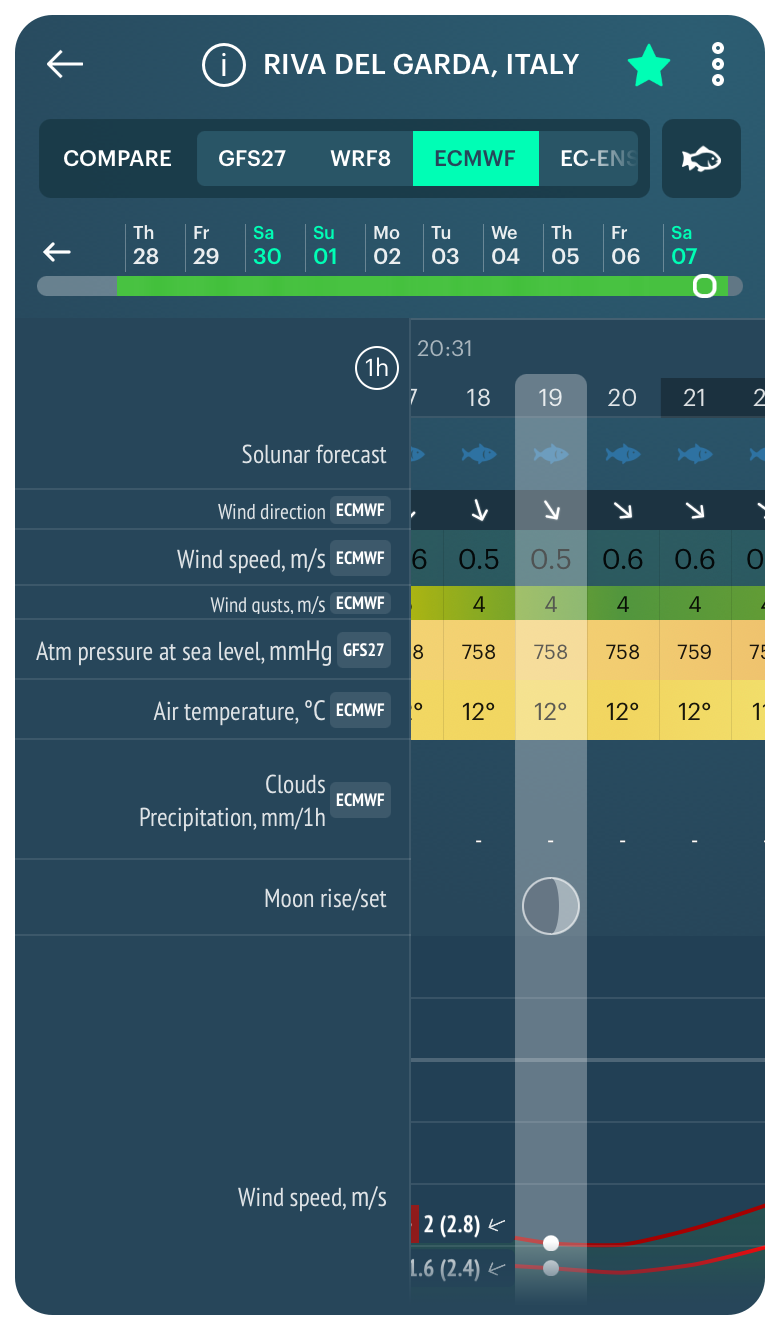 Phases of the moon in Fish weather profile in the Windy.app for iOS

Text: Masha Shapovalova, an author and web specialist of the Windy.app team. Her favorite sports are kitesurfing and alpine skiing

You will also find useful other lessons on atmospheric optics and space in the Windy.app Meteorological Textbook

How does the rainbow occur

Why do we see a halo — a circle around the sun

Where and when to look at the stars

How to determine your position by stars

How ozone holes are formed?