How the temperature changes in the Mediterranean Sea

Relatively similar conditions along the shores of the Mediterranean Sea have probably helped ancient civilizations to form close cultural and historical bonds. Despite the obvious similarities, however, there are plenty of differences, such as, the temperature of the water, which we will talk about today.

The average summer temperatures in the Mediterranean region are quite high, so the water evaporates quickly. Precipitation and the rivers that flow into the Mediterranean Sea account for only one-third of all evaporating water; and as a consequence, the sea gets the rest from the surface water of the Atlantic Ocean.

The Mediterranean Sea comprises two deep basins: western and eastern. The western basin includes the territory from Cape Trafalgar and Gibraltar, where the sea meets the Atlantic Ocean, to the strait between Sicily and Tunisia. The eastern basin stretches from the eastern coast of Italy to the coast of Israel, Lebanon and Syria.

Ice is probably the last thing you imagine when you think of Venice. It is extremely rare but it does happen.

The lowest water temperatures are found in the north of the Adriatic Sea close to Venice and Trieste, Slovenia. In February, the average water temperature there is as low as 5 °C (41 °F), and even ice occasionally forms in the Gulf of Trieste.

Generally, there is around 10°C range between winter and summer average temperatures in the Mediterranean.

It would be wrong to assume that the differences in water temperature are always dependent on their more northerly or more southerly location. The image below shows that the southern coast of France, particularly the Gulf of Lion, where Marseille is located, is significantly colder than the more northern, Italian part of the western basin. 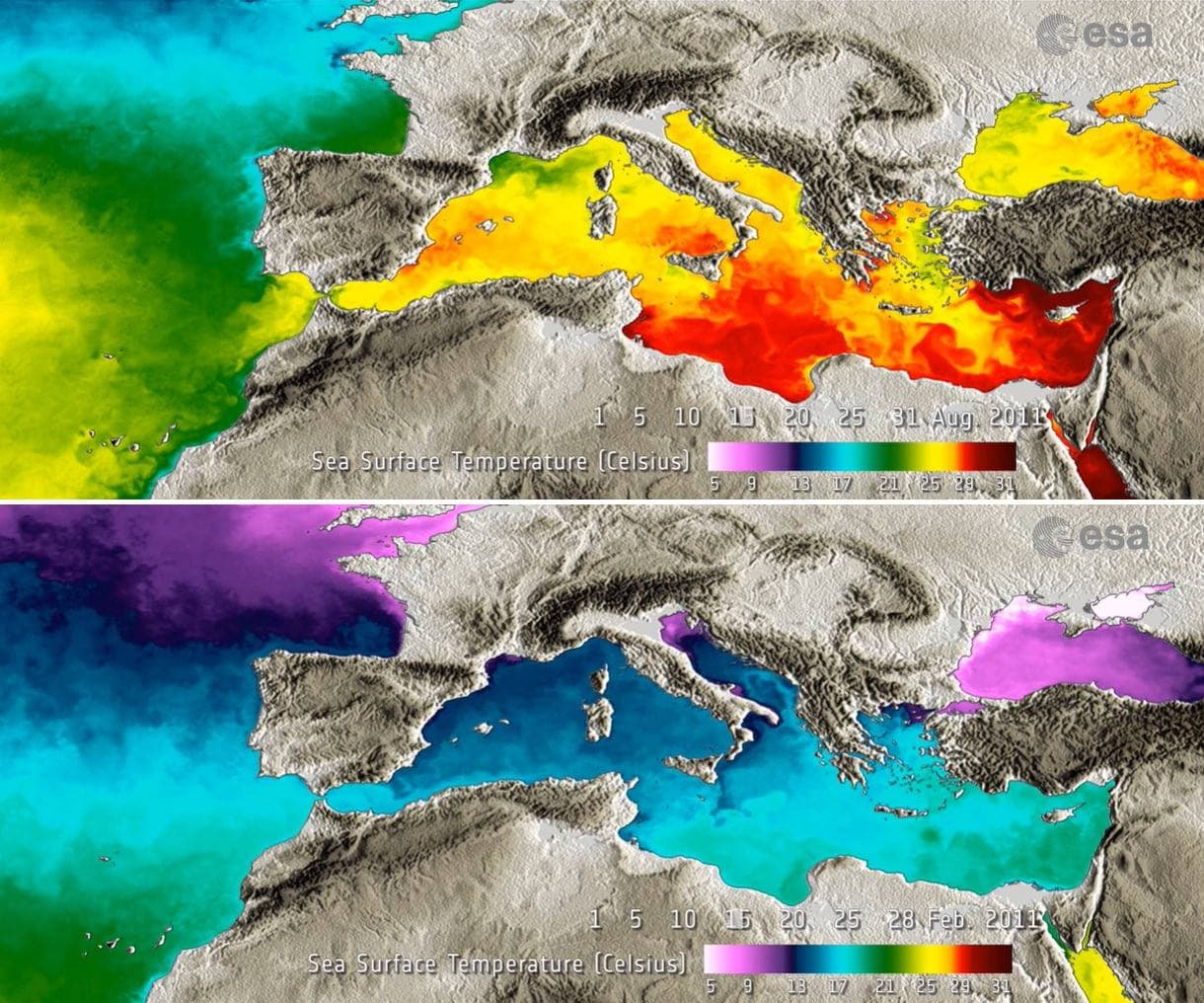 This is where the influence of currents comes into play. Warm water entering the sea through Gibraltar first flows along the northern coast of Africa and gradually reaches the Strait of Sicily, where it splits: a part of the surface water goes further east, while another part circulates along the western coast of Italy.

This relatively warm current gradually cools down. Italian shores are blessed with warm surface water but by the time the same water reaches the Gulf of Lion, it has already cooled down to the temperatures shown in the picture above. Another important factor that influences the temperature of the water in the bay include upwelling (strong winds drive warm surface water into the sea, forcing colder water to rise from the bottom) and the Rhone River, which flows into the sea here.

Complex currents, upwelling and other factors contribute to the temperature difference in surface water throughout the Mediterranean. Below you can see the average temperature in some regions of the sea by month.

What Is Thermohaline Circulation

How Do Bioluminescent Waves Occur