What is a brinicle — the underwater stalactite

You have probably heard of stalactites, icicle-shaped formations hanging from the ceiling of caves. A similar phenomenon can be found under water, in the oceans. Downward growing icicles which are formed beneath developing sea ice are called brinicles.

They can be seen in any sea covered with ice. Sea ice, in turn, is formed in many seas and oceans of the northern and southern hemispheres in winter. In the Arctic Ocean and off the Antarctic coast, it is present all year round.

To start with, we need to understand a very important property of water: the higher the concentration of salt, the lower its overall freezing point. Ordinary tap water freezes at 0°C because it’s relatively pure. Sea water contains salt and therefore freezes at about −2°C. If, however, a very large amount of salt is dissolved in water, its freezing point can easily reach −20° C (such solutions are called “brine”).

Sea water has another important property: when it starts to freeze, most of the salt it contains is released from the newly-formed ice. As ice forms, the water that has not yet had time to freeze becomes more and more saline. As a result, at some point, these remnants of unfrozen water become so saline that they can no longer turn into ice at this temperature.

Now let’s dive back into the ocean. When porous sea ice forms on the surface of the water, a concentrated salt solution, called brine, is released. It accumulates in small cavities inside the ice and remains liquid because the high concentration of salts results in a lower freezing temperature. When sea ice cracks (as it floats or its temperature changes dramatically), brine solution leaks out to the open ocean. Now we have the conditions perfect for the formation of a brinicle. 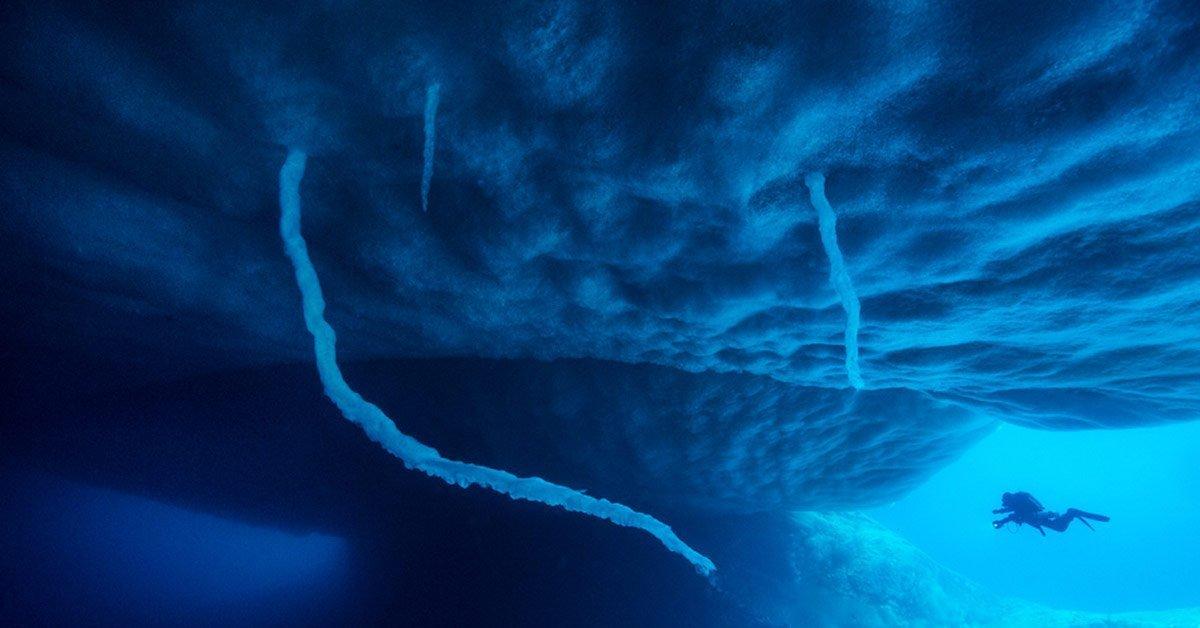 The process of formation of brinicles

Increasing salinity also increases the density of sea water. Since the brine is denser than the salty sea water and accordingly sinks, the brinicle starts to grow downward.

At this stage, it would be useful to mention that although brine is liquid, it has a temperature at which sea water already freezes (after all, brine was formed just as sea water started to freeze). It turns out that as the cooler brine moves down, it naturally cools the surrounding warmer sea water. The water temperature around the brine quickly reaches the freezing point, creating an icepack around it.

This icepack, in turn, releases concentrated saline solution which is then added to the total mass of the sinking cold brine. The denser brine continues to sink, the surrounding water continues to freeze around it. As a result, layer by layer “icicles” are formed. It would, however, be accurate to call them pipes of ice with a saline water flowing inside.

Under certain conditions, a brinicle may reach the sea floor. This can happen if: 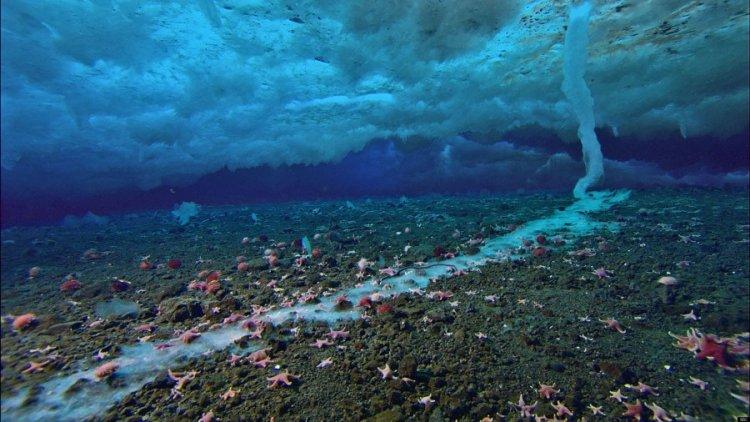 A brinicle that has reached the sea floor poses a real threat to the bottom-dwelling sea creatures. Once near the brine, they can freeze together with the surrounding water. Most often, slowly moving starfish and sea urchins get incased in an ice trap and ultimately freeze to death. They notice the danger when it is too late for them to escape from it.

Having sunk to the bottom, brine behaves like any other liquid spilled on a solid surface — it flows down the slope. The brine is still much colder than the surrounding water so it continues to cool the sea water, which, logically, continues to freeze. This is how a brine pool or a sea floor lake is formed.

Since the brine itself gradually warms up from the sea water and mixes with it, over time ice ceases to form. If the brine supply eventually stops, the ice that has already formed will slowly melt, which will mean the end of the brinicle life.

Snow and ice pellets — the other types of frozen precipitation

What are light pillars and how are they formed

Slush — the mixture of snow and water