What is a dust devil

Whirlwind swirling columns of dust, sand, ashes, leaves or anything else walking across the ground on a video usually up to two or three dozen meters high and up to several meters in diameter? They are often called “devils”. In this new lesson of the Windy.app Meteorological Textbook (WMT) and newsletter for better weather forecasting you will learn more about what dust devil is and how it works.

The name was first given to the dust devil, often occurring in deserts, and anywhere in general in hot, cloudless weather, when the ground gets very hot. You can see this whirlwind in the photo above.

There are also fire, ash, snow and other “devils”. All these are small whirlwinds that lift particles of different origin (dust, sand, snow, ashes, etc.) from the ground. However, behind the same nickname — “devils” — there are similar, but not always the same vortex mechanisms. First, let’s look into the main mechanism of the formation of small whirlwinds. 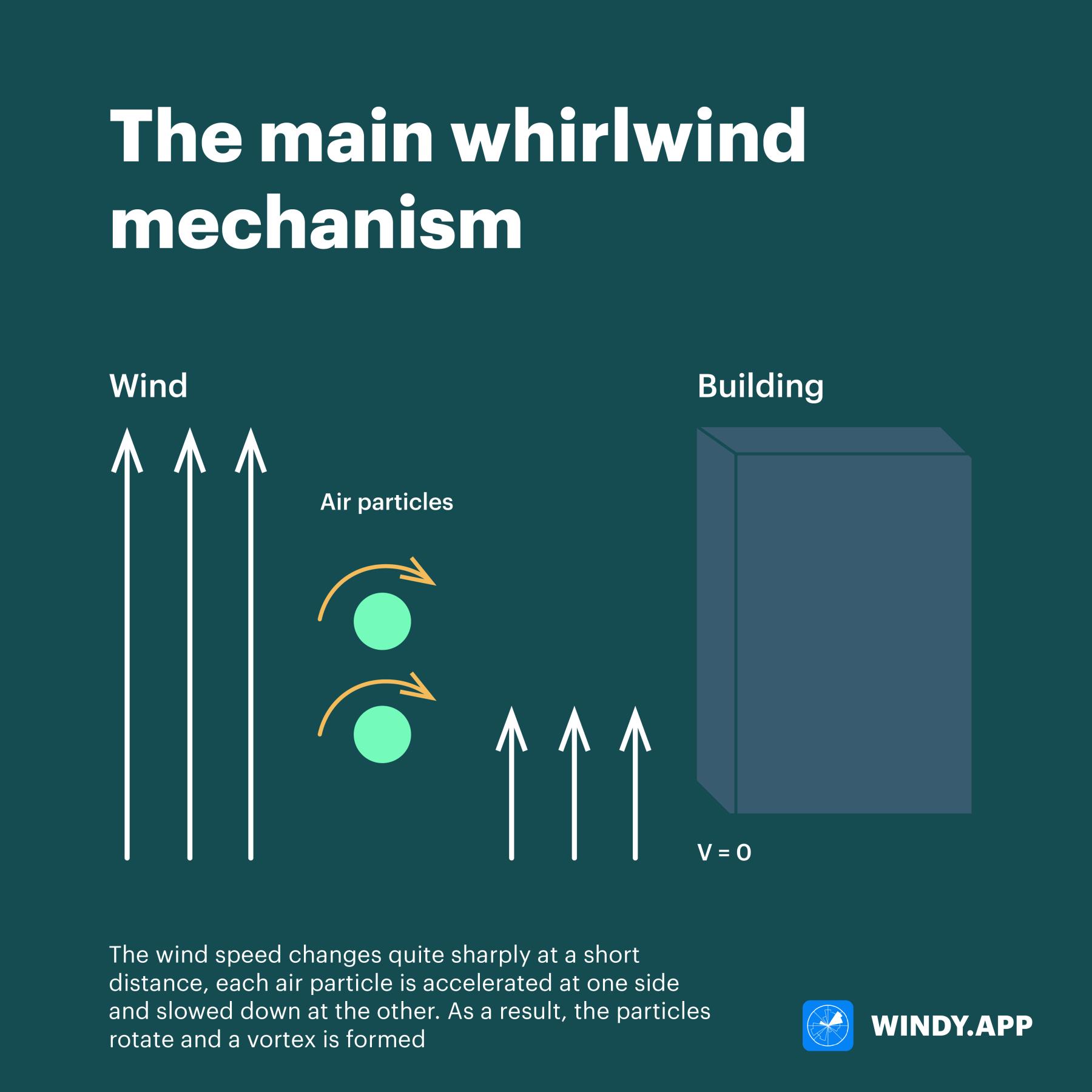 What’s in the picture?

Imagine a particle of air: a single molecule or a group of molecules (in the picture it is the green ball). Now imagine a wind flow that moves along a building. In close proximity to the building, the wind speed is zero, and moving away from the building it gradually increases (the small and the big arrow).

Since the flow speed changes quite sharply at a short distance, each air particle is accelerated at one side and slowed down at the other. As a result, the particles rotate and a vortex is formed.

To understand this mechanism better, you can imagine a stick that floats down a narrow river: one end of the stick is in the middle of the river, where the flow is the fastest, and the other end is closer to the shore. The first end of this stick will move faster, “swerved” forward, while the other end will “fall off” — so the stick begins to rotate.

The features of some devils

A sudden change in wind speed in windy weather may cause a dust whirlwind near a city building, but a small vortex, twisting dust, dry leaves or garbage, can also occur at the edge of the sidewalk at low wind speeds.

The fact is that any “heterogeneity” on the ground or in the air can play the role of a building that leads to a sharp change in flow velocity: an abrupt transition of the lawn into the sidewalk or a sudden occurrence of a rapid upward flow due to the heating of the surface.

In the latter case, a typical “dust devil” is born — one that often occurs in hot deserts (see first photo). If the atmosphere is in a suitable state, a very fast upward flow is formed above the heating site. This flow of warm air is the same “heterogeneity” due to which the air begins to twist and rise up, along with dust and sand.

Strong heating of the air also occurs in a fire or volcano eruption, and in this situation a “fire devil” can develop. If air currents pick up and twist up the ash left from a fire, an “ash devil” will form. And a “snow devil” needs only a strong wind and a sharp change in its speed, and, of course, the snow.

What shouldn’t be confused with these whirlwinds

There are similar “major” whirlwinds that develop in bad weather from a cumulonimbus cloud and descend from there to the water or land surface. They are bigger and stronger than “devils” and we will soon dedicate a separate story to them!

What is a thermal column