A geomagnetic storm is a disturbance of the Earth 's magnetic field in response to excessively strong solar wind currents. Our planet is a large magnet that is surrounded by a magnetic field, which in turn protects us from cosmic radiation. But sometimes this radiation becomes too strong. In this new lesson of the Windy.app Meteorological Textbook (WMT) and newsletter for better weather forecasting you will learn more about geomagnetic storm and how it works.

What is a magnetic field?

Many planets have an ‘energy shield’ protecting them from cosmic radiation which is dangerous for all living things. Why is there radiation in space? Thermonuclear reactions are constantly occurring on the surface of the Sun creating this radiation.

Let’s come back to the ‘shield’ — it’s called the magnetic field. The Earth has one too. Let’s say we’re not destroyed because Earth’s magnetic field saves us from space radiation.

Where does the magnetic field come from?

Any object with electric current running inside has its field — phone chargers, TVs, etc. The stronger the current — the larger the field. In general, the source of a magnetic field is a moving charged particle and, as a result, electric current.

All objects consist of atoms and an atom is a positively charged core and electrons moving around it. So any body has fields inside? No, because they are divergent and compensate each other, so that there’s no field. But in some bodies fields overlap — then there is a field.

In Earth’s iron core there’s current too, that’s why the planet has a magnetic field too. It looks like this: 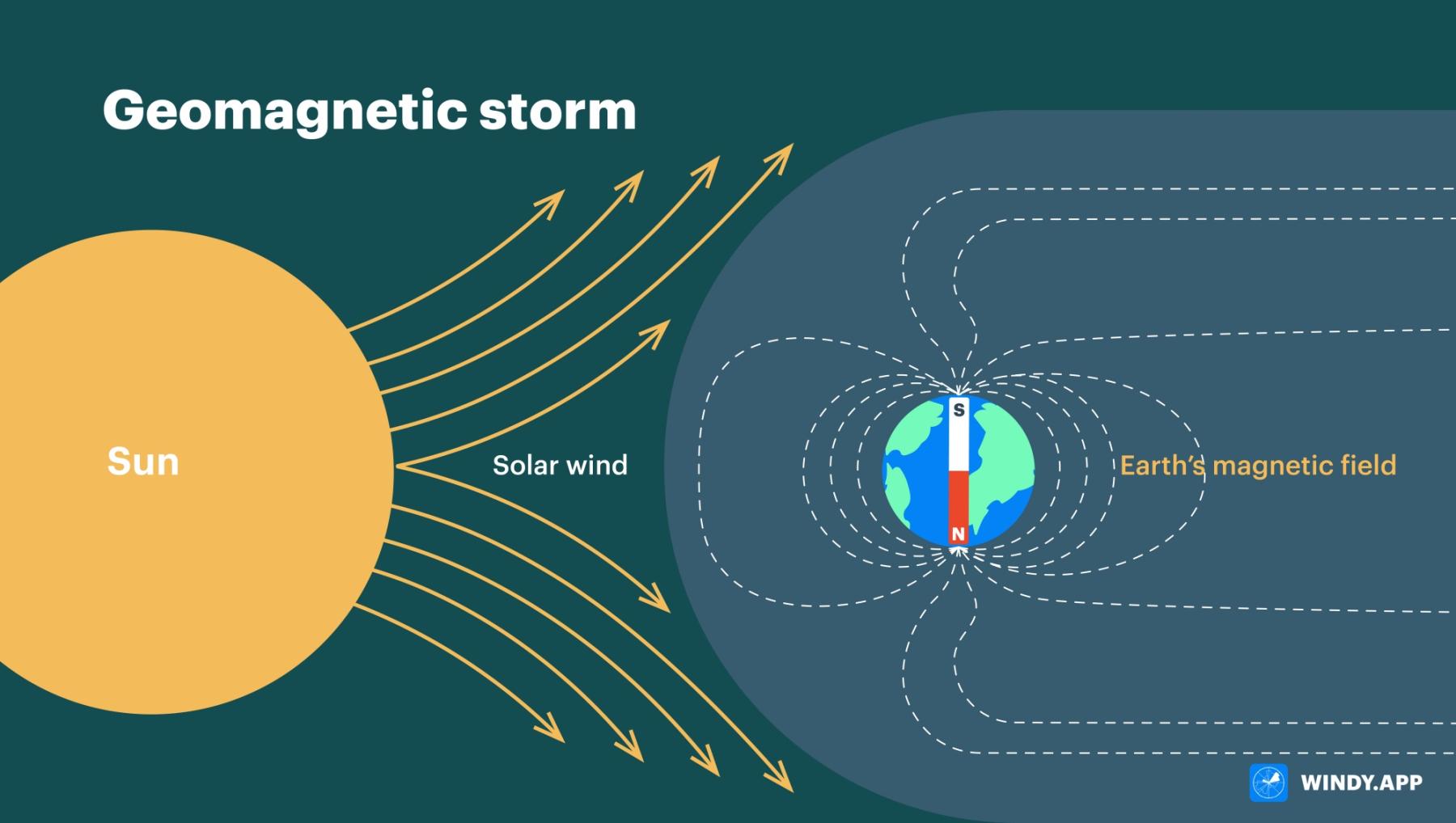 How does the field protect us? It pushes away the particles flying to us from space. Illustration: Valerya Milovanova / Windy.app

Remember we’ve mentioned thermonuclear reactions on the Sun? Due to these reactions the Sun throws particles around- electrons, protons and helium nuclei. A magnetic storm occurs when the solar wind is stronger than usual. In this case Earth’s magnetic field starts to fluctuate — a magnetic storm. For our planet, it’s called geomagnetic as ‘geo’ is greek for Earth.

Geomagnetic storms can last from several hours to several days. When it stops, the magnetic field returns to normal — there’s no ‘pressure’ from the solar wind anymore. By the way, geomagnetic storms cause Aurora Borealis. We’ve discussed it here.

The strongest geomagnetic storm on record happened in 1859. It’s called ‘The Carrington Event’ after the scientist who studied it. Aurora Borealis could even be seen at the equator then. Before magnetic storms disrupted radio channels, but after switching to the cable these problems became irrelevant.

Why do I need to know this?

There are free electrons in metals. Make them move in a certain direction and you have electric current. One of the factors causing it — a changing magnetic field. That’s why electric current can occur in metals if Earth’s magnetic field changes. If the object is long enough — a bridge, a pipeline, a transmission line — then the currents can be quite strong. It’s dangerous to touch such objects!

As far as the influence on human health is concerned — unfortunately, there has not been enough research to make certain conclusions. Why are scientists not interested? The connection between geomagnetic storms and human health hasn’t been proved yet.

Negative results (when no connection between different phenomena is found) are reluctantly published by scientific magazines. It’s more useful to stop the research and focus on a more fruitful project.

What is the Karman line

How ozone holes are formed