Five questions about the 2022 Winter Olympics (and skiing) in Beijing, China

If you're into sports and outdoor activities, and especially during the winter, you probably already know that the new Winter Olympics will be held in the Chinese capital of Beijing from February 4 to 20, 2022.

In this post, we'll answer five questions about it for those who haven't had a chance to figure out all the nuances of the competition yet.

One way or another, you'll also find out where to ski around Beijing after the Olympics when the Olympic venues become available to the general public.

1. Is there new Olympics? I thought it was held somewhere recently, wasn't it?

You’re right, we almost got confused, too.

Last year there was the Summer Olympics, which were held in Tokyo, Japan, which is also very close to China. This is the main reason for the confusion.

Two Olympics in a row is an exception to the general rule. Usually, they are held every two years and succeed each other: summer, winter, summer, and so on... The Tokyo Games were supposed to be held in 2020 but were postponed to 2021 because of the world health and travel situation, and even then they took place with great effort. They could have been canceled altogether, or we would have had two Olympics this year — even more amazing.

But even before that, Beijing hosted the Olympics relatively recently. That was the Summer Olympics Games in 2008. So with the new competition, China will be one of the countries that will host the Olympics in both seasons. Other examples include Russia (Moscow in the summer of 1980 and Sochi in the winter of 2014), as well as France, Canada, the United States, Britain, and other countries.

The previous Winter Olympics were also held in Asia, in PyeongChang, South Korea, in 2018, and the next ones will be held in Europe in Milan and Cortina d'Ampezzo in the Dolomites in Italy. 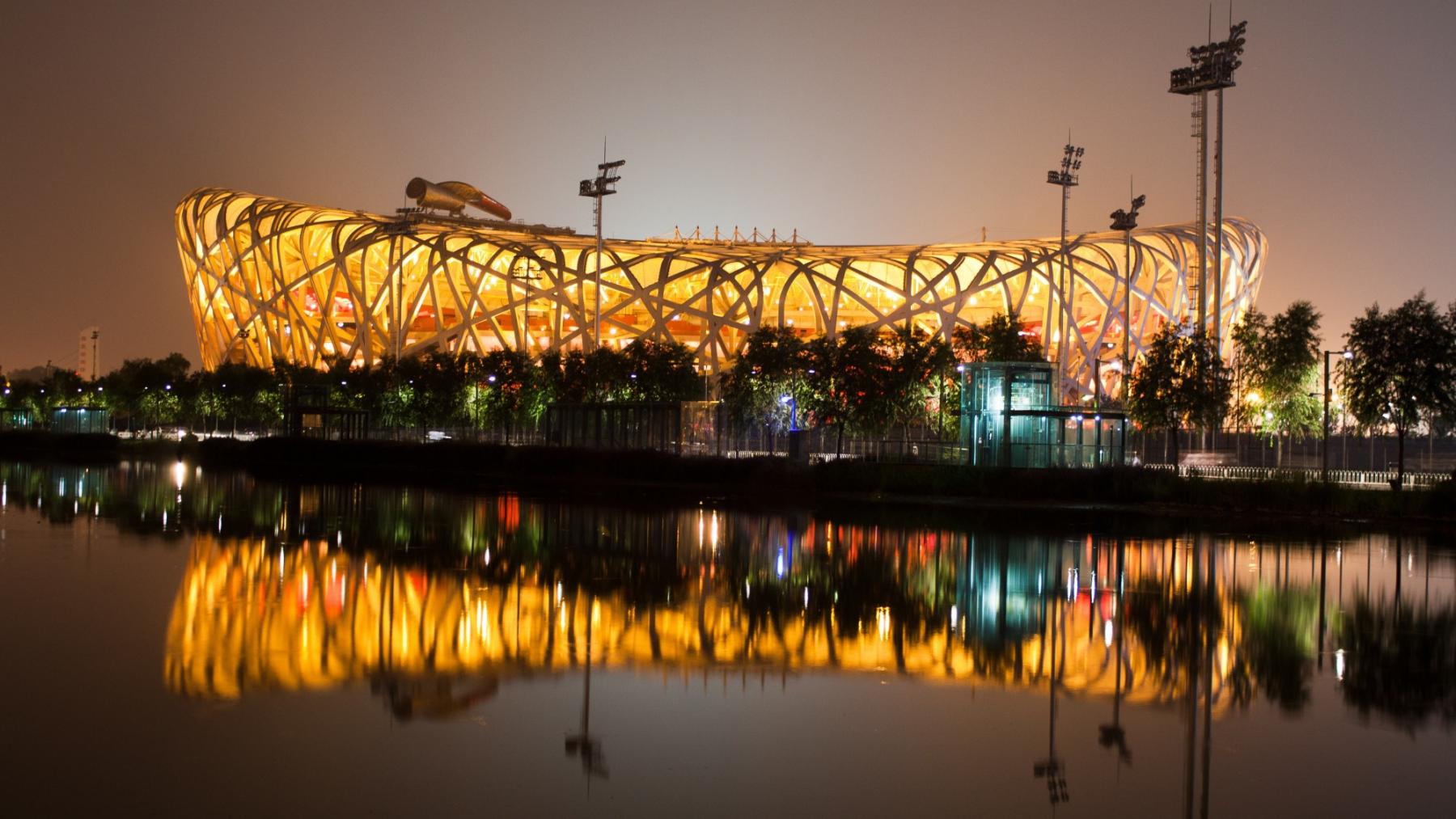 2. What is interesting about the new Winter Olympics and why should I watch it?

In our opinion, this year’s Olympic Games look pretty standard, without any surprises: the opening ceremony — two weeks of competition — the closing ceremony. The Olympics will use the same facilities as for the 2008 Summer Games: for example, the world-famous National Stadium also known as “The Bird’s Nest” due to its unique design.

The only “peculiarities” are the numerous restrictions because of the health situation, just like everywhere else in the world. However, there are a few more...

The Olympics coincide with the Chinese New Year, which is celebrated by a special Chinese Lunisolar calendar. It occurs on February 1, the second new moon after the winter solstice. This will be the Year of the Tiger. That is, all of February in China will be one big holiday.

For the new Olympics, they also drew new icons or pictograms for various sports. Here they are, take a closer look at them: 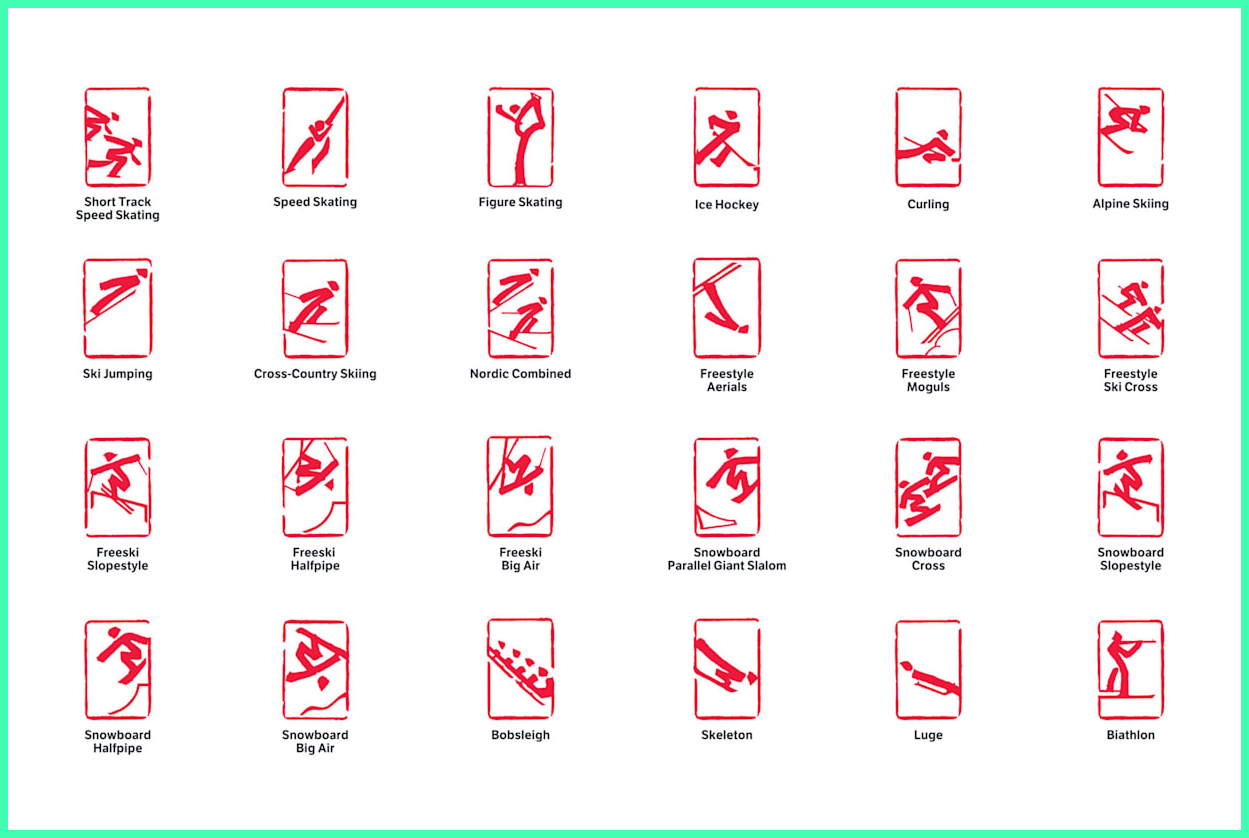 The sports icons (pictograms) of the Beijing 2022 Winter Olympics in China / Olympics.com

According to the Olympics Organizing Committee, “the designed is based on the traditional art form of seal engraving. Each of the pictograms depicts its respective discipline with unique strokes — like those carved with a knife on Chinese seals dating back to the Qin and Han dynasties. The pictograms embody both the motion of winter sports and China’s rich culture in modern graphics. The sharp contrast between the red background and the white strokes also highlights the grace and dynamism of winter sports, as well as adding a festive vibe to the Games, which will echo with the Chinese Lunar New Year in 2022.”

The medals' design is also simple — their creators decided not to surprise people, as it was in previous years in other Olympics in London and Brazil with more unusual medals. But they are still very beautiful. The design references the jade pendant discovered during the Western Han dynasty in the Lingjiatan Archaeological Site in Anhui, China.

The design of these medals also has a special name, “Tong Xin”, which means “Together as one”. 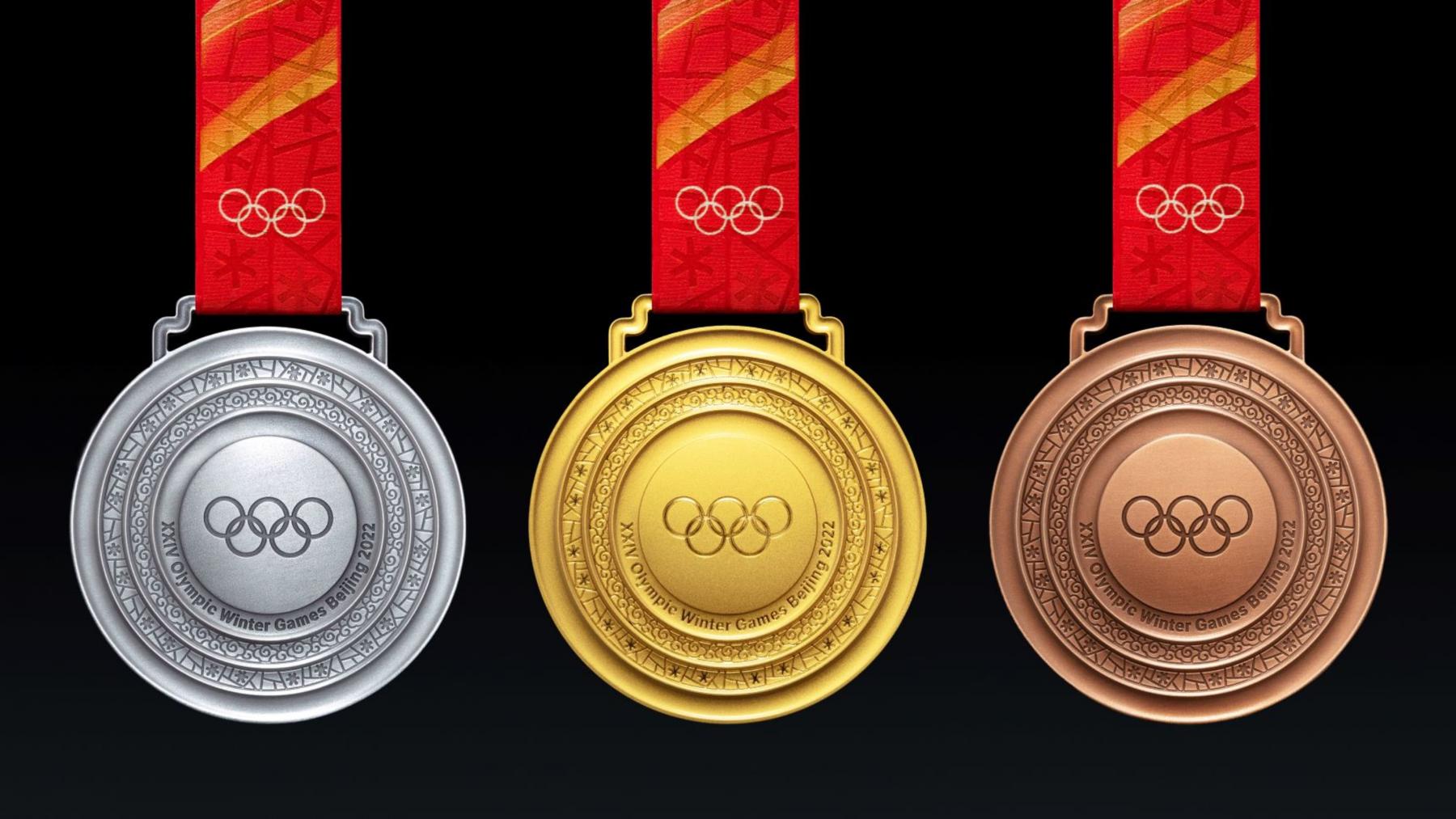 The medal's design of the 2022 Winter Olympics in Beijing, China / Olympics.com 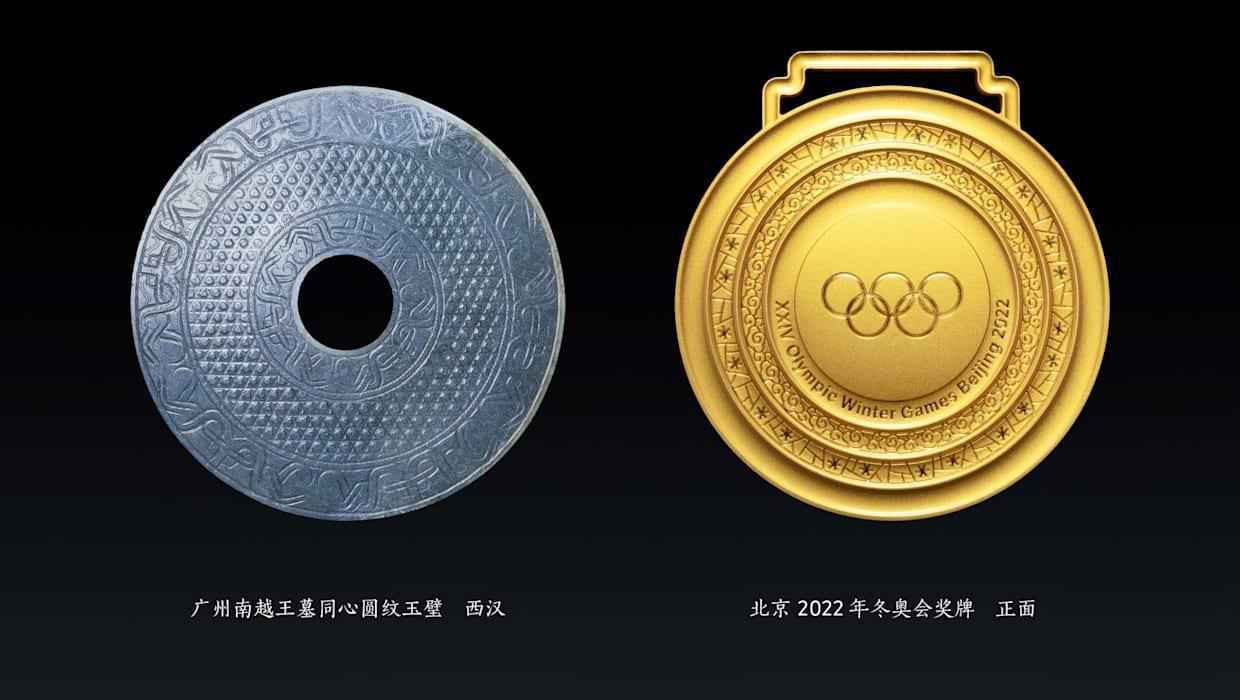 The jade pendant from the Lingjiatan Archaeological Site in Anhui, China / Olympics.com

The bottom line is that this year’s Olympics are worth watching primarily because of your favorite winter sports, as well as a few new disciplines. Or, in case you live or will find yourself in China during the competition, you can try to visit some of the events in person. But it could be diffucult considering the number of locals thinking about the same.

3. Ok, which Olympic sports will take place outdoors and which are the new ones?

You’re right again, sports in the Olympics are traditionally divided into those held in stadiums and those held outdoors. At Beijing, the latter include all popular traditional winter sports that listed below. These are seven sports out of 15 in total in the 2022 Olympics, that is almost half. The number of events, i.e. different disciplines in which medals will be awarded to men, women and mixed teams, is given in brackets:

The total number of events in all sports is 109. This is a record number for the Winter Olympics. By the way, here is another special feature of this year's Games.

There are no new outdoor sports at this Olympics but there are few new disciplines, namely: Wen’s and Woman’s Big Air and Mixed Team Aerials in freestyle skiing, Mixed Team Normal Hill in ski jumping, and Mixed Team Snowboard Cross in snowboarding.

You can find the general schedule, as well as the individual disciplines in a special table on the official website of the Olympics. 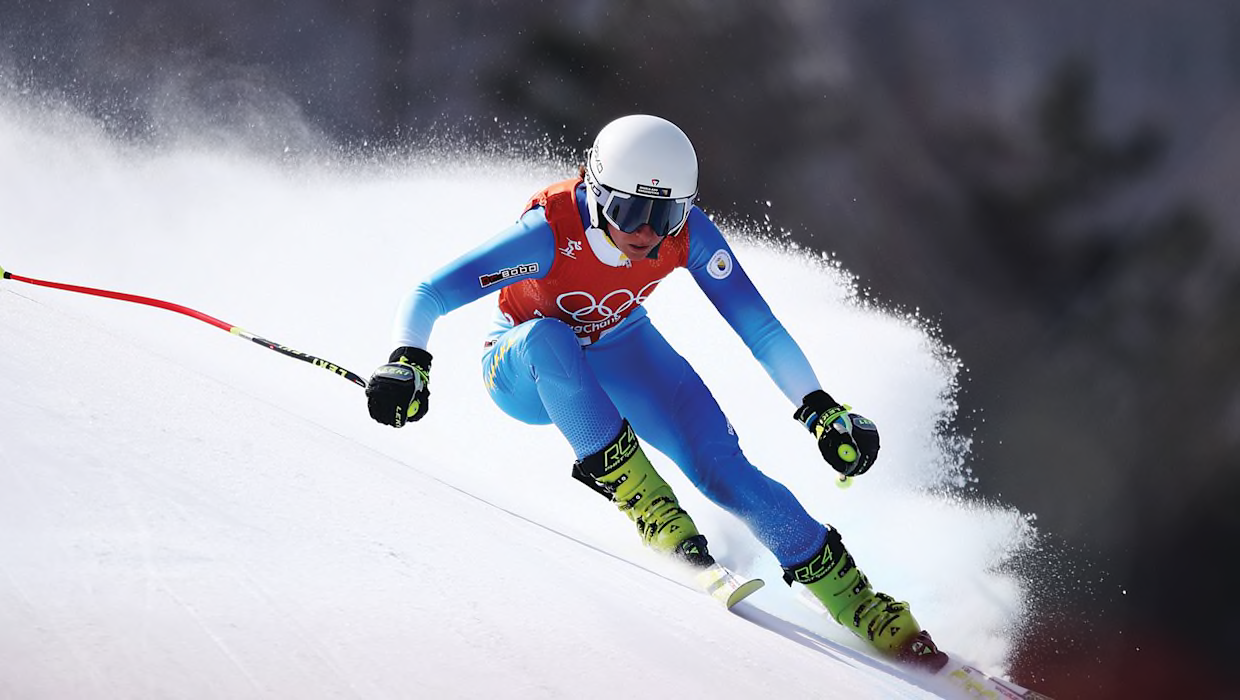 4. Where will the ski competitions at the Olympics take place? Can I ski there myself?

Globally, China is not associated with winter sports. When we talk about it, we usually mean Europe, Scandinavia, and the United States. However, China has several hundred ski resorts and ski areas, located mostly in the eastern part of the country.

The main outdoor competitions of the Olympics will be held near Beijing in two special zones: Yanqing and Zhangjiakou, named after the administrative districts. The third zone is Beijing itself, where most of the stadium competitions will take place. In these first two zones, there are several smaller areas:

The first area is the National Alpine Skiing Centre also known as Xiaohaituo Alpine Skiing Field. It is located in the Xiaohaituo Mountain Area in Yanqing District of Beijing, just 100 km (mi) from the city center. As you can see from the name, it's where the Alpine skiing competitions will be held.

The second and main sports cluster of the Olympics is Zhangjiakou District of the Hebei Province, which is located 224 km (3:15 hours by car) from the Chinese capital. It can be reached by public transportation via the new high-speed intercity railway in about one hour built for the Olympics. But the distance from the train station to the facilities is still 33 km you can cover by local bus.

At the same time, the Wanlong Ski Resort, one of the largest in the area around Beijing, is located here. The resort and the two specialized centers on its territory — National Biathlon Centre and the National Cross-Country Centre — will stage the majority of the ski and snowboarding events at the 2022 Winter Games.

So, given the presence of sports centers on the national scale, the Wanlong Ski Resort is more like a specialist resort, providing a pro-level skiing experience — a great choice for advanced skiers. The resort offers stable snow quality or good quality powder snow, and there’s one improved wild snow forest area.

Of course, during the Olympics, and most likely after the competitions until the end of the ski season, the resort will be closed to regular visitors, so you can ski here again in 2022–2023. The skiing season at the Wanlong Ski Resort is from late October to early May.

But it's worth the wait if you haven't been there yet. There are 32 ski trails with a total length of 22 kilometers: 6 beginners — 4 kilometers, 4 intermediate — 12 kilometers, and 22 advanced — 6 kilometers. There are two gondola lifts and four chairlifts with the highest point of 2,100 m and the lowest point of 1,560 m, so the altitude difference of the resort is 554 m. 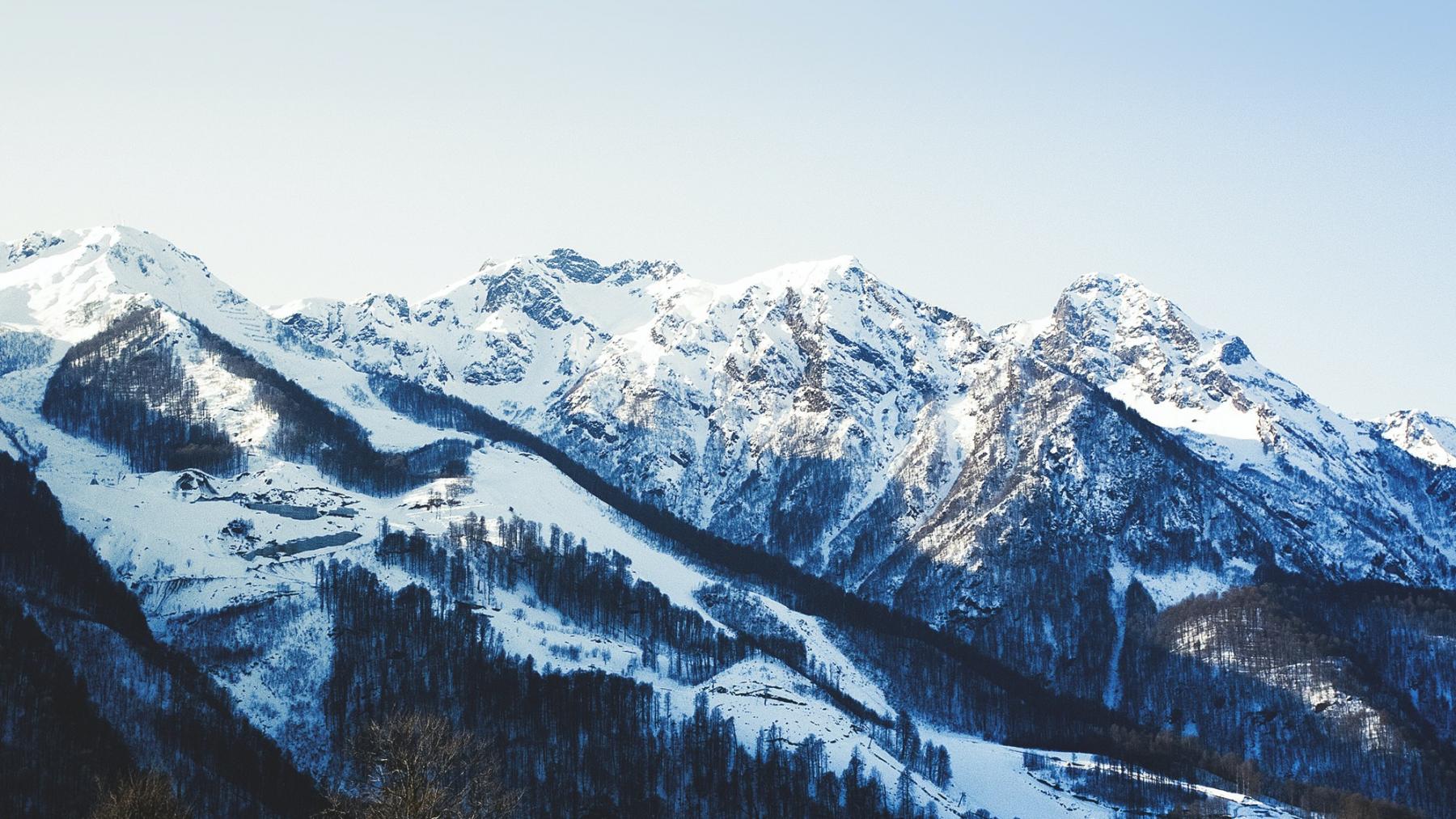 Finally, the Genting Snow Park (Genting Resort Secret Garden) at the Fulong Ski Resort west of Wanlong will be the home of freestyle skiing and snowboarding events (apart from Big Air).

For skiing during normal non-Olympic times, in addition to the aforementioned areas, there are several other resorts in the same Zhangjiakou District: Beiou Yueye Ski Resort, Thaiwoo Ski Resort, and Duole Meidi Ski Field. In total, there are at least 10 major ski resorts within an hour’s drive of Beijing: Chongli, Yunfoshan, Shijinglong, Nanshan, and others.

5. Where to get the weather forecast for skiing in China and other countries?

In the Windy.app, there is a database of thousands of the most popular ski resorts around the world, as well as a special Snow Weather Profile with a ready-to-use set of more than 10 weather parameters in the snow forecast for skiing, snowboarding, and other winter activities.

To find resorts and activate the profile:

1. Open the Weather Map from the Home Screen and then click on the Extra Settings icon at the bottom of the map's screen. 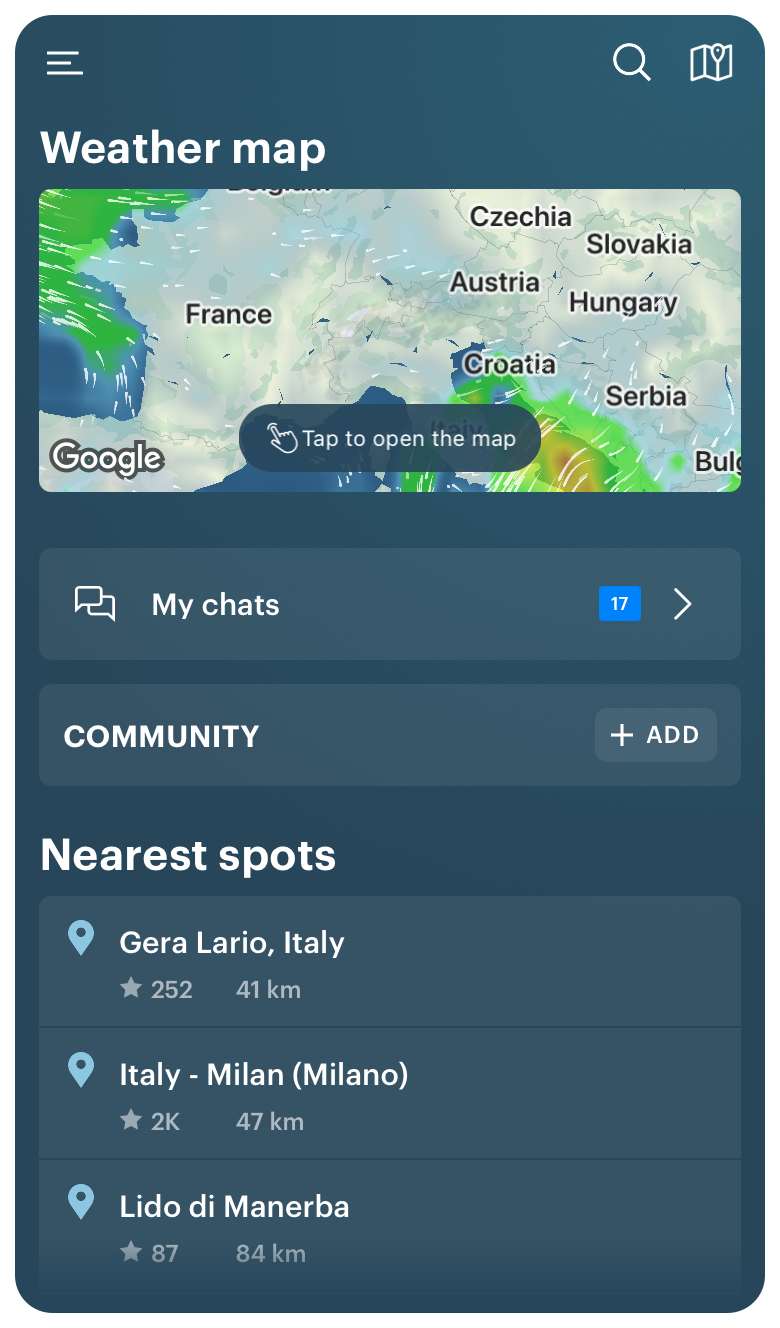 Home Screen of the Windy.app for iOS

2. Choose the type of spot you are interested in — in this case, snow — and zoom in on the map for China, Europe, the US, or the other country to find resorts. You can also enter their names in the map search or on the Home Screen if you know them already. 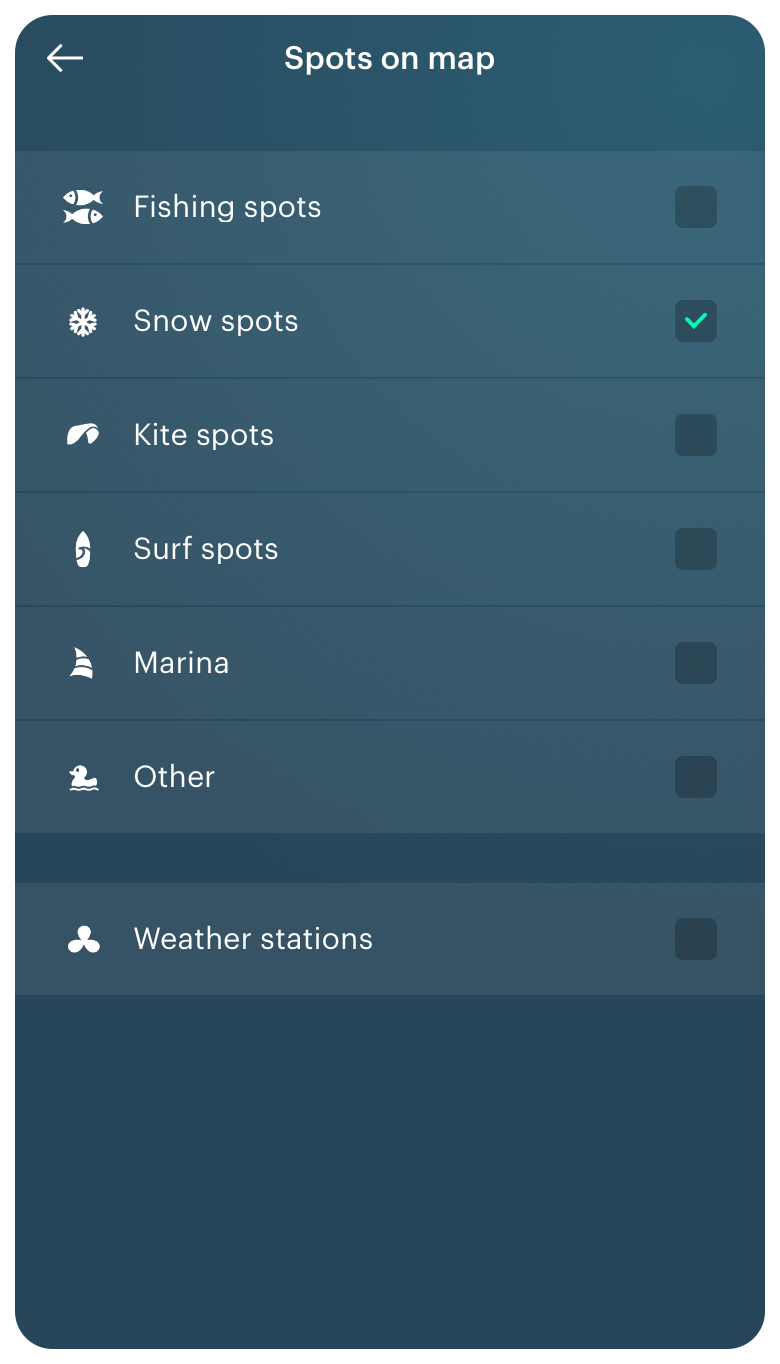 Types of spots in the Windy.app for iOS 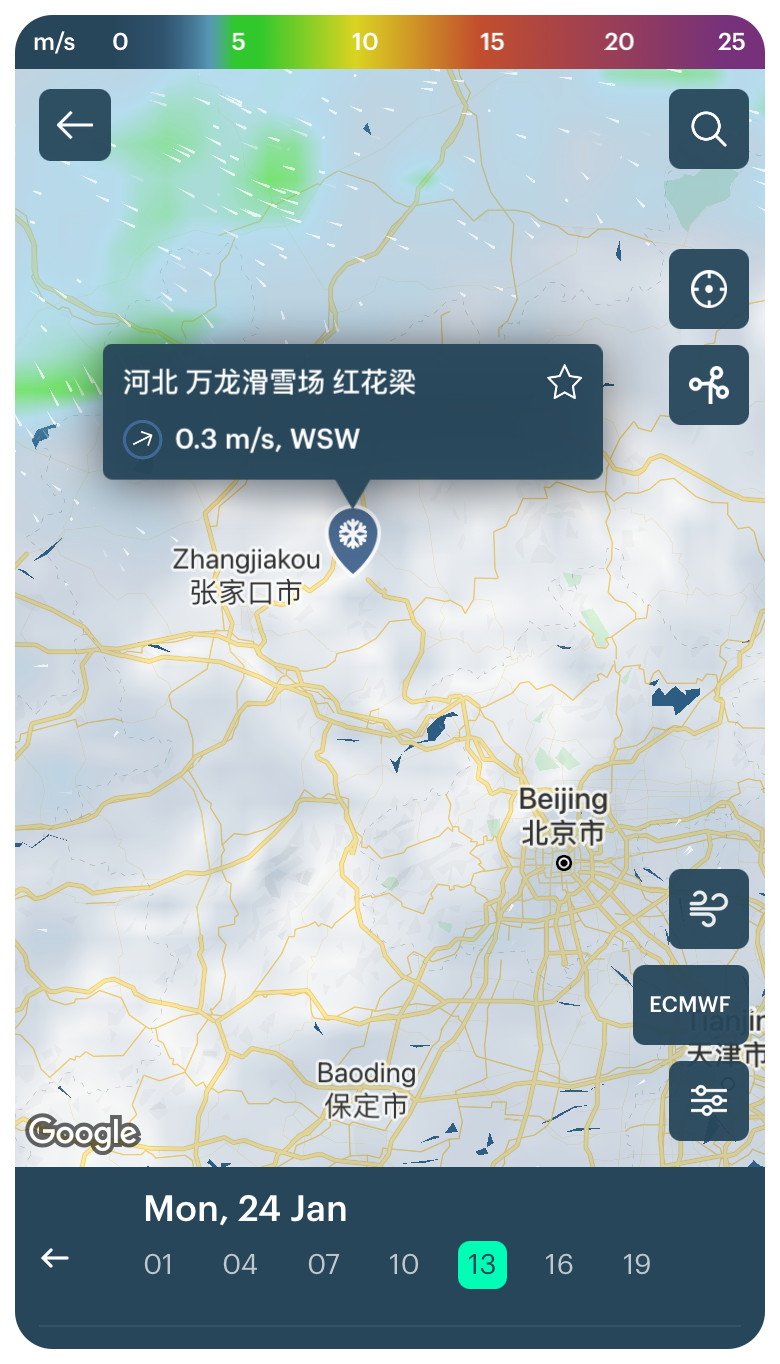 Wanlong Ski Resort (万龙滑雪场) on the Weather Map in the Windy.app for iOS

3. Go to the resort page to get the weather forecast.

4. Switch the weather profile to Snow by clicking on the icon to the right of the list of weather models. 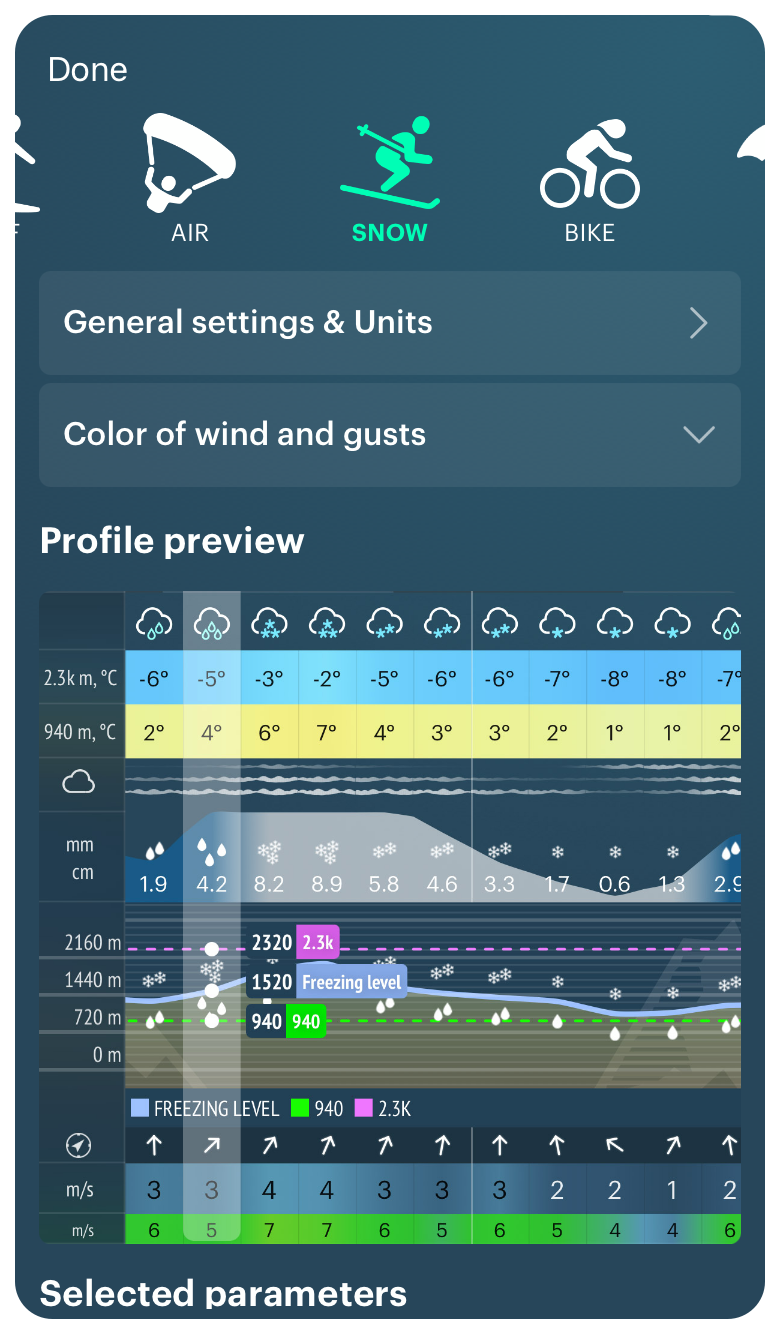 Snow Weather Profile in the Windy.app for iOS 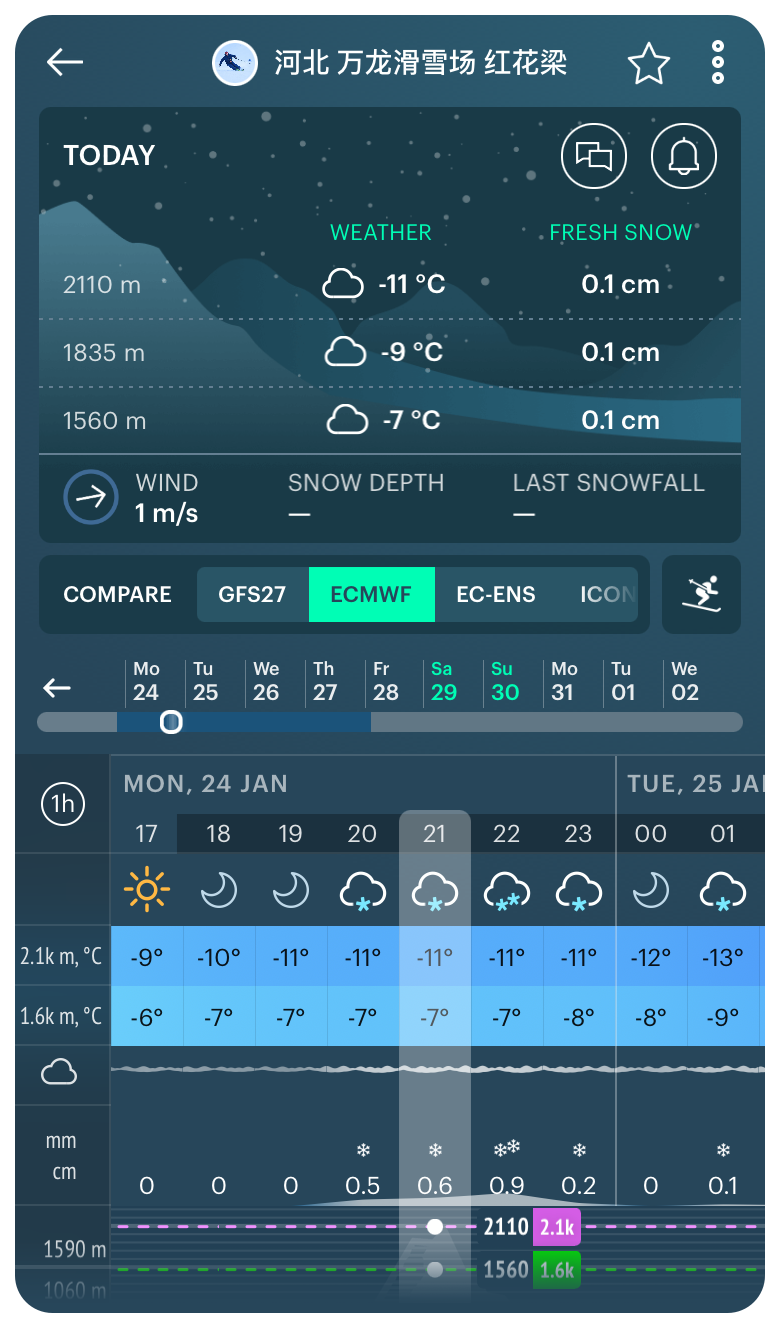 5. On the same page, under the Spot Info section, you can find detailed information about each resort, including the number and types of ski trails, lifts, top and bottom stations altitude, as well as some photos and reviews from users who have already been there, if available for the resort. 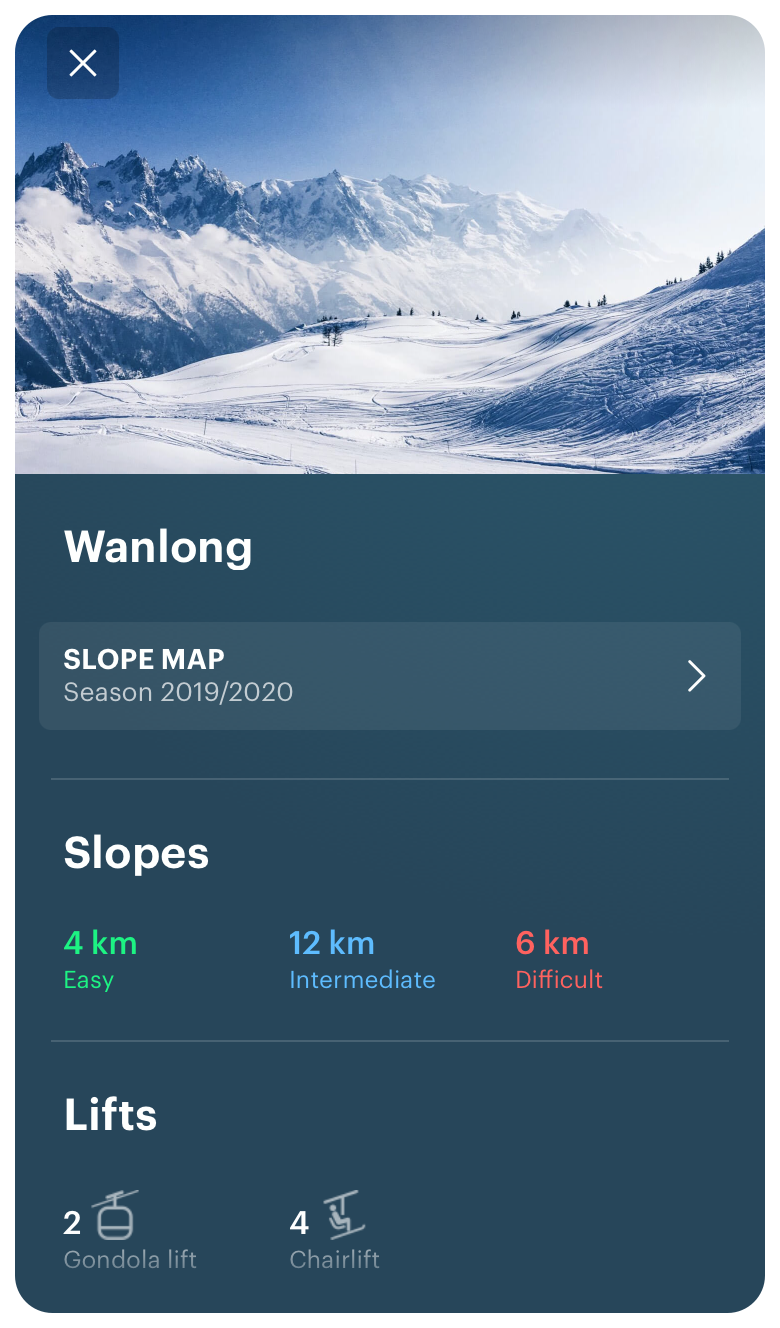 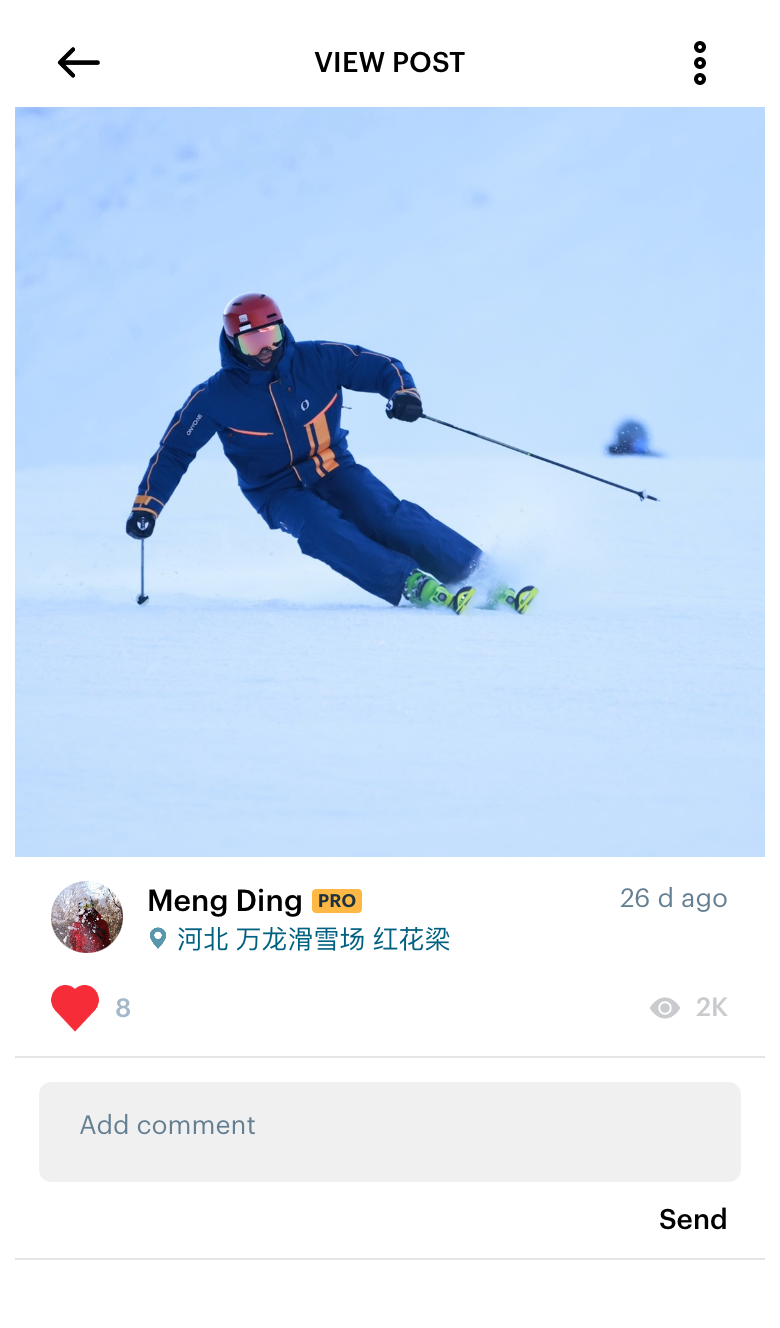 The collection of articles about skiing and snowboarding

Check the list of European snow camps for pros and beginners