The reversal of Earth's magnetic poles. How and when they will flip

We know that the Earth’s magnetic field will literally turn upside down more than once in the future. But what does this mean for people?

When everything is normal?

The summary of our previous letter “Magnetic field”:

Recall, the Earth is surrounded by an invisible shield — a magnetic field consisting of invisible closed lines leaving the planet at one pole and entering it at the other.

This field is generated by chaotic flows of liquid iron in the planet’s core. All because molten iron serves as an excellent medium for the movement of the particles responsible for everything related to electricity — electrons. And where there is the movement of electrons, there are always magnetic fields.

The Earth, like any magnet, has two magnetic poles — north, where the lines leave the planet, and south, where they enter it. But if an ordinary magnet with poles is simple, in the case of our planet simplicity is only on the outside — and inside there is real chaos.

But it hasn’t always been like that. The fact is that the movement of matter in the Earth’s core is really mostly disorderly, new magnetic fields with their lines and poles are constantly formed there, and the existing fields change.

But the rotation of the Earth and the movement of matter between the different layers of the planet can maintain constant currents, which serve as a generator of a more powerful or ’main’ field — which we call the magnetic field of the Earth.

When the poles change?

Normally, the currents important to the Earth’s ’main’ field in the liquid part of the core are swirled by the planet’s rotation so that they support each other, and the magnetic field functions in the usual way.

But this can always change, since, remember, the liquid core is very chaotic. For example, the direction of one of the currents important to our magnetic field can spontaneously change, the field lines ’tethered’ to it become entangled with others and start pulling them along — like the tangled cables of a misfolded parachute.

When this happens, the overall magnetic field of the planet weakens, or it may even ’turn off’ to an outside observer from somewhere on Mars. But in the core, the processes of formation and change of magnetic fields will not stop for a second, because the motion of matter will not stop.

In this situation, flows inside the liquid core constantly give birth to new candidate fields for the ’main’ magnetic field of the Earth, and for some time we may have several large magnetic fields with their north-south pairs all over the planet at once. One of them sooner or later will win as a result of competition (merging and repulsion) in the core — will be in the right position to be strengthened by the Earth’s rotation, and we will have a powerful ’main’ field again.

On the left is the Earth’s normal magnetic field. On the right — in the process of changing poles

We cannot, of course, look into the center of the Earth to confirm that this is what happens. However, we do know that over the past 83 million years, the Earth’s poles have flipped 183 times, on average once every 450,000 years. It is visible due to the different magnetization of iron in deposits under the ground and on the bottom of oceans.

It is known that this process can last thousands of years, or much less — probably, even within the limits of human life. There is no regularity in geomagnetic reversal — statistics show that it occurs spontaneously. Accordingly, the periods of ’normality’ of the magnetic field, i.e. retention of the same poles, also vary — from tens of thousands up to 50 million years.

The last time magnetic poles flipped 780,000 years ago, but we can’t say ’aha, 450,000 years have long passed, we have to expect an imminent reversal of poles!’ as statistically, it is an accidental process, it is impossible to predict it. We only know that the magnetic south pole of the Earth is gradually creeping from Canada towards Siberia with a velocity of approximately 60 kilometers per year.

It is also impossible to say that it will be a pole reversal. Sometimes the magnetic field changes poles, but suddenly puts them back in place over a short period, and other times it just weakens temporarily while the poles noticeably drift sideways — but then everything returns to normal. Such events are called geomagnetic excursions.

There are hypotheses, according to which geomagnetic reversal can also be caused by events outside the core, even on the surface of the planet — for example, meteorite impact, which with sufficient mass should shake the liquid core. But it has not been possible to confirm it, so disorderly processes in the liquid core are still considered the main reason for the geomagnetic reversal. 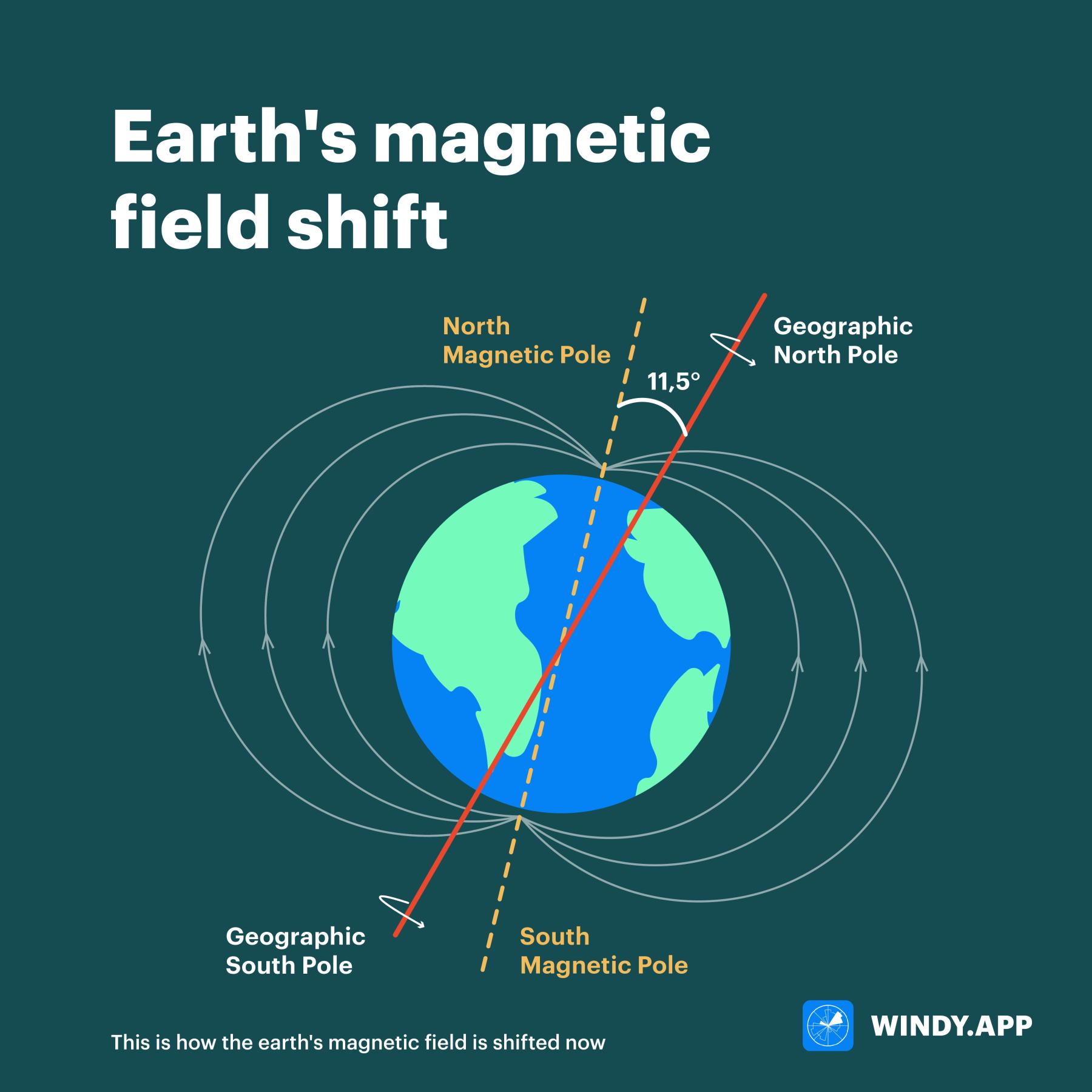 The end of the world or nothing special?

The Earth’s magnetic field serves as a shield against the most dangerous part of solar and other cosmic radiation. When colliding with the lines of the Earth’s magnetic field, such particles are forced to change their trajectory and either circle around the planet or follow the lines to the planet’s poles in order to become part of the polar lights when they collide with its atmosphere.

Any sufficiently strong weakening of the magnetic field, whether a pole shift or geomagnetic excursion, will allow solar radiation to penetrate to the planet’s surface more freely. And this means not only beautiful auroras far beyond the polar circle, but also an increase in mutations, cancers, sunburns, and other effects of excessive sunbathing.

For this reason, scientists have been trying for decades to time known pole shifts with mass extinctions in the past, but have failed to do so. No visible apocalypse occurred during these 183 full-fledged poles flips, life went on. Ancestors of modern people Homo erectus, for example, have gone through such an event 780,000 years ago without known negative consequences.

Probably as in the case of geomagnetic storms one should fear the impact on electronics and not on living organisms — after all surplus of solar radiation can close power circuits and cause blackouts, as well as damage GPS satellites. Unlike geomagnetic storms the process of pole reversal can last not for days, but for thousands of years, so people will have to be prepared accordingly — for example, place a special shield in space to filter dangerous particles, which will always be on the line between the Sun and the Earth.

Opinions differ, however, on the effect on living organisms and the climate. In February 2021, a study came out that linked sudden cooling and droughts, as well as the disappearance of Australian megafauna, to the Laschamp event, a geomagnetic excursion that occurred just 42,000 years ago. Perhaps our ancestors began to live in caves more and smear their skin with red ochre (they started to leave drawings made with it around that time) to protect themselves from the harsh sun, the authors suggested.

But not all samples of that period have evidence of such noticeable cataclysms in the climate, besides the instability of the magnetic field then coincided with an abnormally low solar activity.

Therefore, scientists have yet to confirm the hypothesis of the Laschamp event. In other words, even if geomagnetic reversal really is harmful, it is too early to speak confidently about the high degree of this harm.