Italy is a country known for its infinite number of spots for outdoor activities, which even an immortal Roman could never count. However, among them, there are large enough to be counted and not difficult to find on a map. Yes, you guessed it: national parks.

There are 25 protected areas of this type in Italy, located all over the country from the Alps to the islands of Sicily and Sardinia, covering about 5% of its territory, which it’s not small — its total border length is 1,836.4 km (1,141.1 mi). The national parks are suitable above all for hiking, but also many other sports: biking, sailing, diving, paragliding, skiing, and others.

If you are not already a fan of Italy and have never been there before, it can be difficult to navigate through such a variety of parks. But I am a fan and live here for the past 10 years. So I’ve chosen the top five Italian national parks out of 25 — the main one in each of the country’s large regions — Northwest and Northeast, Center, South, and an island — and I’ll tell about their main features and hiking trails in this article. 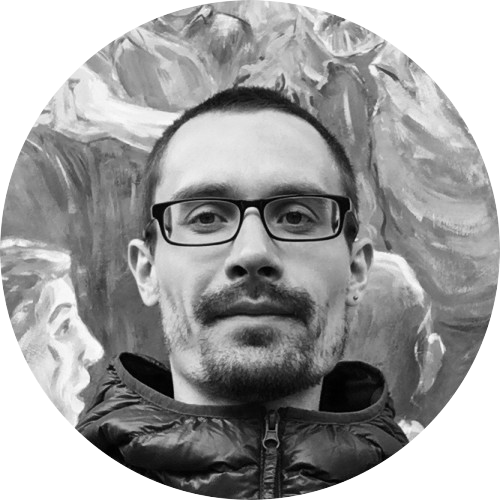 Ivan Kuznetsov, an outdoor writer from the Italian Alps and Finnish Karelia 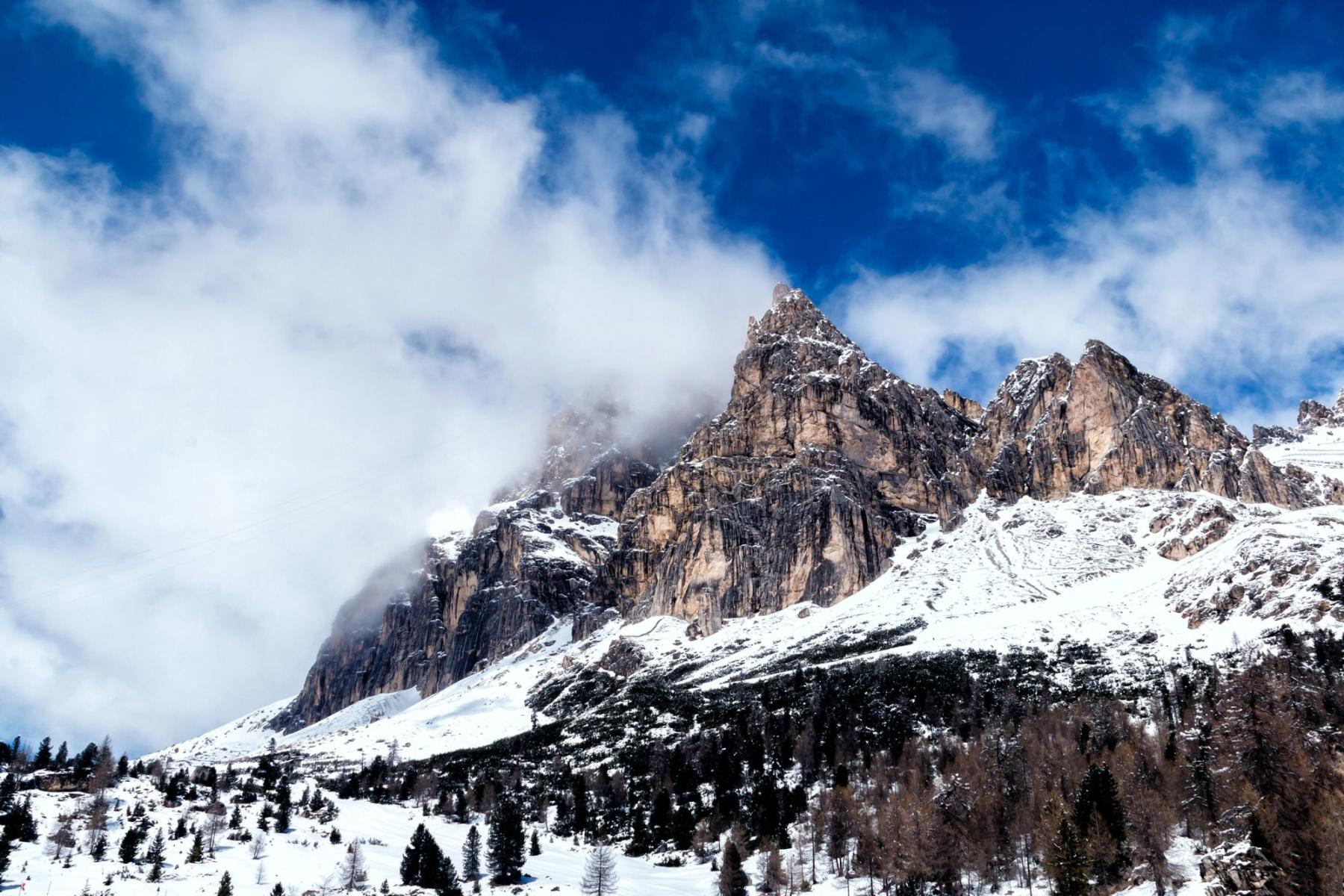 The park is located in the province of Belluno in the Veneto region, whose capital of the same name could be found right at the foot of the park’s mountains on its southern borders. You can go hiking right from the center of this beautiful old town on the Piave, the largest river in all of northeastern Italy. The nearest large and famous city is the tourist capital of the country, Venice, just over 100 km to the south.

The main feature of the park is two vast mountain ranges — Cimonega and Schiara — also known by the common name of Dolomiti Bellunesi after the capital of the province. As the name implies, they are part of the wider Dolomites range, which in turn is part of the Eastern Alps, and are known far beyond Italy as possibly the most beautiful mountains in the world. It is also a UNESCO World Heritage Site and the only national park in the Dolomites and this part of the country.

The main hiking trail in the park is called Alta Via delle Dolomiti Bellunesi, which translates to “High Way,” meaning it runs at an average altitude of about 2,000 meters and covers its entire area. The total length of the trail is 107.6 km (66.3 mi), which can be completed in 8 days-stages.

Get the weather forecast for Belluno, Veneto 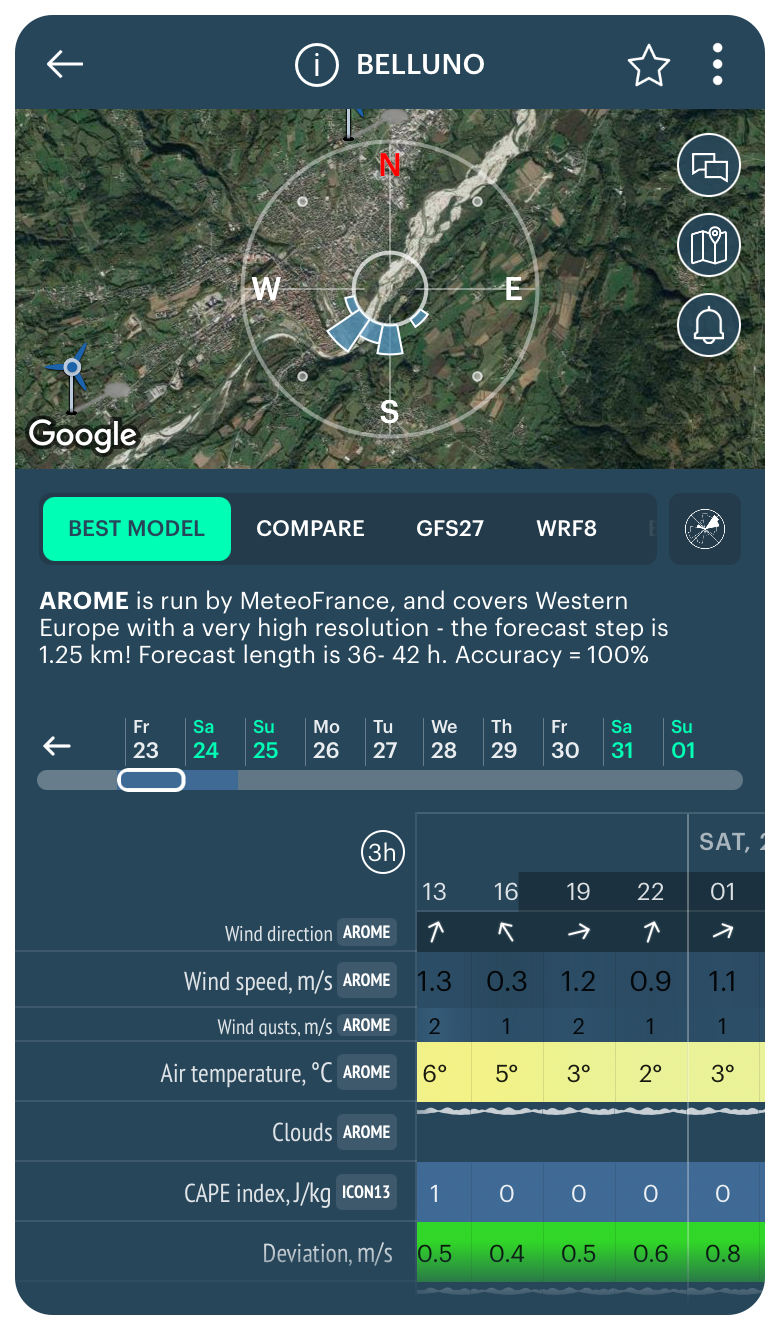 Weather forecast for Belluno, Veneto, in the Windy.app for iOS 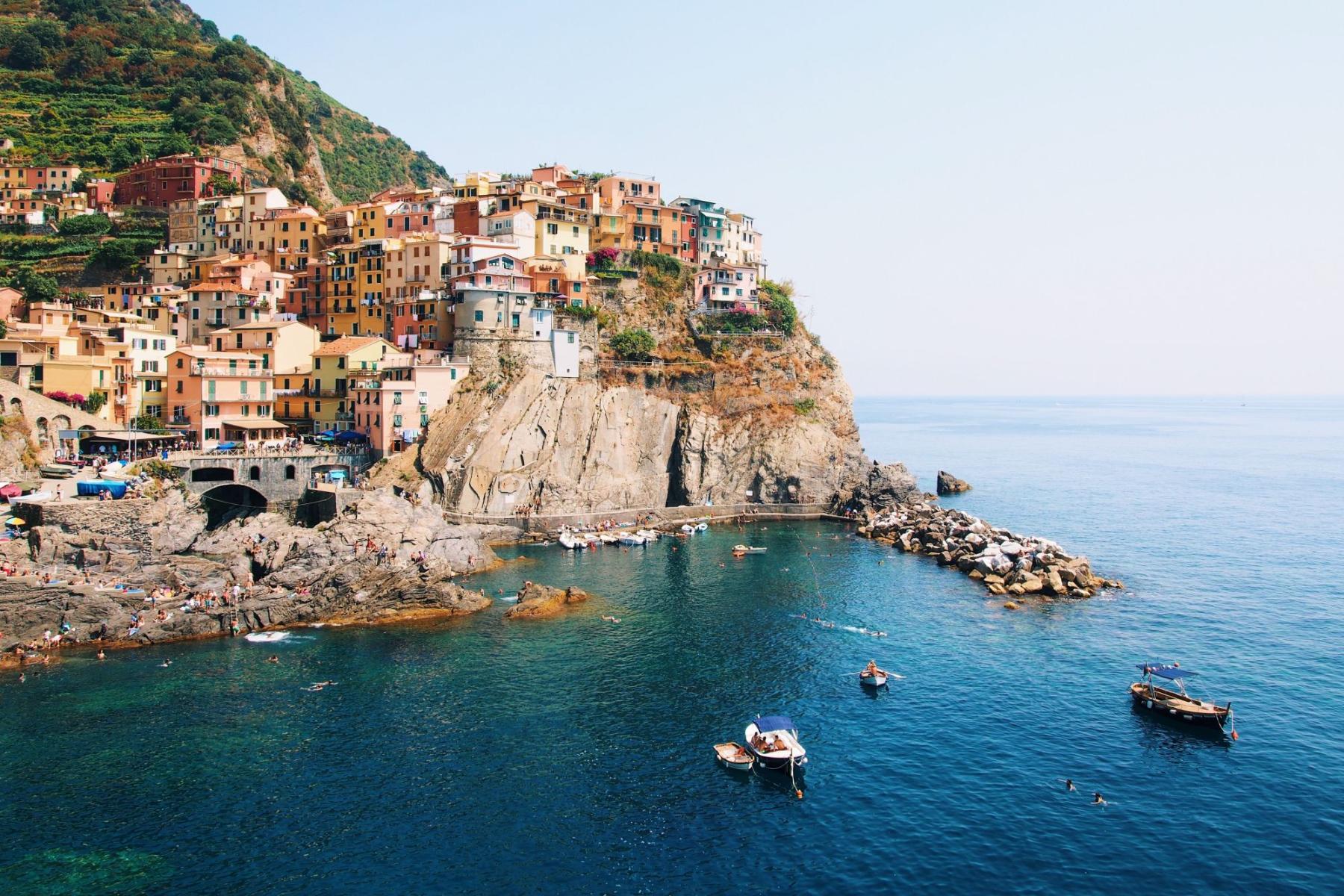 Cinque Terre National Park is the main national park in the northwestern Italy.

You have probably already heard about it. In recent years Cinque Terre has gained such wild popularity that it seems to have begun to displace Venice from the first place among the most visited tourist destinations in Italy. The park is located on the shores of the Ligurian Sea and belongs to the province of La Spezia in the region of Liguria of the same name.

The main feature of the park, which gave it its name, is five villages (or lands — "terre" in Italian), located on the high rocky promontories along the coast, namely Riomaggiore, Manarola, Corniglia, Vernazza, and Monterosso al Mare, which, like the Dolomites, are a UNESCO site. The original fishing villages live today mainly from tourism.

The Blue Path Trail is the longest in the park, 12 km (7.5 miles), which runs from one village to another. But the Azure Trail between Vernazza and Monterosso al Mare is much better known for its special beauty and is only 3 km (1.9 miles) shorter. The trail is so popular that local authorities periodically close it to reduce the number of tourists.

Get the weather forecast for Monterosso al Mare, Liguria 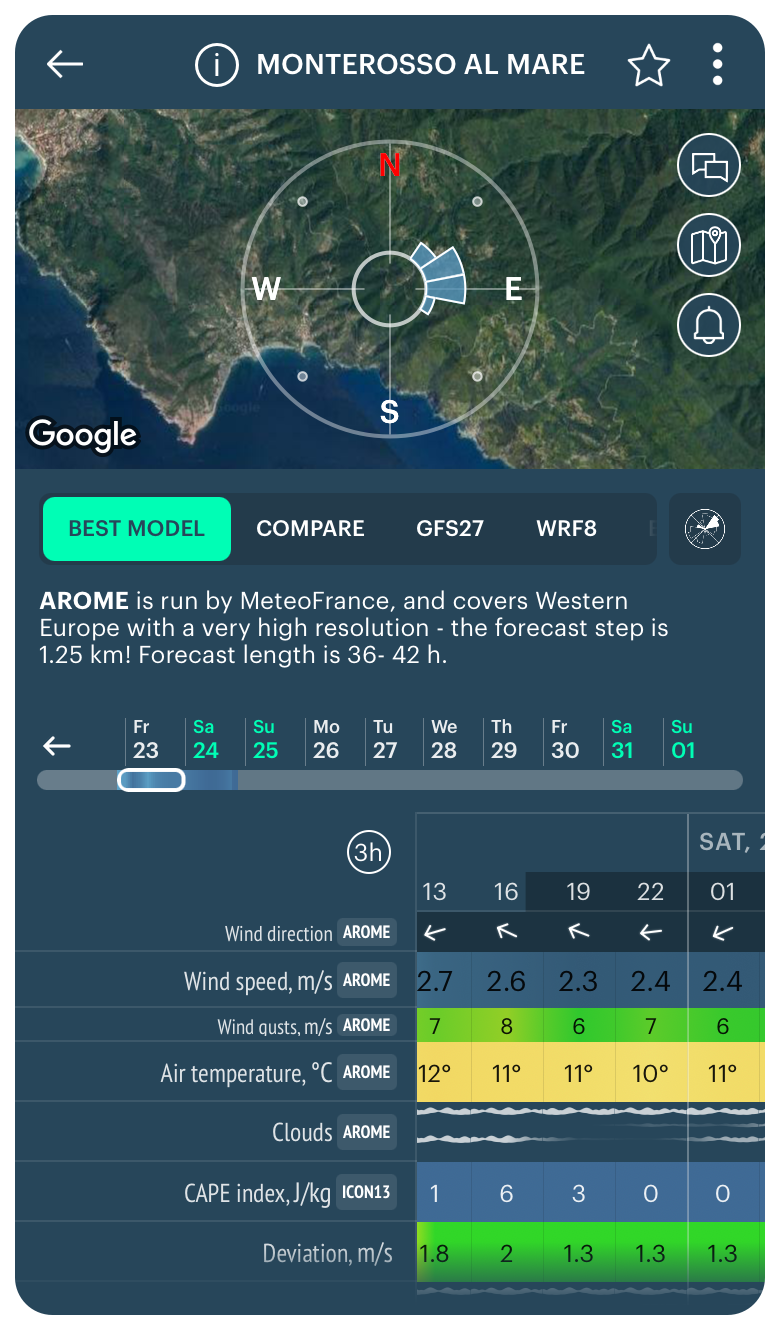 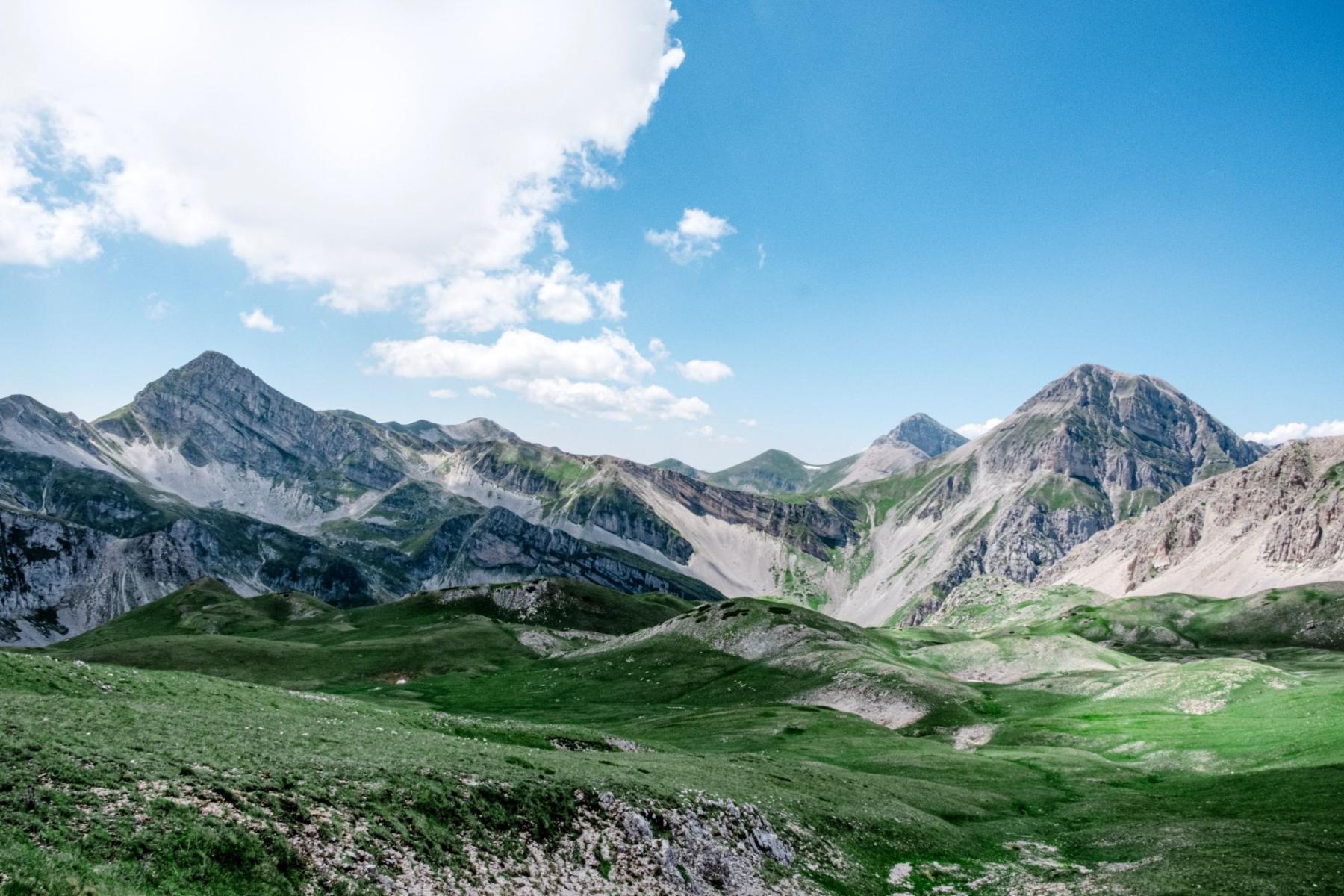 Just like the Dolomiti Bellunesi, it is located within the two mountain ranges — Gran Sasso d’Italia and Monti della Laga — in the geographical center of the Apennine mountain system and at the same time of the entire Apennine Peninsula. On the administrative map, the park covers five provinces in three regions. The nearest major city is Rome. But the park is surprisingly little known to tourists but is a popular among Romans themselves, as well as residents of all three regions.

The main feature of the park is the mountain massif Gran Sasso d’Italia (“The Great Stone of Italy”) itself, which is both the most extensive in area and the highest in the entire Apennines. In particular, the mountain has three peaks, the highest of which is Corno Grande (2,912 m / 9,554 ft) or “The Great Horn". The mountain is also a ski resort with 13 km of slopes and 4 ski lifts. Monti della Laga is a smaller but also relatively large range in the neighborhood.

The main trail in the park is the hike to Corno Grande via Campo Imperatore (“The Emperor’s Field”) — a huge interior plateau of 27 km (17 mi) long and 8 km (5 mi) wide, similar to Tibet, so locals call it that adding the "Little". You can get to the plateau by cable car to save the effort of the hike.

Get the weather forecast for L’Aquila, Abruzzo 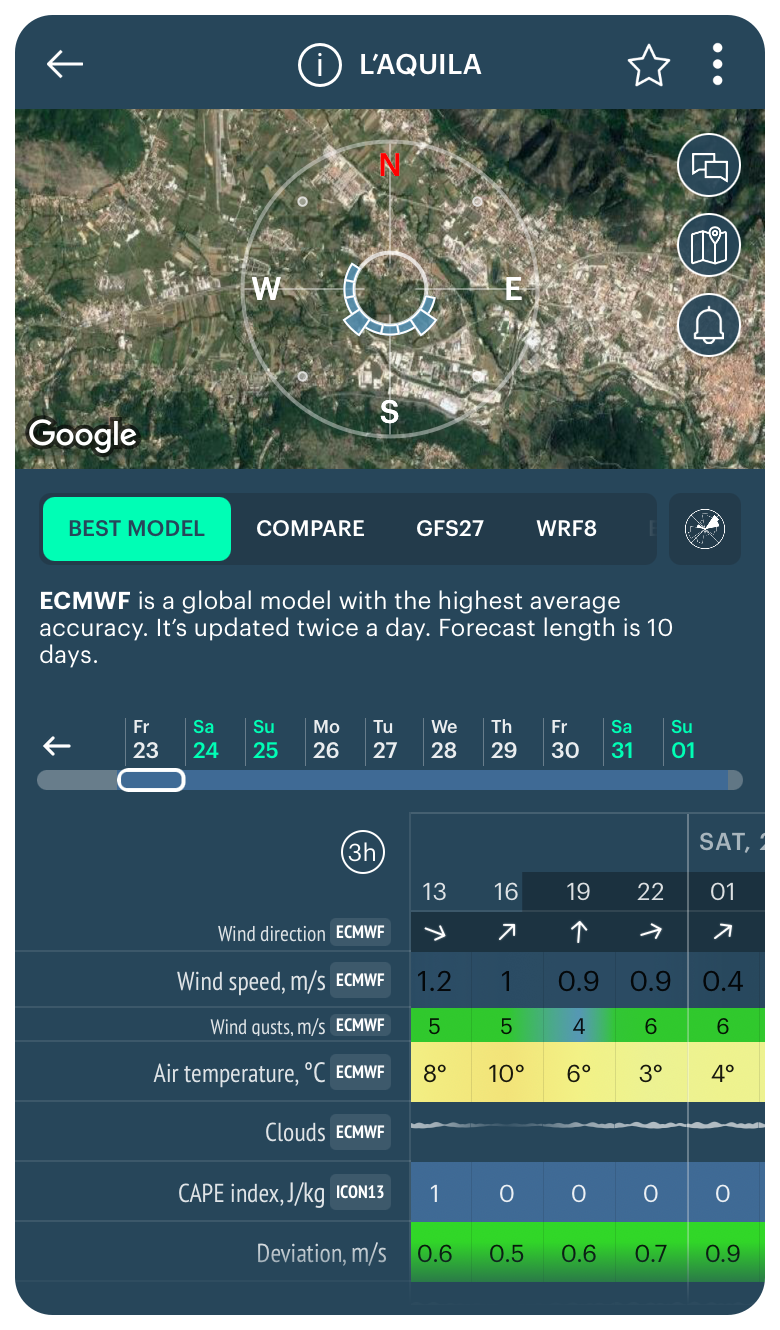 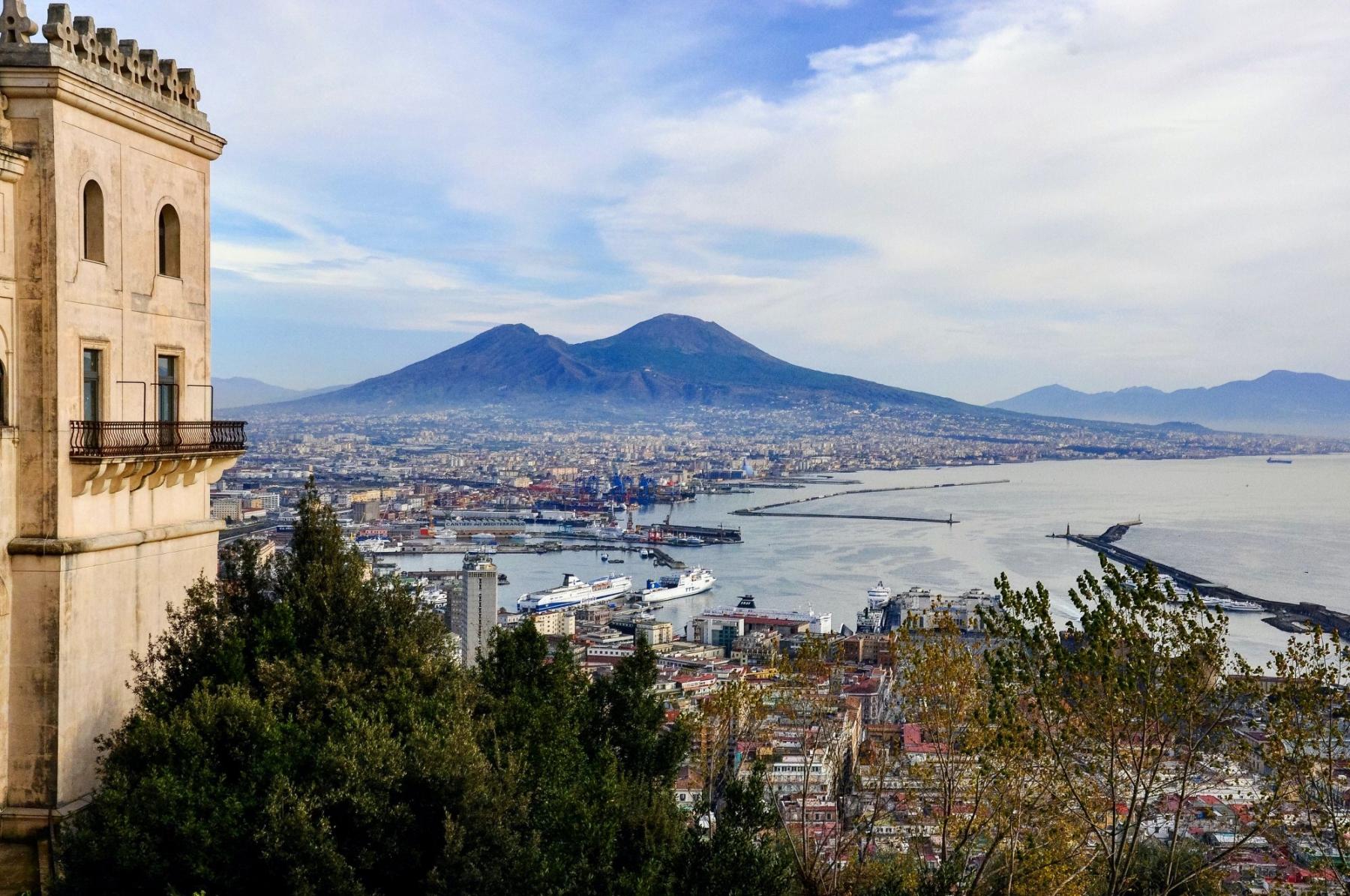 Vesuvius National Park is the main national park in the south of Italy.

As you immediately guessed, the park is formed around the most famous volcano in Italy and one of the most famous in the world, Vesuvius or Vesuvio of 1,281 m (4,202 ft). But we should add: infamous. Located southeast of the largest city in southern Italy, Naples in the Campania region, it covered the Naple's suburb of Pompeii with lava, along with all its inhabitants, in 79 AD.

The main feature of the volcano is that it is still active, and has erupted several times since the beginning of the twentieth century: in 1906, 1908, and several times between 1913 and 1944. It is also only one of four of the 30+ active volcanoes in Italy and in all of Europe (the other three are Etna in Sicily, and Stromboli, and Vulcano of the Aeolian Islands just nearby). From here Vesuvius is not only beautiful but still very dangerous.

The main trail of the park is the actual ascent to its summit and the walk along its crater called "The Gran Cono" (“The Great Crater”) which is 4 km (2.5 mi) one way. But there are other longer ones up to 10–15 km across the park, including the lava fields from the last eruptions.

Get the weather forecast for Naples, Campania 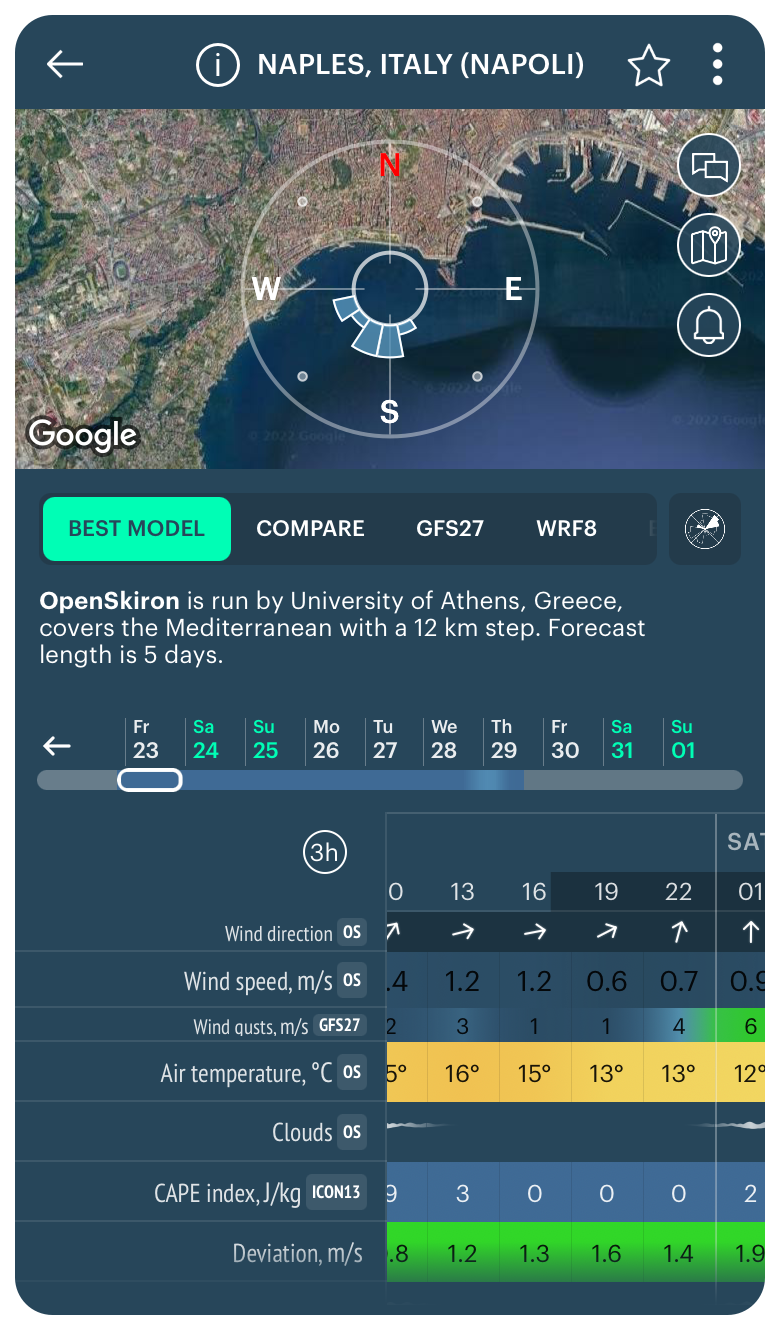 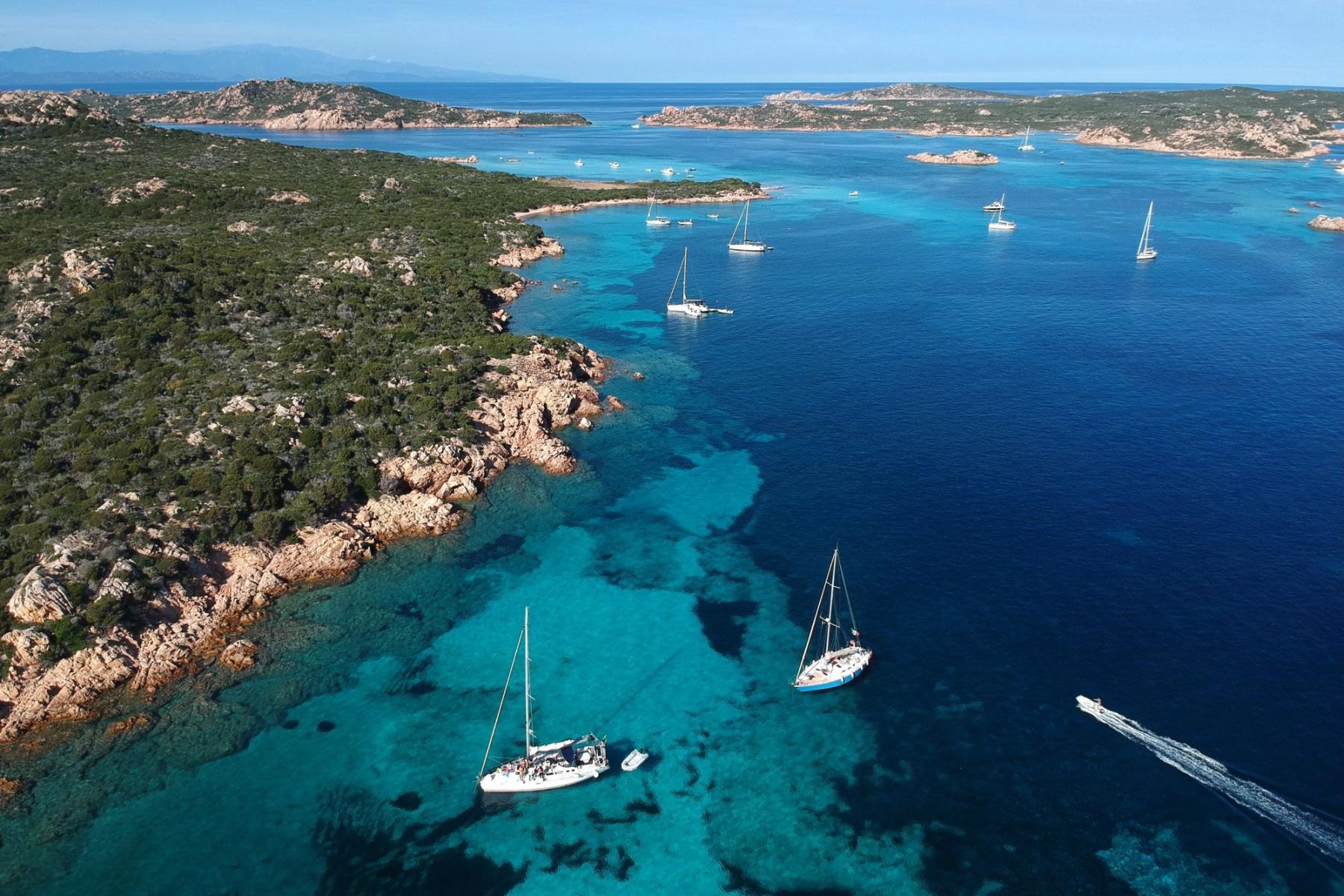 The archipelago of La Maddalena National Park is the main national in the island part of Italy.

It is located to the north of the island of Sardinia, the second largest after Sicily. But, given that the latter almost merges with the Apennine Peninsula, it is often perceived as part of the mainland, while Sardinia is a “real island” in the middle of the Tyrrhenian Sea, west of Rome. It is, too, a territory of Italy, so I just couldn’t miss it, although it is further not the most famous park. Administratively it belongs to the province of Sassari in the Sardinia region of the same name.

The main feature of the park is an incredibly picturesque archipelago, consisting of about a dozen large and small rocky islands, including the main one with the same name, La Maddalena, and more than 180 kilometers of Sardinia coastline highly indented with bays with crystal clear waters and snow-white beaches, ideal also for parking your boat.

There is not a single main trail in the park, but there is a small system of marked trails that covers the entire island of Caprera, second in size after La Maddalena just to the east of it, under the general name Caprera Trails, which has 16 routes. Tip: the island has almost no tall trees, so be sure to bring a hat and plenty of water, even in the middle of winter and avoid the hot summer. Use the Windy.app Hiking Checklist.

Get the weather forecast for Palau, Sardinia 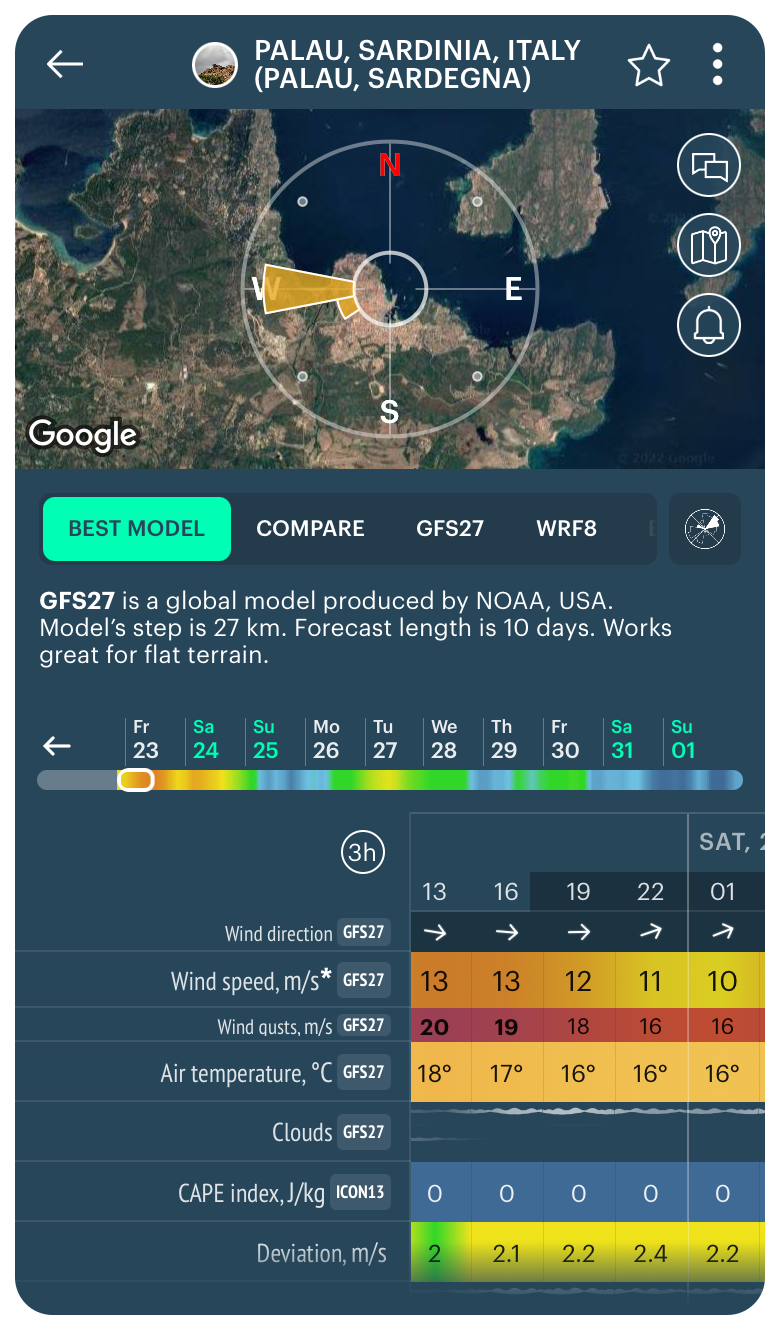 Here are the top four Finnish national parks out of forty

The guide to Teide National Park in Spain

Get the weather forecast for all US national parks

How to avoid a snowfall when winter hiking the mountains

How to enjoy hiking in the rain

Update: Routes with Weather for biking and hiking