What is the Alpenglow and how to observe it

If you are passionate about outdoor activities, especially hiking and photography, or both, you have heard of or even observed such a phenomenon as Alpenglow.

Probably, it is the most beautiful visible light effect in the mountains and one of the greatest in nature in general. It is so great that some hikers and photographers specifically hunt for it, and then talk about their adventures in detail and produce photo books.

In this new lesson of the Windy.app Meteorological Textbook (WMT) and newsletter for better weather forecasting you will learn what Alpenglow is, how it forms, and where and when to observe it.

What is the Alpenglow?

The Alpenglow or Alpine glow belongs to the section of meteorology called “Atmospheric optics”.

It is a glow that occurs on the mountaintops, on which this effect is best seen, at sunset or dawn when the sun goes behind the horizon or appears from behind it. At that moment, the peaks, meter by a meter (foot by foot), are colored in all the warm hues of the rainbow from bright yellow through orange to pink. The latter, as the most unusual color of this light show, is most notably associated with this effect.

The glow is orange and pink because these are the longest warm rays of electromagnetic wave (light) — they reach various surfaces, while cold rays are shorter and disappear faster in the atmosphere.

The glow continues for some time after sunset until the mountains turn purple and then gray. Then they go out, only to flare up again at dawn.

In German, Alpenglow is called Alpenglühen. In Italian, it is enrosadira. The latter comes from the language of the Ladins, a small indigenous people of the Dolomites, a part of the Alps, numbering 35,000, who live in the five famous valleys that we may know as the center of skiing in this region: Badia, Fassa, Gardena, Ampezzo, and Livinallongo. But we will return to the Dolomites... 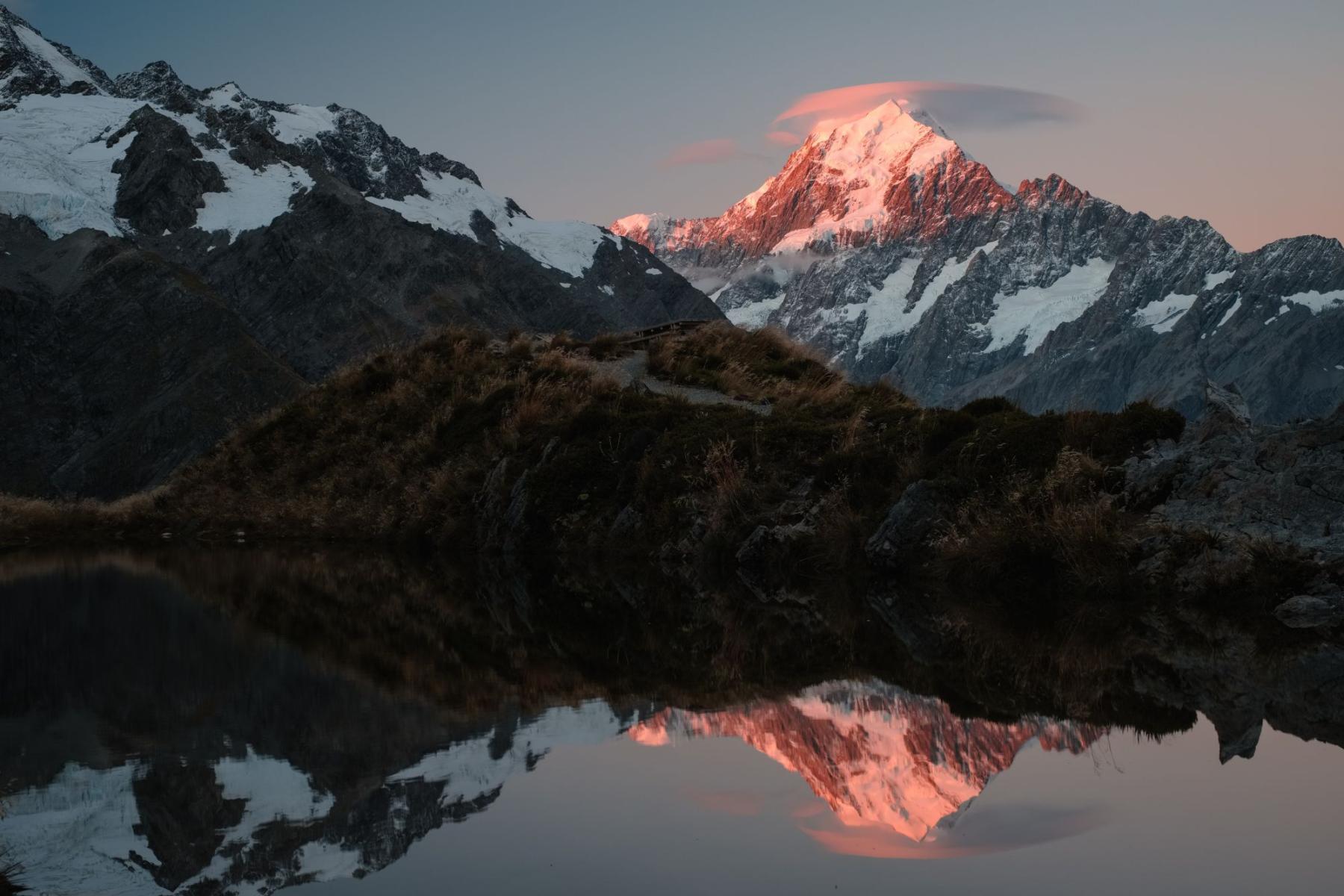 How does the Alpenglow occur?

There is no unequivocal answer to the question of how the Alpine glow occurs, not counting, of course, the source of the glow — the sun. But there are three common opinions on this subject:

A third opinion says that the reason for Alpenglow can be of both kinds.

However, many professional outdoors photographers have long disputed the first version, leaning toward the second and not considering the third. 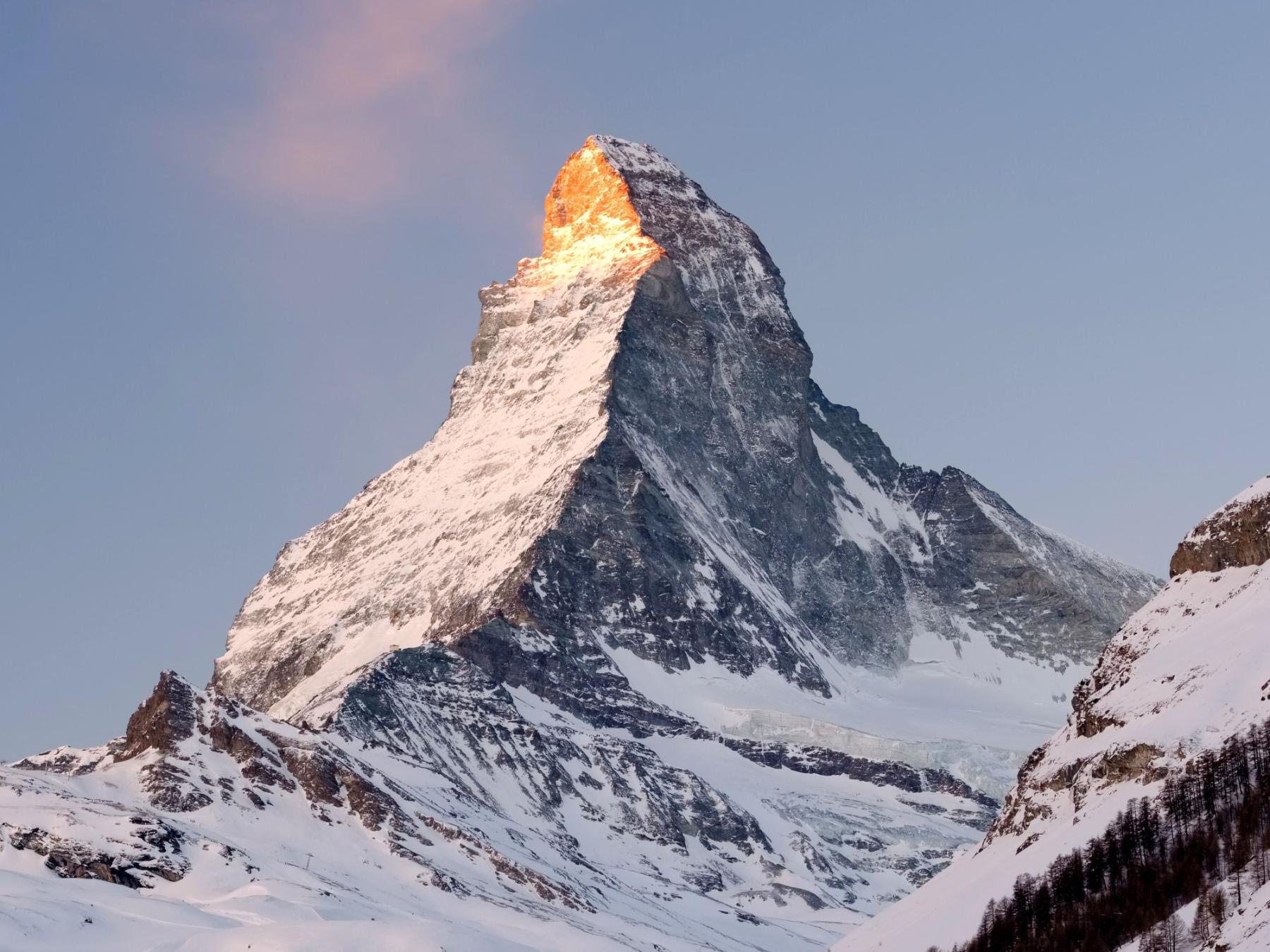 In particular, they explain this by the fact that the light must always have a direct path to the object in order for the glow to appear.

The fact that the observer may not see the sun at this moment (it has gone below the horizon, but the glow appears and lasts for some time) is explained by the difference in perspective. In other words, you cannot see the sun from the ground, but if you fly over the same mountains at that moment in an airplane you will see that the sun has not yet gone below the horizon and the light that falls on the mountains and causes the Alpine glow is direct light from the sun. That is, the higher you are, the later the sunset will be for you.

For the same reason, the clouds in the sky, which are also often colored at sunset in the same beautiful warm colors — from yellow to pink and purple — do not go out for some time yet, because they are at a high altitude and the light of the sun still falls on them, even though it has long since gone below the horizon on earth.

Another strong argument for direct light is the presence of a shadow from the ground, which forms a line between it and the Alpenglow. Therefore, the lower half of the mountains, as closer to the horizon, go into shadow earlier than the higher half, which is farther from it. 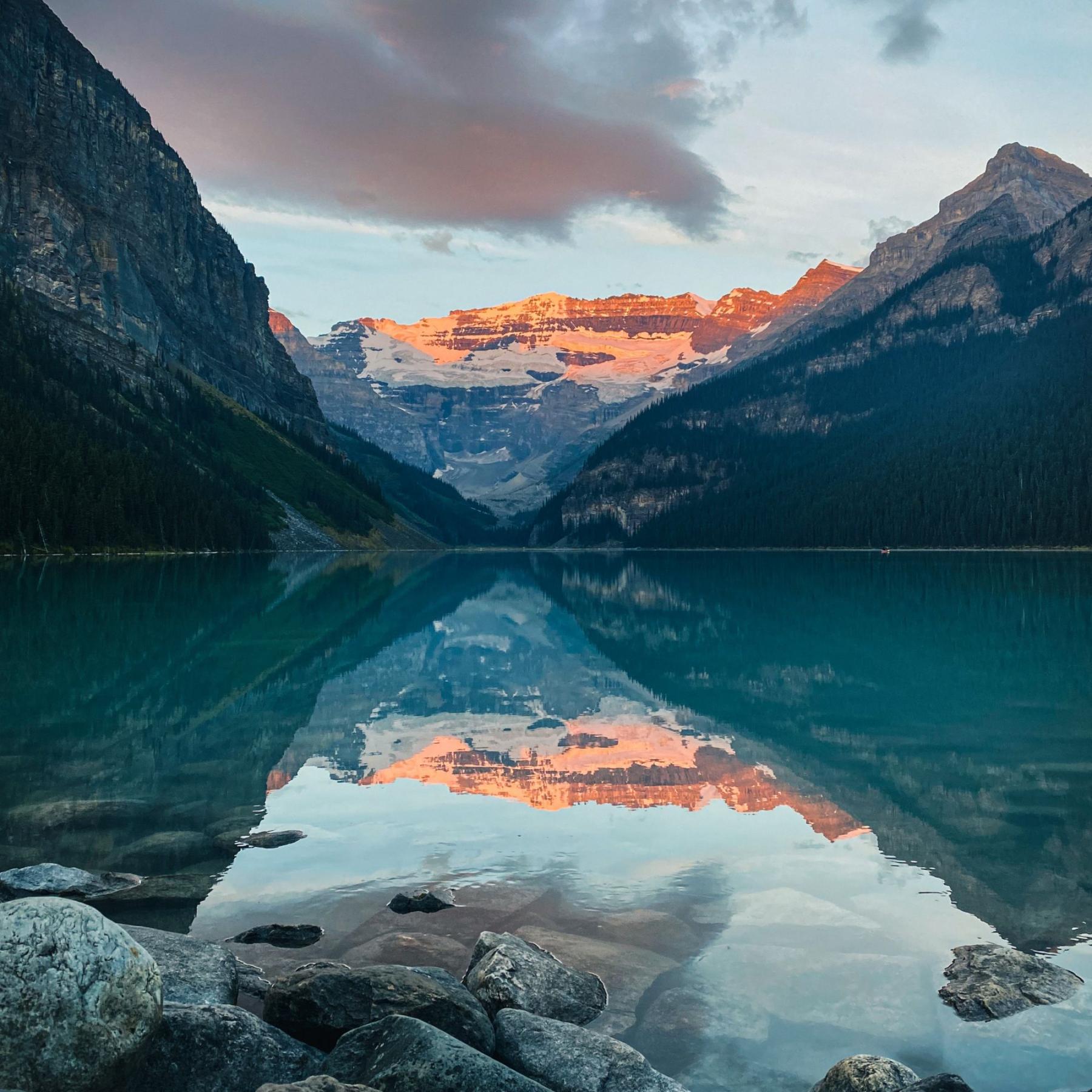 Where and when to observe the Alpenglow?

Now for the best part: the Alpine glow occurs not just in the Alps, as on the cover of this photo book with the same title (an example of the publication described above). It could be any other mountains, for example, in Canada, as in the photos in this article, and not only in the mountains. And yet this is the name that has taken hold in the lexicon. Perhaps because the Alps are the largest mountain range in Europe and one of the largest in the world. By the way, the term “alpine” is often used to refer to other areas. For example, walking in the Himalayas and other mountains you will see Alpine meadows, and in Lapland, there is an area of Alpine tundra, and so on.

In particular, the Alpenglow is best seen in the already mentioned Dolomites in northern Italy, one of the 68 major large mountain subgroups into which the Eastern Alps are divided according to the classification of the German-Austrian Alpine Club (AVE).

These mountains are composed of the stone with the same name, dolomite, or rather, they were named after this mineral, which, in turn, was named after Déodat Gratet de Dolomieu, a French scientist who first described it in one of his scientific papers. Dolomite is a special kind of hard limestone, predominantly white in color, which absorbs sunlight at sunset and dawn better than other mountains in the Alps, making the Alpine glow particularly bright here.

In addition, the Dolomites, which are also called “the most beautiful natural architecture in the world” is characterized by a large number of mountains of unusual shapes, which seem to have been built by hand. These are all kinds of towers and entire fortresses, peaks and pyramids, steep walls (as well as canyons) more than 1,000 meters high (and deep), and so on. In other words, they are like large natural canvases on which light can easily lie, just as an artist applies colorful paints — layer after layer, mixing them, achieving the desired shade.

If we are talking about specific places for Alpine glow observation, a good point could be in front of a big mountain with a wide steep wall or with a panoramic view of a series of peaks. For example, I was able to observe the Alpenglow from the summit of Cima Ombretta (3011 meters), from where one can see many mountains in the central Dolomites, including three well-known ones — Antelao, Pelmo, and Civetta. In addition, Cima Ombretta is adjacent to the southern wall of Marmolada, the highest mountain in the Dolomites (3342 meters). Under the mountain, there is an alpine shelter in which it is possible to spend the night for free. 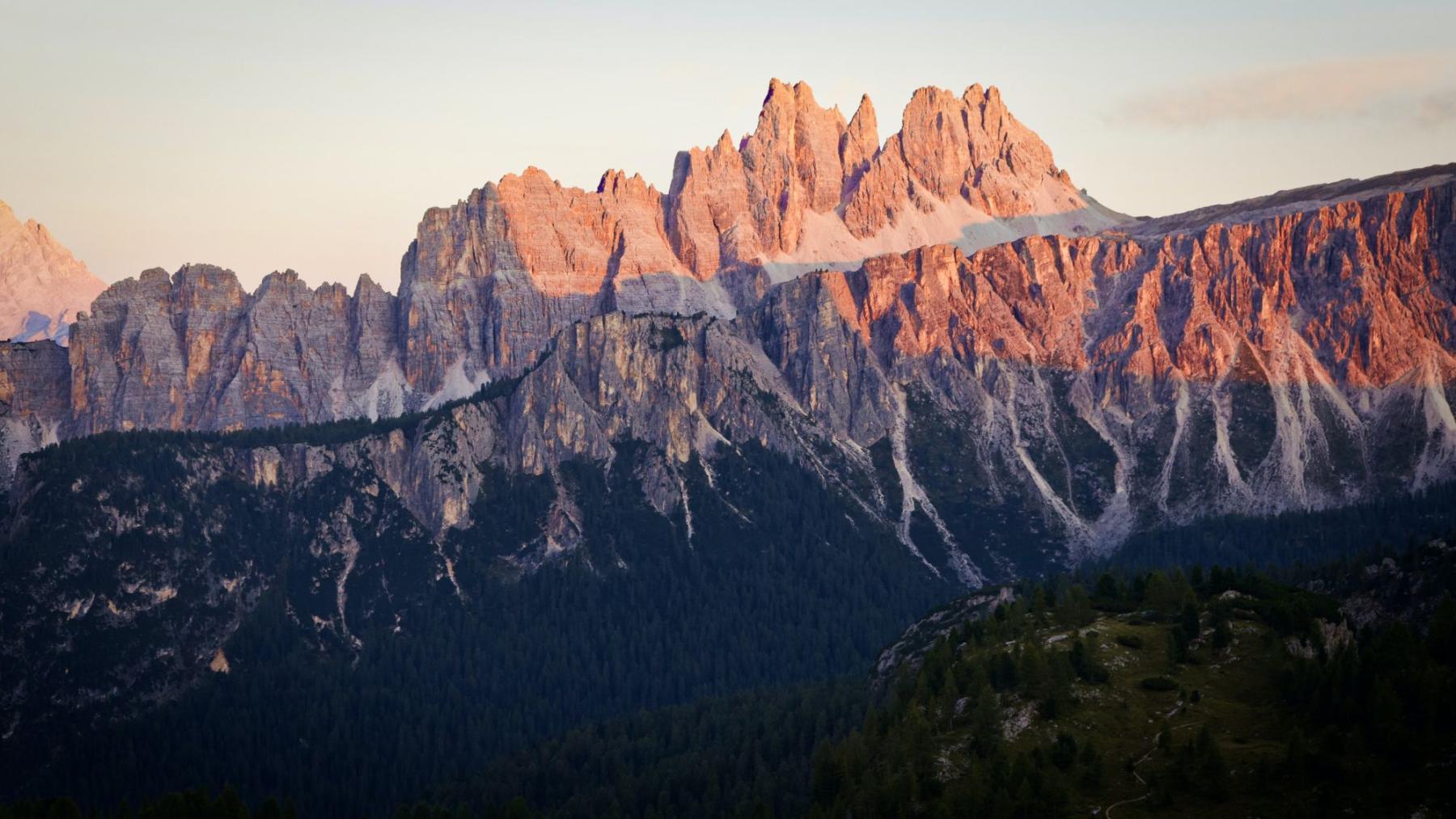 Now let's answer the second important question about observing the Alpine glow — when. In my experience of traveling in the Dolomites, the best time to see it during the warm season is from mid-August to November, when the air in the mountains is cooler and clearer compared to summer when there is a constant haze in the sky. Hence the sunsets during this period are the most beautiful. The Alpenglow is also more clearly visible in the winter from November to April. The mountains turn more orange in late summer and fall and pink in winter, so the latter is even preferable to the former.

It is important to know that the Alpine glow doesn’t happen every evening or morning — you have to be lucky with the weather — as well as with ordinary sunsets, the most beautiful of which do not occur often (and not everywhere). Ideally, it should be a clear sunny evening and morning. There shouldn't be many clouds in the sky. The air temperature also affects the probability of the Alpine glow (the colder, the better). So several factors should come together in the atmosphere.

As with a normal sunset, to see the whole cycle of the glow, it is better to take the position at least an hour before sunset. When the sun goes down over the horizon, also do not hurry to leave: after that, the mountains will also beautifully fade for about another hour, until they become purple and only then completely disappear.

But be careful: it gets dark very quickly in the mountains after sunset — you have a maximum of half an hour before dusk and less than an hour before complete darkness without a single light source. As I watched the sunset on Cima Ombretta, I didn’t make it back to the bivouac in time and lost the trail. The trail itself was also difficult, passing over a huge rockfall. I had already prepared to spend the night in the mountains at 0 ºC without a tent or warm clothes, but I miraculously found the trail. I barely had enough charge on my phone to use it as a flashlight. Therefore, it is better to watch the Alpine glow near the mountain hut or a tent.

At dawn, the situation is the opposite: after sunrise, even in the morning twilight, the trail can usually be seen. The departing full moon also illuminates the road. Returning to the valley after the overnight stay, I watched the Alpenglow for several hours as I descended to the opposite side of the pass. The peaks were painted in bright yellow morning light one by one. It was incredibly beautiful and worth it to walk a couple of dozen kilometers the day before and climb 1600 meters.

How to use Windy.app for Alpenglow hunting

In the app you can find the exact time of sunset and sunrise, as well as the phases of the moon for anywhere on earth in the Light Weather Profile with a set of dozens of weather parameters for hiking, outdoor photography, and travel in general.

The profile can be activated via the icon to the right of the weather models on the spot screen. 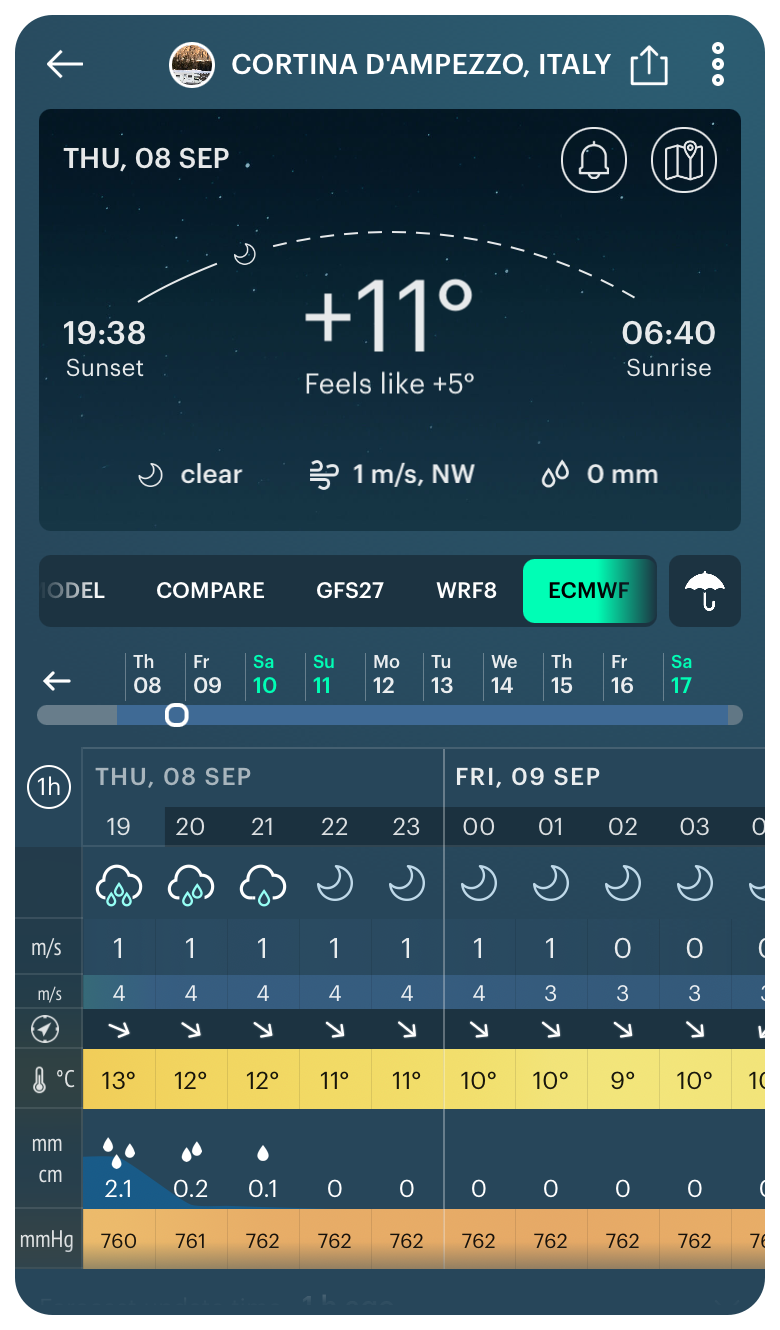 Lite Weather Profile in the Windy.app for iOS

You can also add these parameters to any other profile — for biking, skiing, paragliding, and more. 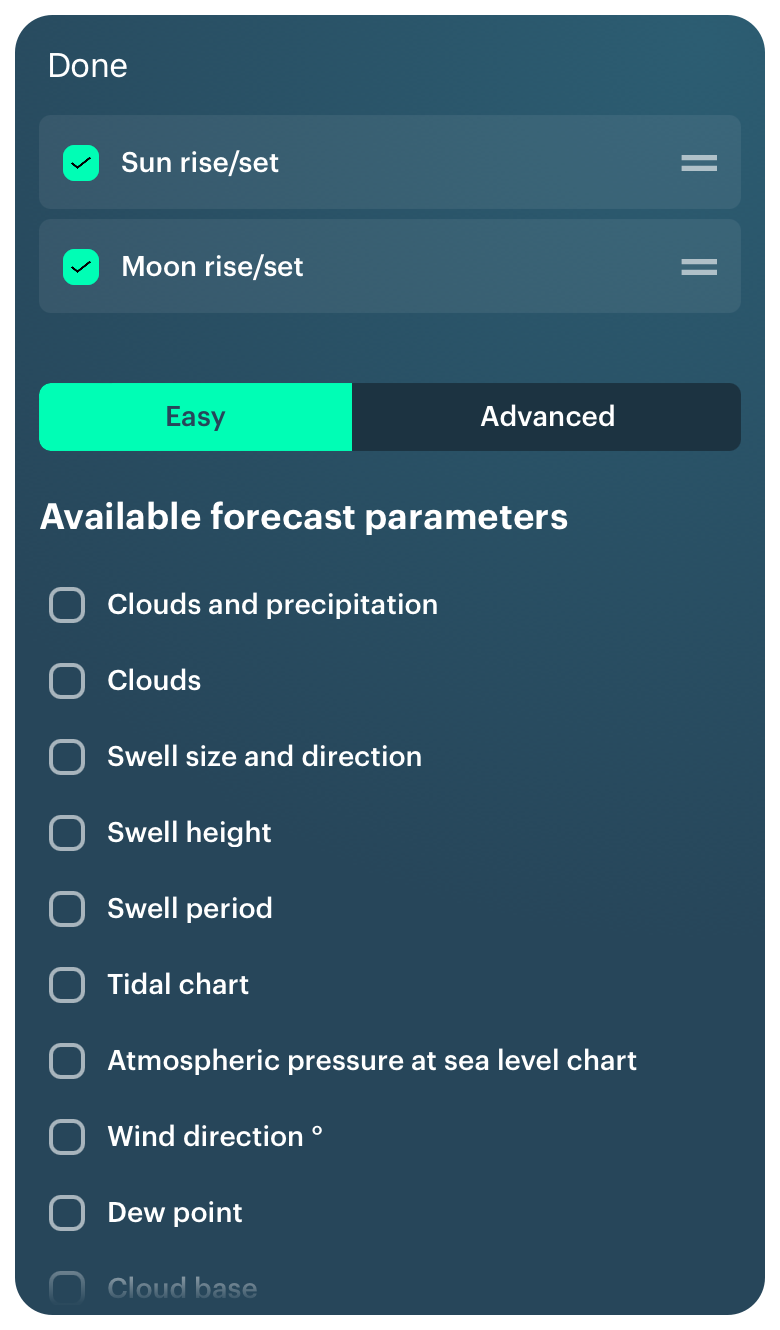 Or, even better: create your own custom profile for observing the Alpenglow, including other important weather parameters that influence the formation of this phenomenon. I would recommend the following: 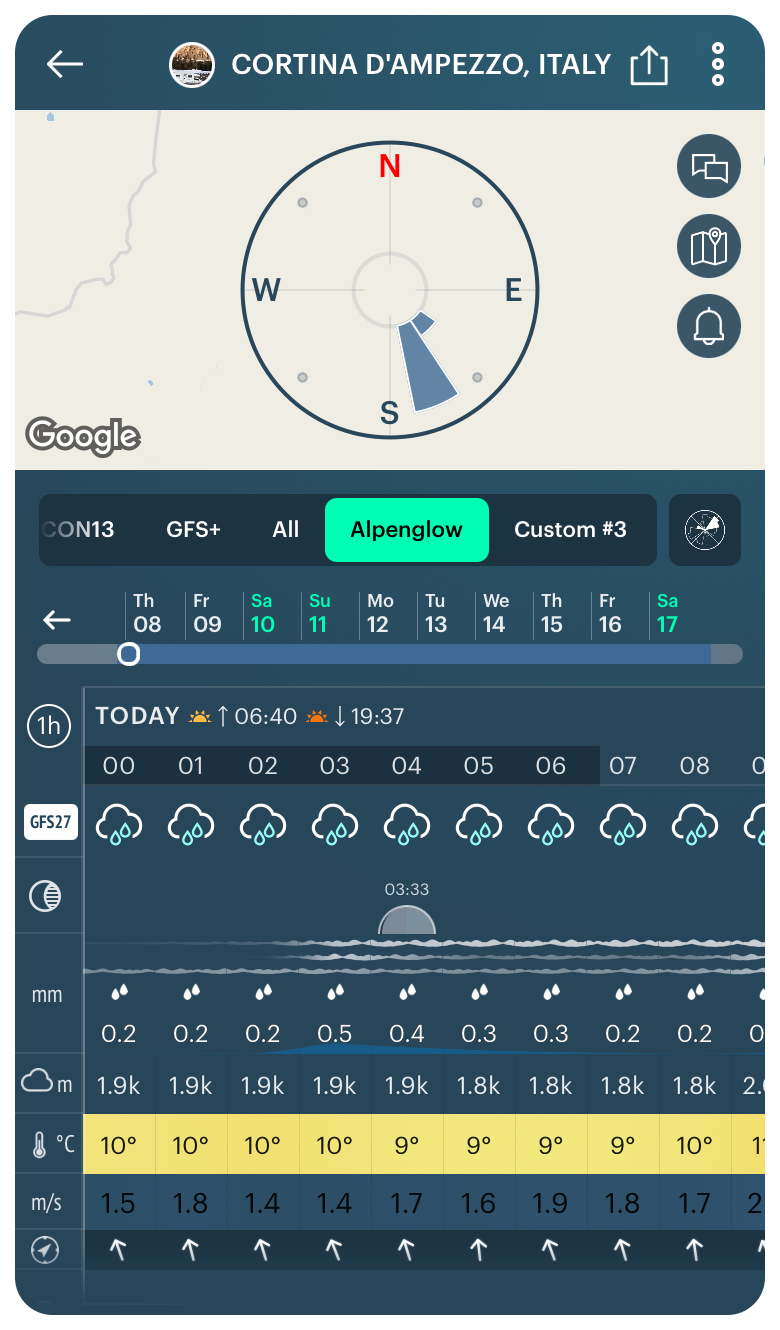 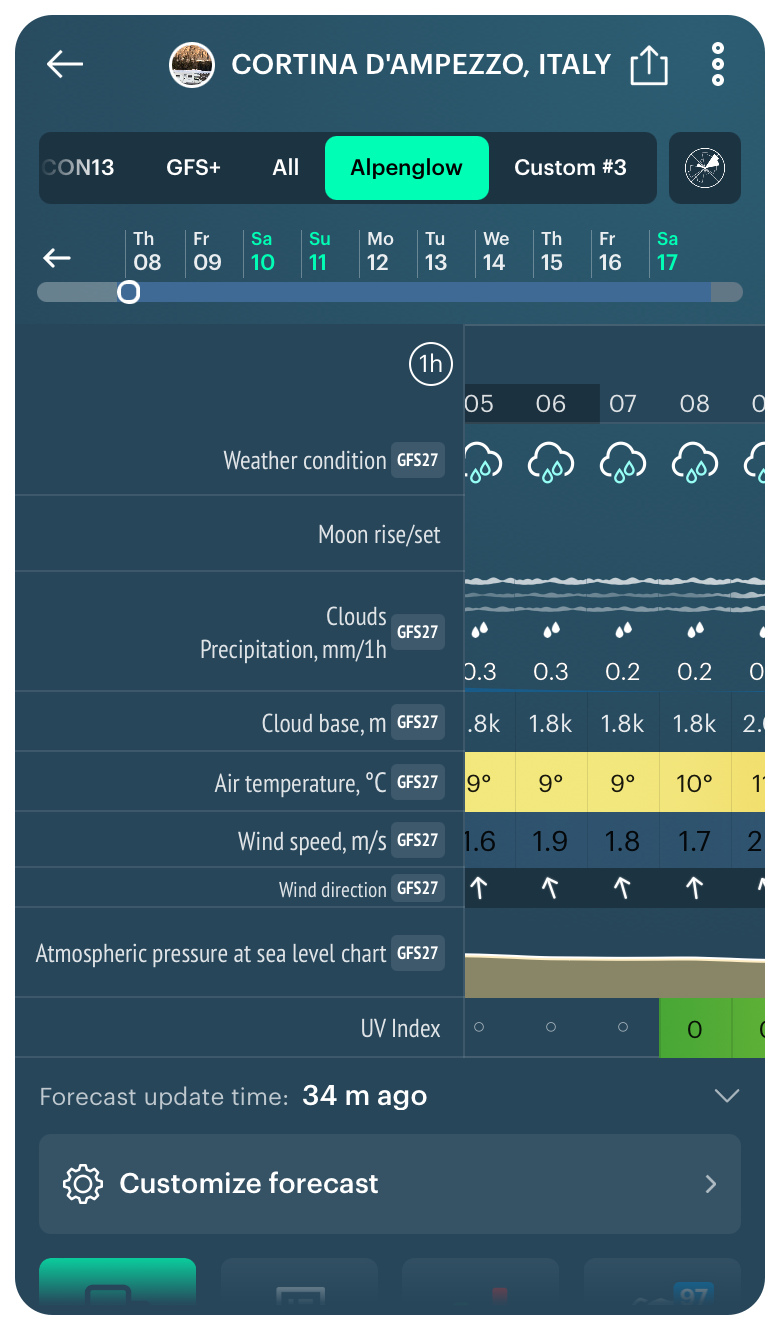 If you want, for convenience, swap the parameters by clicking on one of them and holding to move the line above or below. 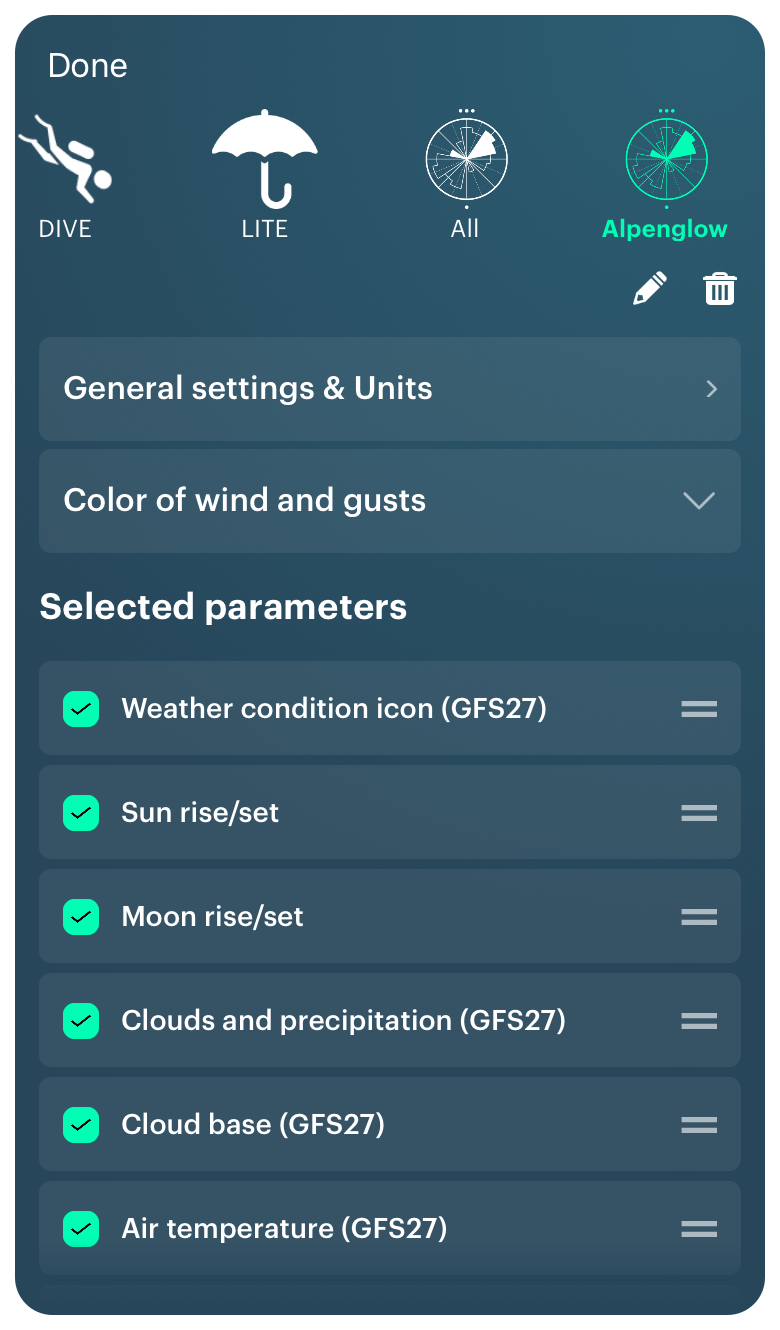 For mountaineering in general in winter, when the Alpine glow reveals itself in all its beauty, you will also find the Snow Weather Profile useful, with parameters such as upper and lower ski station temperatures, snow data, and more. 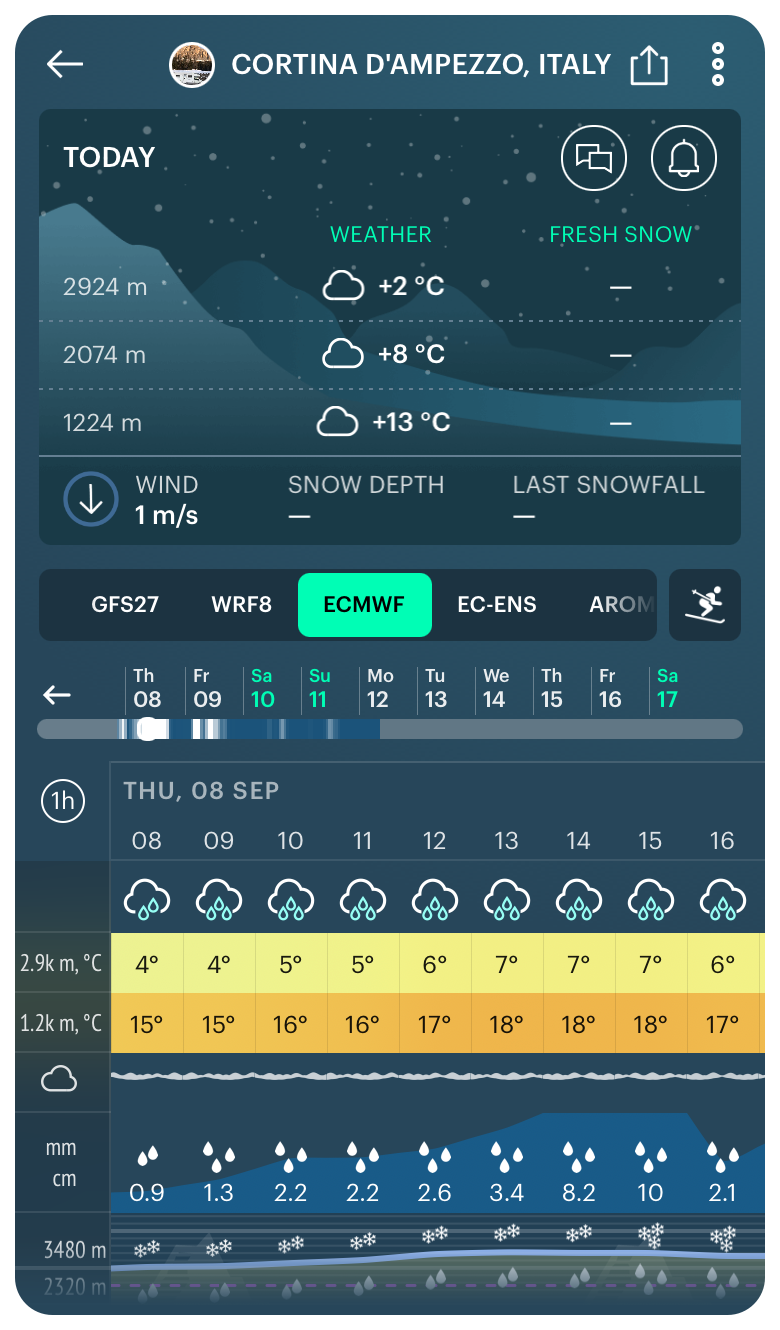 Snow Weather Profile in the Windy.app for iOS

Last, but not least, check out the weather history to see what weather the meteorologists predicted for each of the past 10 years, accurate to the day. 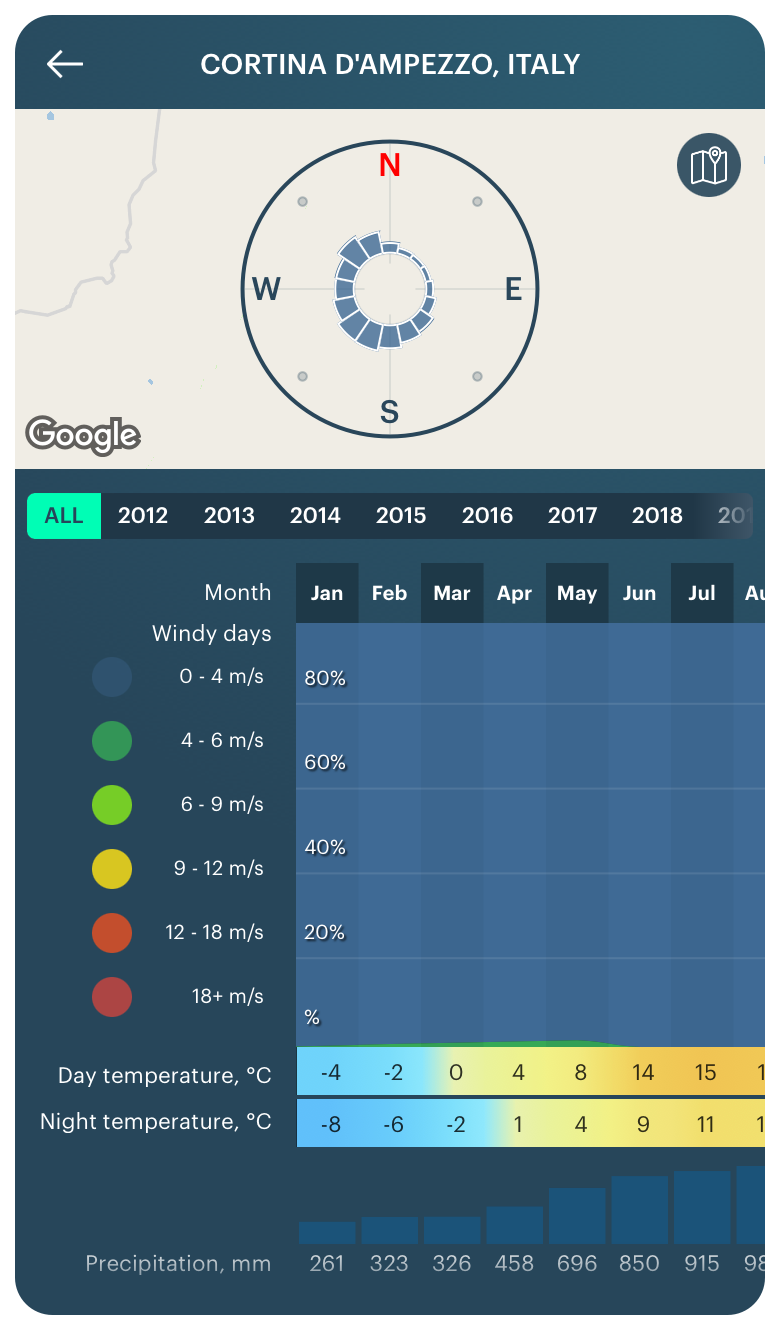 Weather history in the Windy.app for iOS

Text: Ivan Kuznetsov, an outdoor journalist, editor and writer from the Dolomites, Italy, and Karelia, Finland, with 10 years of professional experience. His favorite sports are hiking, cycling and sauna. Read his other articles. Other Windy.app team authors contributed to this guide

You will also find useful other lessons on atmospheric optics

Blue color of the sky

Halo — circle around the Sun

Looking at the stars