What is extreme weather and how it relates to climate change

It is believed that the climate has been influenced by humans for centuries and now we can face the results of this effect. The question is: what is man's role in it? The 2021 United Nations report and other studies says: "It is a big role". In this article, we will understand what extreme weather is, what are the main types of extreme weather events, and how it relates to climate change.

What is extreme weather?

There are many definitions of extreme weather events, so let’s take only one given by a respected organization called Climate Hubs of the US Department of Agriculture (USDA). They describe it as “occurrences of unusually severe weather or climate conditions that can cause devastating impacts on communities and agricultural and natural ecosystems”. In other words, it's not just bad weather, it's extremely bad weather.

The main types of extreme weather are waves of heat and cold, heavy rains and snowfalls or no precipitation for a long time, various types of storms, tropical cyclones (hurricanes and typhoons), and some others.

All of these types of extreme weather lead to wildfires, droughts, excessive glaciation, floods and mountain avalanches, and other natural disasters. Extreme weather simultaneously affects humans, plants, and animals, as well as the entire biological system of the planet.

Let's talk more about each of them:

A heat wave is a period of abnormally hot weather lasting days to weeks. This extreme weather might cause droughts and wildfires. Only in recent times in 2021, there have been huge wildfires in Algeria, California, USA, Turkey, and Siberia, Russia. They have caused enormous disaster for billions of dollars and many human casualties, the actual number is still to be counted.

The cold wave is a rapid drop in air temperature that can also be prolonged. It causes freezes and hurts agriculture, industry, and different human activities. The temperature threshold above which it is considered too low depends on the region of the planet.

No rain or drought is also a long period of time caused by a lack of rainfall or a presence of heat wave in an area. Drought is usually a period of 15 days but it could be a longer dry season. Droughts cause the death of plants and animals, as well as harm people in many ways. 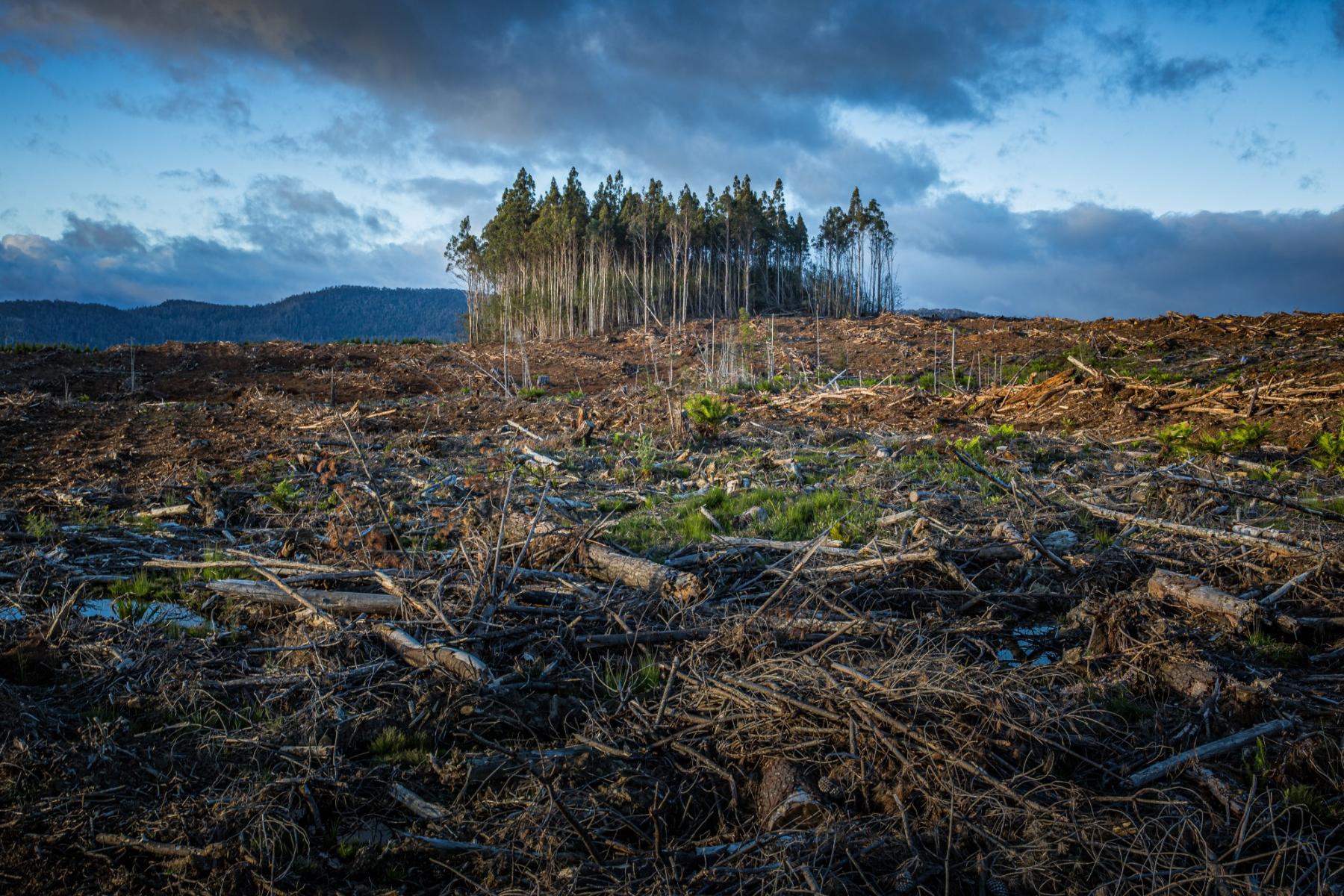 Downpour is heavy rain or an unusual amount of precepitation than falls in a certain period of time. Usually, heavy rainfall is more than 1 mm/h or more. Downpours cause flash floods, river flows, landslides, and other hazards. According to the same IPCC study, heavy downpours, which lead to flash floods, occur 30 percent more frequently today than in the previous decade. Recent events leave no doubts in the scientists’ words. Huge floods in the Philippines and in Germany caused human casualties and made many residents leave their homes.

Heavy snowfall is the same as heavy rain, only with snow. Heavy snowfall followed by slow warming and rain can lead to the creation of dangerous avalanche conditions. They are also a reason for blizzards and snowdrifts.

The storm is a relatively short period of strong wind and other related extreme weather phenomena. It can be a dust storm or sand storm, hail storm, snowstorm, sea storm and thunderstorm. The most “thunderstormed” place is considered to be the northern part of Lake Victoria in Uganda, Africa. There the thunder is heard on average 242 days of the year.

A tornado is a vortex of air that occurs in a cumulonimbus (thunderstorm) cloud and spirals toward the ground. Tornadoes travel many kilometers and carry strong winds, rain, and hail with them. A tornado in the Czech Republic in June 2021 killed five people and left hundreds injured and thousands homeless. 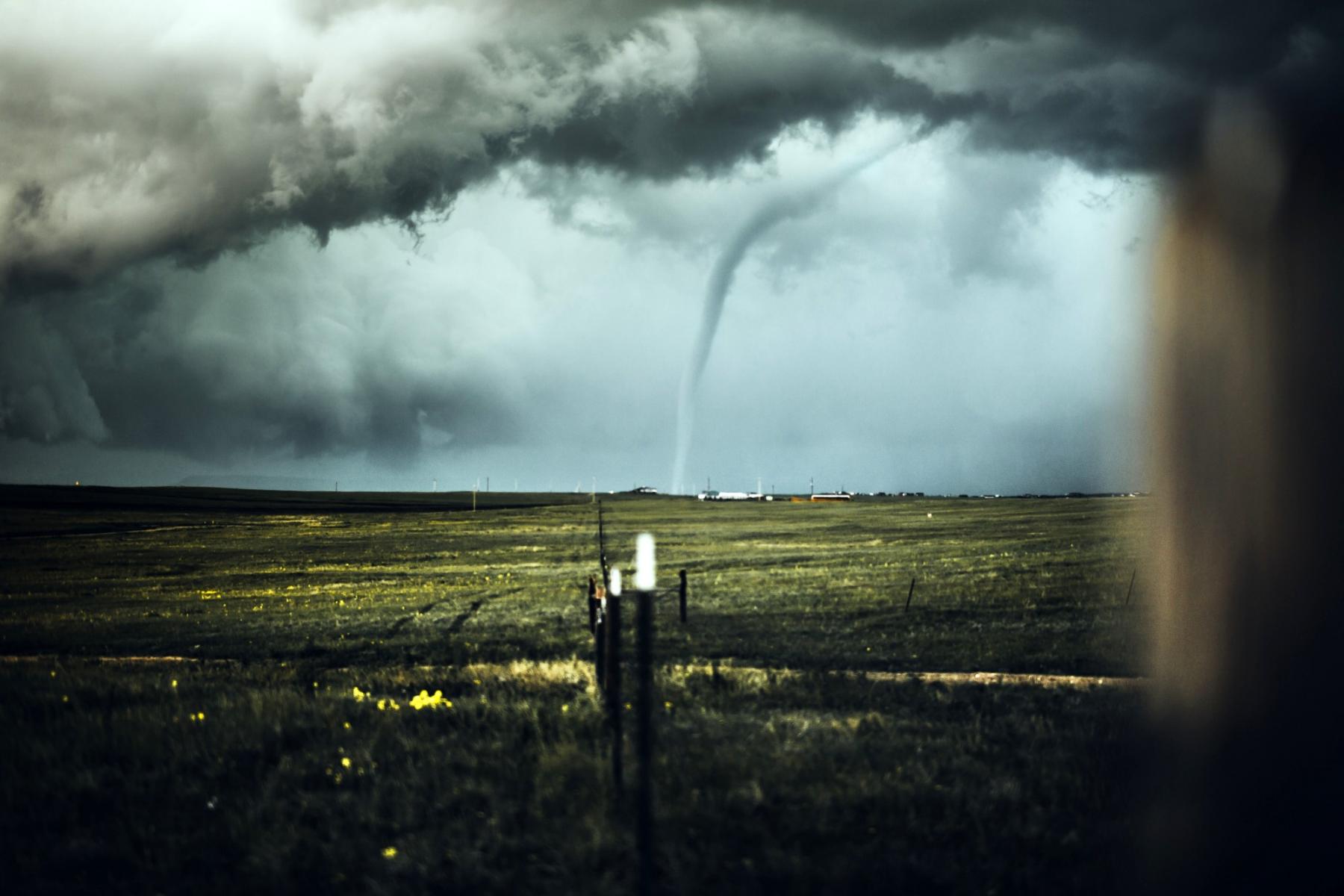 A tropical cyclone is a type of cyclone that forms over the Atlantic Ocean (hurricane) or Eastern Pacific Ocean (typhoon), which produces strong winds and heavy rain, as well as thunderstorms. This is the most devastating kind of extreme weather. In recent times, scientists have noticed a greater proportion of major storms (ranked category 3 or higher), which means that hurricanes and typhoons have grown stronger. For example, tropical storm Elsa in 2021 made a dangerous landfall after 180,000 people evacuated.

A tsunami is a giant wave caused by an earthquake or volcanic eruption under the sea. The wave can travel many kilometers (miles) inland, destroying entire cities in its path, as it happened in 2004 in Southeast Asia.

Lightning is a series of electrical discharges occurring in clouds during a thunderstorm. Lightning is deadly for both various objects and people in the air and on the ground, which lightning reaches about 40 percent of the time. 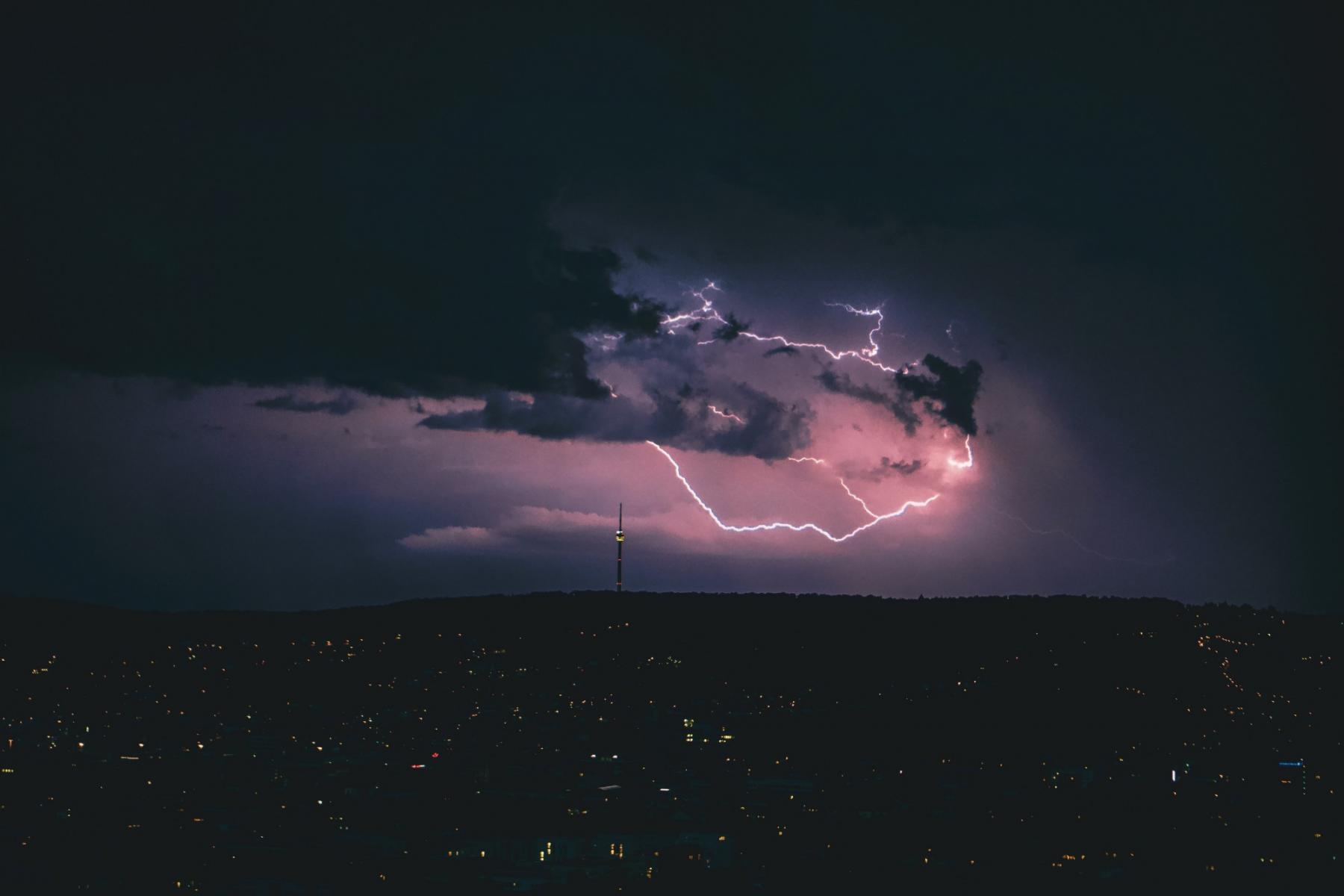 What does extreme weather events have to do with climate change?

According to many scientists and their studies, the amount of extreme weather events in the past 50 years has increased. One of the main reasons for that is human activities. It seems that just now such statements have gained critical mass and it is no longer possible to argue with them: the climate is changing and it is man's fault. Here are some examples:

The importance of the IPCC document is especially high. The IPCC is considered to be the leading authority on climate science. The new report unites more than 230 authors from 66 countries around the world. The main goal is to analyze climate changes and forecast them. 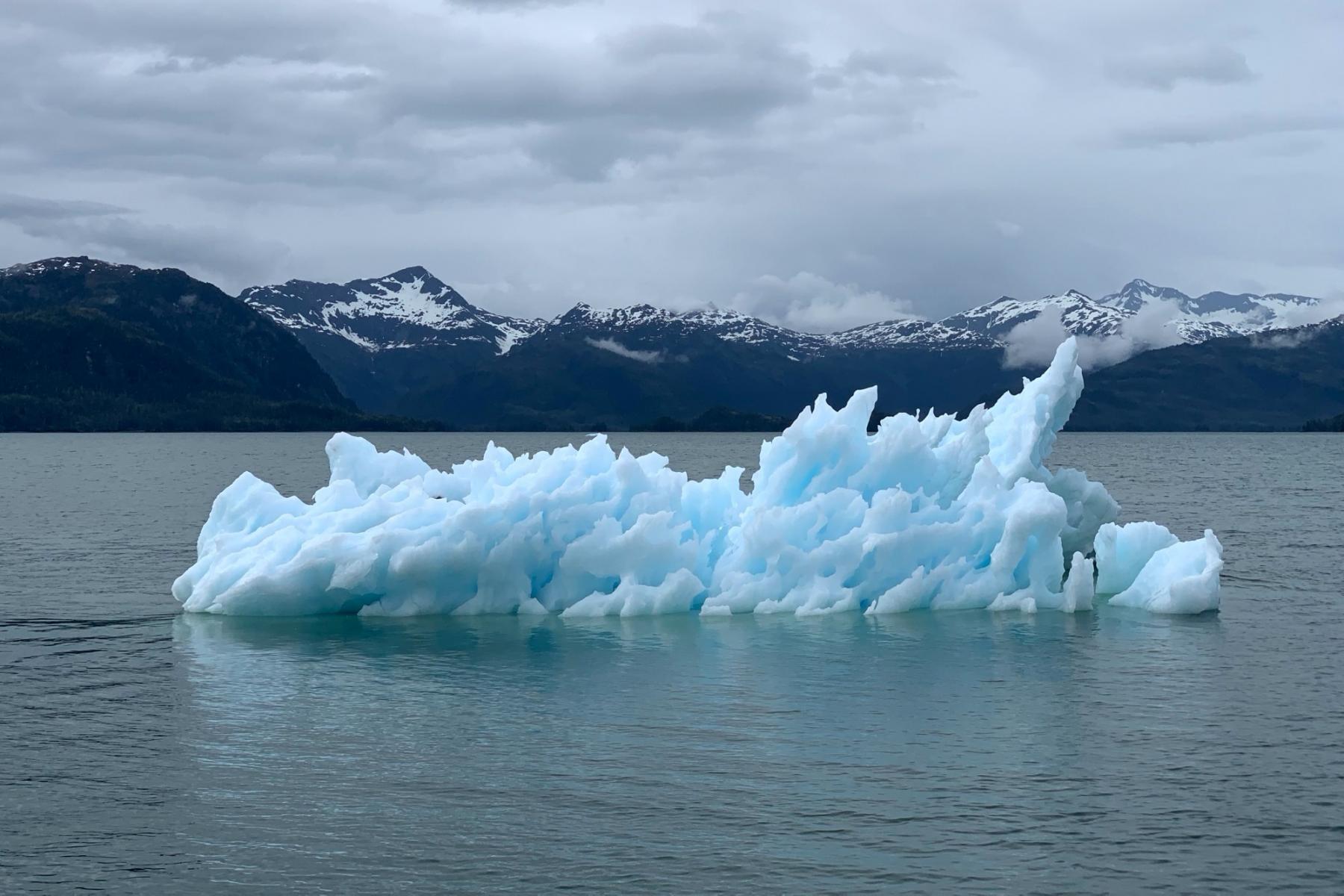 Another merit of the IPCC report is that the authors are trying to predict what to expect from the extreme weather in the future. If we don’t do something about it, such events will happen more frequently. There will also be a chance that several extreme events will happen at the same time. Another problem is that it will be harder to predict them, so we will not know where and what extreme event happens, which might cause even more devastation.

However, predicting such extreme weather events is a very hard and complicated task. It can take much time to predict where the next hurricane or flood will happen but time really matters there. The earlier you predict an extreme event, the earlier you can start preparing for it: evacuate people from the danger zone, provide locals with food and necessary equipment, and so on.

The IPCC report shows that human actions still can determine the future course of climate. Panmao Zhai, IPCC Working Group I Co-Chair, explained the ways we can stabilize the climate: “Stabilizing the climate will require strong, rapid, and sustained reductions in greenhouse gas emissions, and reaching net-zero CO2 emissions. Limiting other greenhouse gases and air pollutants, especially methane, could have benefits both for health and the climate”. 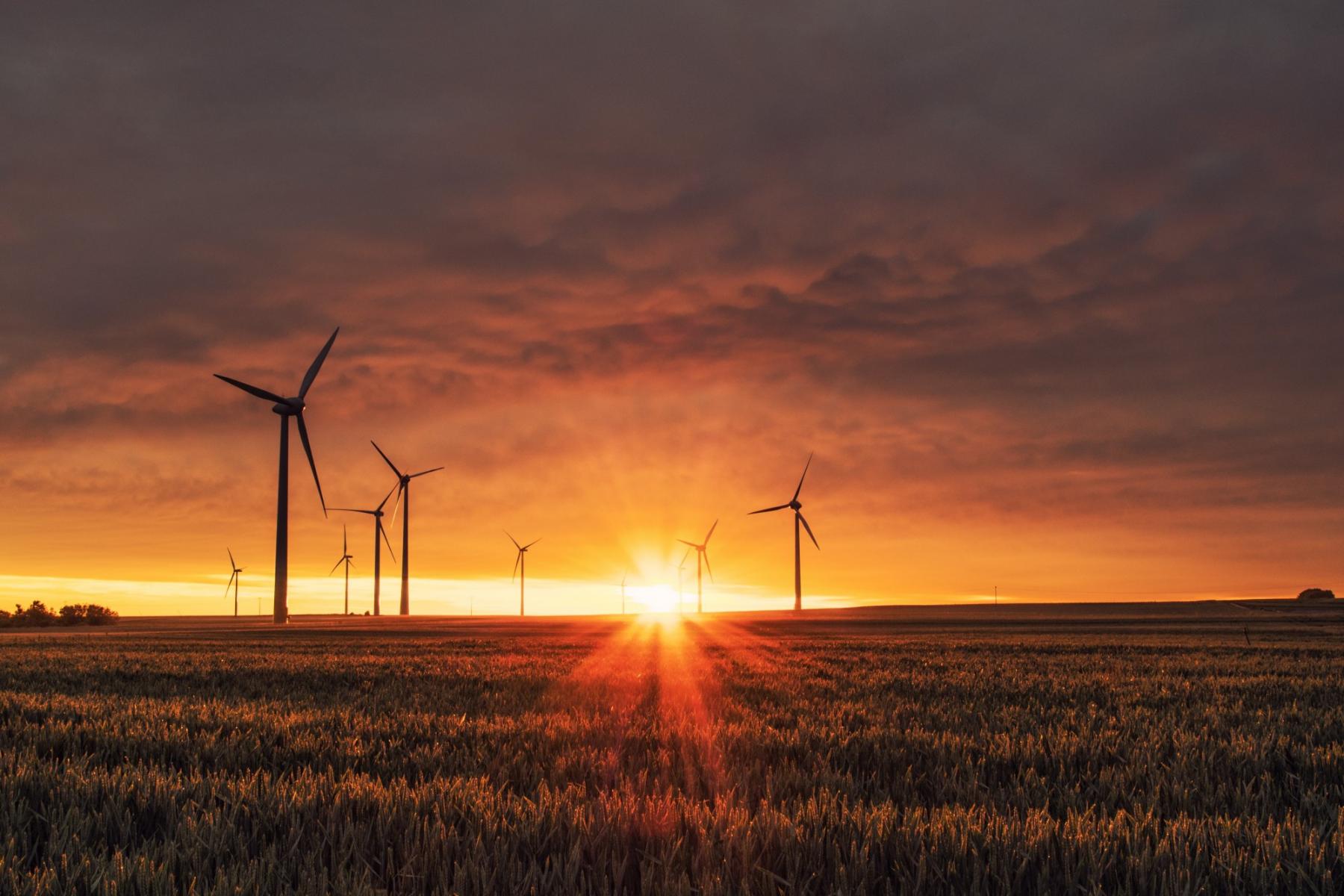 Where to find extreme weather forecasts?

As a professional weather forecast app, the Windy.app can help you to be notified about extreme weather. To always stay informed, use these different features:

The app provides you with the best wind forecast you’d like to have: wind speed, wind direction and wind gusts, 10 global and regional weather models, Compare Mode to see all forecasts on one chart and choose the most accurate for your region, and other features.

How to get wind forecast in the Windy.app:

2. Check the wind direction and speed for your favorite or the nearest spots.

3. Open these spots to get more info. 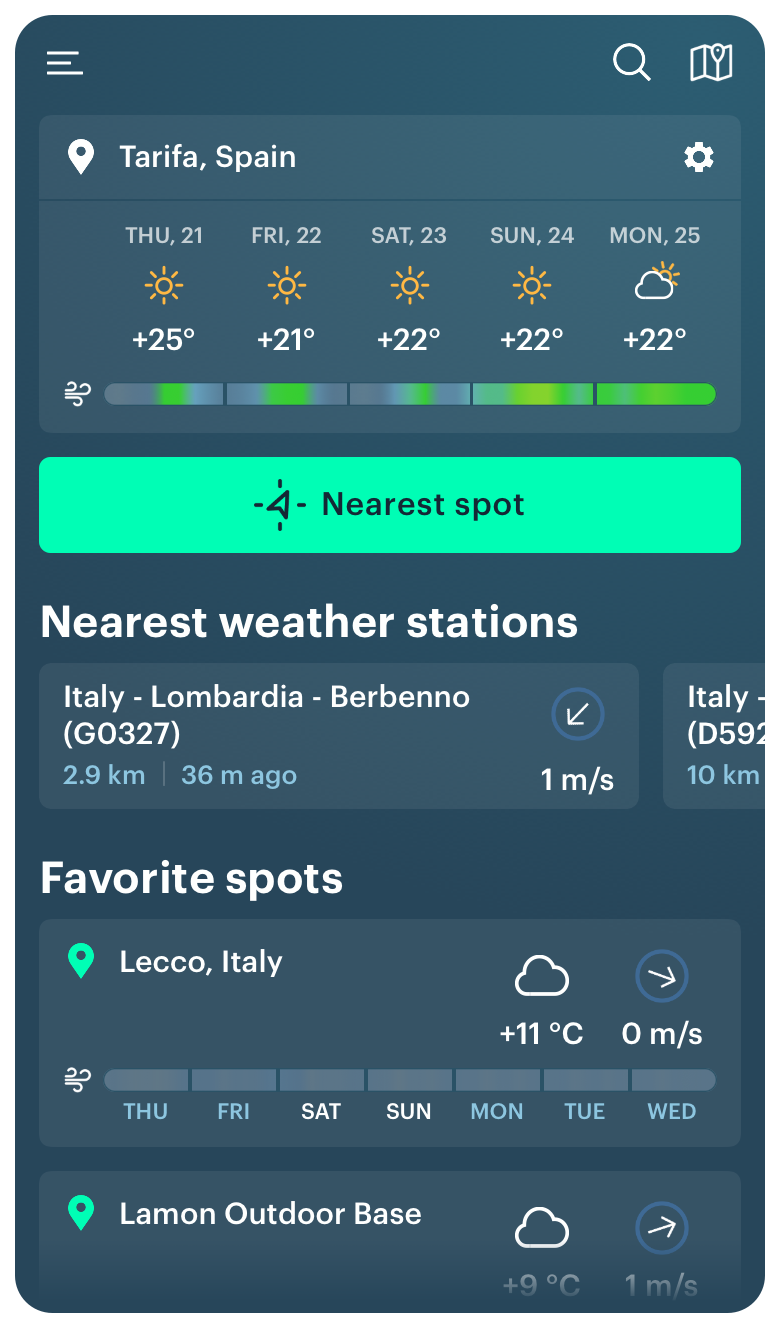 Wind forecast in the Windy.app for iOS

Set notifications about the best or dangerous wind using our wind alerts. With it, you will always be notified if the wind is going to be too harsh for your outdoor activity. This will always let you know about upcoming storms because of detected high wind speed.

How to set up Wind Alerts in the Windy.app:

2. Tap on the bell sign at the right upper corner of the screen.

3. Set it up according to your needs. 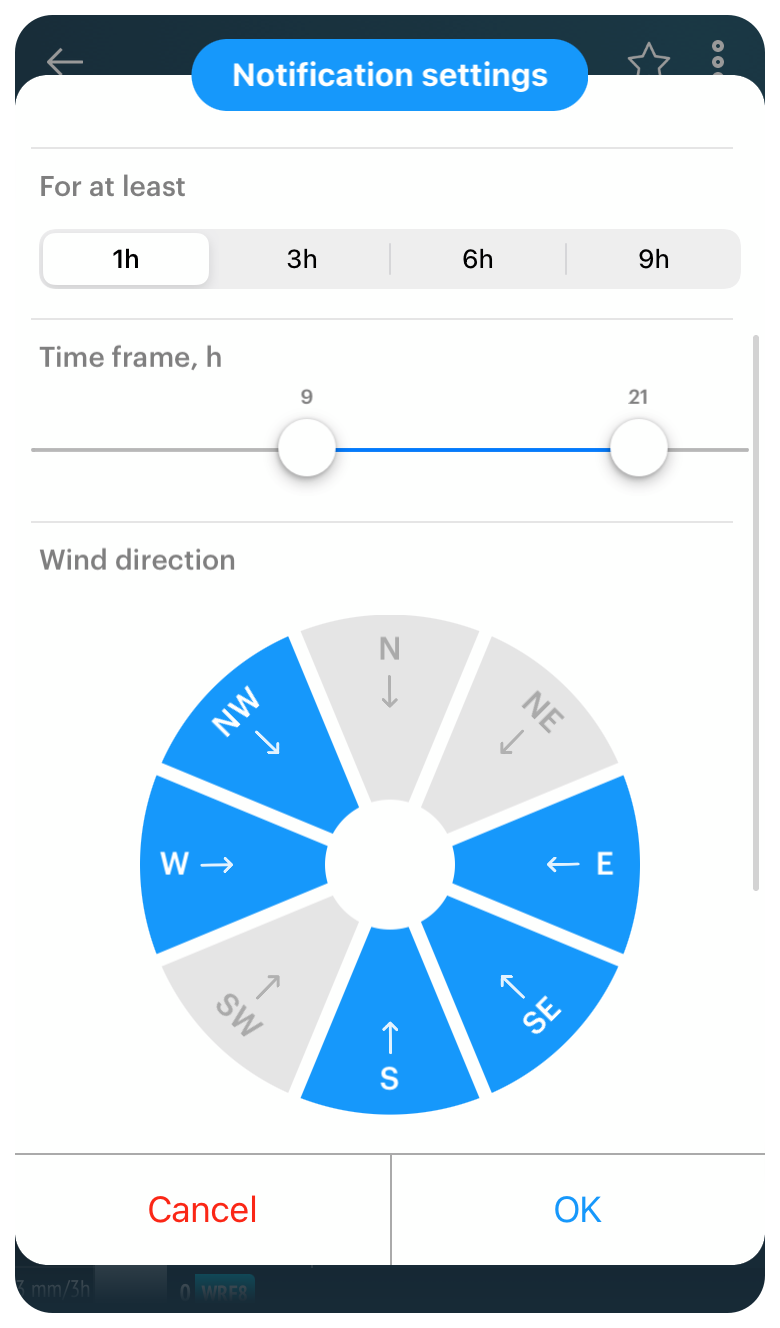 Wind Alerts in the Windy.app for iOS

How to find precipitation forecast in the Windy.app:

1. Open Weather Map from the Home Screen of the app or your spot.

2. Choose the Precipitation layer in the slider.

3. Move the time scale at the bottom of the screen. 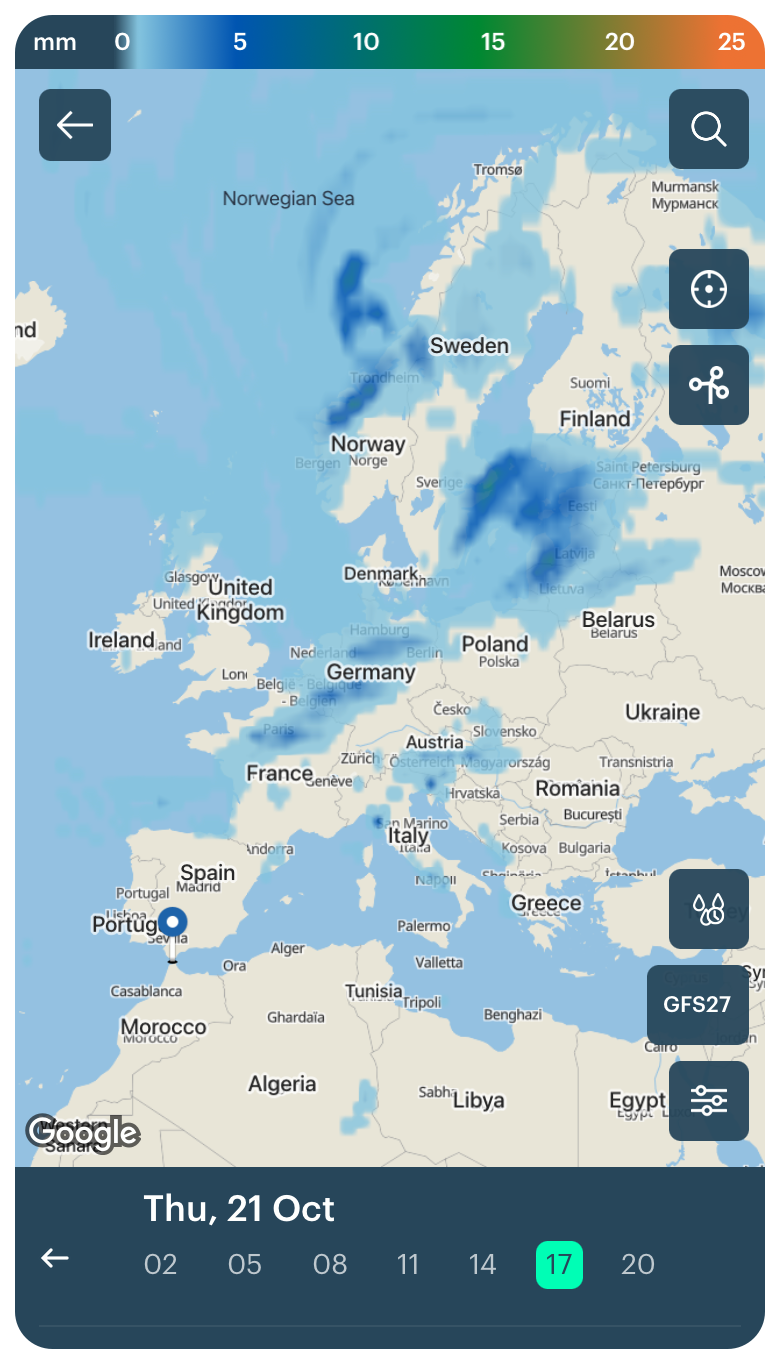 Precipitation forecast in the Windy.app for iOS

With the Weather Fronts feature, a boundary of huge air masses, you can determine cold fronts, which bring colder air and good visibility, and warm fronts with the sky completely overcast, rains, and sometimes thunderstorms.

How to read weather fronts in the Windy.app:

1. Open the Weather Map from the Home Screen of the app.

3. Check the front on the app: red, blue, orange, and purple lines. 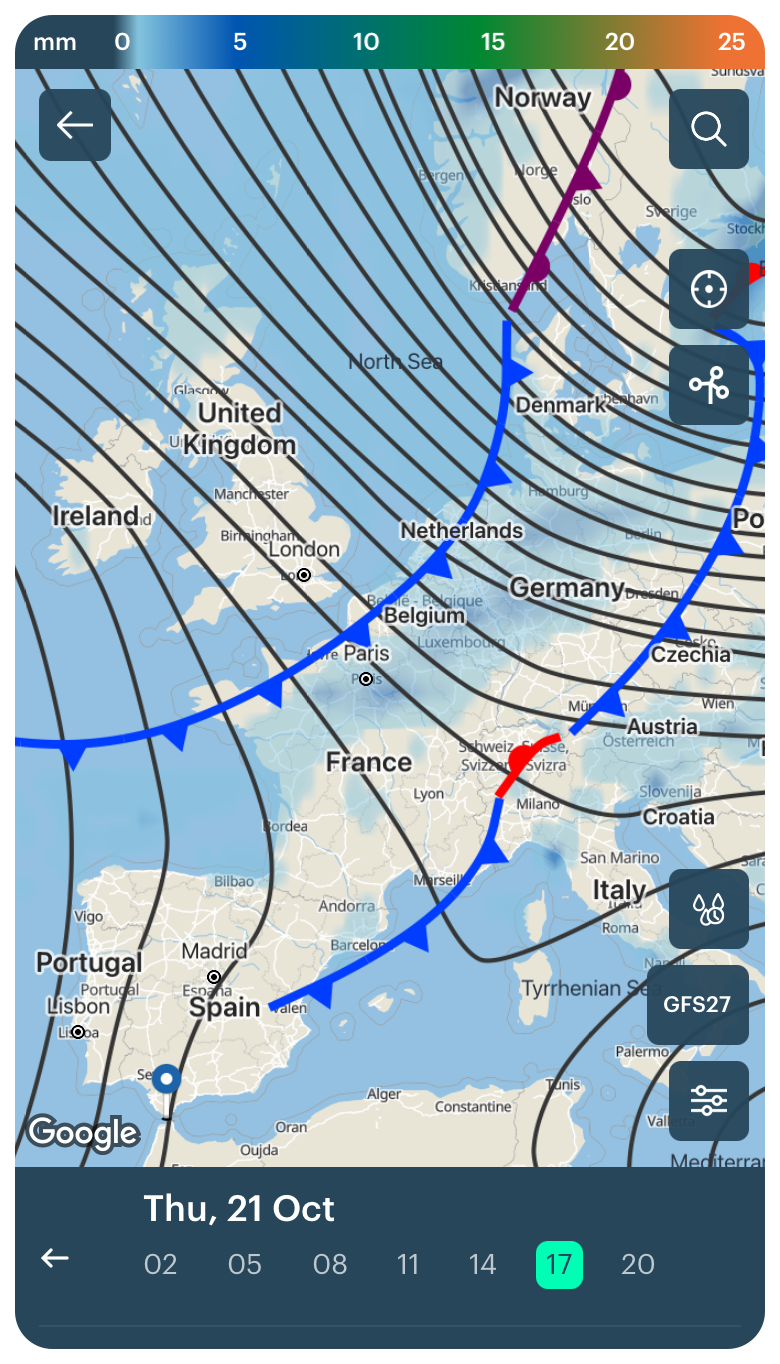 Weather fronts in the Windy.app for iOS

Weather History, statistical data on the state of the atmosphere and the ocean, collected on the basis of regular meteorological observations, is a feature related to climate change. It can help you to know what the weather is usually like at the place, what the wind pattern is there and also the average amount of precipitation.

1. Open your favorite spot or the nearest one to your location.

2. Scroll down until you see the “Archive” button and tap on it, then tap on "Detailed Weather Archive" to get more weather information.

3. Choose the year, month, and day and check weather info. 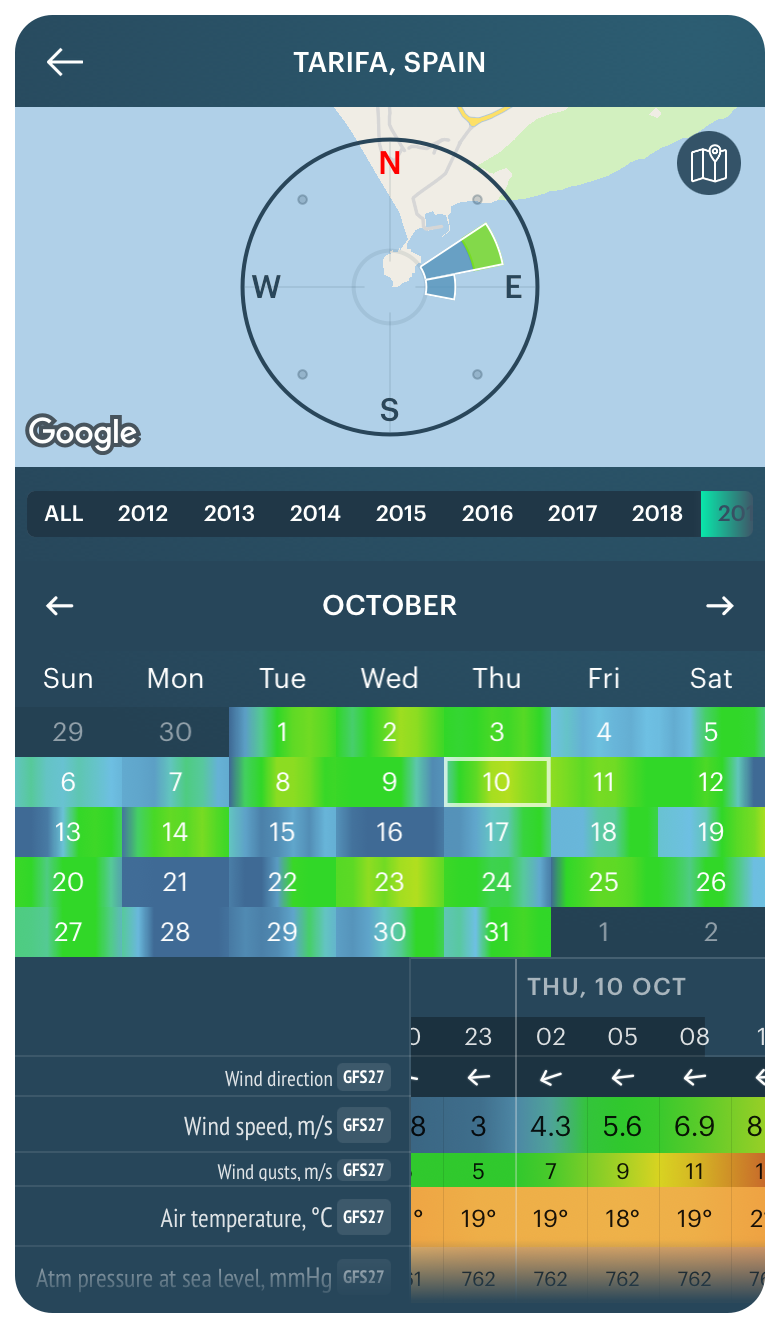 Weather history in the Windy.app for iOS

This post was originally published on October 10, 2021, on the Windy.app blog.

What does the 10 days weather forecast mean