How to read wind forecast to get better outdoor experience

The wind forecast is one of the several main types of weather forecasts, which is necessary for those who are engaged in various wind sports and outdoor activities. More: it is impossible to practice some of them as kitesurfing or sailing without this weather element. In this article, we will understand what a wind forecast is and how to read it using the Windy.app as an example.

What is the wind forecast?

A wind forecast is a forecast that is produced by various weather services around the world to predict wind conditions in the nearest future.

As with other weather forecasts, it is made according to one of the common global or local weather models for the next 10 days, but can be more, with update frequencies ranging from 4–8 hours to one hour with a standard step of 3/1 hour(s).

Wind forecast consists of several wind elements (characteristics) which are measured in certain units and represented in several ways, including standard forecast tables and wind rose as well as more advanced interactive maps and charts that you’re probably already used to. Special wind forecasts include additional elements which you can’t find in standard ones.

You can also forecast wind independently using other weather elements, such as areas of low and high atmospheric pressure.

Finally, the winds can be of certain types, each with its character if we can say so, that is stronger, colder, more constant, or not, and so on. Knowing the type of wind, you can expect certain conditions in advance and be prepared for them.

To summarize: by knowing all the components of the wind forecast, you can successfully read it and make conclusions about its use for your specific situation whether it’s for sport, business, scientific research, or something else. 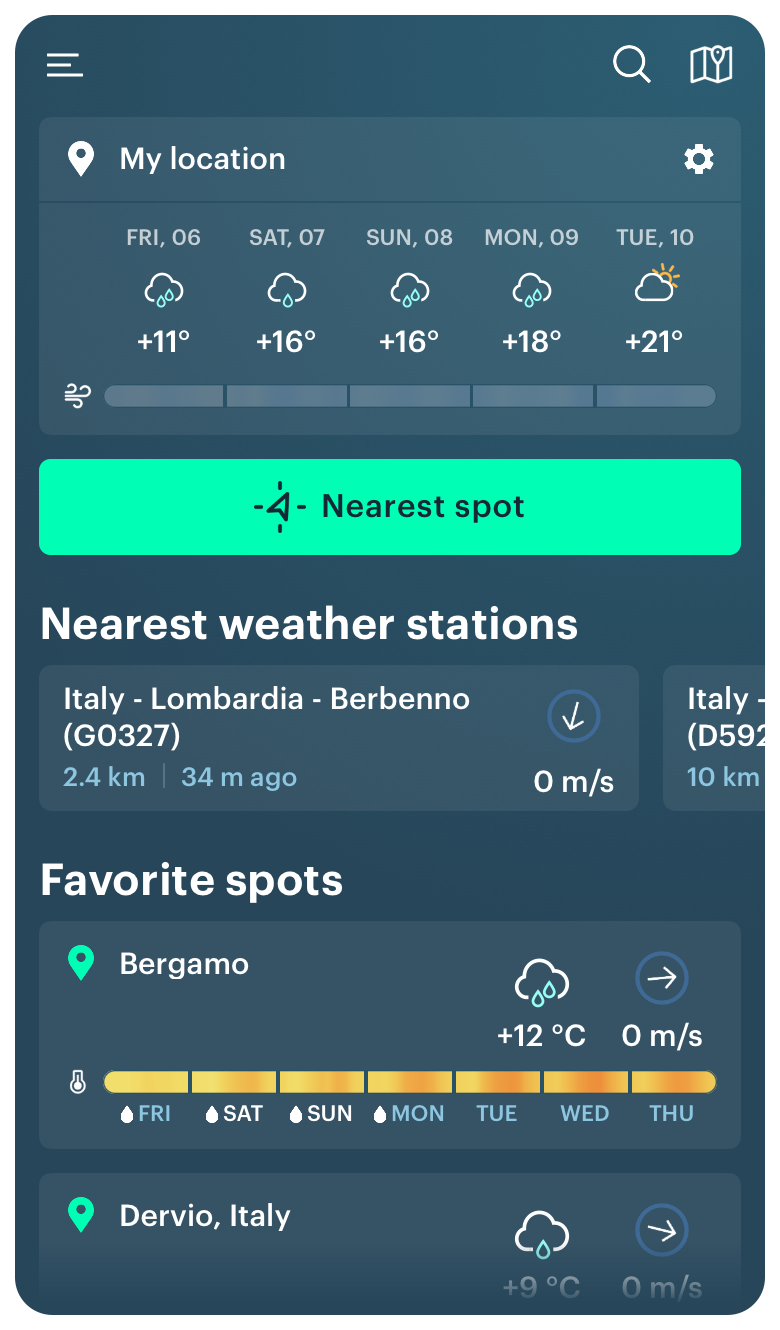 Wind forecast on the Home screen of the Windy.app for iOS

How to read wind forecast?

To read the wind forecast you need to know the following five things: 1). The basic elements that make up the forecast, 2). The units of measurement of wind, 3). Forecast presentation options, 4). The additional elements, indices, and tools with which the wind is measured, and 5). Wind types.

Let’s briefly go over everything in order.

The wind has two basic elements and one additional but common one with which meteorologists describe its condition: wind direction, wind speed, and wind gusts. The first two are in every regular weather report, the last you might see more in specialized forecasts.

Wind speed. Wind speed is the distance the wind travels in a period of time. The faster the wind, the stronger and more destructive it is, including tornadoes and hurricanes that sweep everything in their path. Conversely, a very slow, weak wind may not be noticed at all.

Wind gusts. Wind gusts are short-term increases in wind speed (and strength) of up to 20–30 seconds on average. This is a very important parameter because gusts can exceed the wind speed by three, five, or more times. 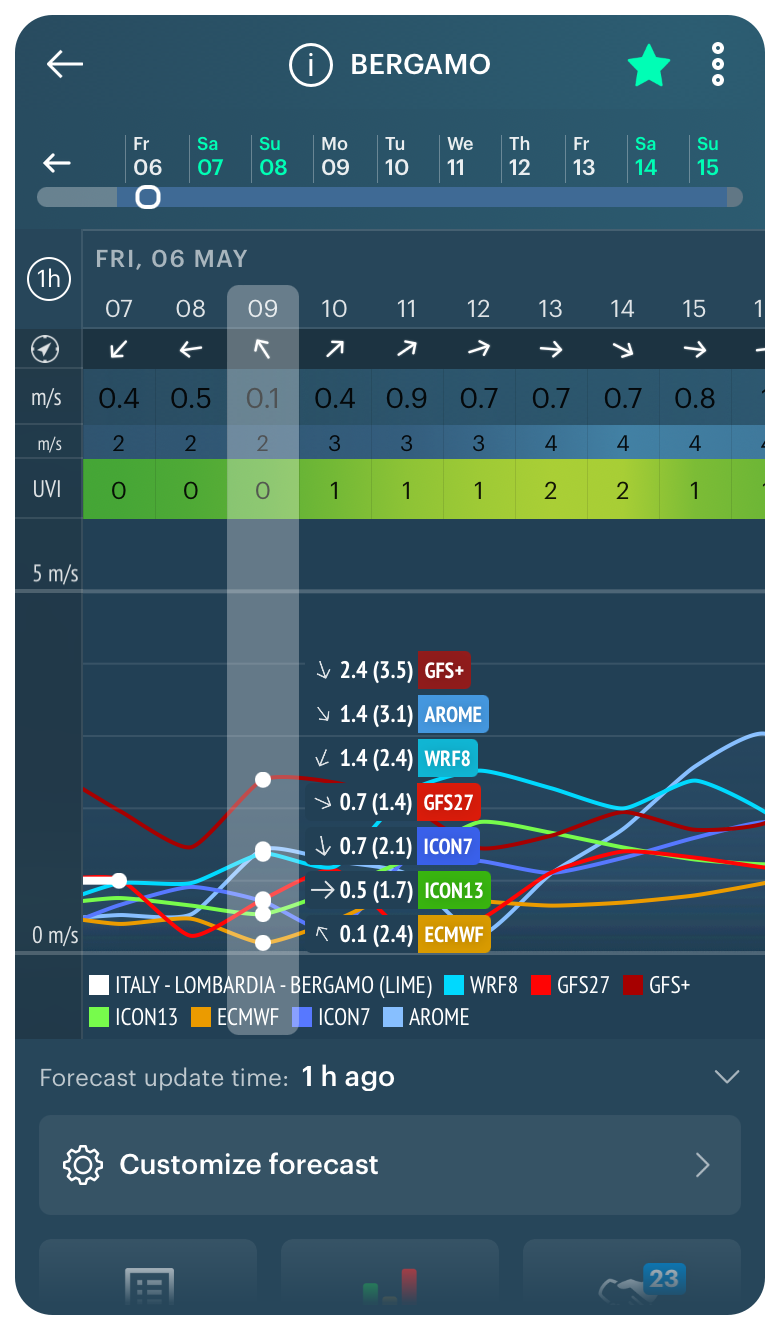 Wind direction, wind speed and wind gusts in the Windy.app for iOS

There are several measurement units of the wind:

Meters, kilometers and miles. The three aforementioned elements of wind — direction, speed, gust — are measured using three basic units: meters per second, kilometers per hour, or miles per hour. The former can be found in forecasts around the world, the latter in the United States and a few other countries that do not use the common metric system.

Knots. In forecasts, you can also find units such as knots, which are used to measure wind historically. One knot is one nautical mile per hour. The knot is used in wind forecasts for water and air sports because of the convenience of calculating the distance in the water and in the air in nautical miles, which is equal to one minute of the Earth's meridian.

Wind scales. In some wind forecasts, you can also see the wind value represented by one of the common scales. First and foremost is the Beaufort scale, which was used for visual wind measurements before modern instruments were created. But it has been used for so long that it is still quite common. 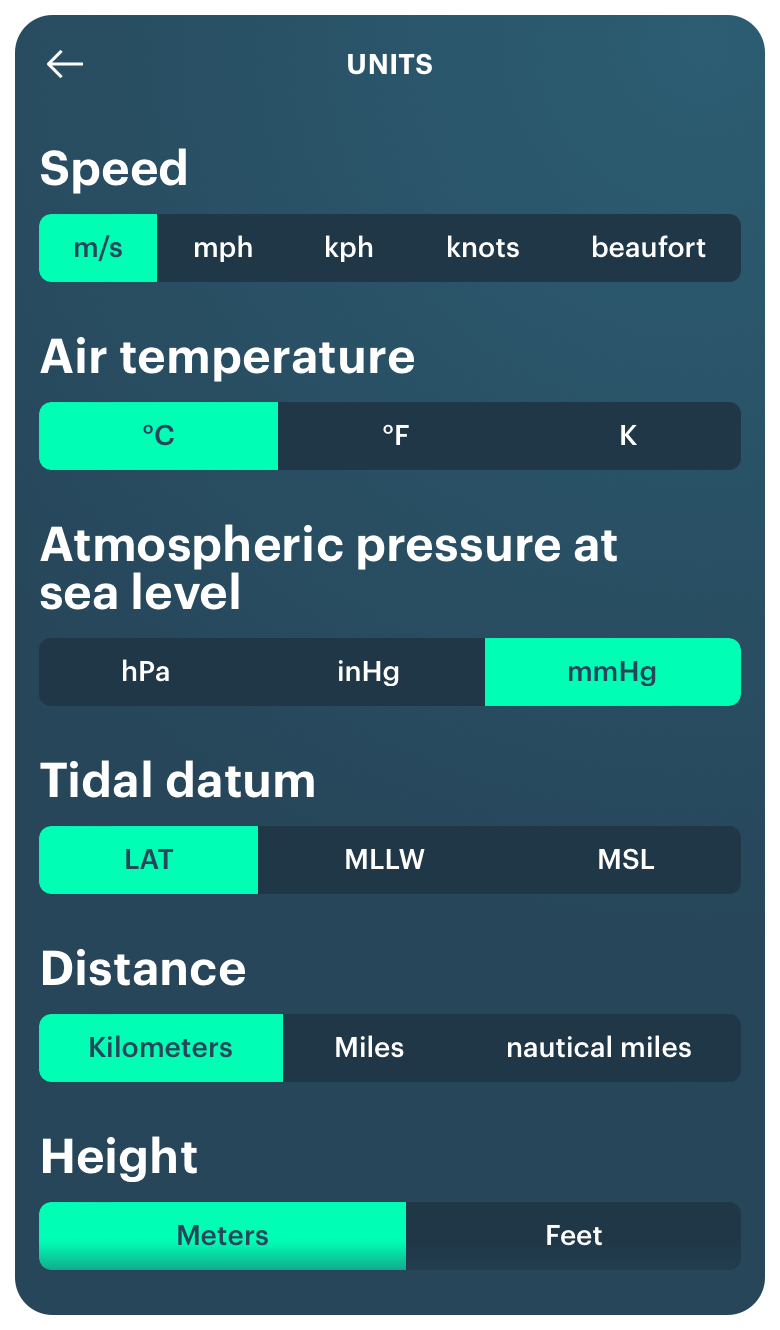 Knots, Beauforts and other wind measurement units in the Windy.app for iOS

The modern wind forecast is presented in more than one way. Depending on the source of the forecast you may see one or the other or a combination of them.

Wind symbols. As in the case of other weather elements, special symbols and icons are used to show the wind which is, however, should be intuitive. In addition to the arrows I have already mentioned, they can be wavy lines, interpretations of the letter W in the Latin alphabets, or something similar.

Color. The wind is also indicated by color. The usual wind scale includes the following colors in the following order: blue for no wind or weak wind, green for small and strong wind, yellow and orange for very strong wind, and purple and magenta for hurricane wind. But the scale may be slightly different from source to source. Wind color coding can be found in forecast tables and on maps.

Forecast tables. Wind forecast tables are the simplest, most common, and easiest way to display wind forecasts. A typical table is a few columns with the wind elements (speed and direction) and their values for a particular hour and day of the week. For example, tomorrow, May 6, at 11 am the wind will be blowing from the northeast (NE) at 5 m/s and gusting 10 m/s.

Wind map. A wind map is another popular way to present the forecast. On these maps, you can see the wind forecast for the whole world at once (in contrast to location-specific tables) which is very convenient. So the main advantage of a wind map is that you can see the big picture. Wind on maps is visually represented by moving interactive elements, colors, numbers, and letters — for example, when you click on a spot on the map, a window appears with the wind data for that particular spot.

Wind graphs. The wind is also often indicated in the form of graphs, where the direction is usually indicated by arrows and the wind speed is a smooth winding line on a timeline. The wind scales are also very common. 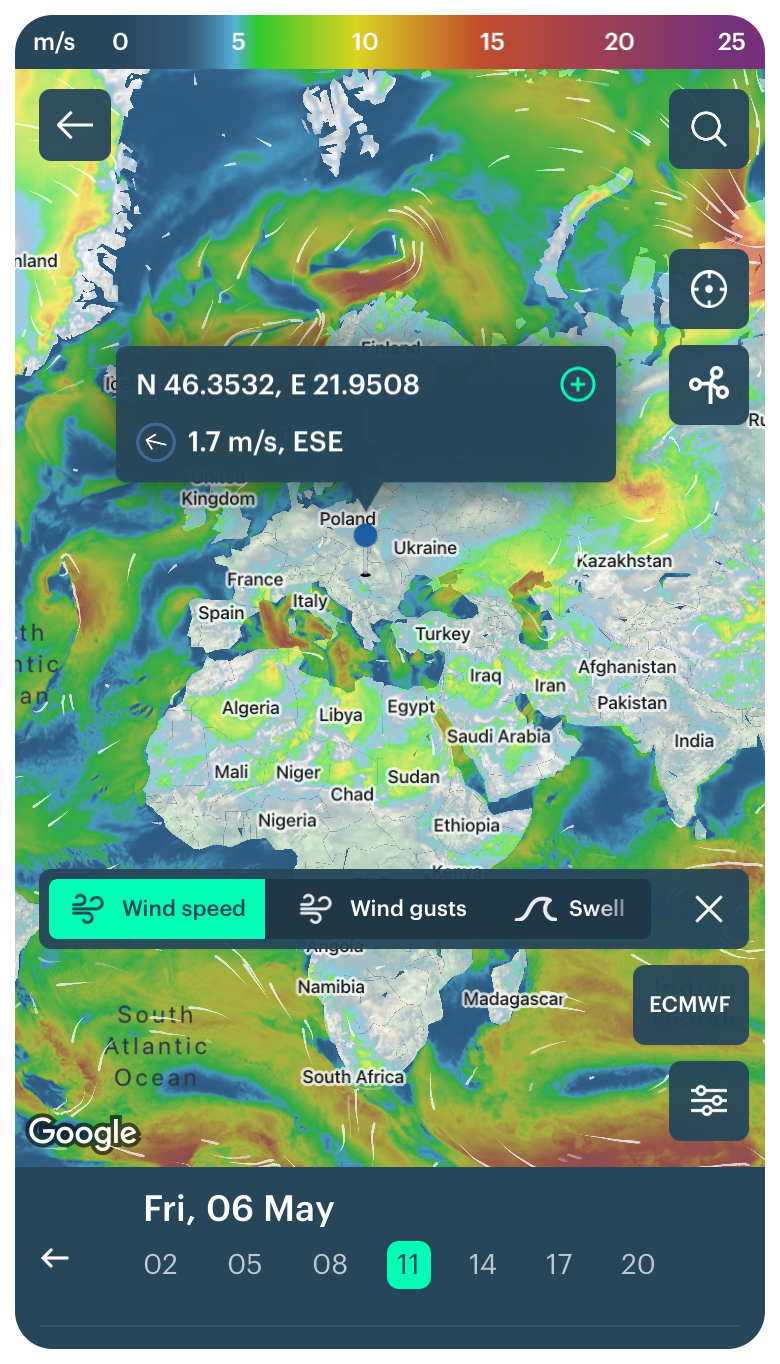 Live wind map in the Windy.app for iOS

In addition to the three basic elements of wind — direction and speed — in specialized weather applications such as the Windy.app or Windhub for yachting, you can find a whole set of advanced elements, as well as various indices, tools, and more.

Wind rose. First of all, there is the wind rose. A wind rose is a special diagram that shows which wind (and again, its direction and speed) is dominant for that particular point and for that particular time period. For example, in May in Atlanta, USA, the wind blows from the west (W) at a speed of 3 m/s on 15 days out of 30 days, that is 50% of the time.

Wind barbs. On the wind map, you can also find such an element as wind barbs. These are special icons that were used to indicate wind speed and direction on paper maps before the advent of electronic maps. Nevertheless as well as the Beaufort scale they still can be found in many yachting forecasts.

Isobars map. On a weather map, wind could also be identified with isobars, lines that show areas of equal atmospheric pressure around the areas of high and low pressure. Isobars that are close to one another mean high wind speed.

Wind chill. In addition to pressure, the wind is also related to temperature, which it affects. You’ve probably seen the feels like temperature element in the weather report yourself. So this is the temperature in relation to the wind chill effect. When the wind is strong, it’s lower than usual. That means you really feel 5 degrees Celsius because of the wind although the thermometer shows 10 degrees.

Winds aloft. Another special wind forecast is winds aloft. The fact is that the standard forecast is measured at an altitude of 10 meters above sea level. This is the altitude at which most anemometers and other instruments are installed. But the wind is measured higher up to thousands of meters where it is usually stronger and straighter because it encounters obstacles on the ground. This is the forecast used by pilots.

The list of extended wind elements is not limited to this set. We will continue to write about them in the blog and other sections of the site. 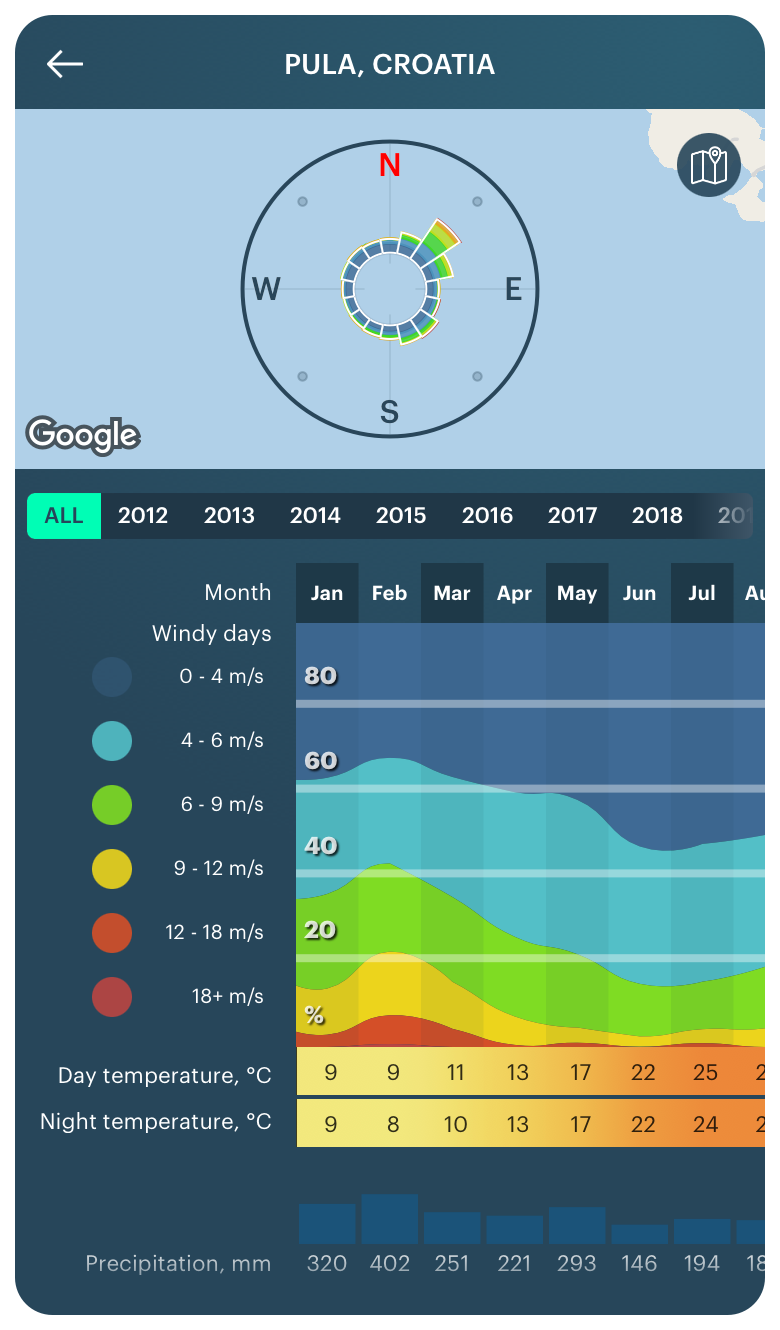 Wind rose in the Windy.app for iOS

Last but not least, as I noted at the beginning, wind can be of different types. First, all wind on the planet is divided into two big types, global winds, and local winds.

Glogal winds. The former, in turn, are divided into trade winds and monsoons. The main thing to know about them is that they always blows in the same direction: trade winds (dry winds) — from tropical latitudes to the equator, and monsoons (humid winds) — on the contrary, that is along certain routes, not chaotic, which means they can be predicted.

Local winds. There are dozens and hundreds of types of local winds. Local winds are not written in standard weather forecasts because they are very difficult to predict for weather models. Each of them also has its own character, so knowing them you can know in advance what to expect from them: where, when, how often, with what speed the wind blows, and so on. Local winds include slow breezes, strong mistral, cold bora, and many mountain and valley winds in certain regions of the world.

You can find out where and what local winds are blowing from many specialized meteorological, geographic, sports, and other sources of information, including the Windy.app newsletter and textbook, where we talk about different winds and more. 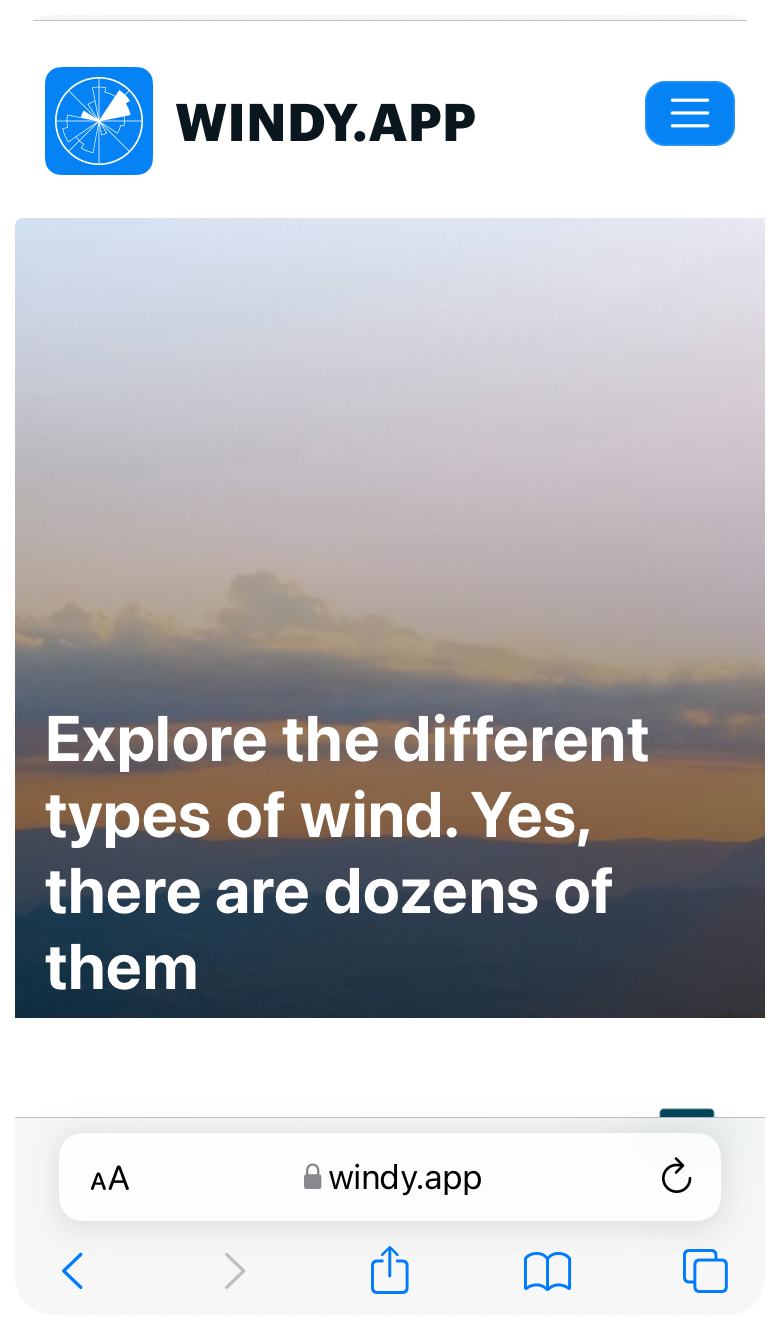 Lesson about types of wind in the Windy.app Meteo Textbook (WMT)

Where to get a wind forecast?

In the Windy.app, which was created primarily for wind sports and outdoor activities, you can find wind forecast throughout the application. We have even specifically calculated: you can do it in 35 different ways! But more importantly is that you can do it in no more than three clicks each time.

Learn more about how to get wind forecast in the Windy.app in a separate article, as well as about other things about wind in a collection of articles about this weather phenomenon.

How to read a swell forecast

How to read snow forecast